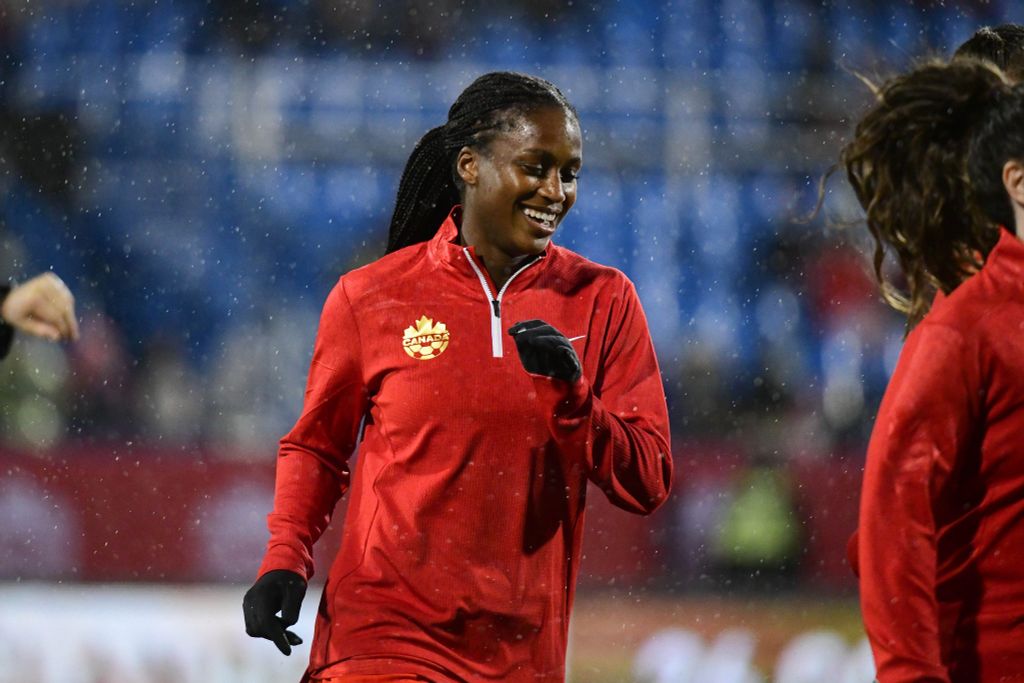 VANCOUVER – As the CanWNT continues its hunt to find more goals, could their solution lie somewhere in Texas?

That’s a question that Canadian head coach Bev Priestman will be pondering this week, and for good reason, as her team convenes ahead of their friendly with South Korea at BMO Field on Sunday, June 26th.

There, she’ll get a last good look at her squad before they depart for Monterrey, Mexico, where they'll partake in the 2022 CONCACAF W Championships, their opportunity to both qualify for the 2023 World Cup and 2024 Summer Olympics.

One player she'll be keeping an especially close eye on in this camp? 27-year-old forward, Nichelle Prince, who has stormed out of the gates for the Houston Dash this season, nabbing six goals and two assists in 14 games so far (all competitions), leading her to maintain her spot in the CanWNT squad.

And for a Canadian team who is trying to take a big step forward offensively this summer, those numbers are quite tantalizing, for good reason. Because of that, it's opened up a question - could Prince potentially be an ace up the sleeve of Priestman down in Mexico?

Here's a closer look at her numbers to see if that could indeed be the case.

Catching up on what I missed, great to see Nichelle Prince score ANOTHER goal today for the Houston Dash

Was such a well-taken tally, as well. Class dribble and finish

She now had 5 on the NWSL regular season

To start, it's worth pondering an important question - what has allowed Prince to thrive the way she has so far this season?

Especially for someone who had scored just eight goals across her first five seasons in the NWSL, with her best campaign seeing her find the net three times, how has she already breached the target six times in 2022, one might ask?

Has she been getting into more dangerous areas? Is she just finishing better? Has luck been a factor?

To get a better idea of the answer, here's a look at some of her numbers from the past few years, both in terms of counting stats such as goals and assists, as well as advanced stats such as Expected Goals (xG) and Expected Assists (xA), giving us a look of what has changed over time.

There, when parsing through that data, one clear trend has emerged this season compared to the last - Prince is finishing at an elite rate right now. 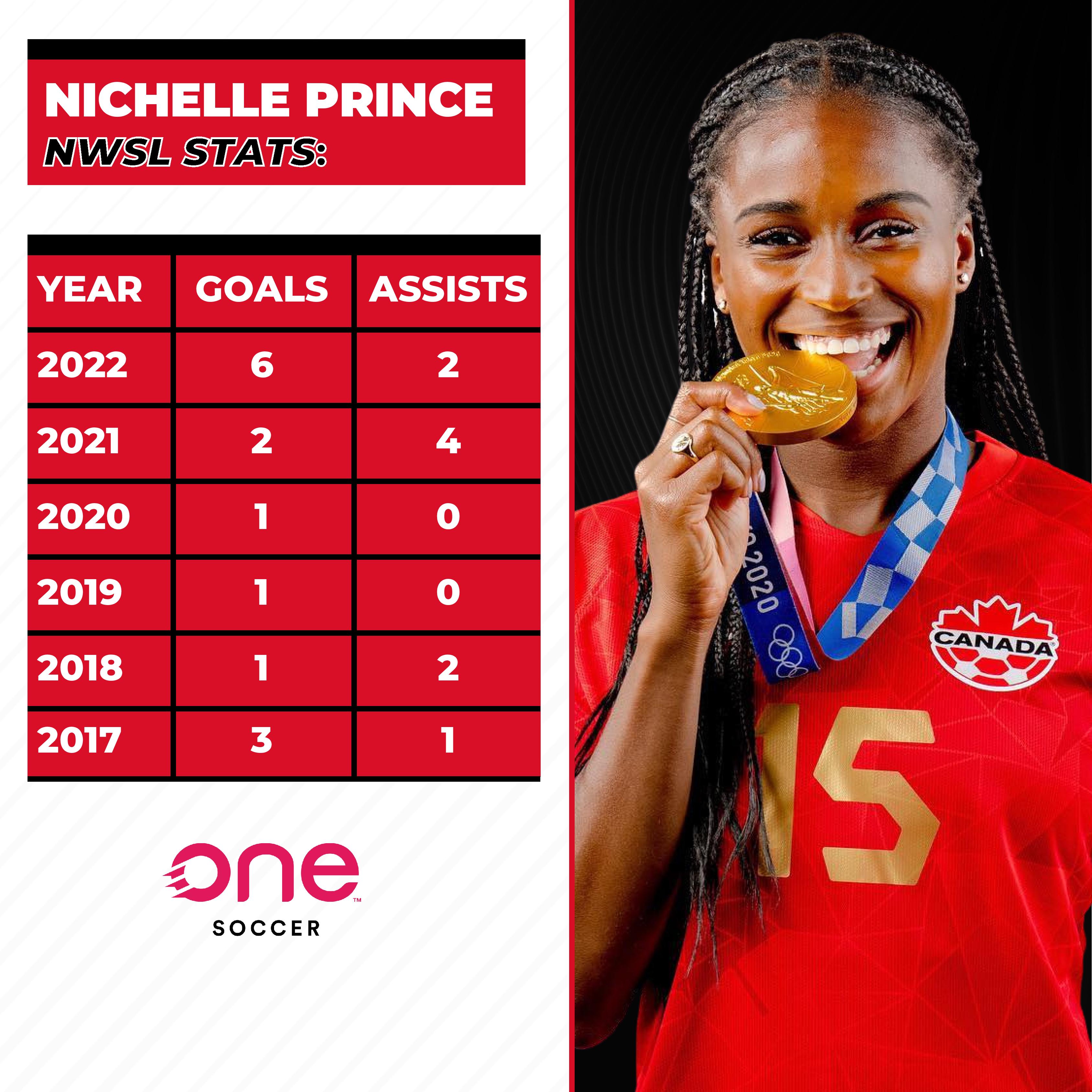 She might not be generating more chances than usual, sitting comfortably around her career average of 0.25 xG/96, and 0.15 xA/96, but she's scoring at a far higher rate than ever before, bagging an average of 0.51 goals every 96 minutes.

That is a rate typically reserved for the top forwards in the league, as only five players who played over 500 minutes last season in the NWSL achieved such a rate - Megan Rapinoe, Bethany Balcer, Midge Purce, Rachel Daly and Eugenie Le Sommer, and just a further six this year clear that rate so far - Alex Morgan, Mallory Pugh, Sophia Smith, Ashley Hatch, Debinha and Kristen Hamilton.

Yet, that just shows what kind of company Prince is keeping with her finishing right now, as she’s truly been ruthless in front of goal.

At the same time, the question can be asked - is it lucky? And at surface level, the answer to that question would appear to be clear - yes. Considering that she's doubling her xG, on just an average of 2.06 shots per 96 minutes (good for 30th in the league), it is fair to say that she's scoring at a slightly unsustainable rate, at least given those numbers.

But on the other hand, it's not as if she's pulling off miraculous numbers, either. A quick glance at her peers shows that her xG rate of 0.20/96 is in the top 40 of all players who have played a minimum of 500 minutes, so considering that there are 12 teams, that would suggest she is very much producing chances at the rate of a starting player.

Plus, it's not unusual for good finishers to get goals at a higher rate than their xG, so it's not as if Prince's good form is completely unsustainable, as given how consistent she’s been in terms of generating xG over her five seasons in the league, you could argue this is just a case of her figuring out how to finish those chances on a more consistent basis.

Especially if you see some of her goals, it's not as if she's been scoring any goals that might be hard to repeat, either.

In fact, other than a wonder-chip against Canadian teammate Erin McLeod, all of Prince's other goals have been 1v1 finishes and one header. Yes, you could argue that the amount of 1v1 goals she's had is something unsustainable, but considering her speed, which allows her to consistently find those sorts of opportunities, that feels sustainable, especially given how consistent her xG numbers have typically been each season.

So overall, it does feel like Prince can maintain these opportunities. As long as she continues to get into the same areas that she has been so far this season, finishing them at a decent clip, it's not out of the realm of possibility to imagine she keeps racking up the goals, even if her rate drops off a bit. 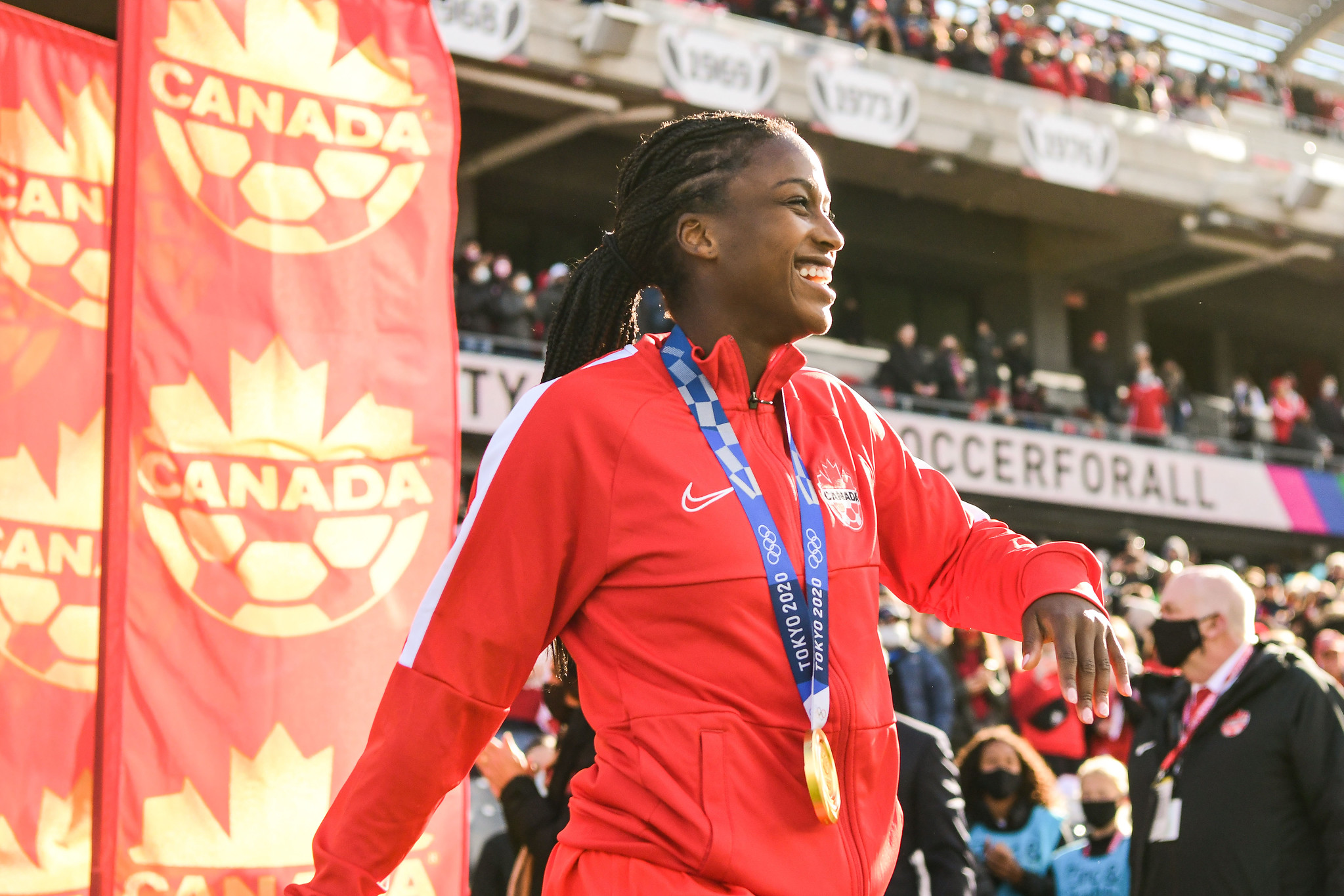 Where does she slot in up front for Canada?

For Canada, that's exciting, as you have to imagine they're hoping that she can now maintain that form with the National Team, who as mentioned earlier, are looking to score more goals.

So as they get set for what lies ahead of them this summer, the question is simple - could Prince be part of that solution? And it's most definitely something that will be up for Priestman to consider.

Having so far picked up 13 goals in 78 caps for Canada, Prince has been a solid contributor in her time with her country, but she's gone from a locked-in starter to more of a rotational piece in recent years, having scored just once since the last World Cup in 2019, where she bagged one tally.

Because of that, she's become a bit of a forgotten piece for Canada, going from a breakout player for Les Rouges at that tournament, to a bit of an afterthought in the Canadian forward discussion ahead of this summer.

But now, that most certainly has to be reconsidered. Not only has her recent hot run shown that she can maybe produce some of the missing goals that Canada is currently hunting down, but as she showed in Canada's gold medal run at the Olympics last year, where she started all of Canada's knockout games en route to gold, she can help your team in so many other ways than just goals, which gives her an edge in that discussion.

Be it through her pressing, her passing and her hold-up play, she's been a key name that Priestman has come to rely upon up front, even if she's found the net just once since she came in charge at the beginning of 2021.

Plus, with her ability to play in any of the three attacking positions, she has the versatility to slot in different roles, making her a lot easier to accommodate into the lineup, especially knowing what she'll bring on both sides of the ball.

So when you add in her recent hot run of form, it's definitely something for Priestman to consider, as she can lean on the usual reliable play that she brings, while also potentially expecting a bit more goal threat.

As a result, it's made Prince someone to keep an eye on ahead of this summer. Given her form, it feels like big things are coming for Canada, especially as they look for new solutions up front.

And right now, it feels like they have a potential answer to that question in Prince, who will now look to prove that, continuing what has been already a dream 2022 for the Canadian forward at the club level.