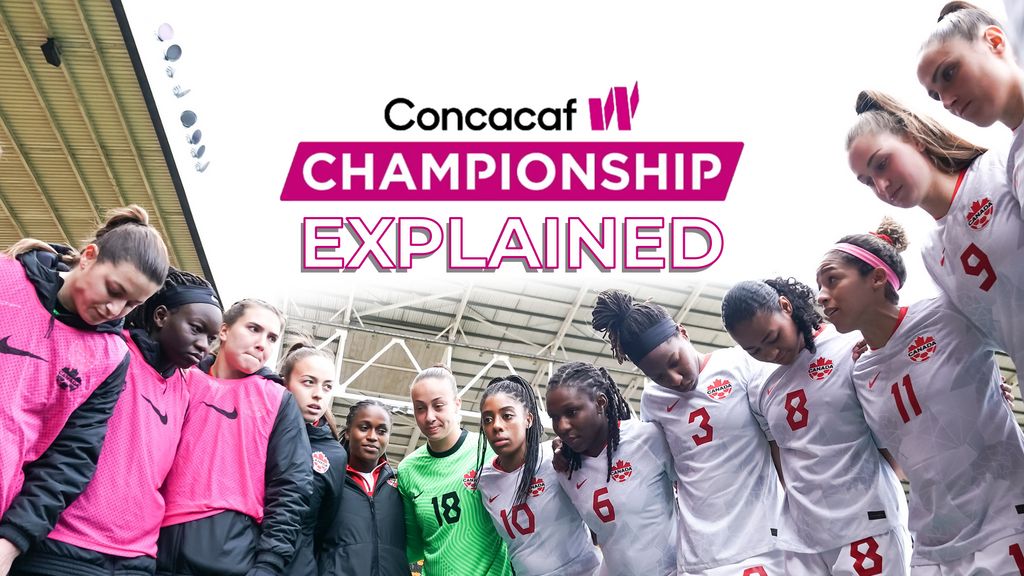 VANCOUVER – Quite the challenge awaits Canada down in Mexico this summer.

That, of course, is the new-look CONCACAF W Championships, set to get underway in July and officially kicking off the 2023 World Cup qualifying cycle for the Canadians Women’s National Team.

Once there, Canada really won’t waste any time getting thrown right into the fire. Plus, they’ll know that, over a span of 2 weeks, they’ll not only decide their fate for the 2023 World Cup, but for the 2024 Olympics as well.

For this Canadian side – fresh off an Olympic gold medal at the 2020 Tokyo Olympics – top performance is key, as such.

As Bev Priestman's side gets set for this CONCACAF W Championship tournament, they're also hoping to make sure that they aren’t caught by surprise.

It's why preparation matches against Nigeria – not a conventional top 10 team – is important for getting this team ready for whatever is thrown at them this summer.

“I think it’s a massive opportunity,” Canadian goalkeeper Kailen Sheridan explained this week while training in Vancouver. “I think that we’re going to hold ourselves to a high standard coming off of that Olympic gold, and we expect nothing but the best from our team.

"Going into (the qualifiers), it’s an opportunity to do both in one, and that’s great.” 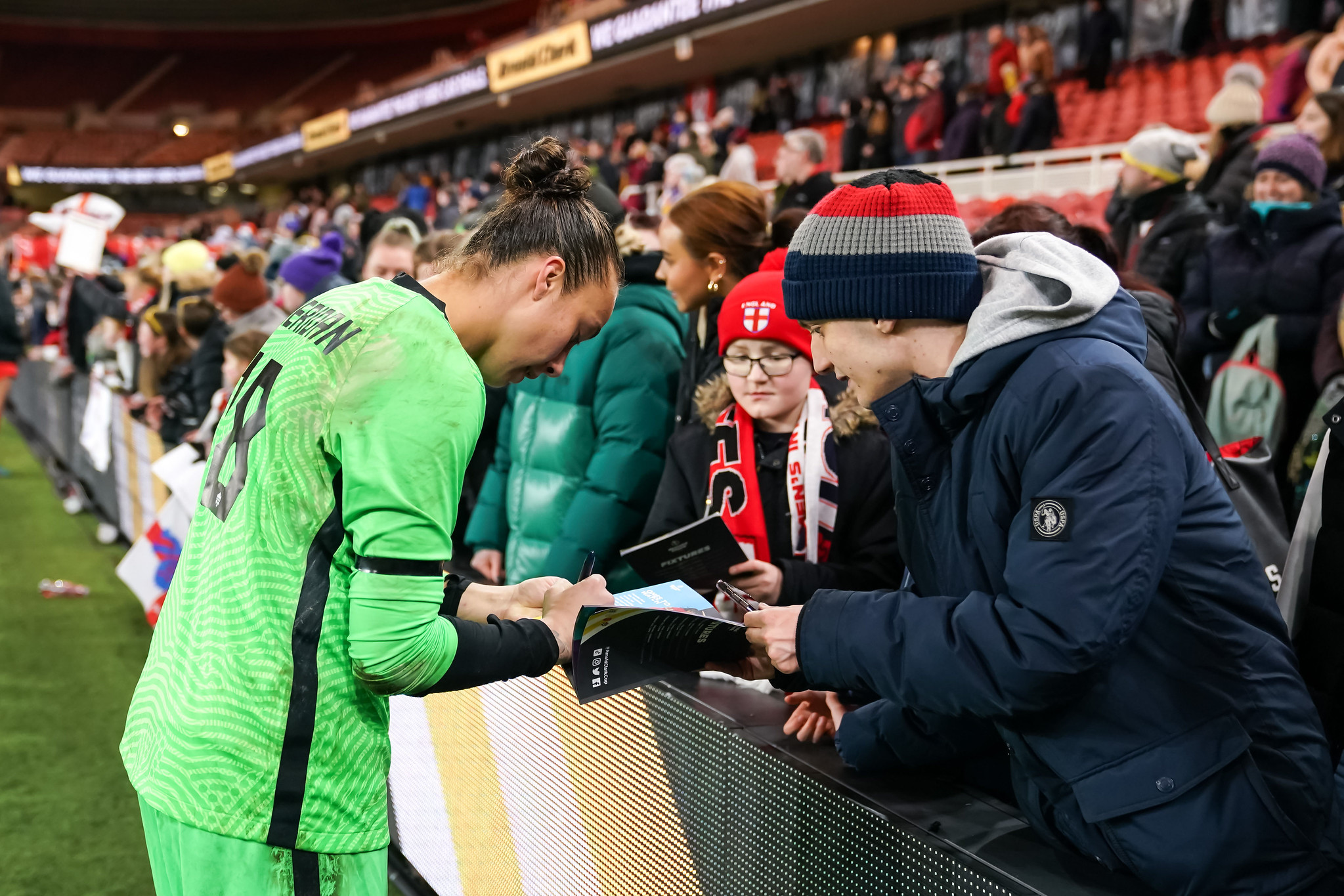 Before we get too stuck in on the somewhat-convoluted details of this tournament, let’s take a step back for a second.

How exactly will this all work for Canada down in Mexico; how can they both qualify for a FIFA Women's World Cup and the Olympics at the same time?

The two tournaments would be relatively identical, both consisting of 8 teams, split into two groups of 4 for a group stage, before leading into a semi-final, final and third place match.

For this cycle, however, due to the addition of a Gold Cup to the CONCACAF women’s calendar in 2023, Concacaf has decided to combine the two qualifying tournaments into this upcoming CONCACAF W Championship, while keeping the same format: 8 teams split into two groups of 4, a semi-final, final and a third place game.

Really, the sole big change is what’s at stake for the teams in this modified competition.

First, there’s the World Cup side of things. This one is quite simple; you make it out of your group and into the semi-finals, and you’ll be one of CONCACAF’s 4 guaranteed representatives at the 2023 FIFA Women's World Cup.

With this next edition of the World Cup expanding to 32 teams, CONCACAF is now up to 4 guaranteed places in the tournament.

But, failure to escape the group stage doesn't kill your path to the World Cup entirely.

You still have a chance to qualify as the two third-placed teams in either group will also go into the 10-team intercontinental playoff, where they’ll fight with 8 other teams for a chance at 3 additional spots at the World Cup.

So, finish in the top 4, and you're going to the World Cup. Easy. Finish third in your group, and you have another shot. Simple enough.

As for the Olympics, the path is quite similar; the team that wins the 2022 CONCACAF W Championship will book a spot at the 12-team Olympic tournament at the 2024 Paris games.

But instead of the second of 2 total spots in CONCACAF going to the losing finalist, there will instead be a playoff between that 2nd-place finisher and the team that finishes third at a later date.

The winner of that game becoming the region’s 2nd representative in Paris.

Need a visual of how all of that looks?

Here’s a handy graphic courtesy of CONCACAF, which also details how teams qualified for this summer’s championships (which every team in CONCACAF except Canada and the US had to do), as well as how the first two spots at the 2023 Gold Cup will be determined (the two Olympic representatives). 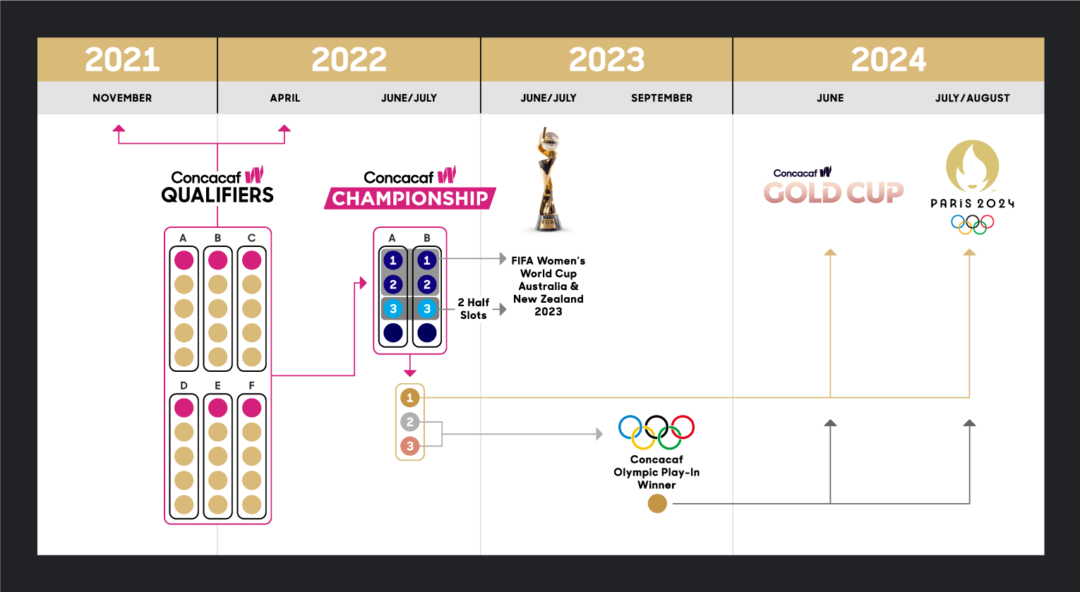 So for Canada, the mission is simple this summer - win the CONCACAF W Championship, and qualify for both the World Cup and the Olympics (and the Gold Cup, too)!

Or, at least, finish in the top three.

Based on what they’ve achieved as a team this past year, there’s no reason why this Canada can’t reach that goal, which is why they’re getting set to head into this tournament full steam ahead.

“Ultimately,” Sheridan said, “it’ll be about the standard of performance that we’ve set for ourselves. We know that we’re capable of it, and we know that we’ll achieve both of those goals.”

Added Priestman: “This new format gives us an opportunity. If we win that tournament in the summer, we qualify very early for the Olympic games, so it helps us map out our pathway.”