VANCOUVER – The first mission is complete for the CanWNT at the CONCACAF W Championships - now, they can focus on the bigger prize that lies ahead.

It wasn't easy, but the Canadian women's side have now successfully navigated the group stages of their qualifying tournament, emerging from Group B in first place on Monday as they beat Costa Rica 2-0 to finish the round-robin with a perfect 3-0-0 record.

Having already beaten Trinidad and Tobago 6-0 and Panama 1-0 to clinch a spot in the semi-finals, as well as at the 2023 World Cup, a lot of the heavy lifting was already done for Canada heading into their Costa Rica clash – but finishing in first place was still a priority, both for their pride and for seeding purposes.

And they showed as much in a solid performance, allowing them to head into the knockout stages in good form, sitting as one of the favourites to win it all, while also bringing home the trophy, Olympic berth and Gold Cup spot that comes with that.

To do that, however, they must first take down a solid Jamaican team in the semi-finals, before battling with one of the US or Costa Rica in the final, but given the pedigree of this Olympic gold medal-winning team, they'll feel confident in their abilities to do that.

But before they tackle that challenge, here's a look at what they'll want to take away from their group stage performance ahead of these bigger games that lie ahead for them.

At first glance, it wasn't a bad three games for Canada's attack.

It wasn't always pretty (well, a few goals were quite nice!), but they did enough to win each game, doing so while scoring a tournament-leading nine goals (a distinction they share with the US, it must be noted), answering a few questions that were asked of them heading into this competition.

Yet, despite that, a lot of other important queries also remained unanswered, because despite their goalscoring outburst, it's worth noting that five of those came in the last 30 minutes against a tired T&T side, as Canada otherwise struggled to break down their opponents in most games.

In fact, for a team that has faced a fair share of criticism about where their goals will come from, it has left more questions than answers as Canada gets set for these big games.

The good news, however? Canada did take a big step forward in their chance creation, generating 66 shots across their three games, including 24 on target, but they were often wasteful with those opportunities, with their finishing being more of an issue.

Before, a lack of chance creation would often be the issue, but throughout this year, that has changed significantly, which is a positive step.

Now, however, they must find a way to finish those opportunities, because if not, it feels like their wastefulness could cost them in big games. So far, their defence has been inch-perfect, leaving them to not worry, but that might not always be the case, especially in these games.

Three wins from three games, no goals conceded. Could the finishing have been better? Oh yeah. But ultimately it's the next two games that really matter, not these last three. #canWNT

Because of that, it's important that Canada finds a way to step up and take care of that in these next two games. In particular, they need to get their attacking players going, as just three of their nine goals have been scored by forwards, courtesy of Christine Sinclair, Janine Beckie and Jordyn Huitema, with their other six goals coming from midfield.

That sort of balanced threat is nice to see, no doubt, but Canada needs someone to step up and start to regularly finish some of the chances that the likes of Sinclair, Beckie, Jessie Fleming, Nichelle Prince and Ashley Lawrence have routinely been creating.

"I can put all the attention on the ruthlessness and the finishing," Canada's head coach Bev Priestman explained on Monday. "But the players know that the chances are there, and yeah, they could've had more, but that will come it will come with rhythm and flow."

Figuring out a best XI

Sticking on that theme of a balanced threat, however, it leads to the next point - Canada needs to figure out how to best manage that, especially in terms of the XIs that they put out.

There's no doubt that into about ~1.5 years of Priestman's tenure in charge that she knows her best XI when everyone is available, which looks something like this. 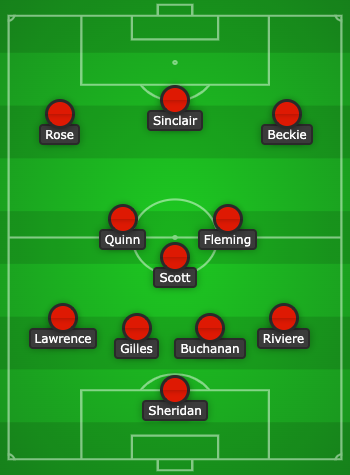 And while that is a very strong XI, one with a core that has been very successful for Priestman, there are also players knocking on the door at certain positions.

At the back, it feels like Shelina Zadorsky is always a shout at centre back, while in the middle Julia Grosso is certainly knocking on the door, especially after a three-game set that has seen her score a tournament-leading three goals despite starting two games on the bench.

Has Julia Grosso earned considerations for a starting role in the #CanWNT lineup?

Then, there is the attack, where Nichelle Prince is a wildcard, while the likes of Adriana Leon, Cloe Lacasse and Jordyn Huitema all offer different levels of intrigue depending on the opponent.

With some of those names really knocking on the door of Priestman's squad, with Grosso and Prince, in particular, having strong showings this group stage, it'll leave their coach with some tough decisions to make ahead of the semi-finals.

Of course, this isn't Priestman's first rodeo with this, having successfully rotated her squad throughout their Olympic triumph, but finding that balancing act between knowing who needs to be a "starter" or a "finisher" (in her words) is always tricky.

The good news is that either way, you feel like Canada has options on the bench (4 of their goals came from players who came in as subs), which is never a bad thing at all, provided they can continue to strike that balance. 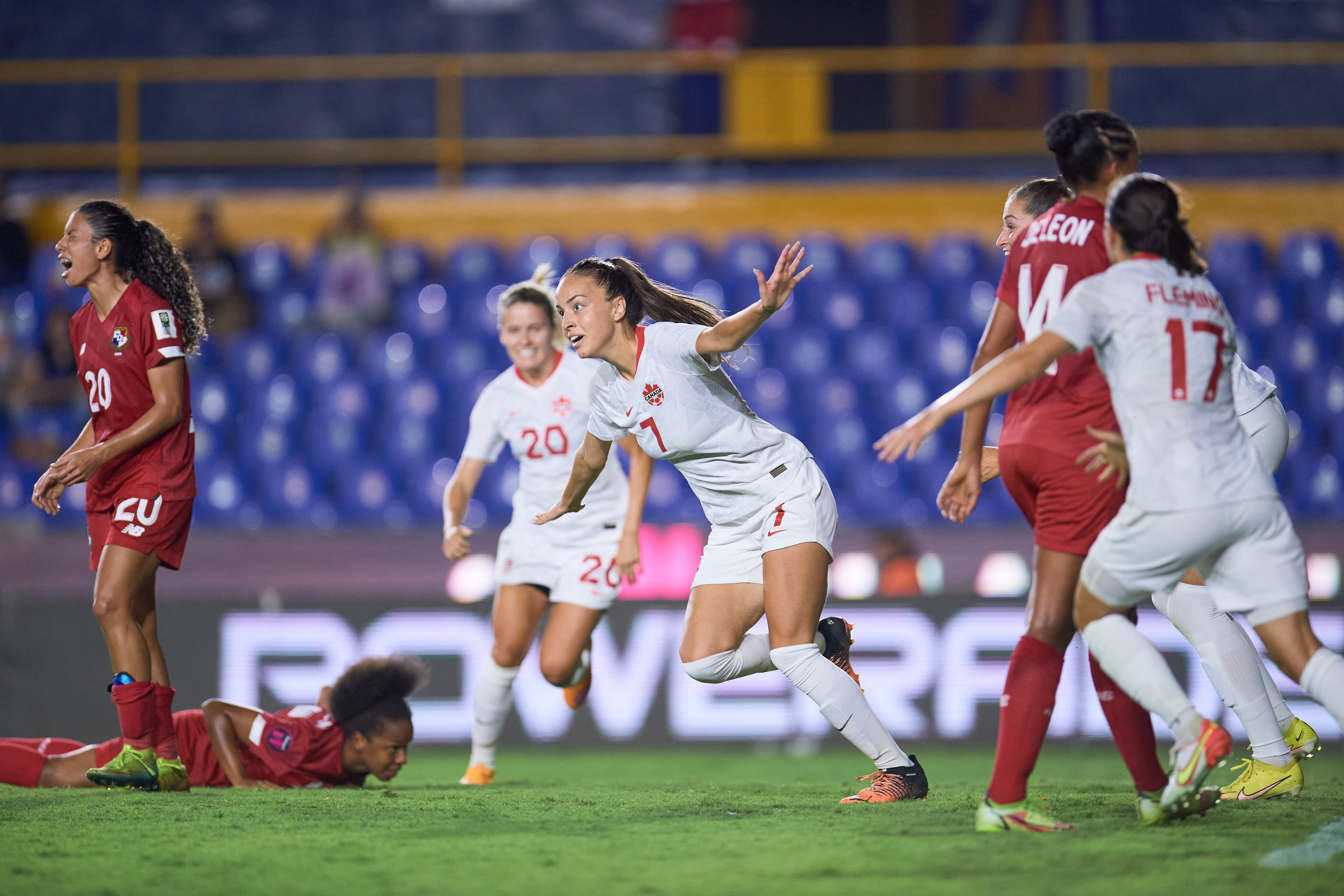 Can Canada find that next gear?

Yet, for all of the talk of tweaks to the XI, as well as strategies, there is a simple reality to face with Canada right now - they're still finding their top gear as a team right now.

It can be frustrating, as it's made for some mixed performances across the board, but it's not a bad thing, assuming they can find a way to really turn things up a notch in the knockout stages.

Considering that they rotated their squad a fair bit throughout these three games, all while managing the health of certain players and tinkering with certain tactics, they did well to pick up all three wins, which at the end of the day, is what matters most right now.

Of course, the performances themselves are important, but in games with stakes like this, just seeing things over the line is also crucial (just ask Mexico).

Yes, Canada must now find that next gear here, or else their methods will be called into action, but when looking at the overall picture, things look solid for now.

But hey, for what it's worth, Canada has done this before.

In fact, at last year's Olympics, they got through the group stages as a second-place team, winning one game and drawing two, before turning things on in the knockouts all the way en route to the gold medal.

Now, they'll need to turn to that magic once again, as they try and get back to those Olympics, but so far they're on track for their goals, even if they haven't traced out the sort of dominant path that some wanted for them to get to this point.

"I think that's the exciting thing," Priestman said. "I just said to the staff that this is just the start, it's not the end (for us).

"I think this team definitely has another gear (to hit)."