TORONTO – It's curtain call on the final auditions before the show for the CanMNT.

The next time they reconvene, the big dance will be right in front of them, as they get set to kick off the 2022 FIFA World Cup on November 23rd with a clash against Group F opponents Belgium.

All that stands between now and that opening game is a friendly against Japan in Dubai on Nov. 17, meaning Canada's staff and players will begin poring over all the lessons they've learned over the past two years and ramp up their final preparations to return to the world affair for the first time in 36 years.

They’ll have no shortage of intel from their latest window, either, as friendlies against Qatar and Uruguay over the past week gave Canada a taste of what World Cup opposition could feel like in November. That will undoubtedly prove valuable as head coach John Herdman focuses on his next task – selecting his final roster.

So, with all that in mind, here are the three biggest takeaways from Canada's September window.

Heading into this camp, these final friendlies offered a dual reality for Canada – a chance to prepare specifically for their World Cup opponents, while also getting a taste of the level of competition that they'll face in Qatar. Not a bad proposition for them to undertake.

So while they’ll now pore over what they can take from these two games from a tactical standpoint to prepare for Belgium, Croatia and Morocco, adding to their already lengthy preparation for those games, they can also now do so having gotten a taste of the level that teams will be playing at in Qatar, too.

As a result, there are a lot of learning lessons for Canada to take away from these games.

Overall, the first 20 minutes is what killed Canada. Otherwise, they grew into the game

Lots of learning lessons to glean from this one, in terms of shape, personnel and approach

Good test against a top team, though. That's a big plus pic.twitter.com/GUGixPpB0i

The biggest of which? They're not going to surprise anyone with the way that they will want to play.

That much became clear when Belgium's manager Roberto Martinez praised Canada following the World Cup draw in April, but this camp just further solidified that notion, as both Qatar and Uruguay played Canada with that sort of approach in mind.

Instead of trying to push Canada back into a low block defensively, allowing them to use their patented speed on the counter, both teams dared Canada to break them down in possession, reversing the scores there.

Because of that and unlike in CONCACAF where Canada ripped apart teams with their ability to break forward in transition, they were left to try and batter down the low blocks of Qatar and Uruguay, who were happy to concede possession and try to break themselves in transition.

What that meant is that Canada surprisingly held an average of just over 58% possession in these two games, something that they’re not used to doing, as they became the team who had to batter down a solid defensive block.

Then, from there, they had to deal with the threat of Qatar and Uruguay in transition, as those teams then tried to use Canada's strength against them. And to be fair, it worked rather well, too, as Qatar had some good chances in transition, while both of Uruguay's goals came off of set pieces that they won in transition moments, proving the validity of that game plan.

What that shows is that Canada will need to work on being prepared for these sorts of moments in Qatar.

Knowing teams like Belgium, Croatia and Morocco, who are both talented and tactical disciplined, they'll have done their homework on Canada heading into this tournament, with all of them likely eyeing Les Rouges as their 'easiest game' of the group on paper.

As a result, it wouldn't be a surprise to see them all try and dare Canada to break them down in possession, while making them defend in transition, much as Qatar and Uruguay did, trying to get them to step out of their comfort zone to try and get the advantage.

Canada's challenge will be finding a way to prove them wrong. As they showed against Qatar, they can have good moments when playing this way, and even if things weren’t as sharp against Uruguay, they played well enough to maybe get something if their execution was sharper at both ends.

If they can keep that up at the World Cup, they can once again catch teams by surprise, because if not, their original surprise factor will likely be gone, denying them of a key edge.

Yet, for one of the most tactically flexible teams in the world, you’d imagine Canada is aware of that, which is why it’ll be so fascinating to see how they tackle this challenge heading into the tournament proper.

For all of the talk of tactics and matchups in this camp, however, there was another important thing for Herdman to keep an eye on in these games - the performances of several of his players.

Both in terms of players who are looking to start and play a role in Qatar, as well as those who are just looking to get on the plane, this camp had a lot of players coming in with a point to prove, making those auditions just as important to monitor as the tactics.

And now, after this camp, there’s no doubt that Herdman’s task of selecting a final roster has gotten that much more difficult.

For example, the play of Ismaël Koné across both games has arguably seen him go from a fringe outsider to a lock for the World Cup, as he was very composed in possession, looked physically up for the challenge and added a different look to Canada’s midfield.

Three positives from today for the #CanMNT (in no specific order): Davies, Eustaquio, Kone.

I'm convinced the kid is going to Qatar.

Then, there was the strong play from the likes of Liam Millar and Theo Corbeanu off the bench as wingers, showing why there’s also a lot of discussion occurring regarding Canada’s winger depth at the moment.

Along with what wasn’t even seen on TV, such as the play of certain fringe guys in training, which by all accounts was strong, and there’s no doubt that Herdman will have a lot to ponder now.

Especially now with how things are set up for him, as he must name his final World Cup squad in the week leading up to the Japan game, he really doesn’t have much more time to test things out before having to make a final decision.

As a result, it’s now going to be intriguing to see how Herdman pieces together a squad following this camp. Assuming he takes the maximum of 26 players to Qatar (theoretically he could take just 23, but that doesn’t appear to be happening), there are probably still four or five spots for him to narrow down.

There, he has some questions to ask himself as he gets set to undertake that.

Firstly, how many centre backs, wingers and midfielders do you take to Qatar, given that you might need more players at some positions than others?

Do you prioritize the play of those who performed well in this camp?

What do you do about those who play strong at the club level over the next two months who weren’t at this camp?

How do you handle certain injury questions and the possibility that some guys might not be playing due to their team not being in the MLS playoffs?

All of those questions, and more, Herdman must now answer, but at the very least, he has a good base of 20 or so guys to rely on, so from there, those last decisions will be about narrowing a list of around 10 players into those six spots, which will be a fascinating endeavour for him to undergo. 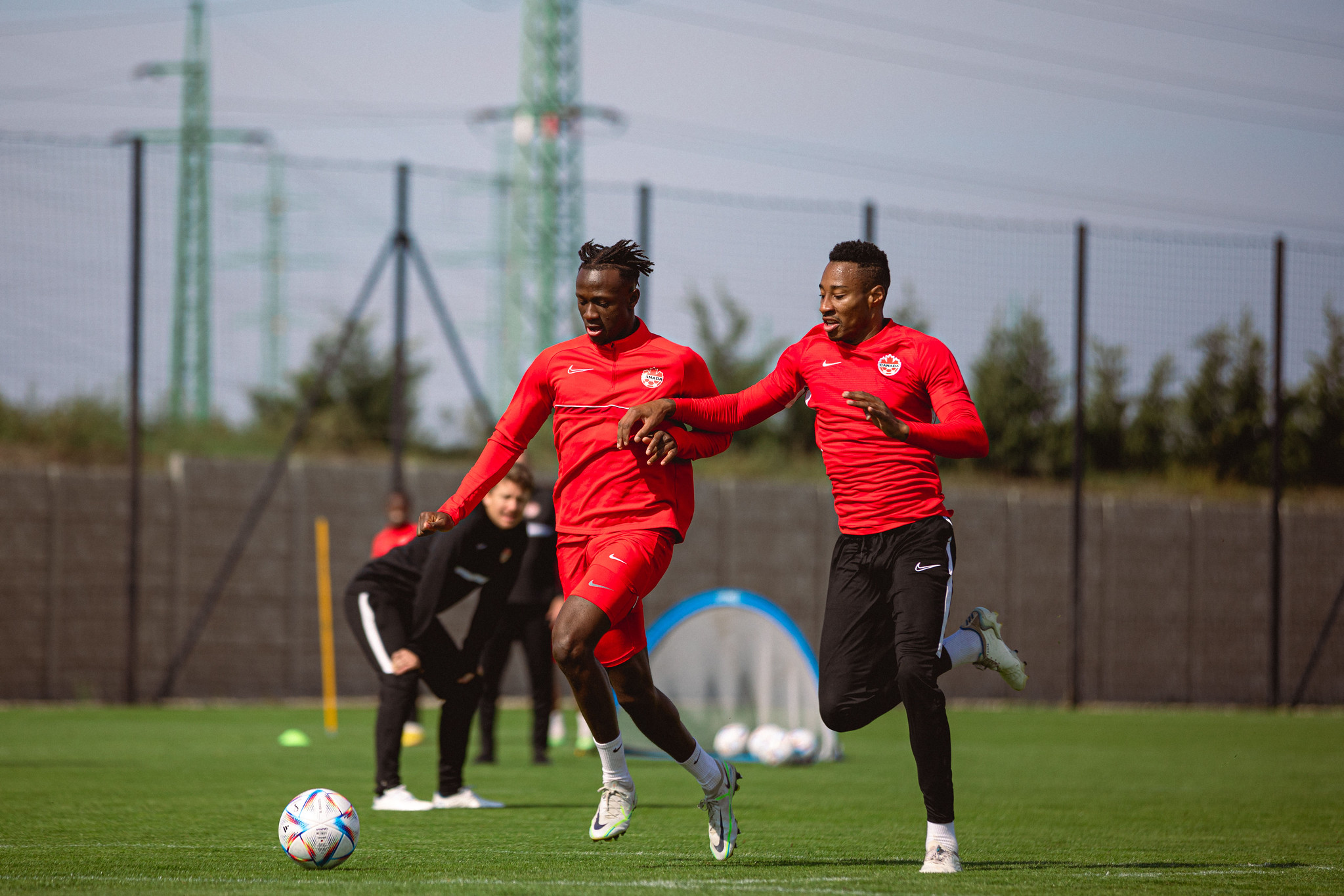 Tier-one players step up to challenge

Otherwise, the big news for Canada in this camp? The play of some of their best players in these games, as while the likes of Koné and Millar had good cameos off the bench, for example, some of Canada’s best performances came from their big players.

In fact, if you look across the two games, you can argue that Canada’s dangerous and most consistent players were Alphonso Davies, Jonathan David and Stephen Eustáquio, who all played big minutes in both matches.

To begin, there was Davies, who was everywhere across the two games, playing a central figure in Canada’s attack in what could only be described as a free role, finishing with two shots and six key passes in this camp.

Alphonso Davies seems to have been given creative license for Canada, and @joshuakloke believes he needs to spend the next few weeks learning from another Bayern Munich star 👀

Then, there was David, who as usual, scored a goal, pushing him up to second all-time for Canada, while otherwise generating all sorts of chances, finishing with five shots.

Lastly, there was Eustáquio, who was everywhere in midfield for Canada, playing a big role in possession as well as in defence for Canada.

And that’s key. Of course, as three of Canada’s best players, you’d expect them to shine, but to see them really lead the team is crucial as they get set for Qatar.

Arguably their three most in-form players right now, they are three of the four players that Canada currently has that fit a ‘tier-one’ description.

Why might that be important? Well, given that Herdman has stated that teams with more tier-one players tend to do better at the World Cup, having Canada’s tier-one players perform at a high level will only increase Canada’s odds in Qatar. Especially given that you'd expect guys like Tajon Buchanan, Cyle Larin, Junior Hoilett and Sam Adekugbe to step up as they did in qualifiers, having the big guns lead the way could be huge.

Therefore, to see Davies, David and Eustáquio shine in this camp as they did is positive, as you’d expect these three to shine on the biggest stage, doing what they can to try and help Canada surprise onlookers later this year.