With their announcement last week that they'd be playing Japan in a November World Cup tune-up friendly, the CanMNT have now finalized their planning ahead of their long-awaited return to the global tournament.

It begins during this upcoming September window, when Canada takes on World Cup hosts Qatar, as well as South American giants Uruguay, before finishing up with that Japan friendly in Dubai, all of which will lead quite nicely to their opening match of the World Cup less than a week later.

Through these friendlies, Canada hopes to be adequately prepared for the World Cup itself, where a stiff test awaits them in the form of Group F opponents Belgium, Croatia, and Morocco.

While Canada's pre-World cup lineup of Qatar, Uruguay and Japan offers plenty of intrigue, there are two questions to be asked of those matches. The first? Will the quality of those teams be enough to prepare Canada for their group? And, by extension, do those teams offer enough tactical similarities to those teams to help Canada be ready for what their opponents might throw at them?

Could Canada, for example, have potentially recruited some European opposition for these games, allowing them to get a similar test to Belgium and Croatia?

While Canada would've certainly liked to have done so, there's just the simple reality that wasn't going to be possible. In this September window, all of Europe's teams are tied up in UEFA Nations League play, while any November friendlies would've been tough given the tight schedules that some teams, particularly those in Europe, have between the time their players report to camp and when the tournament kicks off.

Having shocked CONCACAF in WCQs, John Herdman's now looking for the #CanMNT to shock the world in Qatar

In our latest Big Read, here's a convo with the CanMNT boss on that quest,🇨🇦's tactical evolution, dual-nationals and more

Plus, there's the reality that Canada isn't as big of a draw for a friendly – at least, not yet. That makes it hard to draw even non-European powerhouses such as Argentina and Brazil, for example.

That will likely change in the future, especially if Canada turns some heads in Qatar (as well as during these preparation matches), but it certainly impacted their ability to schedule those sorts of games in the present.

Therefore, while it might not have been the 'dream' wishlist of friendlies that Herdman would've constructed in a perfect world, to score games with 13th-ranked Uruguay, 24th-ranked Japan and 48th-ranked Qatar is not a bad alternative at all, offering pretty good similarities to 3rd-ranked Belgium, 15th-ranked Croatia and 23rd-ranked Morocco.

"First of all, there's no access to the European teams in this September window for us," CanMNT head coach John Herdman explained last week. "They're all involved in Nations League, (like they were) in June. And then when it came to playing them (before Qatar), the majority of their top players are playing right up until the last day before they have to report into camp, and then some of these teams are going to play earlier than Canada at the World Cup.

"So it's just been difficult to even get any European team around the table for a conversation, and obviously, they tend to pick and choose who they want to play when they're the top nations."

He added: "Yeah, we've gone into it in the best way we can with our wish list and their wish list, and again hopefully in two more cycles Canada becomes higher up other people's wish lists." 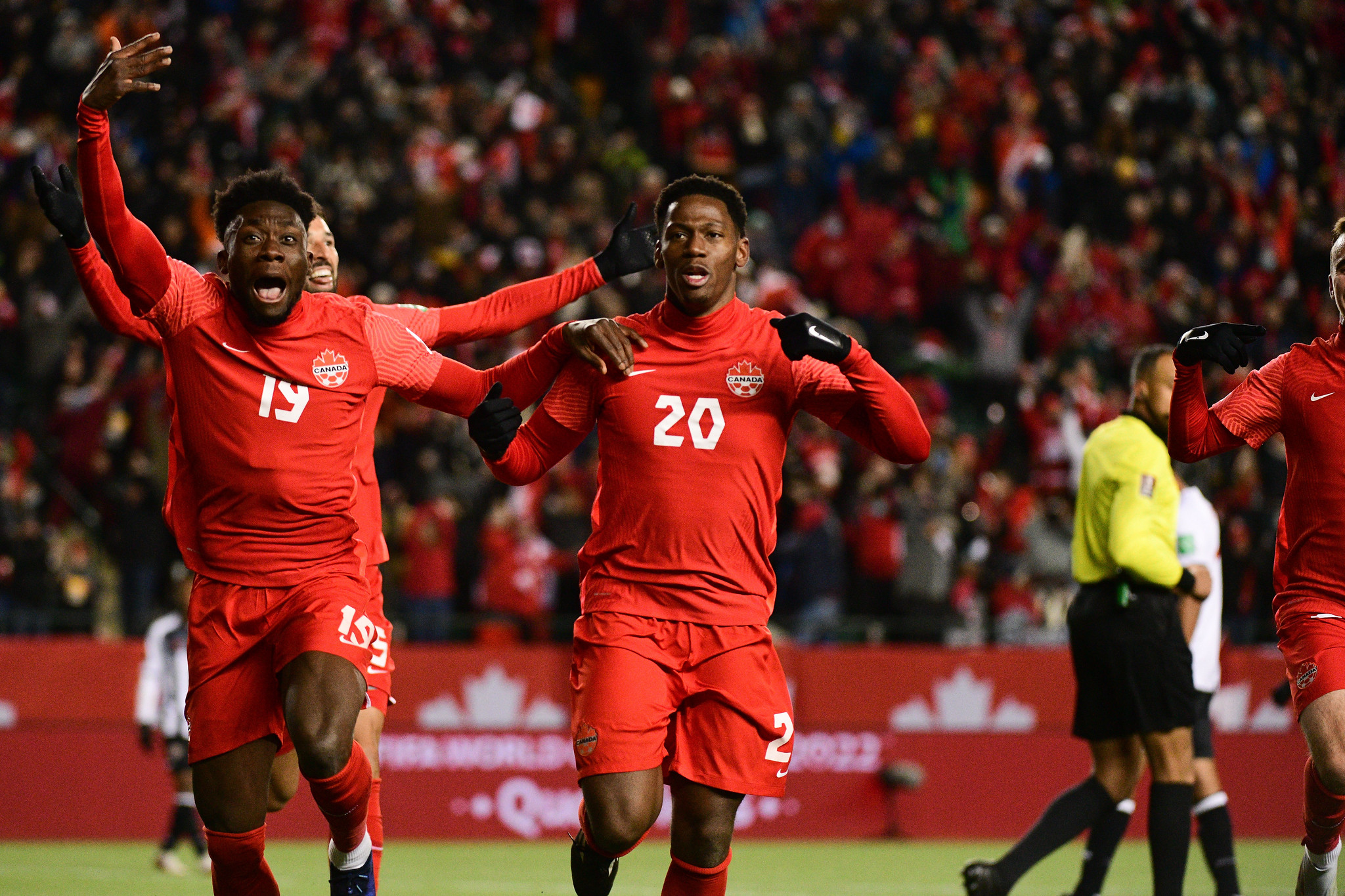 But while access to certain teams certainly limited their ability to organize certain friendlies, that leads to the second, and arguably more important question - will these teams be able to mimic Canada's group stage opponents, offering them adequate preparation for those upcoming games?

There, the answer is a bit more difficult to ascertain, as each of those six opponents are quite different tactically.

Still, there are some similarities to be found, especially between Canada's three friendlies and their three group stage matches.

To begin, there's Qatar, who typically play in a back three, and try to defend in numbers before striking in transition. They're organized, having played a lot of games together over the past few years, and are tested against a fair number of top teams, although their record is mixed.

There, they arguably mimic certain aspects of Belgium and Morocco, mostly the fact that both teams play back threes, with the big difference being that both teams love to hold more possession than Qatar, with Morocco loving to hold onto wide possession, and Belgium preferring to go central heavy in their possession.

Because of that, while Qatar's transitional threat won't be anything Canada hasn't seen in CONCACAF, they will be a good test in terms of Canada learning to attack a back three, something that Canada actually hasn't done all that often, considering that most teams in CONCACAF chose to go with back fours, especially those at the top.

Then, there's Uruguay, who are arguably the most intriguing friendly of these three. Not only are they the highest-ranked team Canada will play before the World Cup, but they're filled with tier-one talent, too, such as Darwin Núñez (Liverpool), Federico Valverde (Real Madrid) and Ronald Araújo (Barcelona), who headline a deep squad filled with players playing in top five European leagues and other solid circuits.

From there, they deploy those names in a defined 4-3-3, one where they're comfortable sitting in a strong mid-block, using their midfield solidity to absorb pressure before trying to funnel the ball forward through the middle to their attackers with sharp, direct passing.

Which, interestingly enough, is a very similar philosophy to Croatia, who much like Uruguay, has a lot of tier-one talent, mostly concentrated in midfield, and have used a similar recipe for success in how they both defend and attack, as they proved in wins over France and Denmark in their last window. As a result, Canada should get a good idea of what sort of threats Croatia could offer them in this game, making it one of big intrigue, and further showing why this Uruguay game is the most exciting of these three friendlies.

Lastly, there's Japan, who don't really mimic any of Canada's opponents, given that they play in a well-defined 4-3-3 highlighted by strong and fluid possession play, but what's nice is that their style of play will mimic certain aspects of Belgium.

Therefore, while there is no real preparation for facing the likes of Belgium's Kevin De Bruyne, Romelu Lukaku, Youri Tielemans and Eden Hazard for Canada, Japan's Takefusa Kubo, Takumi Minamino and Takehiro Tomiyasu are no pushovers, and will give Canada a taste of the sort of task they'll be up for when they don't have the ball against a team like Belgium.

So while these friendlies are not perfect in terms of the preparation that they will offer Canada for their group, it will offer some good learning lessons tactically, while also preparing Canada for the De Bruynes, Hazards, Modrics, Ziyechs and Hakimis of their group.

The #CanMNT have officially announced a pre-World Cup friendly with Japan, finalizing their plans ahead of their first match against Belgium

They play Qatar and Uruguay this month, Japan in November. Pretty darn good slate of games from a competitive standpoint https://t.co/FszvDVi8JG

Because of that, Herdman is quite happy with how things have been laid out for his team, and welcomes the challenges of these games, in particular Uruguay, which would make sense given how they appear to mimic Croatia.

Knowing that these opponents will not only test Canada with talent, but also their unique tactical profiles, too, it will ensure that his team can step outside of the CONCACAF comfort zone that they've lived in lately, especially when you realize that they've played just one non-CONCACAF team this World Cup cycle.

"We've done well with Japan," Herdman explained. "I think Japan's one of the top nations, (especially) given that they get out of the group stages quite consistently now, they have a really strong squad, and a good technical identity.

"We're still fighting for that respect, but I think we've got some good games here, particularly the game against Uruguay. I mean that was a massive coup for Canada to pull that one off in Europe, I know a lot of hard work went in behind the scenes to make that happen. So, you know, that's going to be a real test.

"And it's not necessarily a tactical test, it's a test of being the first time that we play a team of 400+ million dollars value. When you play the US, they're at the 250+ mark, so with this, you almost double that.