It’s been an exciting couple of weeks of action in continental European soccer.

Firstly, a congested men’s UEFA Champions League group stages wrapped up this week, as many of those clubs' top players start to get set for the World Cup. At the same time, the women’s Champions League also recently began, with their later start being a benefit of not having the schedule congestion caused by such a tournament.

As a result, the action has been coming fast and thick from all ends, including a week in which both the men’s and women’s tournaments overlapped, making for an exciting couple of days of soccer as many of the top teams in the world all faced off at the same time.

Especially for Canadian soccer fans, who got the chance to see nine Canadians see the field across both competitions in the past two weeks, it’s been a good time to follow those competitions, in which players can turn into household names overnight.

In fact, that phenomenon has been on full display as of late from a Canadian perspective, as some Canadians have seemed to take their performances to another level when they take the field in this competition, something that fans certainly won’t complain about.

A year ago, she was a senior at the University of Texas, getting set to make her final run at the NCAA College Championships.

Now, she’s out here putting in 90-minute shifts for Juventus against the current Champions League holders, standing out as one of the best players on a pitch that includes multiple-time Champions League winners, European Champions and World Cup winners.

Yet, this sort of thing has started to become the norm for the 2021 Olympic gold medallist, who is starting to carve out a path that is proving that her career is likely going to be filled with plenty of moments like her gold-medal winning penalty, instead of being defined by it.

CANADA YOU ARE FINALLY GOLDEN 🇨🇦🥇

But of those 895 minutes, it’s been 179 minutes that have stood out, in particular, and that’s been her first two Champions League matches of Juventus’s campaign.

Drawn in a tough group with Arsenal, Zurich and title holders, Lyon, Juventus has so far held their head above water, beating Zurich 2-0 on the road before picking up a home 1-1 draw against Lyon, allowing them to sit second through two matchdays.

A big part of their success in those two games? The play of Grosso, who has been a force in midfield for the Italian champions, putting up two strong performances across both games.

To begin, she was a key orchestrator in the Zurich game, completing an impressive 69 out of 75 passes (92%), while generating two shots, completing three dribbles, winning seven out of eight of her duels and adding a block and a tackle. Plus, she played a big role in Juventus’s second goal, too, which started with a great run from her down the left side, capping off an overall solid performance from her.

Then, she found a way to be even better against Lyon a week later, completing 43 out of 48 of her passes (90%), while adding two key passes, two shots, one dribble, three clearances, three tackles and winning seven out of seven of her duels. Not only that, but she just seemed to show this sort of composure whenever she was on the ball, too, serving as Juventus’s heartbeat in midfield.

Very strong showing for Julia Grosso against the defending #UCL champs, Lyon. In 90’, she had:

Considering the level of opposition, that’s no small feat, yet it just shows how much Grosso has progressed in her 10 months in Italy, in which she’s gone from a talented college prospect to an already-polished midfielder.

Typically one of the toughest positions to play, Grosso has shown no growing pains in adjusting to the top level, proving to be the sort of all-around force that teams tend to build around at that position. Truly capable of going box-to-box, she is comfortable in getting involved both defensive and offensively, as seen in her strong start to this Champions League campaign.

Playing as an #8 in Juventus’s 4-3-3, she often starts possessions by dropping deep, presenting herself as an option to play through between the lines, before turning and bursting forward if she receives the ball, where she’ll then look to progress play either through her sharp passing or composed dribbling. Otherwise, she’ll look to make deep runs, doing her best to at least present herself as an option, if not be a decoy for other teams to worry about.

Just take a look at her heatmap from the first two games to see how much ground she covers. 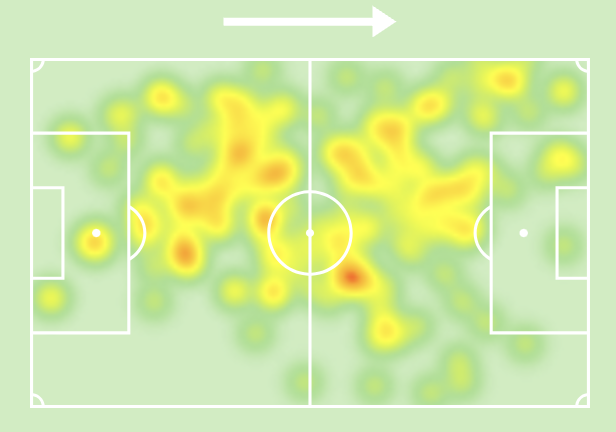 Then, defensively, she’ll track back vigorously, helping Juventus keep their shape off the ball, something that has allowed them to concede just nine goals in 10 games this season.

And that’s great news for Canada. Already a key piece of the team for the last couple of years, she’s already taken a huge step this year, going from a fringe starter to an arguable lock to play alongside Jessie Fleming in Canada’s new-look 4-4-2 going forward.

Therefore, it feels that given her rise to becoming a key part of this Juventus team, she’s just beginning to break out as a player, which considering that the World Cup is just around the corner next year for Canada, is good news, as any success that they have at that tournament is going to start and end in midfield.

After a bright start to his campaign with Porto, Stephen Eustáquio has not shown any signs of slowing down as the World Cup nears, continuing to put in big performances in the heart of his team’s midfield.

Just look at his play in the Champions League, where he helped lead Porto through an unlikely turnaround, as they went from the bottom of their group through two games to qualify for the knockout stages as group winners.

But while Eustáquio has been a bright light throughout this entire Champions League campaign for Porto, it’s been his last two matches that have been his finest, as he was a key factor in wins against Club Brugge and Atlético Madrid to assure his team’s qualification.

Despite entering that Brugge game on a bit of a low, having been sent off early in what proved to be a crushing 1-0 loss to rivals Benfica just days earlier, making it unsure if Eustáquio would even keep his place in the team given how costly that loss was to his team’s hopes, he didn’t let that affect him.

Instead, he went out and managed to quickly get his mind off that Benfica game against Brugge, getting back to the level that has allowed him to become a key part of Porto’s midfield in the first place. It took navigating some early scares to get there, as he picked up an early yellow card, and then encroached on a crucial penalty save from his goalkeeper when it was still 1-0, but once he found his feet, it was business as usual for him.

In fact, he ended up playing a crucial role in the rest of that game, scoring the third goal in a 4-0 win, one that assured Porto of qualification to the knockout stages.

A moment to never forget for Stephen Eustaquio, who scores his 1st #UCL goal to potentially send Porto to the knockout rounds

His 2nd goal of the season, it shows the offensive growth he's seen in his game this year for Porto#CanMNTpic.twitter.com/XGJWiBLQik

Then, he was even better against Atlético on the last matchday, putting in another shift in midfield, scoring what stood as the winner in a 2-1 victory, one that allowed them to top the group.

Much like the first, a great late run, and this time, he finishes with confidence for his 2nd UCL goal, and 3rd of 22/23

He remains in great form, which is great news for the #CanMNTpic.twitter.com/XtX1b4hgnQ

Through that, it allowed him to cap off a dream first group stage run for him in this competition, one in which he started every game, which considering that many didn’t expect him to play more than 100 minutes across the six games, shows how far he’s progressed the last few months.

Plus, as seen with his recent offensive outburst, he’s still finding ways to evolve, too. Having come to Porto as a destroy-and-progress #6, he’s continued to adjust nicely to his new role as box-to-box #8, one that has allowed him to still maintain the strong defensive skills that he’s known for, while adding some offensive splash in his game.

And with two Champions League goals to his name, as well as three goals and three assists total across all competitions, that growth is paying off big time for Eustáquio, who is going to start catching the eye of even bigger clubs if he keeps this up.

Just in time for the World Cup later this month, he couldn’t have picked a better time to do it, either, making it intriguing to see what he can bring to Canada later this month, especially given the success that he’s had in this new role for Porto.

While her bright start might’ve grabbed the attention of most, Grosso isn’t the only example of Canadians shining through the first two matchdays of the women’s Champions League, either.

Despite a slow start for PSG, who sit third in Group A with one point, Ashley Lawrence has gone back-to-back 90s for them against Chelsea and Real Madrid, putting up a player of the match level performance against Madrid in that meeting.

Meanwhile, Group A leaders, Chelsea, have gotten their six points off the back of strong performances from five-time winner Kadeisha Buchanan and Jessie Fleming, who played in both victories against PSG and Vllaznia, with Buchanan starting both, and Fleming starting against Vllaznia and coming off the bench against PSG.

Shifting over to Group C, there’s Vanessa Gilles, who is yet to see the field in the Champions League for Lyon, but recently made her return from injury in league play, meaning that a battle with Grosso remains in the cards for the pair when they meet later on.

Lastly, there’s Group D, where Cloé Lacasses’s Benfica sits last with zero points and a goal difference of -10, but despite that, Lacasse has shone, sitting as one of the bright lights in a 9-0 drubbing by Barcelona, before nabbing a goal and an assist in a 3-2 loss against Bayern.

Great run, and solid shot to finish, even if a bit fortunate

With 1 goal and 1 assist today, she’s been dangeroushttps://t.co/lVG87HG3z3

Because of that, don’t be surprised to see more strong performances from Canadians in the next four matchdays, especially after the bright start from many of them so far.

Otherwise, the CanMNT contingent in the men’s tournament has done well for itself, too, as all four active members in the group stages have made it through with their teams.

Of course, there’s Eustáquio and Porto, who won Group B, but he’s not the only Canadian to enjoy success in that group, either, as Tajon Buchanan and Cyle Larin’s Club Brugge finished in second, allowing all three Canadians to progress to the knockout stages from that group.

Elsewhere, Alphonso Davies and Bayern Munich cruised through Group C with six wins from six, with Davies finishing the group stages with an assist, as they continued to dominate this stage of the competition.

Therefore, these four will now turn their attention to the knockout stage draw early next week, in which Bayern and Porto will be in the group winners pot, while Brugge sits in the runners-up pot, with the only potential all-Canadian Round of 16 matchup being Bayern versus Brugge.