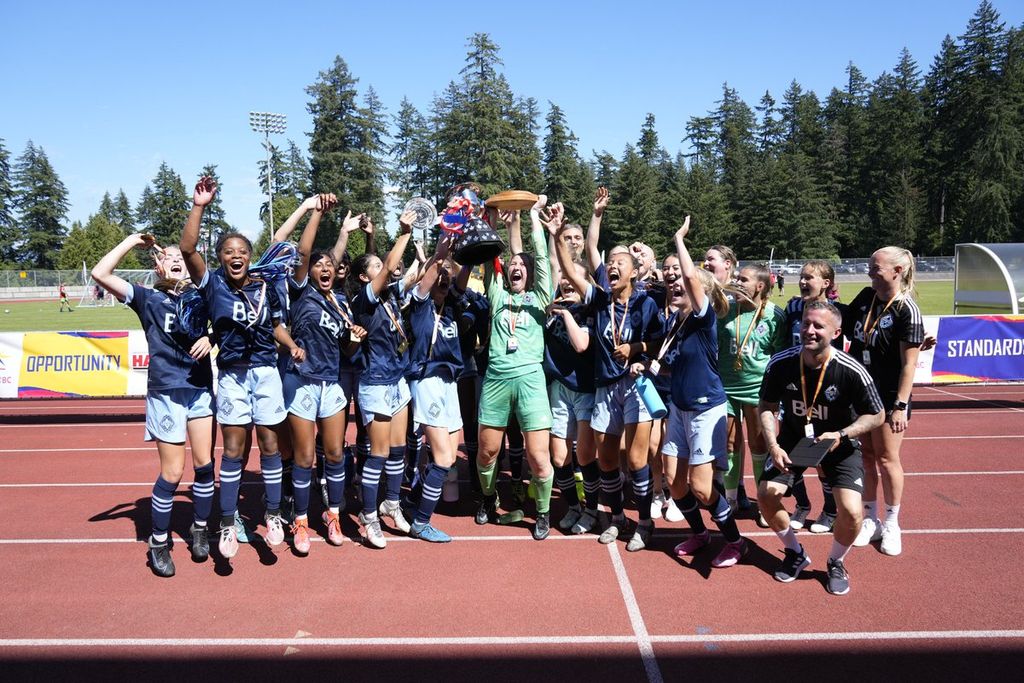 VANCOUVER – After a season filled with memorable firsts, the inaugural League 1 BC Final season came to a ceremonious end this past weekend.

Coming as part of a showcase event at Burnaby’s famed Swangard Stadium on BC Day, both the women’s and men’s division contested the finals of their respective leagues, marking the end of a successful first campaign for League 1 Canada’s newest semi-professional circuit in BC.

Capped off with two grandstand finals, in which the Vancouver Whitecaps women and TSS Rovers men ended up as champions over the Juan De Fuca plate-winning Varsity FC men’s and women’s sides, it made for a day filled with sun, celebration and top-level soccer.

Your League 1 BC Inaugural Women’s Champions‼️

Following in the footsteps of League 1 Ontario and PLSQ, two leagues that have provided all sorts of opportunities for some of Canada’s top men’s and women’s players, just having League 1 BC up and running was going to be a success for the state of the sport in the province.

Your League 1 BC Inaugural Men's Champions‼️

Congratulations to @TSSRovers going perfect in what was a dramatic penalty shootout scoring 5/5. What a way to end off the season. 🏆

You factor in the drama that the league was able to provide from start-to-finish on top of that, all while providing much-needed opportunities to players, and it doesn’t get much better than that, making it a successful first campaign for all involved.

“Getting anything started in soccer is a Herculean effort,” Dino Rossi, League 1 Canada’s president, told OneSoccer at the final this week. “They got it up and running here in BC, and it's been very competitive, very good soccer all year. I've watched a lot of the games on the live streams, and then to be here live today to watch two outstanding matches, it's fantastic and brings back a lot of good memories from when we launched League One Ontario many, many years ago.”

“And I'm sure that this league is going just upwards one direction, and that's upwards, so congratulations to everybody here.”

Yet, that was the goal when League 1 BC was first created. Having seen the lack of playing opportunities beyond the professional level in the province, it was felt that a new league was needed to bridge the gap that had been created, providing a further pathway for players looking to continue their soccer dreams.

Especially on the women’s side of things, where the lack of professional league in the country remains a huge obstacle for Canadian players looking to play the sport, the creation of the league provided some sorely-needed opportunities to players who have long needed them.

“Yeah, I think it's been an incredible year,” Whitecaps women’s coach, Katie Collar. “And I think it’s only going to improve from here, teams like Varsity, the TSS Rovers have done an amazing job of putting these teams together that can compete, that can push each other, and it really just helps develop the pathway for the women's game.”

“Now we're not done, we need a professional pathway, but at the end of the day, it gives these players another opportunity to keep playing at a high level.”

Of course, as Collar mentioned, the goal remains for these women to get a professional Canadian league to play in, something that remains a work in progress, but the success of leagues such as this one can only help prove the viability of certain models.

Especially seeing the level of play in just this first year of action, with the women’s division providing some fantastic matchups from start-to-finish, that does give investors a taste of the potential that is there in terms of women’s soccer in this country.

There’s a reason why Canada’s World Cup-bound U17 and U20 women’s teams are going to have a healthy League 1 BC flavour on it despite the relative infancy of the league, as those who have gotten a chance to watch have been quite impressed by how quickly things have come together.

Just ask someone who has seen her fair share of top-level professional soccer, CanWNT head coach, Bev Priestman, who took in the festivities on Monday, noting that she was quite impressed with how quickly the league was able to hit the ground running in year one.

“Yeah, I think what's been impressive is the standards, both on the pitch and also off it - there's been a turnout in most games that I’ve gone to,” Priestman told OneSoccer. “Plus, a lot of our youth national team players were out there on the pitch today, and when you learn how to win with something meaningful on the line, that's gonna help them at Youth World Cups and at the World Cup.”

“Plus, it also gives the opportunity for any talent that might be missed to be seen and, and scouted, so I think it's a fantastic platform. I think this was a great start, but we need to build on this towards a professional league, now.”

Before then, however, League 1 BC still has a big role to play, both on the men’s and women’s side, something that this first season did well to demonstrate.

Much as was the case with the creation of the CPL, there is a need for as many opportunities to get players playing as possible, granting importance to each avenue that becomes available.

Therefore, much as League 1 Ontario and the PLSQ have become pathways towards the CPL and beyond, League 1 BC is hoping to provide a similar opportunity for more players.

With some of the league’s players already attracting interest from the CPL and circuits abroad, too, they’re off to a good start, one that they’ll want to build off of.

“It’s important that institutions recognize this as a place for players to go,” Will Cromack, TSS Rovers men’s head coach said. “The players already know this is where the CPL is going to look at them, that MLS is gonna look at them, and I think that's critical because the players are going to drive it, not old guys like me, we're just going to be there to help coach them and tell them what this might all mean, but critical that we have this, and I'm so pumped it exists.”

From there, the sky's the limit for not just League 1 BC, but League 1 Canada as a whole, really.

Speaking about the future for League 1 Canada, Rossi was not shy in outlining his ambitions for what’s next there, noting that now he wants to bring those circuits across the country.

Having seen how League 1 BC was able to grow in its first year, he believes that there is no reason why provinces across Canada can’t embrace similar models, which is why he’s already laying the groundwork for more circuits to emerge in the coming years.

Through that, that will only further fill some of the gaps that remain in terms of playing opportunities in this country, helping Canada build towards the sort of sporting infrastructure that it desires as it constructs its identity as a soccer country.

As the momentum continues to swirl around the success of its men’s and women’s national team programs internationally, the pathways towards those respective sides continue to develop, with League 1 BC’s successful maiden voyage providing the latest of those avenues for players to aspire to undergo.

“Now, when we're going to bring this across the country, I think we're going to start to see this type of momentum that’s just like a snowball rolling down a hill,” Rossi said. “It's gonna pick up a ton of speed, so step-by-step we're gonna get there, we’re going to see great things in BC, and then we want to have that sort of thing across Canada.”