AlexGangueRuzic
Canada NT
Canada returns to action in October, taking on Argentina (Oct. 6) and Morocco (Oct. 10) as they continue their preparations towards the 2023 FIFA Women's World Cup next summer. Here's what to watch for!

TORONTO – After a short break, the CanWNT are back in action this week.

Bev Priestman's side gets set for a pair of friendlies against Argentina and Morocco in Spain over the next seven days, continuing their preparation for the 2023 World Cup with the clock slowly ticking away towards next summer's tournament in Australia and New Zealand.

Coming off of a September trip to Australia where Canada earned a pair of wins against the World Cup co-hosts, they now get a crack at two more World Cup opponents in October, with Argentina and Morocco sitting among the pool of 32 teams that will battle for global supremacy next summer.

Because of that, this month's window represents a great chance to try out some new ideas and refine the work head coach Priestman has already begun to lay out. Having learned a lot about her team back in the September window, she’ll look for her team to build off those lessons, especially with some familiar faces now returning from injury (check out the CanWNT squad here).

As Canada continues to hunt for more confidence-building victories, they face yet another tough task ahead, but one that certainly isn't too tall a mountain to climb. So, here's what you need to know ahead of a fun 180 minutes of action over in Spain, coming up on OneSoccer.

The September window was a big one for Canada.

A camp that was supposed to be about learning and growing in a pair of tier-one tests despite being severely shorthanded, Canada went out and surprisingly picked up two victories over the 12th-ranked Matildas, looking quite good while doing so.

One big reason for that? A slight formation change for the camp, as Canada went from a fluid 4-3-1-2 to a rigid 4-4-2, one that stayed compact and organized on both sides of the ball.

Instead of emphasizing numbers in midfield while having the two forwards split into the wide channels – and having Christine Sinclair interpret space underneath them as they did in the 4-3-1-2 – this new 4-4-2 puts a bigger emphasis on moving quickly up and down the field, with and without the ball.

Headlined by the new-look midfield pivot of Julia Grosso and Jessie Fleming (more on them in a second), and supported by more of a traditional front two, Canada looked more fluid and more direct in possession, while not sacrificing the defensive solidity they’re known for.

As a result, some new roles have opened up for this crop of Canadian players.

First, there’s the midfield, which has put more of an emphasis on two-way play, versus having different specialists. Look for someone like Quinn, who didn’t play much in the last camp as they were coming off of a knock, to also get a shot alongside one of Fleming or Grosso.

Out wide, where players are expected to be free on the ball but disciplined off of it, players like Adriana Leon in particular can now thrive. Because of that, it would make perfect sense for Janine Beckie, who had to play full back the last camp, to play in that role, as she is both creative and defensively disciplined, making her a perfect fit.

It's Adriana Leon AGAIN- Jade Rose gets her first senior assist and what a run it is to put Canada ahead!

Otherwise, there’s at the back, where there was a lot of rotation across two games, which should continue given the intrigue of some of the performances shown from less-heralded names, as well as the return of Kadeisha Buchanan and Ashley Lawrence (although Lawrence does remain an injury doubt).

Lastly, there’s the front two, which Jordyn Huitema and Christine Sinclair typically occupied, doing well to form a fluid partnership. Much more of a traditional forward role, they thrived in it, as well as subs Cloé Lacasse and Clarissa Larisey, who both had good looks off of the bench.

Therefore, look for someone like Évelyne Viens to get a look there, as she makes her long-awaited return to the Canadian fold, given her red-hot form over in Sweden this season.

Overall, though, there should be no shortage of opportunities for players to get a look in this new system, one that seems to suit the profiles of a lot of Canada’s players much better, giving them the sort of tactical evolution they’ve long needed.

Little of Canada's new evolution would be possible without Fleming and Grosso.

Heading into the September camp, there was a lot of talk about how Canada needed to evolve tactically, as they risked falling behind a lot of quickly-improving European teams, many of whom looked excellent at the European Championships. Meanwhile Canada looked a step off at times during their foray in the CONCACAF W Championship.

Of course, there were some positives with Canada's identity, especially when it came to how solid they've been defensively, but as seen in this recent evolution of the sport in general, just being good at one thing can only get you so far in the modern game.

Therefore, a big goal for Canada ahead of the World Cup was to evolve in how they progressed the ball forward, as their play in possession had become a big question mark.

To help change that, however, the double-pivot of Grosso and Fleming have stepped up wonderfully.

Having reliably stuck with a three-player midfield trio for most of her tenure as coach, Priestman decided to give this pair a shot in the first game of that September camp. It was a surprise, given that neither of them are true defensive stoppers – something that Priestman usually likes to have on the field in some form be it with Quinn or Desiree Scott – so you could be forgiven for being intrigued about how this new duo would adapt, on both sides of the ball.

The answer? With no problems whatsover, it seems, as the two were dominant in midfield, helping Canada play quick, progressive and direct in midfield, while not getting caught out defensively.

Also, adding to this *again*, the Jessie Fleming and Julia Grosso pivot, in particular, is something to watch long-term

The ball progression those 2 have is huge

That partnership could allow a back 3 (Buchanan/Gilles/Zadorsky?) or an extra body in the attack #CanWNT/#CanXNT https://t.co/50yOqZukdg

What they lacked in pure defensive skills, they made up for with a willingness to track back and, coupled with good defensive IQ as a foundation, they brought new dimension to Canada's attack out of midfield – so, a fantastic trade-off.

Canada used to be a team that would see the ball get stuck in the middle, forced to recycle laterally and backwards ad infinitum; Fleming and Grosso did a great job of funnelling the ball to their wide players and forwards, breaking lines as often as possible in possession.

This change also served to destabilize the Australia midfield, which is exactly what you want from a midfield duo, making it a resounding success. So while Fleming and Grosso only got around ~90 or so minutes together across the camp, they significantly altered Canada's tactical make-up when paired together, giving Canada the look of the sort of modern team they’ve long said that they want to become.

Because of that, look for them to develop that partnership further in this camp, as it could be the shift that Canada needs to take that next step ahead of next year, making it imperative that they continue to push that forward in camps to come. 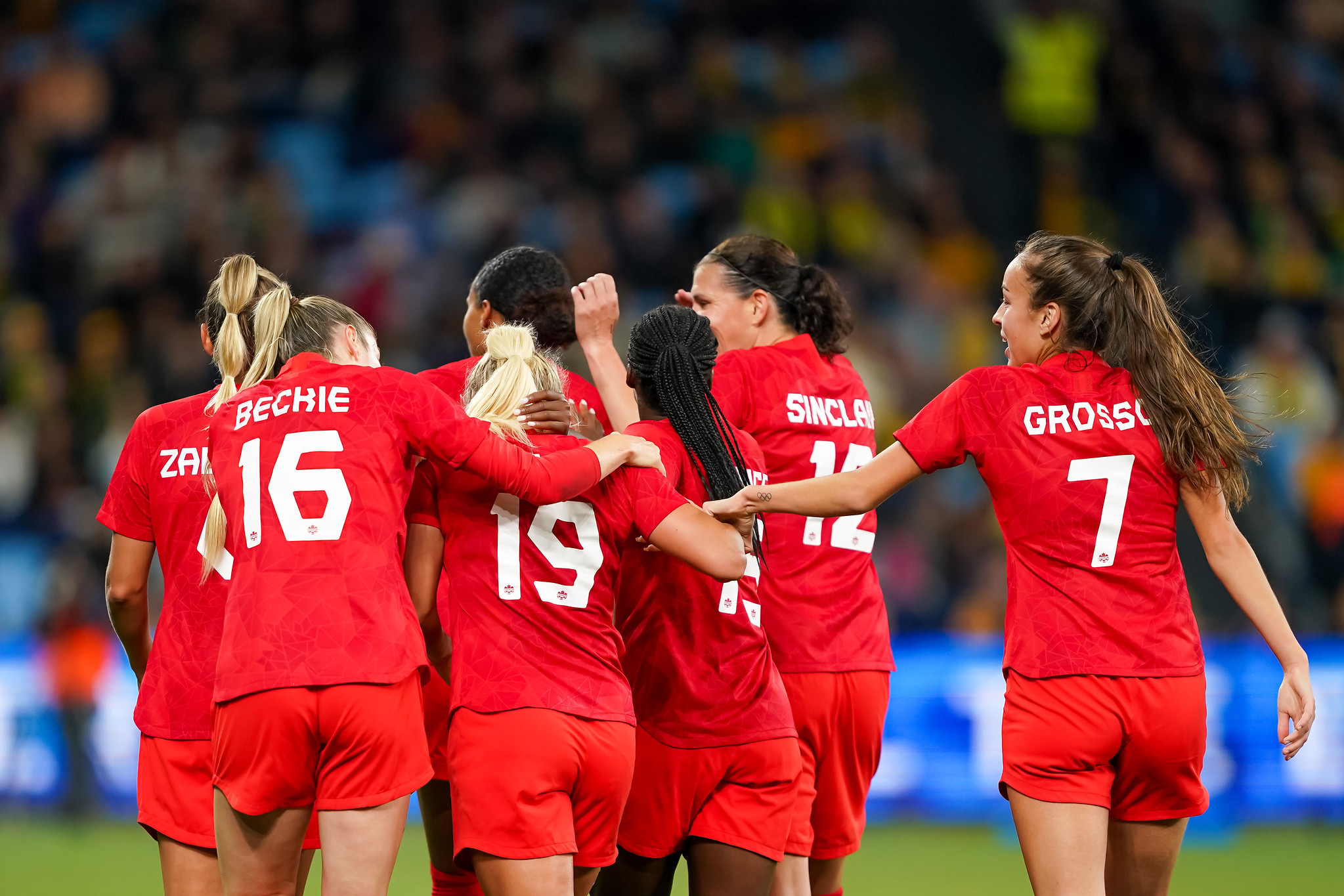 Can more new faces step up and shine?

While it's never a positive to be missing as many regulars as Canada was in the last camp, there was still a silver lining to how shorthanded they were – it allowed a chance for some new faces to shine.

So although it hurt to be without the likes of Buchanan, Lawrence, Vanessa Gilles and Deanne Rose (the latter of the two remain out for this camp), it meant that some different players earned an opportunity to impress.

For example, despite having just one cap heading into that camp, Bianca St-Georges was excellent at full back for Canada, putting in a shift on both sides of the ball. Then, there was Simi Awujo, who despite being 18 at the time (and having just turned 19), looked composed in her debut off of the bench, earning her a call back into this camp.

Then, there was the biggest performance of them all – 19-year-old centre-back Jade Rose, who, in the second match, earned an assist and shut down one of the best forwards in the world in Sam Kerr, putting up a player of the game performance.

Not many players can say that they shut down one of the best players in the world and then assisted the winning goal.

You throw in some solid cameos from Clarissa Larisey and Cloé Lacasse off the bench, and there were overall a lot of good performances from some new faces in that window.

Because of that, it’ll be interesting to see how much of that occurs in this camp. Of course, it’ll be harder with the return of some regulars, but with some players still out with knocks, there was room for the likes of Jade Rose, St-Georges, Awujo, Lacasse and Larisey to return, meaning they’ll all get more chances to impress.

Along with the return of Viens, as well as the addition of once-capped Zoe Burns, there will be no shortage of newer faces trying to impress Priestman once again in this camp.

And considering how that went the last camp, that’s not a bad thing at all, helping keep the race for World Cup roster spots competitive, something that can only help Canada as they continue their quest to prepare for that tournament.