GANGUE-RUZIC: Is Évelyne Viens the missing puzzle piece in the CanWNT attack?

TORONTO – Might Évelyne Viens be a secret offensive weapon for the Canadian women's national team ahead of the 2023 FIFA Women's World Cup?

Currently tearing up the Swedish league on a weekly basis with Kristianstads, the Canadian striker has certainly sparked that discussion as of late, as her strong offensive form has led to all sorts of surrounding her name in Canadian circles.

Especially after she narrowly missed out on Canada’s CONCACAF W Championships squad, left to watch from home as Canada battled for a spot in the World Cup and the Olympics, that discussion has only ramped up, as the age-old question looms - who will score goals for Canada going forward?

And in Viens, Canada has someone who can certainly fill that description, making it intriguing to see what role she plays in Canada’s squad going forward, as she makes her long-awaited return to the team next week for their October camp.

For all of the excitement surrounding Viens’s absurd production in Sweden, where she currently has 20 goals and 9 assists in 24 games this year (all competitions), it’s worth noting that this is nothing new for the 25-year-old.

If there’s one thing that the striker does, it’s to fill the net, something that she’s done a lot of at the professional level.

First, she burst onto the scene as a pro when she was on loan from Gotham FC to Paris FC in D1Arkema back in 2020, scoring 11 goals (all in open play) and adding two assists in just 14 games (seven starts) in the French top flight.

Despite that performance, however, which came in the top-ranked league in Europe, she wasn’t able to find her feet when returning to Gotham in 2021, however, playing just 13 times (3 starts) that season for a total of 319 minutes, in which she was only able to find three assists (although she did score in the Challenge Cup for Gotham earlier that year).

Therefore, it feels like this return to form in Sweden this year is a closer indication of what Viens can really do offensively. When she’s played over the past few years, she’s scored goals, doing well to build off of a college career in which she scored a whopping 73 goals and added 23 assists in 77 games with the University of Southern Florida.

Seeing that she’s mostly kept pace with those numbers at the pro level, as well, there’s no doubt that she’s someone who has the ability to score, and can do so at a high level.

Plus, she’s more than just a poacher, too, as her assist numbers suggest. Of course, as a striker, her focus is to score goals, and she’s certainly a shoot-first player, but she also does a great job of bringing her teammates into the action, capitalizing on the space that she can open up on the field.

Because of all that, there’s a lot to like with Viens’s game right now. Both in terms of the goals, as well as her hunger to improve, it feels like she still has another gear to hit, something that she’s spent a lot of time in Sweden trying to hone in on this year.

"I've been trying to work on different areas of my game," Viens told Radio-Canada this week. "Working with the coaches on my finishing, my touch, my creativity, my confidence, the mental side of the game, it has been great." 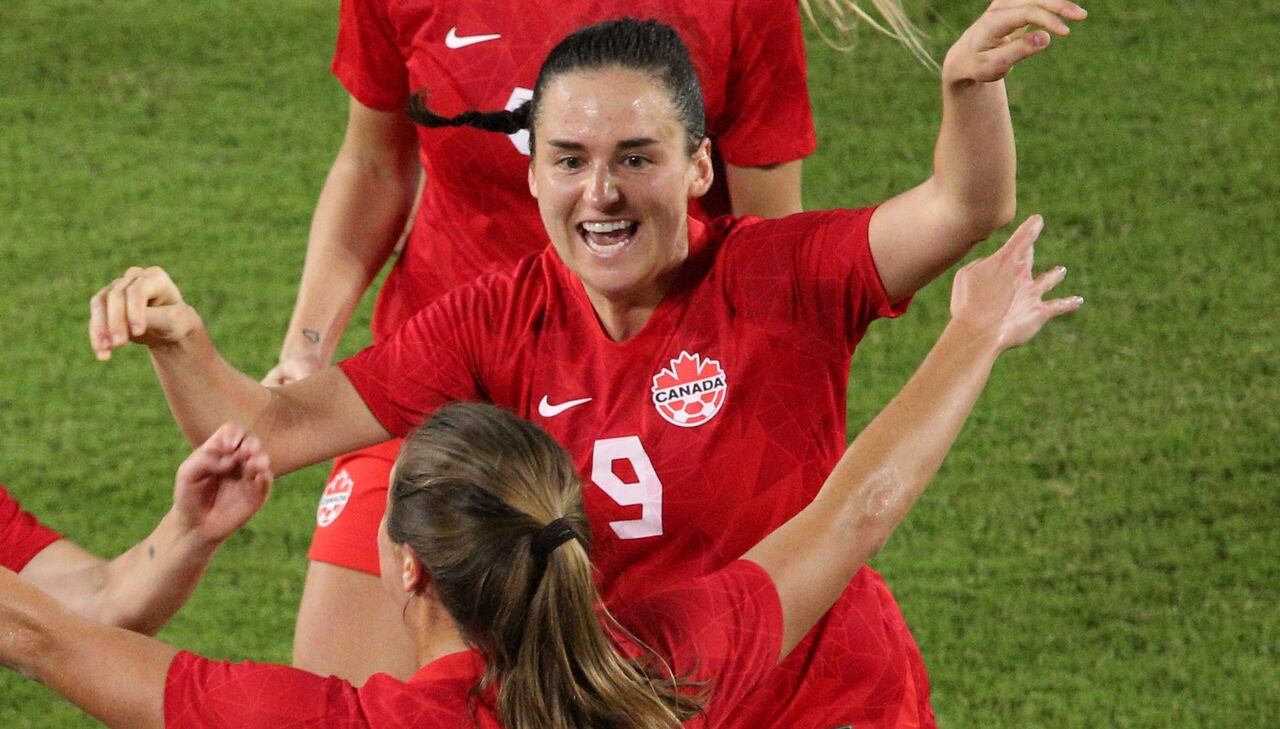 A path towards minutes with Canada?

Having torn up the Swedish league, might it be Viens’s time to do the same for Canada?

Now, she has a chance to prove that can be the case, having earned a call to Bev Priestman’s latest squad for the October window, after having missed out on their camp in September.

And in October, she could have a great shot at carving out a spot for herself in this Canadian team, as they continue to try and find more goals in their squad.

At the moment, other than Adriana Leon, who has eight open play goals for Canada since the start of 2021, goals haven’t exactly come from a consistent source for this team as of late. With Christine Sinclair having turned into more of a chance creator at 39, while Jordyn Huitema has become more of a second striker herself, Canada is looking for a finisher to capitalize on the chances they do well to create, but not put away.

Therefore, other than Leon, and midfielders Jessie Fleming and Julia Grosso, who can also provide that goalscoring threat from midfield, there arguably isn’t anyone else better suited for an audition to be that player than Viens, especially given her scoring exploits.

You could also make a good claim for Celtic’s Clarissa Larisey and Benfica’s Cloe Lacasse, to be fair, but given that Viens plays in a league that was ranked as the fifth-best in Europe last year, while Larisey’s in the 13th and Lacasse is in the 17th, her exploits especially stand out of those three.

The good news for Viens? She’ll get a chance to audition for that role in this camp.

With Canada having tweaked their formation to more of a 4-4-2 in their September camp, that switch could open up the possibility of having Viens pair a Sinclair or Huitema up front, with Leon slotting in on the left, and likely Janine Beckie slotting in on the right (unless she’s at full back) to round off the front four.

There, Viens would be the focal point of that attack, trying to get on the end of chances from Beckie, Sinclair, Huitema, Leon, Fleming, Grosso and Ashley Lawrence, while also being a point of reference for them to play off of in possession.

And given that the big reason behind Viens missing out on the CONCACAF Championships was to work on a big part of her game, you’d have to expect that was her hold-up play and playmaking, something that she’s certainly honed in on Sweden, it appeared that Priestman has had this role in mind for her for a while, too.

Because of that, all that’s left now is for Viens to take this opportunity. With two goals in 10 caps for Canada, she’s had her moments when playing for her country, but seeing her overall pro scoring record, it’s felt that she can hit another level now here.

Seeing Evelyne Viens bag another goal today, while Janine Beckie picked up another great assist from a cross, it made me think of when they linked up for *this* beauty vs 🏴󠁧󠁢󠁷󠁬󠁳󠁿 back in April 21’

Might we see more of that this summer with the #CanWNT/#CanXNT?pic.twitter.com/eMQ5oyl6up

Now, she’ll look to prove that, starting this camp, as she tries to become Canada’s next big goalscoring threat, building off of what she’s been able to do at the club level.

"I think Évelyne's confidence, as a number nine scoring goals, is (high)," Priestman said in a press conference this week (clip, above). "Her level of confidence from when we came back from the Olympic Games and she wasn't playing in the NWSL (was low), but you can see she’s a number nine scoring with confidence now. I also think the shift in the system that we introduced in Australia really complements Évelyne as an out-and-out nine, too.

"So, all credit to Évelyne, she’s producing at the club level, and my challenge to Évelyne has always been - can you do it in our environment in the training sessions and the games? And I felt that in this European tour, with this level of opposition, this is a great opportunity for Évelyne to come back in.

"I think from what I've seen, when I give her the chance to go into the Olympics, when she's playing a lot of minutes and scoring - she can do the same for country, too. So I'm really excited to have Évelyne back because she's worked really hard to get where she's gotten to."