How Jonathan David, Iké Ugbo stack up in Ligue1

There will be a clash of CanMNT strikers in France this weekend, as Jonathan David’s Lille OSC take on Iké Ugbo's Troyes in Ligue 1 action on Sunday (catch that match live on OneSoccer at 7:00 a.m. ET).

It's the first meeting between these two strikers, as Ugbo made a move to Ligue 1 back in January on loan from KRC Genk. With David and Ugbo just 22 and 23 years of age respectively, it's also a chance to see two players that are both the present and the future of the no. 9 position for Canada compete against each other.

Of course, seeing that David already has 20 goals in 30 games for Canada – good for third all-time – while Ugbo has yet to score in just four substitute appearances since committing to Canada back in November, David does have a significant leg up on Ugbo in the race for starts with Les Rouges at the moment, and understandably so.

Given that at the club level, David has now scored 13 goals in back-to-back Ligue 1 seasons for Lille (and helped his team bring home a league title last year), it's no wonder he's so highly rated in Europe, and why a move to a top, top club looms for him this summer.

At the same time, you'd be wise not to sleep on Ugbo, either. A bit of a later bloomer compared to David, Ugbo didn't play regularly in a top-flight European league until 2020/2021. Despite the later start, Ugbo has scored 16 league goals in the Belgian league in that 20/21 campaign, and followed that up in this 21/22 season with a respectable six goals (in all competitions) with Genk before his move to Troyes.

He's actually scored more than David since that transfer, bagging three times for his new club to help them crawl out of the relegation zone, whereas David, mired in a rough scoring slump , has found the net just once over that span.

Iké Ugbo is finding his form 🔥

The FW is enjoying life in Ligue 1, as he's scored his 2nd goal in 5 games since joining Troyes on loan today vs Nantes. They currently lead 1-0

Has David been that unlucky? Has Ugbo been lucky? Are their stats closer than the goal tally might suggest?

Here's a deeper look at all of that.

How these Canadians stack up

To start, there's no better place than to dive into the numbers.

Of course, Ugbo leads David in the metric with which most people measure strikers - goals, but is that a case of luck, or is Ugbo doing the right things right now?

Thanks to Understat, which tracks data in Ligue 1, we can directly compare how Ugbo and David have been doing in those categories, pro-rated on a 90-minute basis. 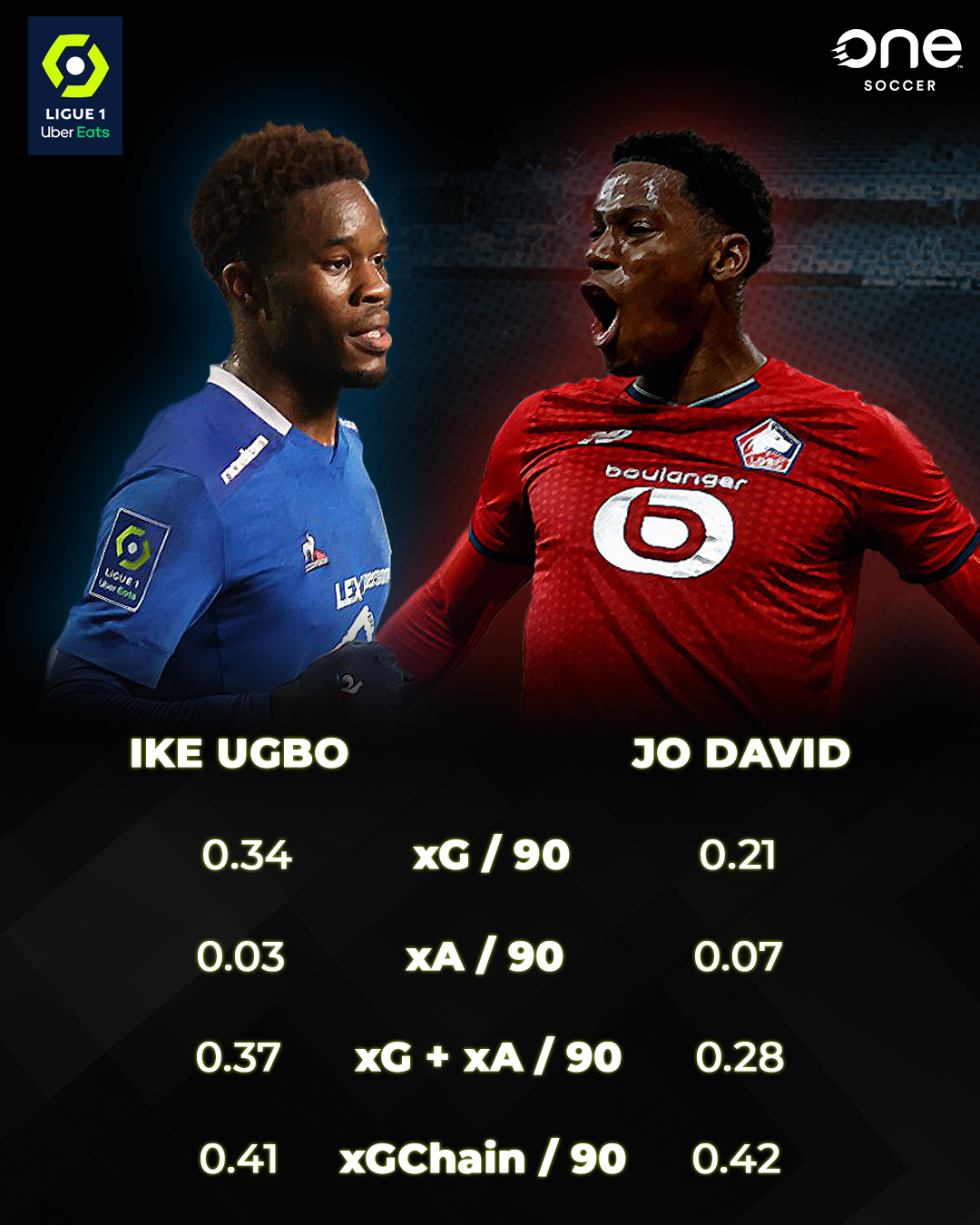 Ahead of David by a significant margin in xG per 90 minutes with 0.34, compared to his compatriot's 0.21, it shows that not only is Ugbo scoring more right now, but is doing so by getting into good positions, too. Plus, all of his xG comes from non-penalty situations, as well, which is very impressive considering that he's on a Troyes team 14th out of 20 teams in Ligue 1 in xG since his arrival.

Elsewhere, David does have a slight edge in xA, 0.07 to 0.03, to be fair, but given that he's more of a second-striker, whereas Ugbo is a more of an out-and-out no. 9, that's to be expected – and it's not as if Ugbo isn't creating much there, either.

Not only that, but given the struggles of his team to create offence as a whole, there is also the reality that it's much harder to create chances on Troyes than it is on Lille, who despite their struggles recently, are still 8th in xG since February 1st. Plus, the xA stat can be skewed in certain regards, as while it's key to seeing who is directly creating chances, it doesn't rate players who are involved in the build-up, but doesn't make those final passes quite nicely.

That's where xGchain comes in handy; a stat used to see how much a player's participation in the build-up affects the creation of xG and xA, it allows you to better gauge if someone is at least having an impact in the build-up, or just being a passenger.

There, as expected, David has an edge, but not by much, as his xGchain per 90 is 0.42, just 0.01 ahead of Ugbo's 0.41. And considering that David is seen as one of the better forwards in Europe at creating from deep and linking up play, that reflects very well on Ugbo, and shows that maybe he's underrated in that part of his game.

So not only is Ugbo scoring and generating chances for himself at a good rate, but he’s also proving to be helping his team in other areas, showing that maybe he is more than just a poacher, even if he's not quite the second-striker that David is.

With Jonathan David's workload this season, surely we might see Ugbo finally get to play a big role for Canada in Nations League play?#CanMNT pic.twitter.com/5AP78YPHuJ

Lastly, however, while it's fun to compare the pair, it's also interesting to see how they stack up against their Ligue 1 peers.

There, things are quite interesting.

So overall, that shows that in terms of goalscoring right now, Ugbo is actually among some of the best in Ligue 1, although he and David are lacking a bit in other areas, which is probably where the struggles of their respective clubs come into play

What that means for Canada

Seeing that, however, it'll be interesting to see what happens to both of them with Canada now.

Of course, barring a major surprise, David is going to remain a pretty locked-in starter for Canada going forward, one that will play heavy minutes in most big games for his country.

But in Ugbo, Canada has a potential wild card. He’ll be in tough to compete with Canada's other main striking option at the moment, Cyle Larin, who happens to be the country's all-time leading scorer, but based on his last few seasons, Ugbo should at least be on the periphery of the discussion to compete with David and Larin, even if it's to spell them off the bench.

Plus, he' actually the most natural #9 of the three, with David and Larin preferring to play more as second-strikers, so Ugbo does have that going for him, too, meaning that we could see him pair with one of David or Larin on occasion.

So as long as he keeps up this form, assuming Troyes stays up in Ligue 1 and triggers their purchase option on him, keep an eye on Ugbo going forward, as he could make some big moves in Canada's depth chart going forward.

Ahead of then, however, make sure to enjoy the short-term form that he's in, of which he’ll look to keep going with a strong game against David this weekend, who on the other side will be trying to snap his way out of the extended funk that he just can' seem to find a way out of right now.