TORONTO – In January, when Jonathan David dismantled El Salvador and Honduras with two goals of stunning quality in the space of a week, it felt like the sky was the limit.

David was brilliant for Canada in World Cup qualifying. He scored five goals in the Octagonal, trailing only his strike partner Cyle Larin, and added three assists, leading the region in goal contributions. The 22-year-old was also remarkably durable, appearing in all 14 matches and leading Canada in minutes played.

At Lille, David celebrated Christmas with 12 league goals already under his belt and an increasing number of top clubs casting their eye over him with a view to a summer transfer.

It would have been hard to predict, a few months ago, that David would be travelling to an away match against Reims this week as a substitute, and that his goalscoring tally would have grown by just one, to 13.

But that was the case for a 2-1 loss that has likely extinguished any hope of Lille playing European football next season. The defending champions sit ninth. With five games to play, a season to forget is slowly coming to an end.

David’s struggles in 2022 will almost certainly not cost him the jump up the footballing pyramid we have been expecting him to make. There is enough evidence of a rare talent to draw plenty of interest regardless of his recent strike rate.

But what is behind that lack of goals? And how will it affect what happens in the summer transfer window? Those are questions worth spending some time delving into.

Question one: has David stopped scoring because he is missing chances, or because he isn’t getting as many chances as he was earlier in the season? 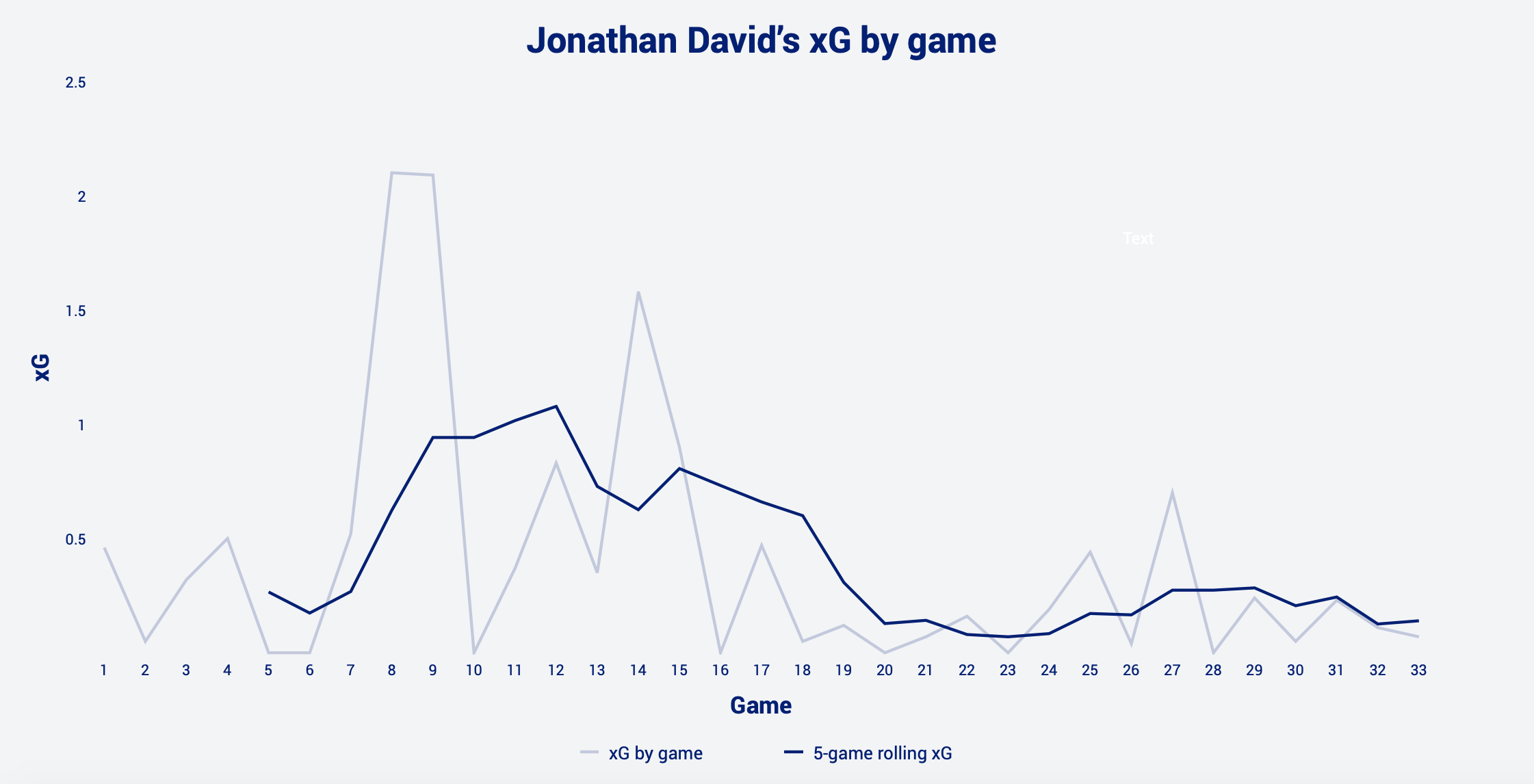 (These xG stats are courtesy of Understat.)

The darker line is David’s average xG per game over the previous five games. As you can see, it has flatlined during the second half of the season.

We know that David didn’t suffer some sudden decline over the holidays, because he was better than ever with Canada in January. So what’s going on?

One potential explanation is Lille’s performance as a team. Their team xG has been trending in the wrong direction for some time and has only recently shown signs of recovery. 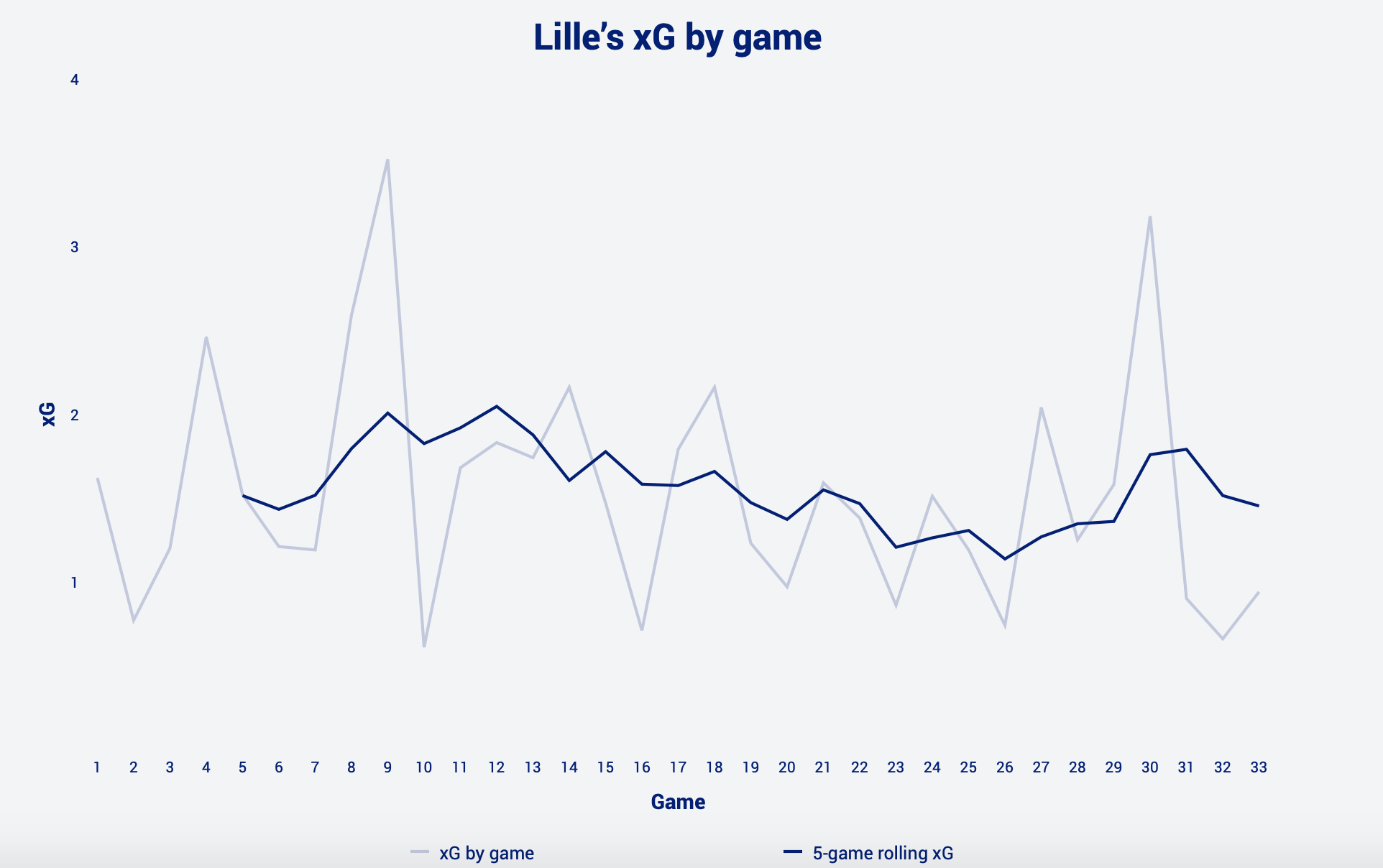 Lille’s shock title win last season was based on a brilliant defensive record, not a particularly exciting attack. New coach Jocelyn Gourvennec appeared to try to loosen things up at the start of the current campaign, but that did not go well: a 3-3 draw with Metz (who now sit 20th) was followed by a 4-0 thrashing at the hands of Nice, and that was pretty much the end of that.

That has not made it easy for any individual attacker to thrive. After David, Lille’s next top scorer is veteran striker Burak Yilmaz with four, and two of those were penalties.

There is another strong possibility more specific to David: fatigue.

His cameo against Reims was his 57th appearance of the 2021-22 season for club and country. That is a heavy year’s work already — and David still has as many as five Lille games and (likely) four Canada games still to play.

“Even if Jona has an exceptional physiology, with an extraordinary capacity for recovery, he is not a robot,” Gourvennec said this week. “Players are not machines.”

According to Stats Perform, 25 forwards in Europe’s top-five leagues have played 3,000 minutes in all competitions for their clubs this season. When World Cup qualifying matches are added, David leads them all with 4,333 minutes played. 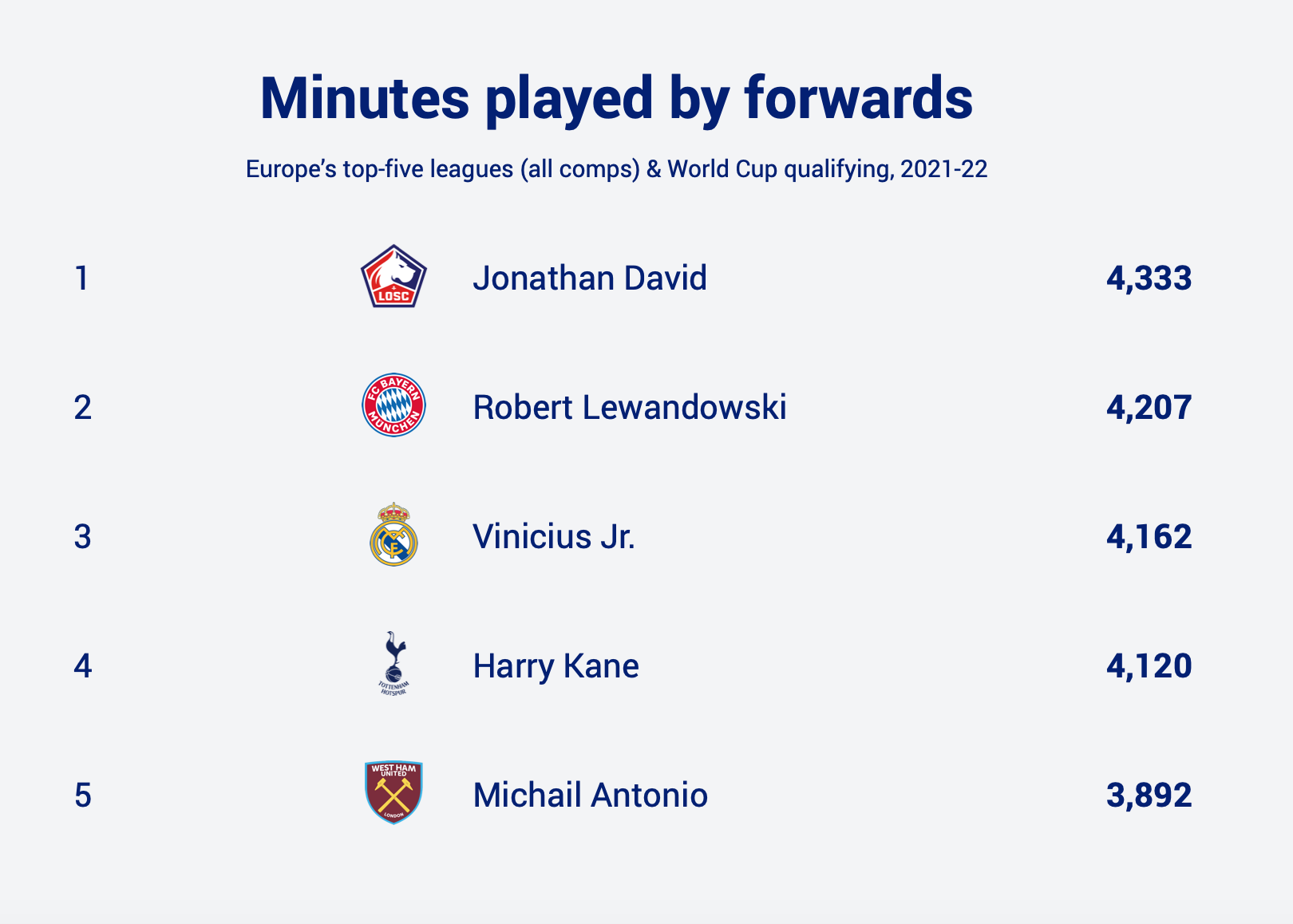 That’s before you account for travel, a much greater burden on non-Europeans.

And it’s worth noting that he is not alone among Concacaf stars in finishing the season slowly. Since returning from the January window, Raul Jimenez has scored two league goals. David, Christian Pulisic, and Alberth Elis have one each. Cyle Larin, Hirving Lozano, and Michail Antonio have none.

COVID made for an unprecedented qualifying schedule and it appears to have taken its toll.

What does this mean for David’s prospects of joining one of Europe’s elite clubs this summer?

It might not matter all that much. Of course, if David had bagged 25 goals this season, he would be destined to join one of the best teams in the world for a huge fee. But some of the most successful clubs in Europe prefer to shop in the €30-50 million range and leave the €100 million megadeals to others.

And the goalscoring potential is clearly there, even if David hasn’t put it together over a full campaign yet. Between the second half of last season and the first half of this season, he netted 23 league goals in 37 games for a low-scoring team.

What potential buyers will also love is David’s commitment to off-ball running, both in and out of possession. He should be a natural fit for a high-tempo, high-pressing team.

Where he ends up will depend on how numerous other dominoes fall in what could be an incredibly busy market for strikers.

On top of that, Romelu Lukaku is unsettled at Chelsea, Bayern Munich could cash in on Robert Lewandowski before his contract expires in 2023, and Manchester United’s everything-must-go sale could include Cristiano Ronaldo and Marcus Rashford.

It’s a complicated enough game of musical chairs before you even get to players who look set to make a step up like David and Benfica’s Darwin Nunez.

David could end up at any one of a number of clubs and much can change between now and the summer. But there is logic to the links with Arsenal, which have persisted for several months.

The Gunners desperately need a striker. They have shown a willingness to spend big on the right one, chasing Dusan Vlahovic in January. And David should play regular minutes immediately at the Emirates Stadium — vital in a World Cup year.

Arsenal have underachieved for years and are still battling for Champions League qualification. But despite a recent downturn in form, they have improved under Mikel Arteta and have an exciting supporting cast for whichever striker they choose in Bukayo Saka, Martin Odegaard, Gabriel Martinelli, and Emile Smith Rowe.