FINAL FOUR: Who's got the best shot at winning 2022 Canadian Championship 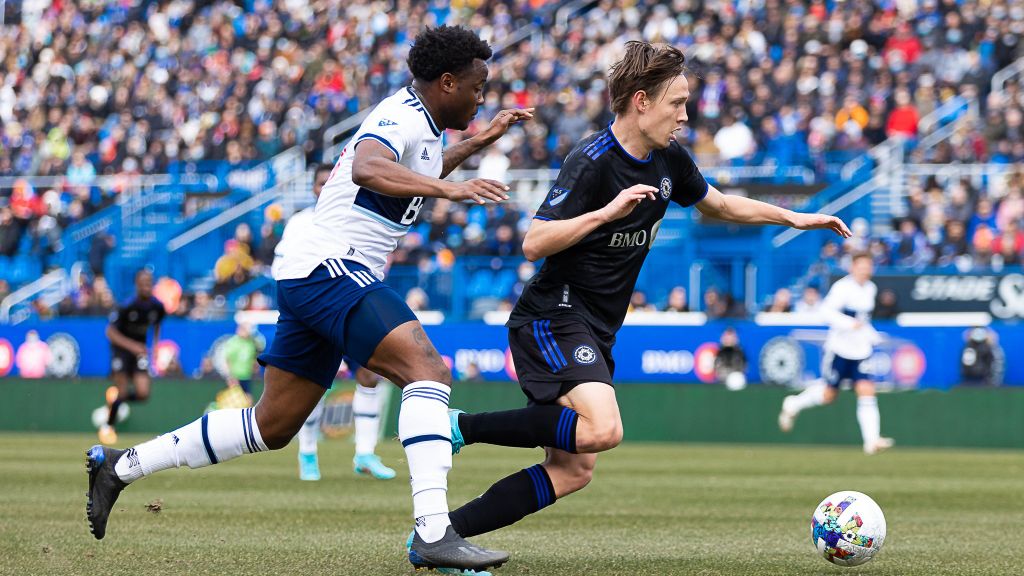 And then there were four.

After a fun round of the Canadian Championship this week, one where we saw all sorts of drama, including world-class goals, late goals, spot-kicks, and more, that has now whittled the field of participants in this year’s tournament down to four teams.

Having survived the chaotic nature that has been this year’s tournament, that has left the Vancouver Whitecaps, Toronto FC, CF Montréal and York United as those remaining four participants, with their dreams to lift the Voyageurs Cup as 2022 champions all still alive. 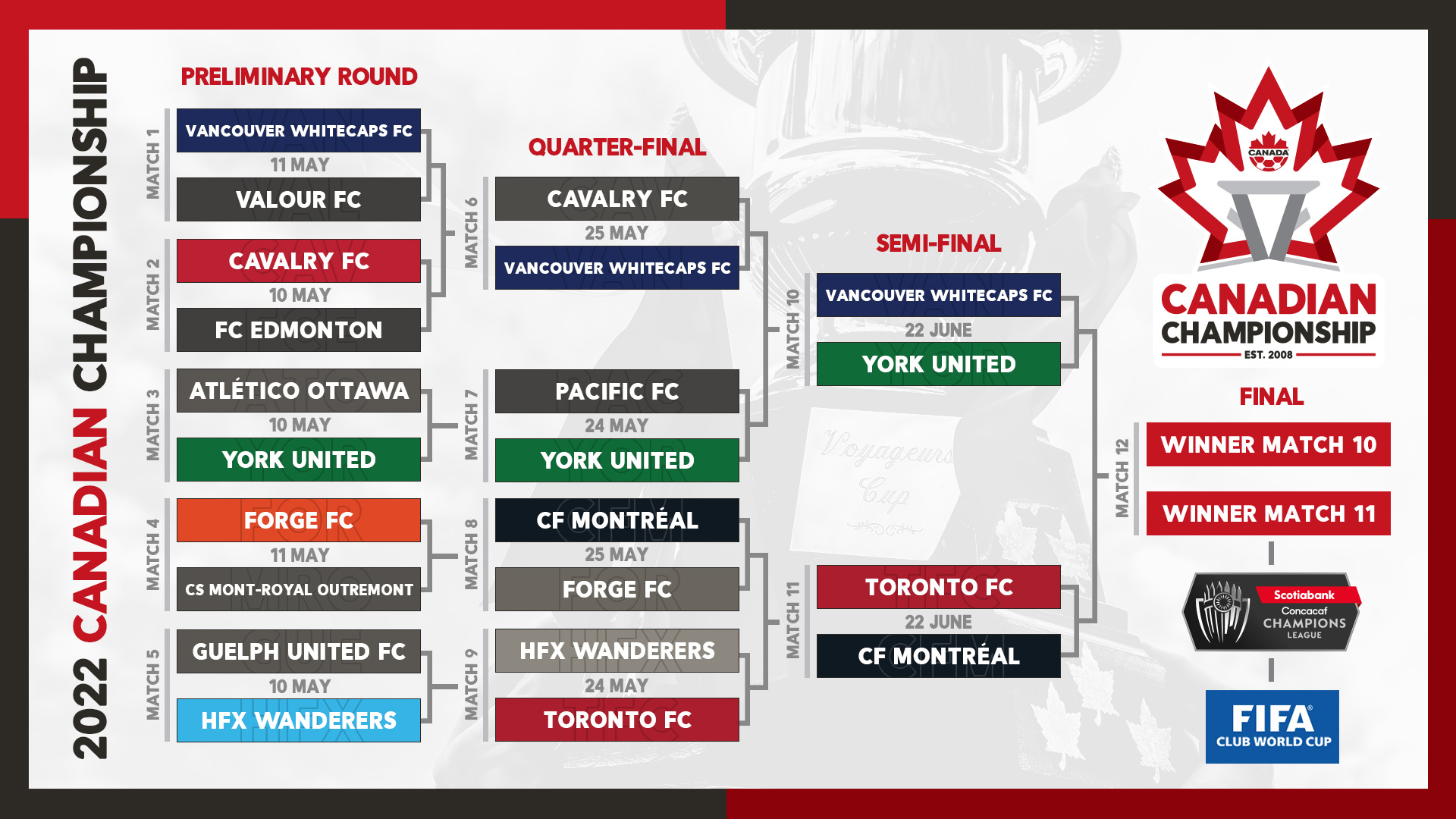 So now, having navigated the trickier part of the competition, it’s anyone’s ball game now. Every team that remains is there for a reason, as they all have good odds of becoming the latest champion.

And seeing that, here is who has the best chance at lifting the Voyageurs Cup later this year, adding another chapter to a rapidly growing competition, not only in size, but in entertainment, as well.

Heading into this tournament, it was hard to bet against Montréal.

The defending 2021 champions, they entered this year’s competition as the most in-form team, off to a roaring start in MLS play, and hungry after getting a taste of the CONCACAF Champions League earlier in the year.

And their first game did nothing to change that notion, as they dominated Forge in a 3-0 victory in the quarter-finals, despite playing with a heavily rotated squad that didn’t include regulars such as Victor Wanyama, Djordje Mihailovic and Romell Quioto.

So considering how deep they are as a team, their pedigree as defending champions, and their play in MLS (they’re currently eighth in the Supporters Shield race, just six points off first), it’s going to be hard to imagine anyone other than Montréal lifting the Voyageurs Cup at the end of this competition, making them odd-on favourites.

As the winningest team in this competition, with seven titles (and maybe soon eight) at their disposal, Toronto has always seemed to find a way to be in the running to lift the trophy at the end of each tournament. In fact, since the tournament was created in 2008, Toronto has been at least runner-ups in all but two editions of this competition, and although you could point at the fact that it used to be a three-team tournament as a reason why, that's still quite impressive.

So although this Toronto FC team has been struggling in MLS play, down to 26th out of 28 teams as injuries and a lack of depth has left them with a very young team, it's going to be hard to count Toronto out until the end. They showed that in this most recent round, as well, with Jonathan Osorio (who else?) scoring right in the 89th minute to grab a clutch 2-1 victory over the HFX Wanderers, finding a way to get the job done despite being on the ropes near the end.

Therefore, while it feels like they’ll be hard-pressed to beat Montréal in these semis, just the fact that this game will come in this tournament, you just know Toronto will find a way to step up, especially at home, and will look to keep up that mentality should they make it to a potential final.

Since the tournament began in 2008, the Vancouver Whitecaps have had a rocky history with this competition. In fact, despite being there from the beginning, even when it was a three, four and then five-team tournament, they have just one win to their name, coming back in 2015.

Every other year, it’s just been heartbreak, from late winners, weather controversies, and recently, an inability to beat CPL teams. Due to that, it has really felt like the Whitecaps have been cursed, which isn’t that unreasonable given how they had lost some years.

Now, however, they’ll have to feel that this is their year. Having been given a very good draw on paper, they have so far made the most of it, dispatching Valour 2-0 at home, before picking up a late comeback win over Cavalry on penalty kicks. Plus, with a chance to play York at home in the semi-finals, and the winner of Toronto versus Montréal at home should they make it that far, it’s all lined up for them nicely here, especially given how good Vancouver has been at home in recent years.

Because of that, this has to be the year the Whitecaps make it a second triumph, and anything other than that will be viewed as a disappointment. Currently second-last in MLS play, they feel like they’re better than their league record suggests, as their depth has been exposed by a run of injuries, and there’s no better way to prove that than by winning this competition.

Verdict: This has to be their year

Not many people had York getting through the preliminary round, much less to the semi-finals, but here they are, as they’ve put together two perfect away cup ties, finding a way to get by Atlético Ottawa and Pacific FC on penalty kicks.

So all of a sudden, they now find themselves in their first-ever Canadian Championship semi-final, and now, there’s no reason why they can’t believe in winning the competition. They might be the lone CPL team remaining, but as they have shown, they don’t appear to fear anyone, and as recent MLS vs CPL games have demonstrated, for the most part, the competitive balance is close.

Especially against a ‘Caps side who despite their recent results, still has a tough history with CPL teams, York can dream of an upset over Vancouver, before hosting a potential final.

Plus, most importantly, they’ve got the perfect make-up for cup soccer, as they’ve been extra stingy defensively this year, sitting with the best defensive record in the CPL, and have proven to be tough mentally, so even if it might seem tough for them to lift the crown, they’ll believe in their ability to do so.

Because of that, don’t write off York quite yet, as they’ll look to surprise once again en route to making even more history for their club.

Verdict: Going to be tough, but they’re built for this