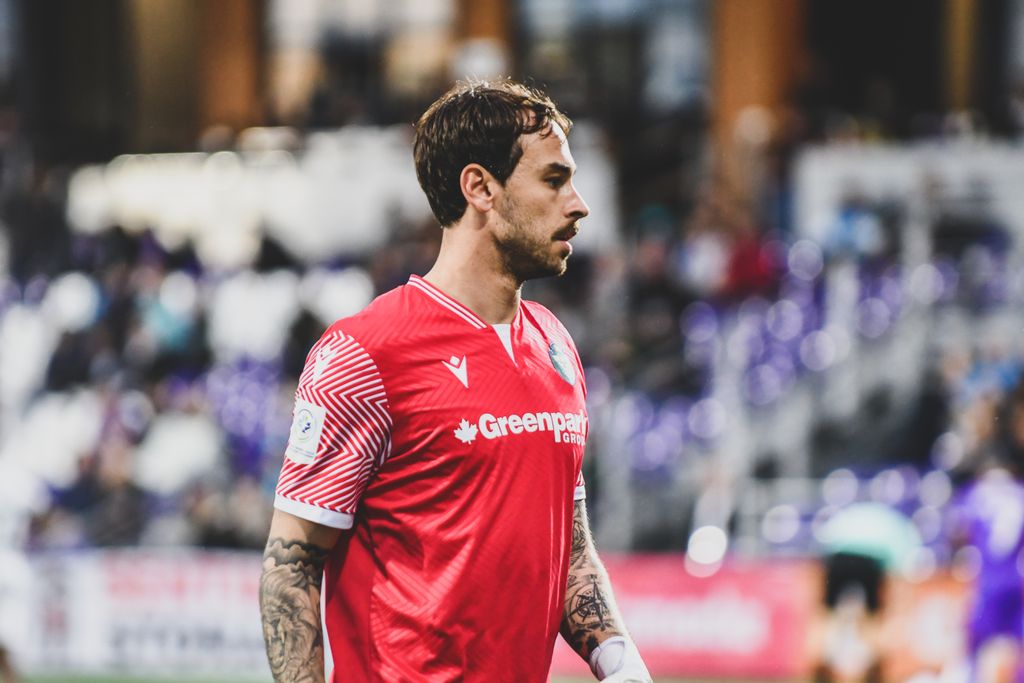 VANCOUVER – As he sat in the airport reflecting on a whirlwind weekend, York United goalkeeper Niko Giantsopoulos still doesn't feel like everything he went through actually happened.

"It was kind of like a crazy dream," he told OneSoccer on Tuesday morning.

Yet, that's just the perfect way to describe Giantsopoulos's last five days - a fever dream, one from which he's just awoken.

Starting in Victoria on Friday afternoon, and ending back in Victoria on Tuesday morning, the journey between those two similar starting and ending points was one to behold, one that will live on in the scribes of Canadian Premier League history for years to come.

It all began on Friday, when Giantsopoulos received a mysterious phone call.

As the Vancouver Whitecaps all of a sudden saw themselves short all of their eligible goalkeepers, they needed to find an emergency shot-stopper for their next game – an MLS clash in Charlotte on Sunday.

Seeing that news, as he told CanPL.ca's Newsroom on Monday, Giantsopoulos then semi-jokingly sent a text to York's President and CEO Angus McNab, stating that he'd be available to help the Whitecaps if needed.

After that, he put the jokes aside and decided to take a nap – he and his team still had a game to play on Friday night against league-leaders Pacific FC, after all.

Then? It all came together. All of a sudden, his phone rang. "The paperwork is on its way," and, inexplicably, Giantsopoulos was going to be a Whitecap, signing a four-day short-term emergency loan with the team.

York United FC has loaned goalkeeper Niko Giantsopoulos to Vancouver Whitecaps in a short term deal. He will return to The Nine Stripes on Monday ahead of the team’s Canadian Championship clash with Pacific FC.#YorkUnitedFC | #UnitedByYou pic.twitter.com/WIIZmb6zkD

From there, things moved quickly. Despite not knowing if the paperwork had gone through by the time he left for Starlight Stadium, he found out that it did through a Pacific member congratulating him on the move, confirming to him that it indeed was real. Then, despite knowing that good news, he avoided distraction and managed to keep a clean sheet in a 0-0 draw, before setting off on his journey to Charlotte.

Except there, he encountered a problem - he didn't have his passport, as it was sitting on the other side of the country in his Toronto apartment. Given that he had travelled within Canada, meaning he didn't need one, that meant that in order for him to get to Charlotte, he needed to get his hands on it in some way or another.

But that's where a hero, York's Vice President of Ticketing and Hospitality, Brittany Arner, stepped up. Having been told of the predicament, York's Ontario-based staff were able to get into Giantsopoulos's apartment to get the document, with Arner tasked to fly out to Vancouver just to deliver it and head home.

Thanks to that, that allowed Giantsopoulos to head out to Charlotte to rejoin the Whitecaps. He didn't end up playing that day, as Vancouver chose to give newly-signed 17-year-old academy goalkeeper, Max Anchor, his debut, but Giantsopoulos was ready if needed, as Anchor was coming off a quad injury.

Having made it through that experience, however, things didn't get any easier from him there, as instead of heading home to Toronto, Giantsopoulos had to head back to York, where his teammates remained as they got set to take on that same Pacific side on Tuesday, this time in the quarter-finals of the Canadian Championship. Not only that, but having arrived on Monday, Giantsopoulos had little time to prepare for that game, either, and had to do so while shaking off the effects of cross-country travel and multiple flights.

Yet, despite that, he shook that off and went right into Tuesday's game, where he then capped things off in a memorable fashion. After an entertaining game, one that saw Pacific score a late, late equalizer to send it to a shootout, Giantsopoulos, much as he did in the round prior for York, came up clutch.

First, he saved Alejandro Diaz's opening shot for Pacific, and then on the last kick of the shootout, with the chance to win it, he denied Marco Bustos, before turning to the Pacific crowd and electing to bow to them in celebration, wrapping up his legendary weekend in the most fitting way possible.

"I (said before the game) that we're gonna give the fans a show," Giantospoulos joked of his bow. "So that's kind of the way you cap off the show at the end, I had to bow to the crowd."

And now, thanks to that performance, the show goes on for Giantsopoulos and York, who now advance to the semi-finals of the Canadian Championship, where they'll now either play his former club Cavalry, or those same Vancouver Whitecaps.

Of course, facing Cavalry would be a homecoming to remember for Giantsopoulos, having played there for two seasons in 2019 and 2020, but having now been in the Whitecaps system, even if just for a few days, he admits that it's something that he wouldn't mind having happen, if it does end up going down that way.

"If it happens to be the Whitecaps, it'd be nice to play them," he admitted, tongue-in-cheek.

But even if he doesn't play the Whitecaps, showing them what they missed by not playing him, there's no doubt that he's now on their radar, helping show that his hard work in the CPL is paying off.

Having reflected with his parents and family on the experience Wednesday morning, Giantsopoulos remains extremely grateful for the opportunity, one that he said was a dream he'd be happy to relive a million times if given the opportunity.

And who knows, if he keeps up his heroics from Tuesday night, it might not be long before that's the case, leading to more memorable stories like this one.

"It was an absolute blast, right?," Giantsopoulos finished. "I got to be part of three soccer games in five days, and I wouldn't change it for the world. Those kinds of opportunities are the ones that not just myself, but probably any CPL player, dreams to get."

Crazy last few days. Good result on Friday, cup of coffee in the MLS on Sunday, then back to Victoria on Tuesday to advance to the semi finals of the #CanChamp

Thank you to everyone that was involved, it’s been an absolute blast!