Who is Rosa Maalouf? The CanW17 forward stealing headlines in Concacaf 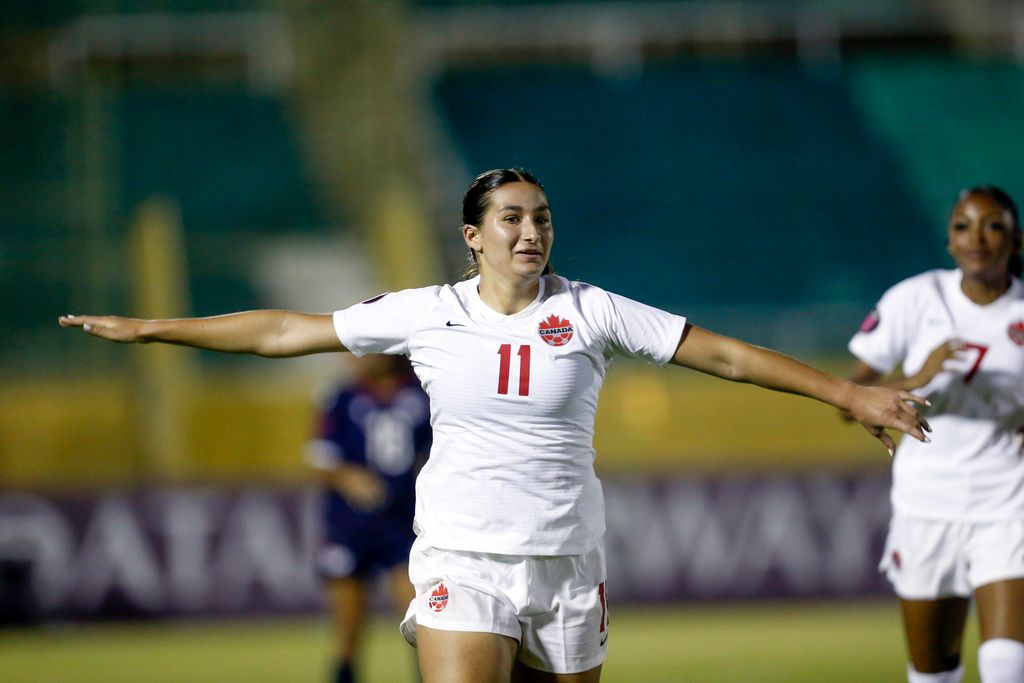 While the current generation of Canadian stars continue to make an impact on the international stage, the next generation is already starting to leave their mark at the youth level.

The latest example? Look no further than down in the Dominican Republic, where Canada's Under-17 Women's National Team is currently on a mission at the CONCACAF Women's U-17 Championships, chasing their sixth consecutive qualification to the 2022 FIFA U-17 Women's World Cup later this year.

So far, the "Baby Reds" – as they've been affectionately dubbed – have gotten off to a roaring start, picking up a 10-0 win over the Dominican Republic in their opening group stage game, before nabbing a 5-0 win over Bermuda in their second group stage (catch the replays to those games on OneSoccer's YouTube channel).

So, as Canada's U-17 women get set for their third and final group stage game against Jamaica (again, available on the OS YouTube channel!), they'll look to keep those good times rolling by topping the group with another comprehensive victory en route to the knockout stage.

From there, should Canada navigate the 16-team field carefully and finish among the top three teams, they book a spot at the U-17 World Cup; if they win this tournament, they'll bring home some silverware, too.

To accomplish those goals, it's imperative that Canada maintain good form, having combined solid defence and stellar attacking play in their first two outings.

Speaking of which... it’s worth highlighting someone who has stood out in the latter area for Canada – forward Rosa Maalouf.

The 15-year-old out of Ottawa has been on fire to start this tournament, already nabbing an impressive six goals through Canada's first two games, tying her for the lead in the Golden Boot race. Not only that, but her goals have been very well taken as well, with powerful strikes, mazy dribbles, and clinical finishes marking some of her best tallies.

It's left many wondering if we are getting a glimpse at a future Canadian Women's National Team regular in Maalouf, a name that could be one to watch out for over the next few years, as such.

Maalouf currently plays for Ontario's NDC team in the Premier Division of League1 Ontario, where she and other top 15-to-18-year-old players in the province play side-by-side. There, under the Canada Soccer Excel umbrella, Maalouf has a chance to gain exposure to Canada Soccer staff and scouts, all while playing against the competition that L1O offers – including some top university teams.

While Maalouf has yet to fully make her debut there – the L1O campaign just kicked off this past weekend, while she's off scoring for Canada – it'll be a good spot for her to further hone her skills after this tournament concludes, giving her a few years to develop before either deciding to go the college route... or go straight to the pros.

After the run she's had so far on at this tournament, it'll be interesting to see if she can build on her already-impressive resume.

Of note, in the last three U-17 tournaments that Canada has played in, we've seen the likes of Jessie Fleming, Jordyn Huitema, Julia Grosso and Jayde Riviere then make the step up to become National Team regulars, as well as pro stars at club level; nearly a dozen more players have at least gotten senior appearances for Canada as well.

There is a strong chance that this tournament could vault Maalouf to bigger things at the international level.

So, keep an eye on her for the rest of this competition, especially as the games get tougher. As one of the younger players on this team, Maalouf has already proven to be unfazed by the big occasion, and will want to keep that up as her team looks to not just book their ticket to that World Cup, but do so in style by also bringing home a regional trophy.

As Canada looks to build off the success of their Olympic gold medal, integrating youth remains a key long-term objective for Bev Priestman ahead of the 2023 World Cup, 2024 Olympics and 2027 World Cups.

Perhaps Maalouf will fit the bill here, then.