WHAT WE LEARNED: Key takeaways from the CanWNT's surprise Australian sweep 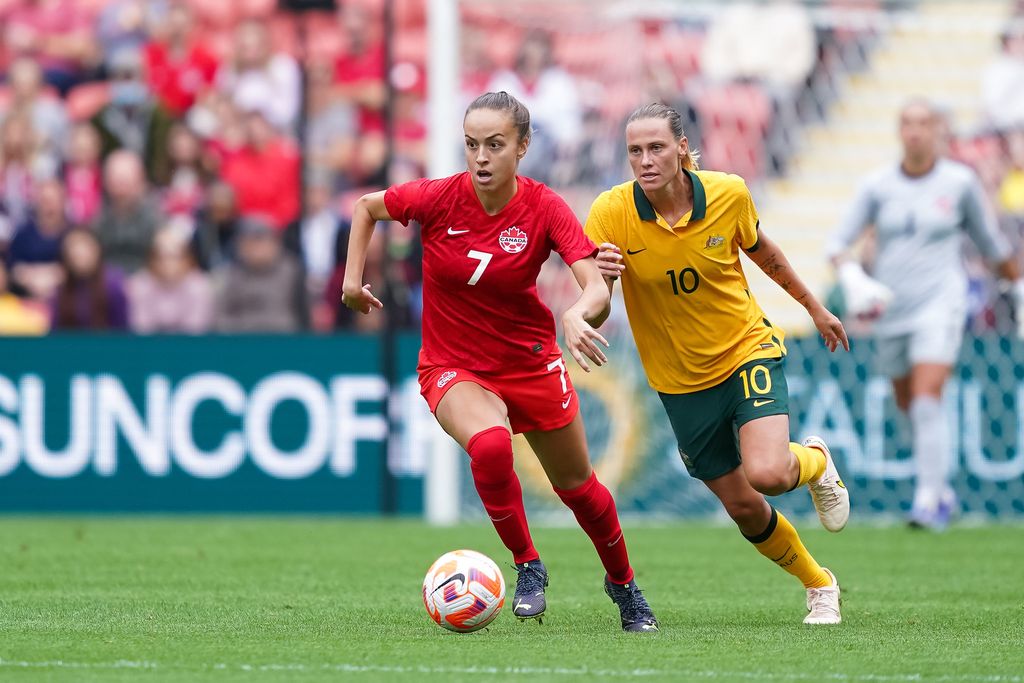 Against all odds, they got the job done.

Despite entering this September window severely shorthanded, missing several regulars from their usual squad, the CanWNT flexed their depth this past weekend, nabbing two wins in two friendly clashes against 12th-ranked Australia.

Even though they were without the services of their entire starting backline, along with a few other key regulars, that didn’t stop them from being able to shut down the Matildas across these two games, first grabbing a 1-0 win in their first matchup, before nabbing a 2-1 comeback win in their second.

For a camp that was supposed to be as much about lessons learned and growth as it was about results, is a nice bonus, as while they did set out and accomplish their main goal of the camp - to advance tactically as a team - to do so in a winning setting is always a big plus.

Because of that, as they wrap up the first stop on their journey toward the World Cup next year, there are a lot of positives to take away from this camp, one that has gotten them off on the right foot as they get set for what lies ahead between now and next summer.

Speaking of those positives, here’s a closer look at some of what really stood out in this window, in particular.

It was a bold tactic right from the beginning. But it was one that paid off in spades for Canada.

For a Canadian team that had typically stuck with a three-player midfield setup ever since Bev Priestman had taken over as head coach at the beginning of 2021, to see her begin the camp with a new-look midfield pivot was a surprise, especially given who was starting in that pivot - Jessie Fleming and Julia Grosso.

Typically two players that have done their best work in the final third for Canada, with Grosso and Fleming sitting as two of the most productive offensive Canadian players over the past two years, it was interesting to see Priestman slot them in a pivot, one that was tasked with both defending and attacking.

Especially given Priestman’s preference to often rely on at least one of Quinn and Desiree Scott, if not both, to act as defensive midfielders in those three-player setups, it was bold to see them sacrificed in this new 4-4-2/4-2-3-1 for two midfielders that do their best work as #8s.

Yet, it was a bold tactic that paid off handsomely for Canada, as not only did Fleming and Grosso step up big from an individual standpoint, putting together some quality performances, but they also changed the way Canada played when deployed together, as well. 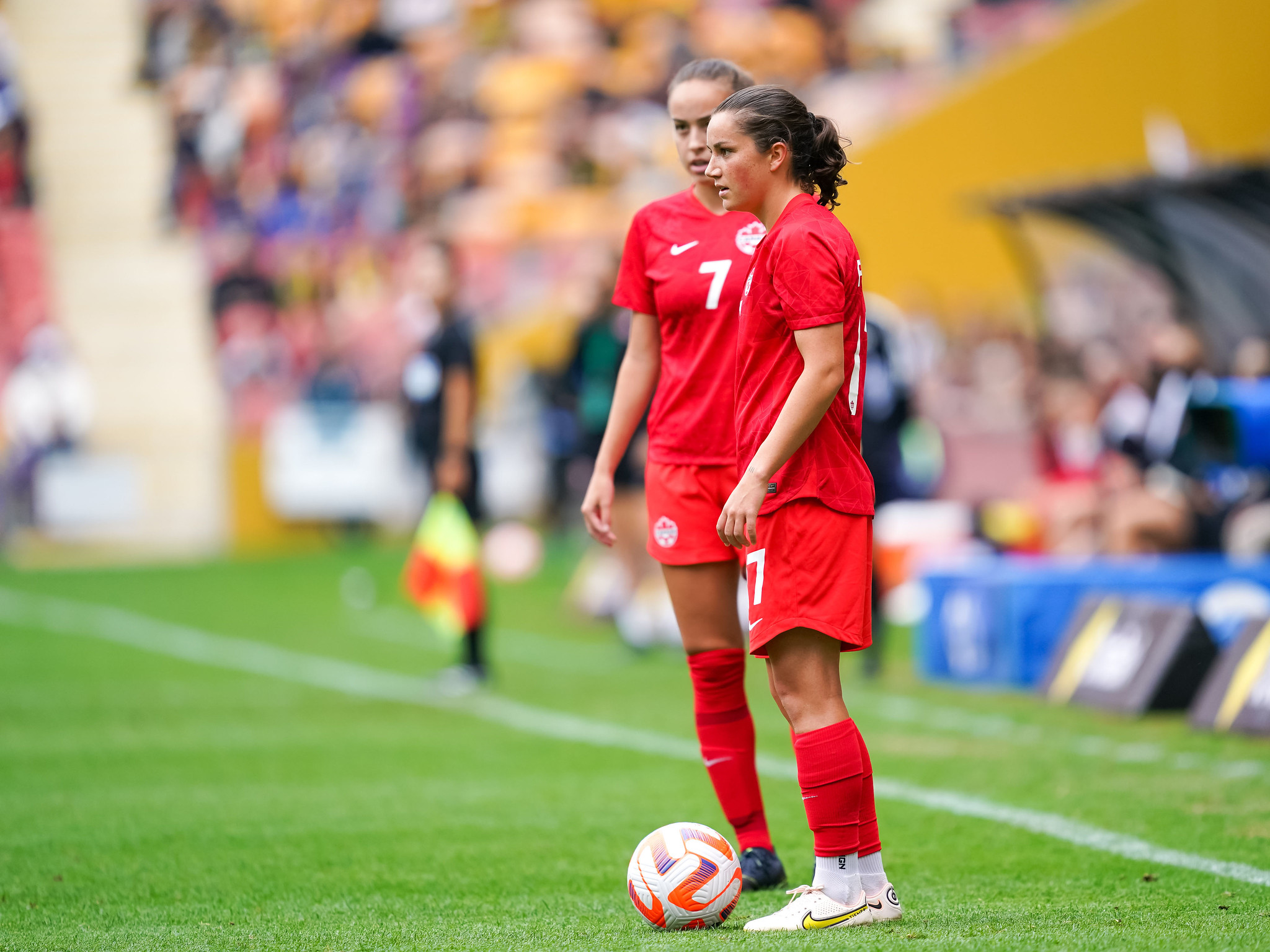 Not only were they their usual selves on the ball, causing all sorts of problems for Australia’s midfield with their quick passing, sharp turns and ability to spray the ball around, but they also used their speed and engines to their advantage, covering all sorts of ground for Canada while going box-to-box.

As a result, they ensured that the impact that they provided wouldn’t only come in the attacking third, but in the defensive third, too, playing a big role in Canada’s success at both ends in this camp.

Therefore, it’s no surprise that in the ~100 or so minutes that they played together across these two games, Canada scored its three goals with them on the pitch, while conceding none across that time, showing the benefit that impact eventually provided at both ends.

Through that, they also offered a potential solution to a problem some feared that Canada might have ahead of the World Cup - a midfield mix that would allow them to find the balance between offence and defence that Canada has swung on both sides of over the last few years, just failing to stick somewhere in the middle.

With Grosso and Fleming, however, not only did they find that balance, but arguably added a whole new dimension to their arsenal, too, giving them the sort of fluidity and dynamism that they’ll need to beat some of the top teams of the world next year.

Which for Canada, is massive. Especially given that pivot offers the potential for Canada to either play a back three (something that wouldn’t hurt given their plethora of options at centre back), or play with an extra attacker as they did in the 4-4-2 (helping them solve some of their offensive struggles), this Grosso and Fleming pivot can help Canada in many ways now here.

Because of that, look for Canada to experiment with this look more going forward, as what was first a big risk ended up paying off big time for Canada, and could be the golden ticket they needed to evolve tactically ahead of the big dance next summer.

Is Adriana Leon the forgotten solution up front?

Heading into this camp, it was no secret that Canada was looking for some players to step up offensively, as they continue their longstanding search to find offence on a regular basis.

And while they didn’t necessarily find a big breakthrough in this camp, scoring a solid three goals across the three games, one player stepped up big offensively, in particular, and that was Adriana Leon, the scorer of all three of those goals.

Through that, she opened up an important question - might she be the forgotten solution for Canada up front offensively?

Which, after this camp, isn’t so far-fetched, as those goals now pushed Leon to eight goals since the start of 2021, which is tied with Jessie Fleming for the most goals over that time span. You consider that all of those have been non-penalty goals, too (three of Fleming’s have come from the spot), and that’s pretty impressive, seeing that the next best non-penalty goalscorer other than Leon and Fleming over that span has been Christine Sinclair with four.

Yet, that shows how solid Leon has been over the past year-and-a-half, as she continues to find a way to score goals for Canada, be it as a starter or off the bench.

*pretends to be shocked*

Having developed some nice chemistry with Jordyn Huitema, whose five assists this year now lead the team in 2022, there’s a nice partnership brewing there, one that could be beneficial for Canada.

With Huitema having developed into a very good false-nine, one that drops deep and combines nicely with Christine Sinclair, Leon is proving to be a perfect complement to that pair, doing a great job at making bulldozing runs in behind to try and capitalize on the space that Sinclair and Huitema create.

Therefore, while some are holding out for an out-and-out #9 option to emerge as Canada’s solution offensively (which someone like Evelyne Viens could be, if not Huitema eventually), Leon is proving that she is someone worth watching for Canada, even if she might not get the fanfare of other names in the race for attacking minutes.

Having made a big move to Manchester United this offseason, too, this could be a big season for the 29-year-old, who looks set to play a big role for Canada at next year’s World Cup, especially if she can keep this run of form going for both club and country. 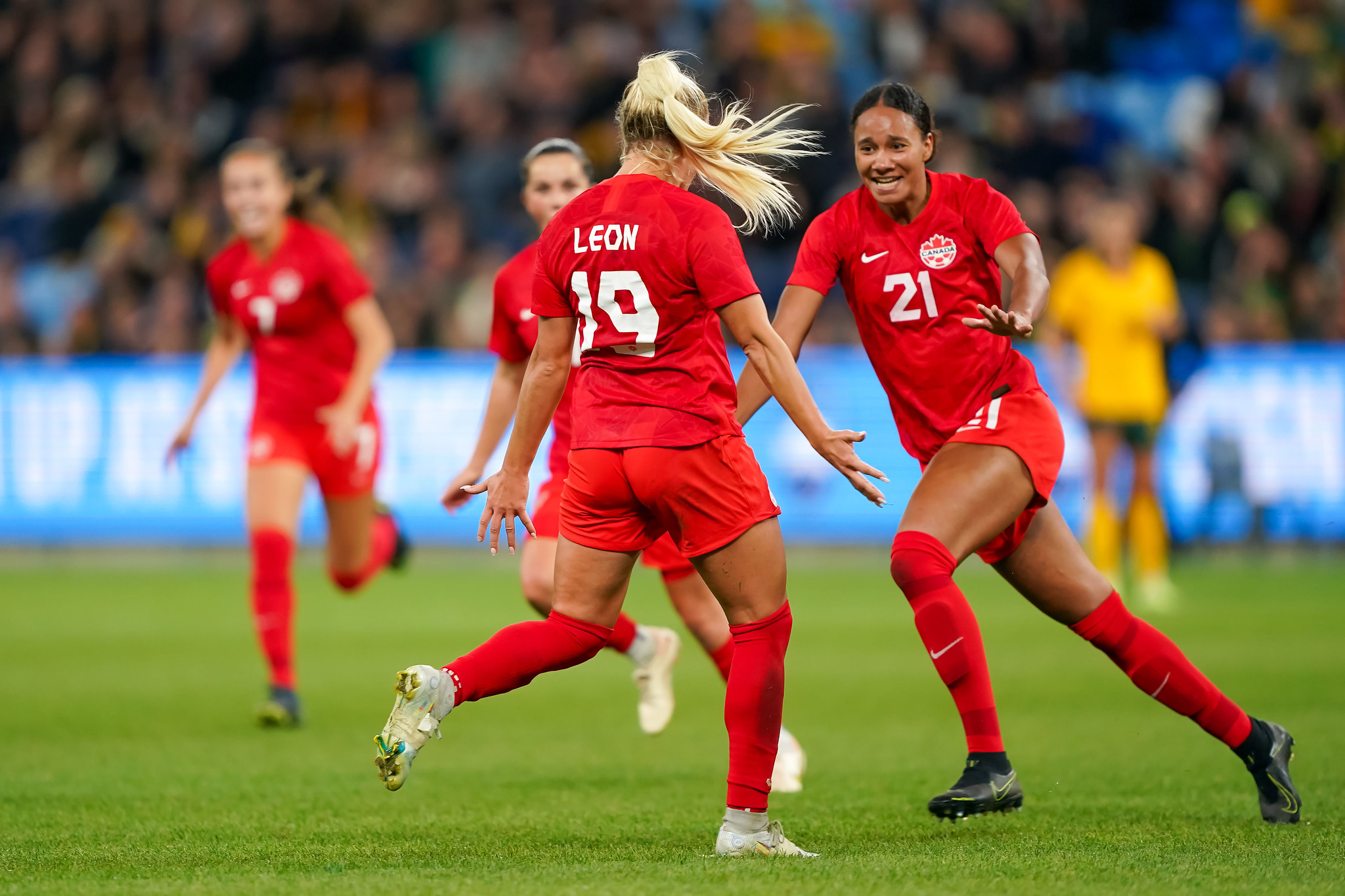 The kids and new faces are more than alright:

Speaking of that World Cup for a minute, however, there were certainly a few names that did a good job of auditioning for roles at that tournament in this camp, doing well with the cameos that they were given.

For example, there was Bianca St.Georges, who was excellent for Canada at right back across both games, making some big tackles defensively, while also pushing up the field as much as possible. Otherwise, Clarissa Larisey’s bright stint off the bench up front in the opening game was a nice plus, as was Marie Levasseur’s and Sura Yekka’s solid performances at the back in each game.

On top of that, there was also the pair of Canadian U20 players, Simi Awujo and Jade Rose, who after representing Canada at the U20 World Cup last month, did not look out of place at all at the senior level, with Awujo having a bright cameo in the first game, while Rose had a player of the match performance in the second game, nabbing a clever assist while stopping Sam Kerr on several occasions.

You sprinkle in some solid performances from the likes of Gabrielle Carle and Cloe Lacasse, and it was overall a good camp for Canada’s depth players, many of whom stepped up and played big roles for the team across the two games.

Christine Sinclair talks about the depth of the #CANWNT following a 2-1 win over Australia https://t.co/aw9x6SBHXj

Yet that just shows Canada’s growing depth, which is seemingly improving by the month, making the team deeper than ever before.

Ahead of the World Cup, that’s crucial, as Canada is looking to keep a good competitive balance in the squad, ensuring that each of their players earns their spot for next year, much as they had to do before the Olympics last summer.

Because of that, look for some of their positional battles for that tournament to go down to the wire, especially if this tournament was to be any indication, which should be fun to keep an eye on over the next few windows now here.