WHAT WE LEARNED: Key takeaways from CanMNT's return to action

VANCOUVER – After a long week off the field, the CanMNT finally made it back onto the pitch Thursday, as they took on Curaçao in CONCACAF Nations League A play.

It was a big occasion for a number of players returning home to Vancouver, including Alphonso Davies, who returned to the Canadian national team fold for the first time since being ruled out with a heart issue at the top of the year.

Canada rolled out to a big 4-0 win, paced by goals from Davies (x2), Steven Vitoria and hometown hero Lucas Cavallini, kicking off their 2022 Concacaf Nations League A campaign in style.

Up next? Canada heads to the Estadio Olimpico Metropolitano to take on Honduras (June 13, 10PM ET / 7PM PT on OneSoccer). Here's what we learned from their first foray in this competition.

Match in a sentence: A needed interlude after a busy week.

For the first time in 205 days, or just under seven months, something special happened for Canada - Alphonso Davies donned the red and white in a competitive game, having missed out on Canada’s last six games due to myocarditis.

Already a special moment for that alone, when you also factored in that it was his long-awaited return to Vancouver, where he’d never played with Canada, as well as his first game against Curaçao since he made his Canada debut against them back in 2017, and everything seemed to come together nicely for him to create some magic.

That’d quickly prove to be true, as Davies then put up a dominant performance, nabbing two goals, and looking like the player that played a huge role in Canada’s World Cup qualifiers before his absence.

Not only that, but he did all of that in a bit of a new role - a free, attacking role, one that opens up all sorts of intriguing questions for Canada.

The #CanMNT's Alphonso Davies on playing all over the pitch for Canada:

"Wherever the coach wants to play me, I'm happy to play there"

John Herdman adds that he's a generational player, and that he loves the flexibility that he brings

To be fair, that role is not anything new for him, say, as he had been tried out in that sort of position before, but for the first time, it really seemed to just *click* for him, leading to a dominant performance.

Mostly deputized as a full back or wing back last year, except for rare flashes where he played up front or was tried out in that free role, his best performances usually came at left wing back, where he was able to run from deep.

But thanks to the emergence of regular left back, Sam Adekugbe, who slowly clawed his way into the starting discussion as qualifiers went along, before grabbing the role entirely in November, that then opened the idea of pushing Davies further up.

Especially as Adekugbe put up some dominant performance without Davies in January and March, further cementing his place in Canada’s XI, that only opened up that idea even further.

As a result, it led to it happening in this game, and if that’s anything to go off of… it’s an exciting development.

Not only does that allow Canada to keep Adekugbe in the lineup, giving them a strong threat from deep, but that also gave Davies the chance to just roam and do his thing, as he did in this dominant performance.

Because of that, don’t be surprised to see more of that going forward. As Canada’s head coach, John Herdman, noted afterwards, Davies can really make things happen when he’s freed up, with his versatility being a big asset for him.

Yet, for all of the talk about the goals and the Canadian attack, don’t sleep on the defence.

For the 25th time in their past 26 games, Canada managed to keep their opponent to a goal or less, all while picking up their 13th clean sheet over that span, continuing their quiet rise into a strong defensive team.

Despite playing in a 4-4-2, one that hasn’t got too much use over that run, they showed good flexibility to not miss a beat in that formation, looking quite organized. As a result, they kept Curaçao to just 0.28 Expected Goals (xG) on just five shots, none on target, which no matter how you cut it, is very good.

But that’s just another sign of what this Canadian team has become defensively - a no-nonsense group, one that no matter the opponent, their set-up, or any other factors, finds a way to get the job done.

Yes, Curaçao was missing several regulars, and was tired having played their third game this window already (compared to this being just Canada’s first), but even if you remove that out of the window, this is still a very solid side, one that was a stone’s throw away from the Octagonal.

Despite that, Canada kept them at bay for most of the night, doing a great job of limiting their time and space on the ball, getting numbers back whenever possible, especially in transition.

Ahead of Qatar, finding a way to keep up that philosophy is crucial, as while the opponents are only going to get tougher from here, maintaining strong defensive principles can go a long way, especially when you look at some of the attacking talents that Canada has at their disposal.

“It's definitely important,” Canadian defender, Steven Vitoria, said of his team’s defensive play. “It’s something that we take a lot of pride about. But it's definitely not just a defender or goalie thing, there's (the whole team) that puts in the work, so it's nice when we see things come together like this.” 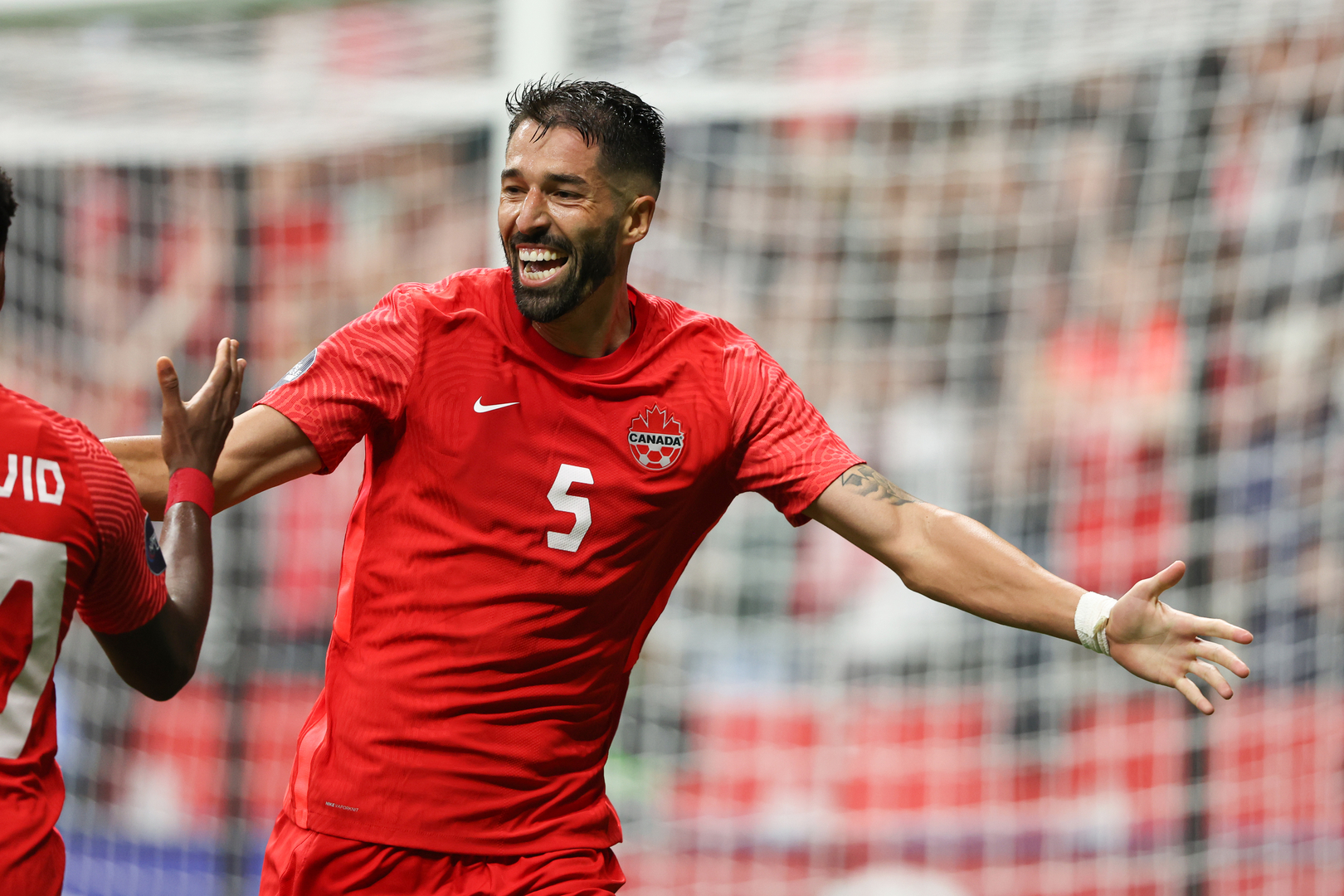 Imagine telling a CanMNT fan five years ago that in a game, Canada could bring on five subs of the calibre of Junior Hoilett, Richie Laryea, Sam Piette, Iké Ugbo and Lucas Cavallini, five players all playing at solid clubs in England, France and MLS? It felt impossible.

Yet, that’s what Canada were able to do in this game, allowing them to keep their foot on the pedal right to the very end.

For all of the talk of Canada’s stars, their depth continues to be a huge part of their success as of late, too.

“Yeah, we have to be able to keep that intensity for 95 minutes of the game,” Canada striker, Lucas Cavallini, noted. “The starters put in a hell of a shift, and then us, the finishers, we have to go in and finish the job. And that's, that's how everything panned out today, so everybody goes home happy.”

Player of the Match: Alphonso Davies

Even beyond his two goals, it was the sort of performance from Alphonso Davies that’s exciting, especially when you remember that Canada is going to grace the fields of a World Cup later this year.

To have any chance at doing well at those tournaments, having a star player can be massive, and Canada certainly has one of those at their disposal when Davies is on the pitch.

As he does, Johnston racked up another 90 minutes for Canada in this game, playing in his 23rd consecutive game for country.

Plus, he was impactful at both ends, showing some new growth offensively, a benefit of playing in a free wing back role for Montréal, all while looking his usual self defensively, making some timely interventions, including one when the score was just 2-0 early in the second half.

- With that 23rd consecutive appearance, Alistair Johnston climbed to 3rd all-time in CanMNT history in consecutive ‘A’ starts. Not bad for someone who was in League 1 Ontario in 2019.

- Canada now has a record of eight wins and one draw when Alphonso Davies scores. Clutch.

- Speaking of Davies, that was his third brace for Canada in 31 games. He has just two braces at the club level across almost 150 games with  Bayern Munich and the Vancouver Whitecaps. He doesn’t always score, but when he does? It’s big.

- Milan Borjan when wearing sweatpants for Canada: Five wins, one goal conceded, four clean sheets. The important question - can they be modified for Qatar weather?

---
A trip to Honduras awaits Canada now, who continue their quest toward Nations League glory with a visit to San Pedro Sula for a clash on Monday, June 13th (10PM ET / 7PM PT), where they have a chance to really put themselves in the driver seat in their League A group C with a victory.