When countries come together for a few weeks, put their heart and souls into their quest to try and lift a trophy while their fans fervently watch on from the sidelines, you truly see what these competitions are all about.

Yes, they can be incredibly challenging and heartbreaking, but they can also be extremely fulfilling and rewarding. The unique sprint of a tournament also creates the sort of drama and tension that some club competitions just might not be able to give you. And, of course, international tournaments have a unifying effect that club competitions can't quite replicate.

There's no better example of this phenomenon than when the FIFA World Cup comes around again.

One of the most unforgiving tournaments of all, it is also a magical stage that most dream of reaching one day. This is a tournament that can make and define careers; just being there can can be enough to alter the course of your career significantly, adding to the excitement of Canada's qualification.

While it's important to represent your nation proudly and enjoy the experience for what it is, at the end of the day, you do want to win - or, at least, put in your best effort towards doing so.

However, the Canadian men haven't had too many chances to do that over the last few decades, with their only participation in any non-Concacaf international tournament since the 1980s being the 2001 FIFA Confederations Cup.

As such, the CanMNT might want to lean on a team with a little more experience to give them an idea of what they might face in Qatar.

The good news? They don't have to look far to find it. 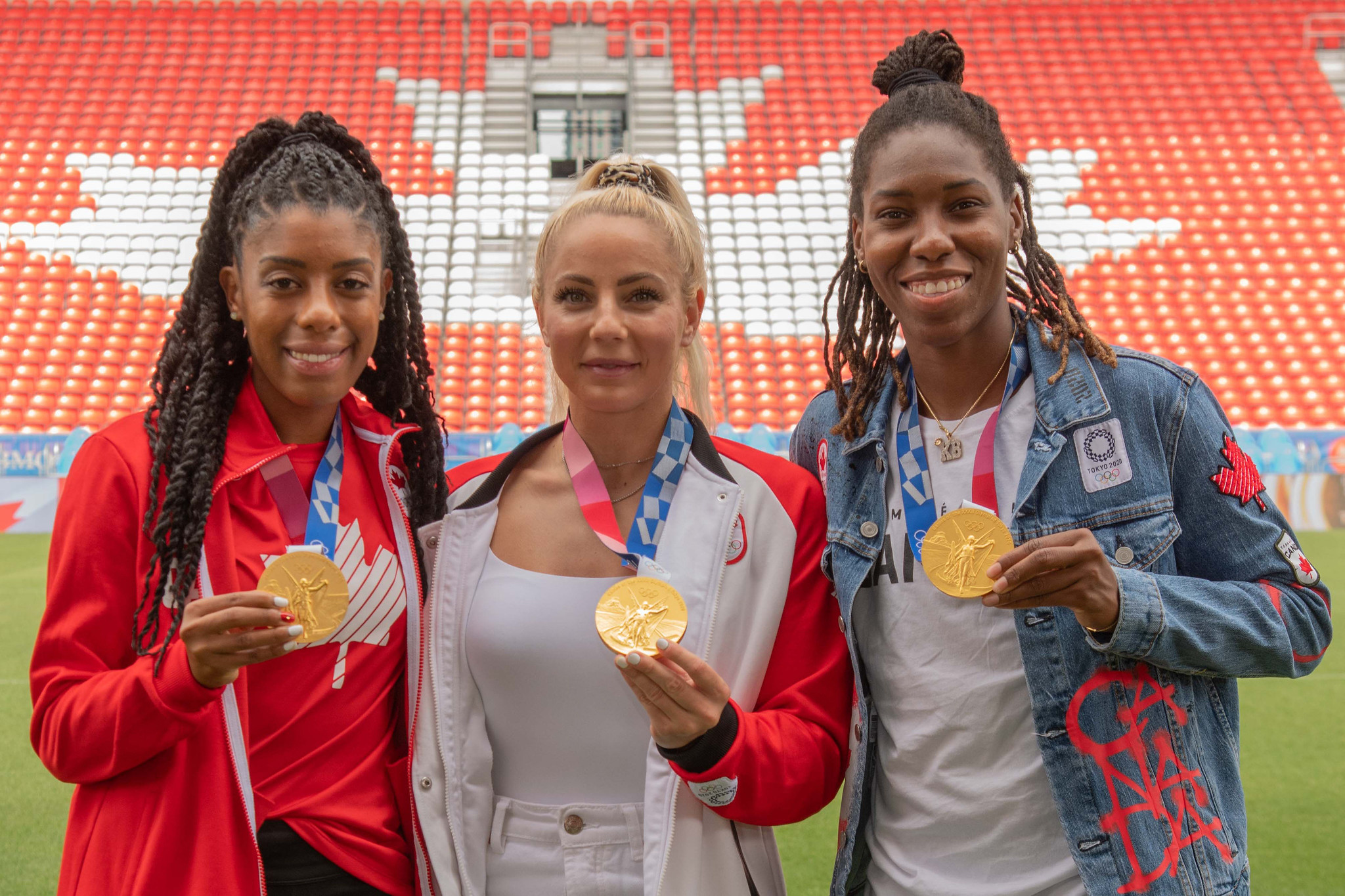 When the Canadian women's national team went into the 2020 Olympics in Tokyo, they did so with one singular goal: Turn their previous bronze medals in 2012 and 2016 into gold.

Famously, Bev Priestman and her players did just that, elevating the bar ten notches higher than ever believed possible for the CanWNT.

CANADA YOU ARE FINALLY GOLDEN 🇨🇦🥇

The two competitions are similar. It takes six wins to earn a gold medal, and seven to win the World Cup. Games come thick and fast.

Coincidentally, the CanMNT won't even really need to unearth too many secrets to the CanWNT's success, as their current manager John Herdman helped build the foundation for it during his own successful tenure with the women's team prior to his 2018 appointment on the men's side.

So, key lessons, then. Here are a few tips the Canadians can share among each other. 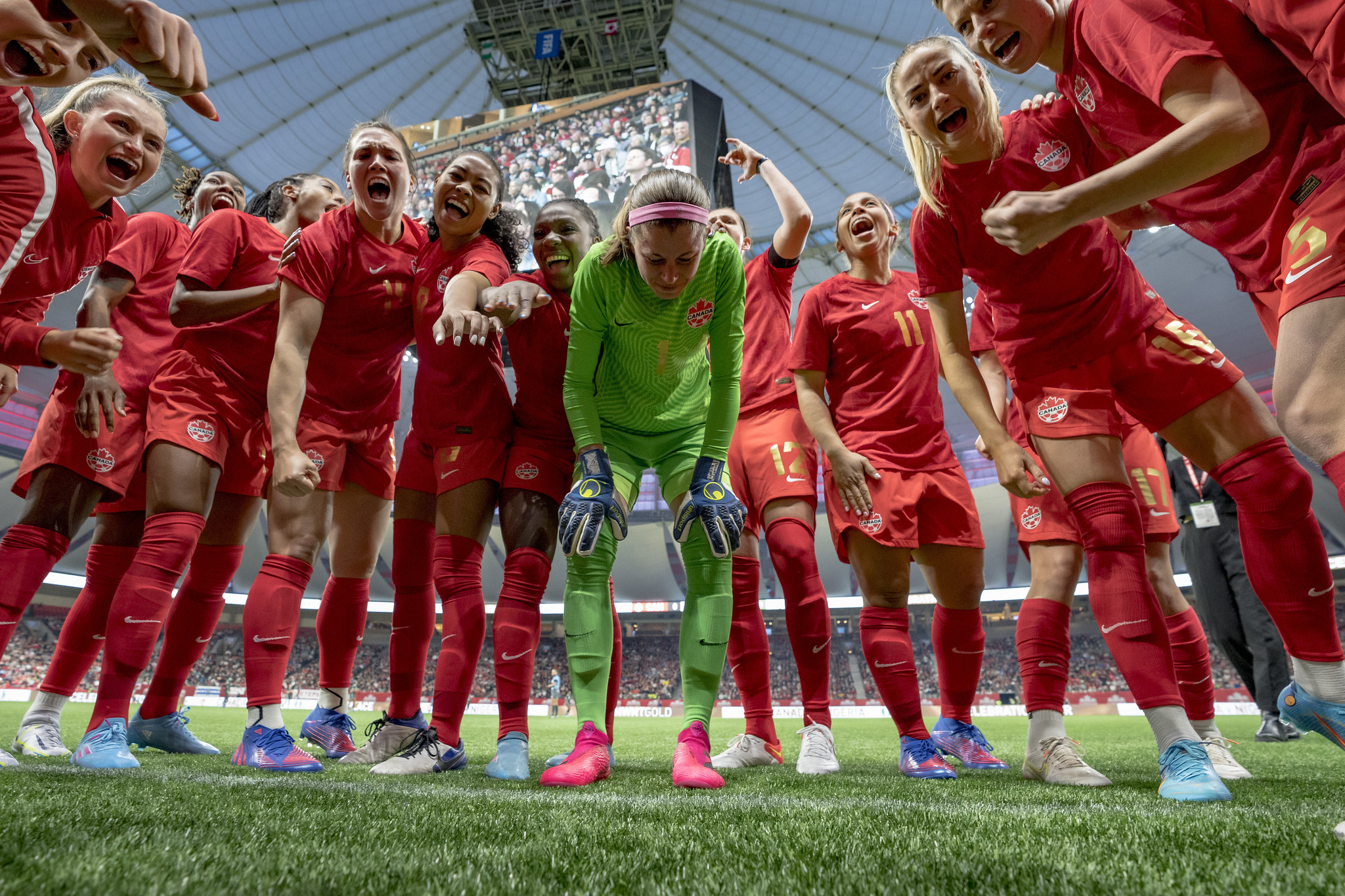 First up? Let's take a look at one of the most important advantages an underdog team can muster – squad harmony.

When the CanWNT won back-to-back bronze medals at the 2012 and 2016 Olympics, they were a close and tight-knit group under head coach Herdman, and that was no exception in 2021 under Priestman.

After some lean years under previous head coach Kenneth Heiner-Møller, reimposing a strong squad harmony and spirit was crucial to Priestman's successes. Given that she was hired less than a year before the Olympics, it left her with little time to adjust too much else on the pitch – at least, not to the point of truly settling in her tactical ideas among the group.

Instead, she made sure to instil belief back into her players after some had lost faith over the previous few years. That never-say-die attitude paid dividends down the road.

This lesson will be key for the brotherhood that makes up the CanMNT, and it's an area they're certainly not lacking in already under Herdman.

In fact, this may be Herdman's greatest strength, and exactly what Canada needed. It would have been easy to look for another manager with big tactical ideas like Octavio Zambrano or Benito Floro, but it wouldn't have addressed Canada's real, chronic issue; the air of fear, uncertainty, and doubt that too often hung like a dark cloud over their collective heads, reinforced when results did not go their way. A vicious cycle, as such.

Herdman's ability to carefully cultivate strong bonds of unity in his squads helped the CanWNT achieve a lot of their success. He's managed to carry that lesson over and bond the CanMNT into a true brotherhood over his five years at the helm, helping the team and its characters grow as players and as people.

In intense moments, you need to be able to rely on those closest to you; when you have a close and tight-knit squad, that confident backing can take you a long way.

The best offence? You know the rest 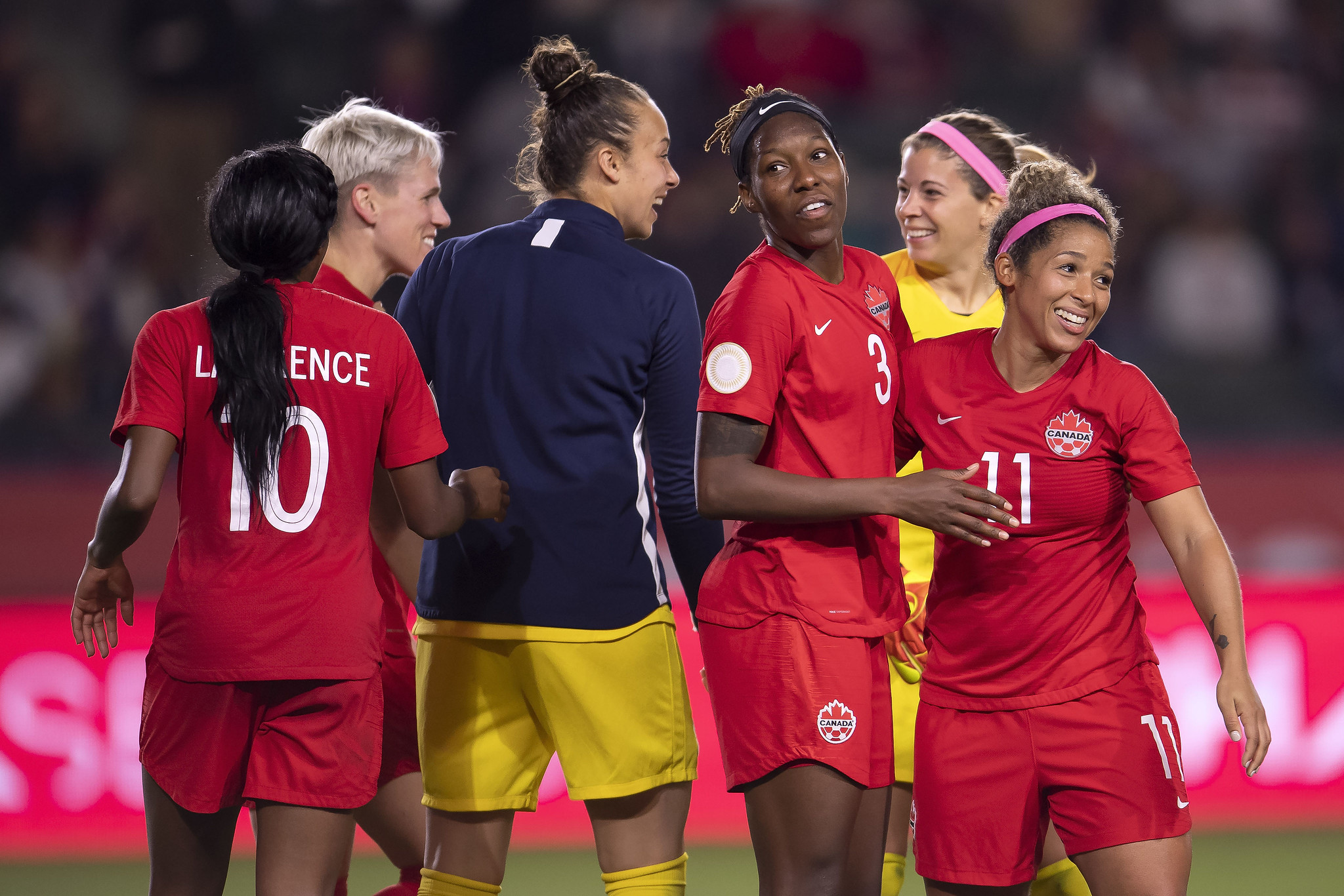 While team cohesion and chemistry can play a major role in overcoming adversity, harmony can only take you so far.

At the end of the day, you need to perform on the pitch, and that's where the next key element of the CanWNT's gold medal triumph lies: You need to have a solid tactical foundation, especially defensively.

The CanWNT might've leaned heavily into this one in Tokyo, playing quite defensively in their biggest games ... but it paid off, as not only did they end up winning, they did so without actually losing a game – an important distinguishment. Of course, that also meant picking up four draws in their six games, but with some penalty shootout luck, they saw things over the line, so no complaints.

Plus, conceding just four goals across their six games meant that scoring just six goals was all the CanWNT needed to complete the triumph, which itself is quite impressive.

Yet that just shows the importance of having a strong defence in these tournaments, as the CanWNT's stinginess gave them the platform they needed to ensure one timely goal would bring victory.

This holds true with the CanMNT, too. While Herdman's side boasts a lot of offensive talent, breaking down Belgium, Croatia, and Morocco presents a much sterner test. Sure, conceding just eight goals in 20 World Cup Qualifying matches means the CanMNT's backline can be confident, but this is another level.

And, as Uruguay exposed ahead of the World Cup, the CanMNT can't afford to miss their chances. They won't come as often.

As the adage goes, defence does win championships (as does strong tactical organization), so look for the CanMNT to lean into that. 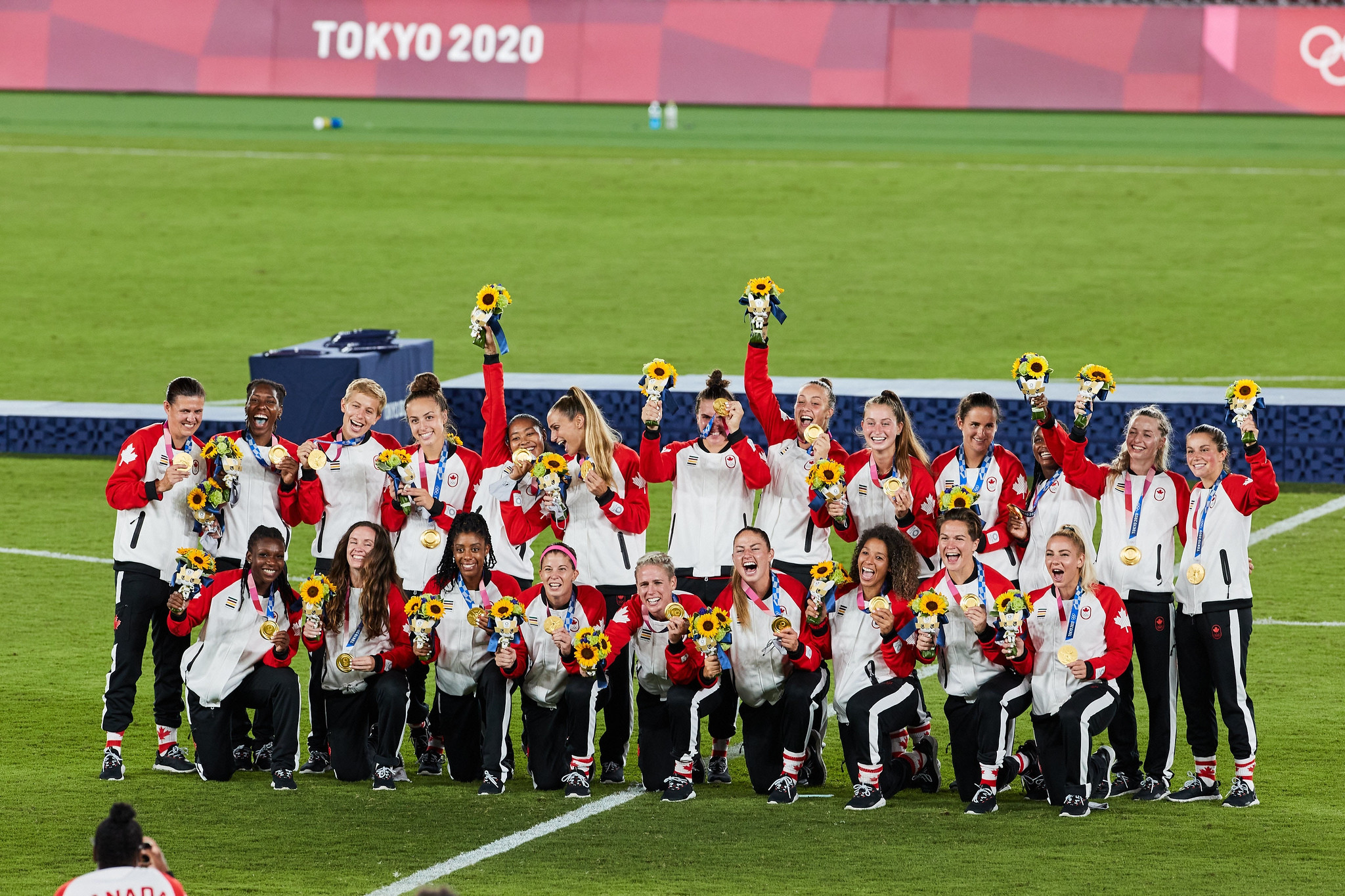 It might sound simple on paper, but in the end, you can only go as far as your best players take you, so it's important that you find a way to get the most out of them.

From Alphonso Davies, Jonathan David and Tajon Buchanan in attack, to Stephen Eustáquio in midfield, Alistair Johnston at the back and Milan Borjan in goal, the CanMNT can only go as far as their top talents take them, making it imperative that each and every one steps up.

There's very little wiggle room here. Cyle Larin can't dry up on goals now. Kamal Miller's got to be as solid as ever. Sam Adekugbe, Junior Hoilett, Richie Laryea, Steven Vitória, Jonathan Osorio, each have and will continue to play big roles for the CanMNT.

But in big games, you need your stars to shine bright – Alphonso Davies and Jonathan David need to perform.

Tournament soccer happens so quickly, you also need to hit the ground running. One bad game or two, and your dream could be extinguished, so it's imperative that you avoid those sorts of missteps early on in a tournament.

Nab an early win or draw against tough openers Belgium or Croatia, and you might just shock the world. Stutter, and things will be over just as quickly.

Either way, as long as the CanMNT approach the World Cup with the right mentality, they should have no problem; as the CanWNT showed, you can truly will yourselves as far as you want to go, and in their case, to Olympic gold.

Despite a mixed squad of different generations going to Tokyo with a new head coach, the CanWNT still showed they were able to rise above the noise.

Now, the CanMNT will look to emulate that, as this young group heads to Qatar with the intention of surprising.

Surprise the world. It's something they can most definitely do ... a task made just a little easier by heeding the lessons the CanWNT paved in gold along the road.