'We've made huge gains': CanWNT wrap up year of growth as focus shifts to 2023 World Cup

It didn’t end as they would’ve liked, but the CanWNT wrapped up a still-strong 2022 year on Tuesday with a 2-1 loss to Brazil.

Their 17th game of 2022, the result saw them finish the year with 11 wins, two draws and three losses, scoring 30 goals and conceding just nine, doing well to progress as a team, while picking up some crucial results along the way.

Ultimately, they fell short of one of their main goals, as they narrowly lost the CONCACAF Championships to the US 1-0, denying them a trophy and automatic qualification to the 2024 Olympics, but otherwise, they qualified for next summer’s 2023 World Cup, and have done well to begin preparations for that, reducing the pain of that sting somewhat.

Doing all of that despite struggling to put out a full squad for most camps, as injuries and other absences have hindered them throughout the year, it was a year for a lot of growth for Canada, who has continued to evolve their overall profile as a team.

Having learned a lot of key lessons along the way, they’ve done well to take those learnings and apply them in practice, something they’ll now look to keep doing as they turn their attention to 2023.

And there, they have a lot to look forward to.

For example, one big area where Canada has grown leaps and bounds since the start of the year is with their depth, as not only have they been calling in more and more new players, but a lot of those unknown faces have started to really make an impact for this team.

Now, in games, it’s not a surprise to see new faces thrown in off the bench to try and change matches, allowing Canada’s head coach, Bev Priestman, to get a better idea of what she has in her player pool.

By doing so, it’s certainly started to give her and her staff a bit to ponder when it comes to squad selection.

Before, it felt like only Canada’s first 15 players were written in stone, and then from there, a lot of question marks loomed after that. Now, there are arguably 25 to 30 players who could all get a shout for Canada’s World Cup squad, if not more, many of them capable of playing different roles for Priestman’s team.

“Yeah, I think they all had really bright spells, they all brought different things, and that’s exciting,” Priestman said of her depth this week. “The team has had different combinations, different players coming in through all of the injuries, since we’ve got quite a few players missing, but it’s given us an opportunity to assess new things and try out different starters and finishers, and they’ve all brought something different, and I think when you've got that in your team, it's a really good thing to have.”

From there, they add some of their missing regulars into that equation, such as Vanessa Gilles, Janine Beckie, Deanne Rose, Jayde Riviere and Allysha Chapman, and that race for spots is only going to get tighter from here on in.

“Yeah, I think the reality is that it’s not our (full World Cup) group, and I think you can only just look at that,” Priestman admitted. 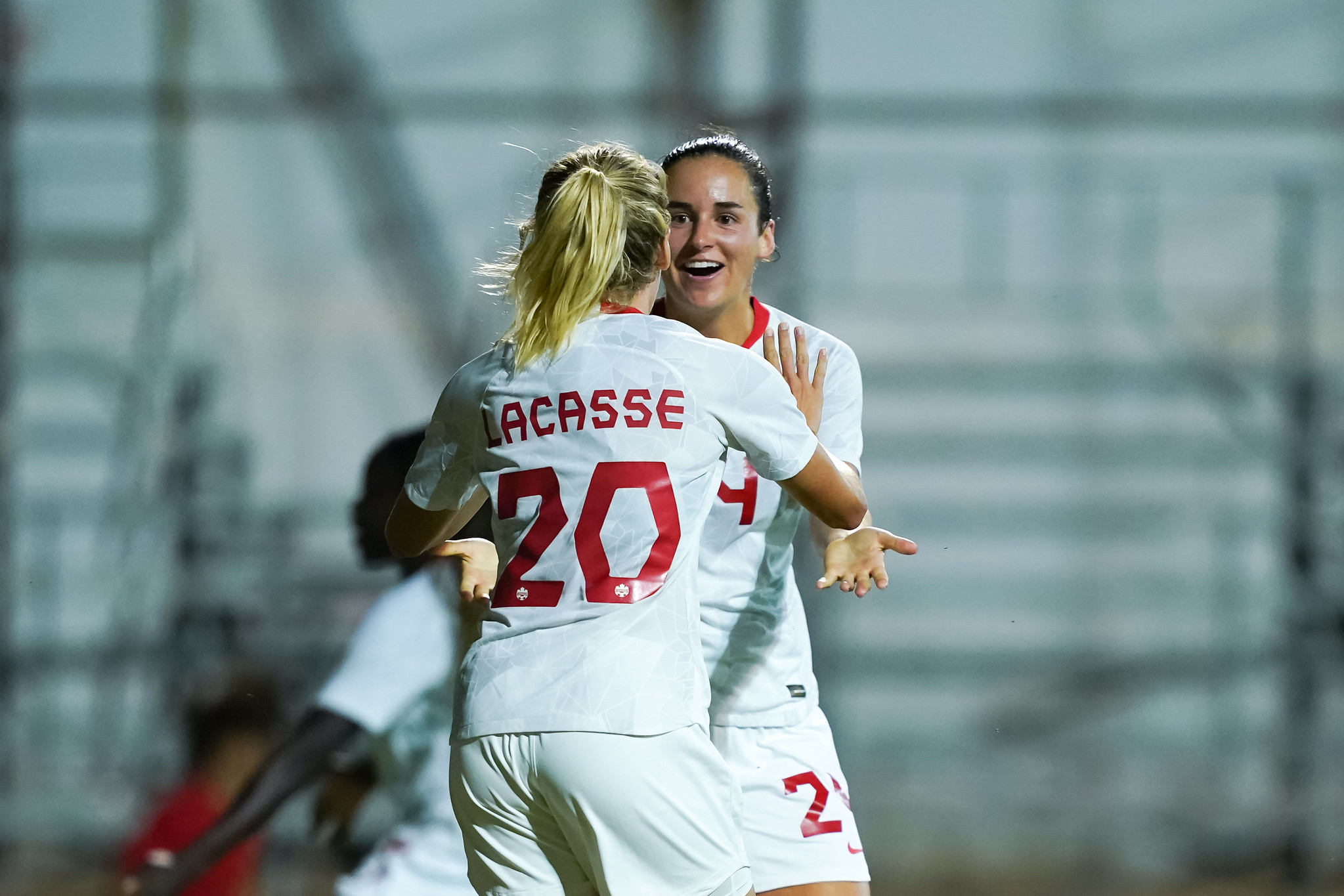 Despite all of the absences, however, what’s been most impressive about Canada’s year is how they’ve progressed tactically as a team.

Having started the year as a strong defensive team, one still figuring things out in the attack, Canada has continued to vary their tactical profile as the year has gone along. Especially following that tough defeat to the US at the CONCACAF Championships, where they’ve accelerated that process, Canada has become a much different-looking team as of late.

Now, armed with a new formation, a 4-2-3-1, as well as a new blueprint, one that sees them vary the way they build out of the back and control the midfield while still maintaining their usual defensive solidity. You add in big gains on offensive set pieces, as well as certain possession patterns in the final third, and that's really allowed them to completely shift their tactical identity as a team.

A team that was at risk of stagnating and falling behind as teams around the world evolved, Canada have ensured that won't be the case, and considering that they’ve done a lot of growing without a lot of their regulars, that’s something that Priestman is quite pleased with.

“We presented to the players today, as we did at the beginning of the camp, about where we've made huge gains,” Priestman explained. “And that's been despite the reality of us sometimes having seven players missing, with some critical players missing within that.”

A first-time volley stuns Brazil and the #CanWNT go up 2-0 before the half-hour mark!

So now, as her team turns her attention to the new year, they can be happy with where things are trending, knowing that they’re on the right track.

They still have some work to do in order to put everything together, as their learning isn’t done yet, but eight months out from the World Cup, they look well on their way.

For the time being, however, they turn their attention to February, where a big three-game camp awaits them, one that they’ll hope to get their full squad in for, then using it as a springboard for what’s still to come.

“I think that's the really exciting thing,” Priestman noted. “Seeing how I actually pick a World Cup team while factoring in all of the experience and the key players that have been missing across all of these windows.”

“I think we've made huge gains (this year), but I'm also excited to hopefully get the majority of what would be our core World Cup squad together in the February window so we can keep pushing forward and (keep building off of those) gains in many key areas.”

“We haven’t lost a lot of games, and in games that we lose like today, it’s hurt like hell because we haven’t done it very often.