'We have something to prove': Whitecaps hoping to shed underachievers label with 2nd Voyageurs Cup

AlexGangueRuzic
Canadian Championship
Vancouver have been meme'd on for far too long, but now, the Whitecaps are looking to make a new truth crystal clear – they reckon they're playing the best soccer in Canada these days, and a Voyageurs Cup would prove it.

VANCOUVER – It's been a long time since the Vancouver Whitecaps lifted a trophy.

Just under seven years since they lifted their lone piece of hardware as an MLS club, to be exact, back when Vancouver hoisted their one and only Voyageurs Cup as Canadian Championship winners in 2015.

Ever since? It's been little more than heartbreak and close-but-not-quite-enough for the Whitecaps, often losing out in cup competition in painful fashion ... especially in the Canadian Championship, an area where they've struggled massively as of late, going three editions without winning a game before this year.

Vancouver enters the semi-finals of this year's edition of the tournament, where they'll play CPL outfit York United this week for a spot in the final.

There's belief among the team that they're on the cusp of a proper course-correction. As such, the mission is clear: it's Voyageurs Cup, or bust.

"It's time for us to celebrate again," Whitecaps head coach Vanni Sartini told reporters on Tuesday. "It's time for us to put another banner in our locker room and to have a little bit of glory, glory that can also give us the ignition to finish the season very well, make the playoffs, and then make the Champions League."

It's a sentiment the players are echoing, too.

"We've gotten better and better each year,” Whitecaps veteran Tosaint Ricketts told OneSoccer. "That's all you can ask for you as a fan, as a player, as an employee – you just want to see growth over the years. You want to know that your hard work is paying off, and you can see that with this group, we're hungry, we're focused, we're getting better each game, so adding a Canadian Championship to that would be great."

Big win for #VWFC away from home. Just their 2nd away win of the year, and that was a fantastic road performance. Solid goals+defending

They have extra games, but they all of a sudden finish tonight tied for a playoff spot

In many ways, winning the Voyageurs Cup will cement the message that the Whitecaps have been trying to circulate over the past year: Things are different.

Rather than suffering through losses, Vancouver wants to be a team that thrives in those clutch moments; a team that can reach deep down and pull out the best version of themselves, heroic under the spotlight.

This team is also tired of being something of a meme for fans of other Canadian clubs, many of whom have taken to expressing liberties on the Whitecaps after some of their recent failures.

Toiling at the bottom of the MLS standings and losing to Canadian Premier League sides with regularity not long ago didn't help, of course. But... here we are. Fuel to the fire, no?

"I was thinking about that this morning, actually," Whitecaps midfielder Ryan Raposo told reporters. "I'd seen some sort of ranking earlier in the year that ranked us as the seventh-best Canadian club, something like that, so yeah…

He added: "I want to say we have something to prove because we're on the West Coast, and we're away from Toronto, so those types of teams are always getting the hype. So maybe we're on the other side, so people don't pay attention as much, but I wouldn't say it's anything to prove ... maybe just prove to ourselves that we're a good enough team and that we'll be able to lift the trophy hopefully."

For what it’s worth, Sartini had no qualms defending the club, either.

"It's good to have a high standard and not to be always satisfied with what we do," Sartini said of an urge to prove themselves. "But we need also to recognize that post-pandemic, we've been the best Canadian team in MLS."

Talk is cheap, of course. Proving it is a whole other step. Best in the country? It's step up time for the Whitecaps if they are to be taken at their word.

Having navigated the first two rounds of this competition – first dispatching Valour 2-0 at home before emerging from a tight battle with Cavalry as winners via penalties – the 'Caps have just two games left between today and lifting the Voyageurs Cup for a second time – both at home, if that helps.

As many around the world might know, there's no better way to catch the attention of others than by lifting a trophy at home.

"When you lift hardware, you're the center of attention," Whitecaps midfielder Russell Teibert told reporters. "I think it'd be a big accolade for this club to lift that trophy again. I remember all those emotions that went into it seven years ago, that's one of my top moments being here at the club, and I think it would be a beautiful thing to do that again.

"To win at home again? That’d be even better." 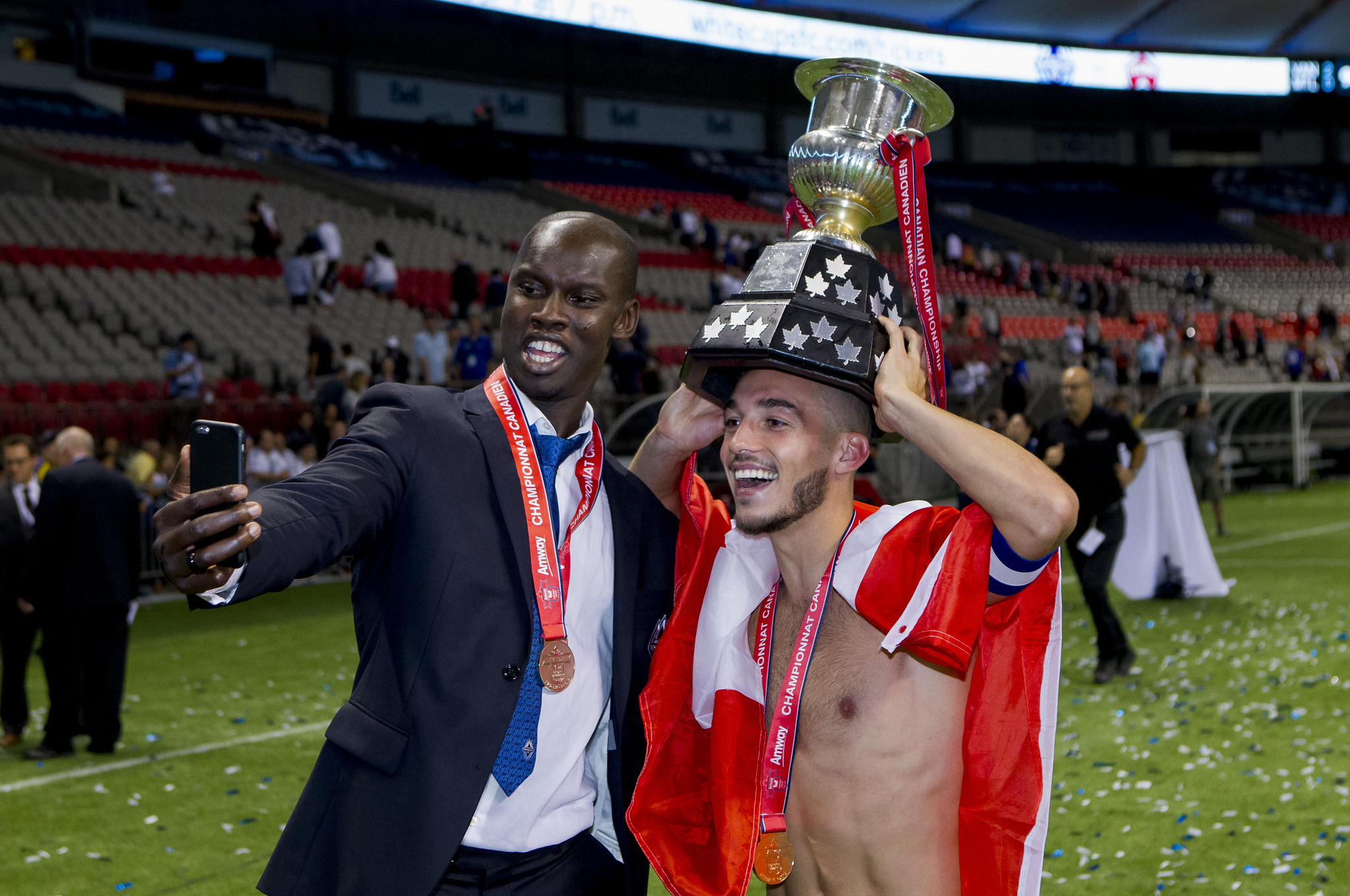 Therefore, the ‘Caps are looking to get the job done in style against York on Wednesday, before continuing that to whoever they’d face in the final in that case, allowing them to work towards that dream of lifting that trophy in front of their fans.

It's not something that they’ve done often enough in their club history, especially not in recent years, so no better time to change that than the present.

As someone who has had the chance to do that a few times with his old club, Toronto FC, lifting an MLS Cup crown and two Voyageurs Cup in front of their home fans, Ricketts did a great job of detailing what that feeling is like when asked, and is now looking to reproduce that feeling with his new club.

It’s a feeling unlike any other, and it’s something that Ricketts is eager to experience once again, especially on a Whitecaps team that has gone too long without doing so.

"I've done it a couple of times winning a cup in your home stadium. It's special, and I hope the fans recognize that and I hope that they come out to support that. I don't want to look past tomorrow, as we're happy to get a home match tomorrow and in the final, if we make it there–

–Or, when we make it there,” Ricketts confidently corrected.

Four teams remain in the fight for the Voyageurs Cup, as the 2022 edition of the Battle of the North nears its finale!

Join us on OneSoccer on Wednesday evening (7PM ET / 4PM PT) as Toronto FC and CF Montreal re-ignite their rivalry in search for a spot in the 2022 Canadian Championship final will play first for a place in the final.

Right after that? The Vancouver Whitecaps square off against York United (10PM ET / 7PM PT).

SUBSCRIBE to OneSoccer and don't miss a minute of Canadian cup action as we present the 2022 Canadian Championship semi-finals!