Thriving in Chicago, Bianca St-Georges chasing her 'best version' on and off the field 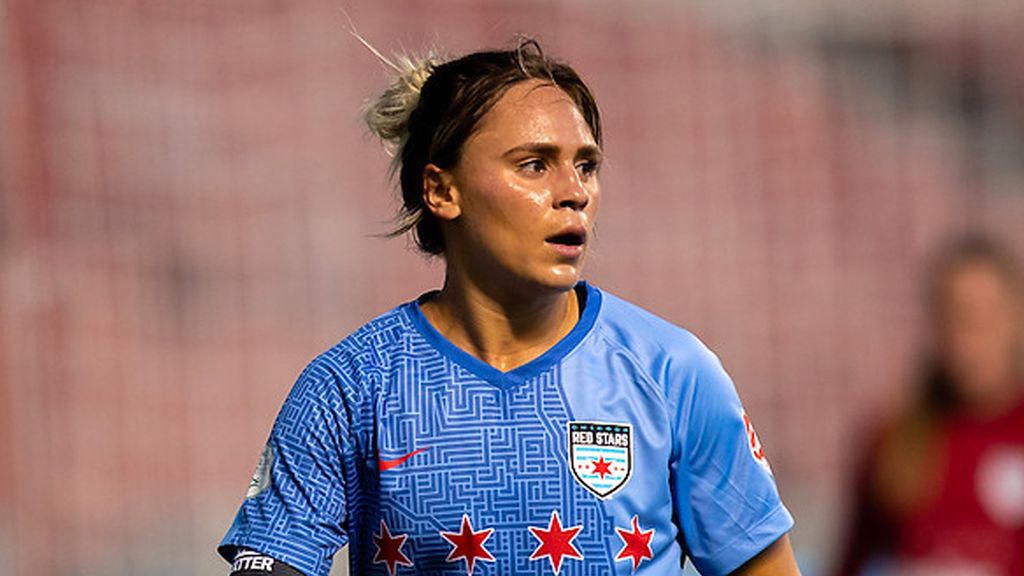 LOS ANGELES – Healthy and in the form of her career, Bianca St-Georges is enjoying life with the Chicago Red Stars.

After struggling with consistency and injuries in her first few seasons as a professional, St-Georges has put that all behind her in 2022, emerging as an everyday starter for the NWSL side this season.

"It's been my favourite season so far," St-Georges told OneSoccer this week. "I feel so connected to my team, I love the girls. We feel like a big family so I couldn't ask for better, I have great support."

Having already amassed nine regular-season appearances in 15 games – which is more than the eight appearances she put up in her first three seasons combined – things are looking good for the 25-year-old left-back these days.

Now almost a veteran presence on this hungry Red Stars team looking to turnaround from falling just short in the finals of the 2021 and 2019 NWSL playoffs, as well as the 2020 Challenge Cup, St-Georges is soaking up everything she can while trying to lead in any way possible.

"It's funny, it's my fourth season, but it feels like my first because of all the injuries I've had," St-Georges continued. "I wouldn't consider myself a veteran, but I try to lead in every way I can. So if I can be considered as some sort of leader I would be honoured."

2 goals in 3 league games for Bianca St-Georges, (to go along with a Challenge Cup tally), all from RWB for the Chicago Red Stars

Is that a #CanWNT/#CanXNT call-up we might be starting to smell… she’s certainly playing like it https://t.co/FF1Q7iDPZW

Yet, that perspective is a good reflection of the sort of wisdom that St-Georges has been able to mop up from her three previous years with Chicago, along with four years in college with the West Virginia Mountaineers.

There, she has already lived a career worth of experiences in such a short time, shaping her perspective as both a player and person.

One such example? The injuries and other adversity that she’s already had to deal with, which as mentioned earlier, ended up derailing the first few seasons of her NWSL career.

First, there was a knee injury in 2019, one that carried over from her college season, forcing her to start 2019 on the sidelines. Then, having made it back, the pandemic hit in 2020, further delaying her professional debut, which then came later in the year.

Lastly, there was 2021, where a call to Canada ended up seeing her injure her other knee, derailing the start of yet another NWSL campaign, leaving her to have to fight from behind from the beginning yet again.

Therefore, as she finally entered 2022 fully healthy, that only made her hungrier to go out and win her spot, ready to put those years of adversity behind her.

"Yeah, I think everybody that's an athlete understands how injuries can be hard for your mental health," St-Georges admitted. "But at the end of the day, you can let it put you down, or it can bring you back up and you have the choice to pick whatever, so I chose to learn from it and come back even stronger each time."

Now, that’s allowed her to carve out a pretty good role for the Red Stars now. Typically a strong full back, one who can push up the field, but without sacrificing defence, she got a big boost when her coach, Chris Petrucelli, switched to a three at the back formation.

As a result, not only did she break into the starting eleven on a regular basis, but she did so in an explosive wing back position, one that truly got to unleash her offensively.

And so far, it’s paying off for her. With two goals and one assist already this season, despite not scoring or assisting in either 2020 or 2021 (although she did score in the Challenge Cup in 2020 and 2022), she’s been truly unleashed for Chicago, slotting nicely into their system.

"Yeah, I love the wing back position," St-Georges explained. "It's different, it's dynamic and it's explosive. I feel like it fits my qualities pretty well. But I still have to remember that as a team, we're still learning that formation, it's a fairly new style of play, so I'm really grateful I get to be a part of this new style of play with the Red Stars."

Able to finally tap into the offensive potential that saw her score nine goals and add 13 assists in her college career, while still being able to defend at the sort of level that she showed in her first few NWSL seasons, it’s been a nice balance for St-Georges, who is seeing the benefits of this system manifest themselves in different ways.

"Yeah, it's extremely important," St-Georges said. "Because with the national team, I have more of a defensive position as a full back, but it's really cool because the wing back gives me a different perspective. And I can implement that with the national team when I'm there, so I think I get the best of both worlds."

And speaking of the national team, they’ve been quite pleased with her progress in this position. 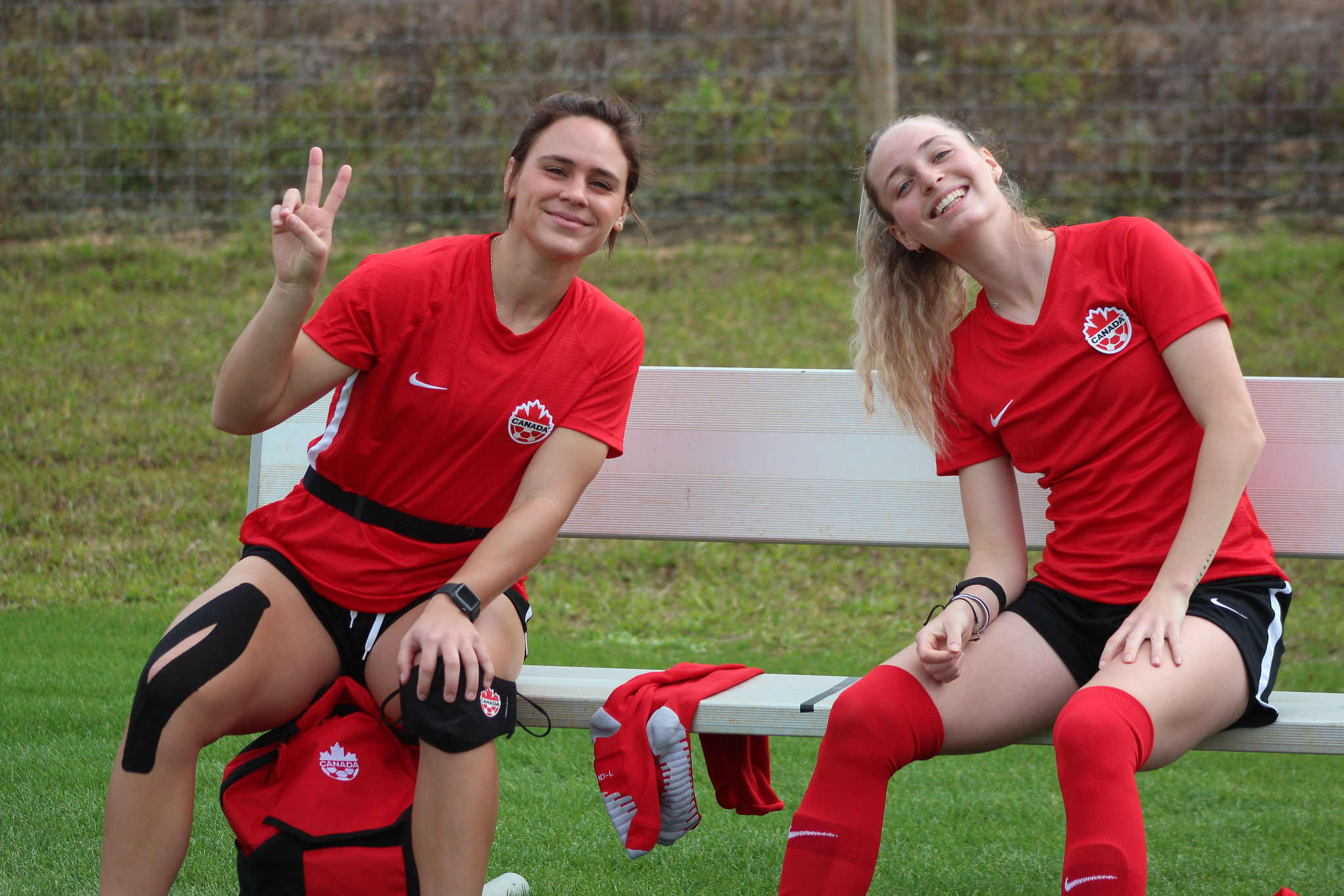 After breaking through sporadically in 2021, where she made her debut at the beginning of the year, she just missed out on making Canada’s gold medal-winning Olympic squad after her injury stalled the start of her season.

But with her form this season, St-Georges has clawed back into the Canadian fold, even earning a nod to the 2022 CONCACAF Championships, where Canada was able to secure qualification to the 2023 World Cup, as well as keep their 2024 Olympic hopes alive.

She didn’t play much, earning two games across the lead-up to the tournament and the tournament proper, but she showed that she can be a potential piece for Canada long-term, which was a huge plus for her.

"It's been amazing," St-Georges said of her time with Canada. "Honestly, it's such an honour to represent your country. There's nothing like it, so when you're there, you feel like you're really playing for something bigger than yourself, and there's no other feeling that mimics that, so I’m very grateful."

Therefore, with Canada’s World Cup campaign all of a sudden less than a year away, St-Georges is hungry to win a spot in their squad for that tournament, allowing her to add another chapter to her burgeoning National Team career.

Last sub for the #CanWNT/#CanXNT - Bianca St-Georges is entering for her 2nd cap with Canada, replacing Jayde Riviere

Excited to see what BSG can do. She's been in great form this season for Chicago. Earned her spot on this team

Yet, that is just one of many goals that St-Georges still has to accomplish.

Not just as a player, where she wants to win with the Red Stars and crack the National Team more regularly, but off the field, too, where she has long spoken of her aspirations to accomplish some big things.

From a desire to potentially be a doctor, as well as an entrepreneur, she understands that while she’s a soccer player now, that can change in an instant.

So while she aspires to be a role model on the pitch, she also is eager to show that being an athlete is so much more than what you accomplish in any given game, but as well as what you’re able to do off the field.

Through that, she knows that her story is just getting started, both on and off the field, which based on what she’s shown so far, makes her journey an exciting one to keep an eye on going forward.

"I think the most important thing is that you cannot focus on just being an athlete because we are more than athletes," St-Georges finished.