The CanWNT wrapped up another successful window in October.

After running the table in September, where they beat Australia in a pair of friendlies, Canada managed to keep that momentum rolling into another month as they beat Argentina and Morocco over in Spain this past week.

While maintaining their preparations for the 2023 FIFA Women's World Cup, which is rapidly approaching, Bev Priestman and co. continued to learn about themselves as a team in this camp, too.

With the World Cup now less than a year away, that is precisely what they need, as they try to find the next level that will be required for them to compete in that tournament.

And so far, through the four games that they’ve played since returning from this summer’s CONCACAF Championships, they’ve shown flashes of that, something that they’ll now look to continue into the camps that lie between now and next June for them.

Speaking of that next level, Canada's biggest need ahead of the World Cup remains clear - evolving tactically.

After mixed results at the CONCACAF Championships, where a disappointing loss to the US in the final exposed some tactical flaws, it was clear that Canada had to adapt tactically if they were to avoid being left behind in the global soccer hierarchy.

That’s a lesson they took to heart. That much was clear in the Australia camp, where they came out with a new-look 4-4-2, one that caught the Australians by surprise in Canada’s two wins over the tier-one side.

Because of that, it was no surprise to see them continue to tweak and adjust that philosophy in this camp.

Especially given that they were playing two opponents that were much different from Australia in Argentina and Morocco, this was a good chance for Canada to step outside of their comfort zone in these games.

Two World Cup-bound teams, Argentina and Morocco represented the sort of teams that have arguably given Canada the most trouble over the past two years - plucky non-European sides that are intense off the ball, while direct and ruthless on the counter.

It may sound outlandish at first, but the numbers back that up. Since the start of the Olympics last year, Canada has a record of 4W-5D-2L against tier-one teams, versus a record of 4W-3D-1L against non-CONCACAF non-tier-one teams (before this camp), showing that these sorts of opponents have caused trouble for Canada as of late.

As results against Mexico (draw, loss), Nigeria (draw) and South Korea (draw) showed, a blueprint for success against Canada has been teams that have been able to stay organized and disciplined below the ball.

POST-GAME ANALYSIS 🎙@AndiPetrillo, @plattoli and @Amy13walsh break down the #CanWNT's 2-0 win over Argentina, and highlight lessons learned from the first of two friendlies of October

Yet, that didn’t mean Canada was totally hapless against those sorts of teams. For example, in their four wins, which came versus New Zealand (x2), Nigeria and Chile, they scored first in all of those games, something they failed to do in any of those aforementioned draws and losses.

Therefore, finding a way to score first more consistently in these sorts of games was a must for Canada, because if not, it had been proven that they could get frustrated by this sort of match. And, by scoring first, it doesn’t mean scoring early - just being patient enough to be the team that scores first was a must, with early goals being more of a bonus than a demand.

If this camp is to be an indication, they’re on the right track.

In the Argentina game, they had to sweat for their opportunity, finding a way to breach their opponent’s defences in the 68th minute, before cruising to a 2-0 victory. Then against Morocco, they scored in the 24th minute, and had fun the rest of the way in a 4-0 victory.

Not only that, but they showed a good approach in each situation, too.

First, against Argentina, they struggled to break down a physical Argentine defence, looking a bit off in their 4-4-2 compared to the last camp. Yet, despite that, Canada made some crucial half-time adjustments, which saw them shift to more of a true 4-3-3 with a midfield trio, and that proved to be the dynamite that the game needed to break open.

Then, against Morocco, Canada went with that 4-3-3 from the start, while rewarding some of the names that fared well against Argentina. Doing well to learn from what hindered them in the first game, that led to a much more fluid performance in the second game, as indicated by the scoreline.

“This is why we did (what we did) this window,” Canada’s head coach, Bev Priestman, said after the Morocco game. “Because there is something around playing teams with that style, and when we have more of the ball, how do you keep your standards, your intensity, your tempo high, because we don't struggle with that when a team has that against you. So it was a valuable experience.”

Yet, that’s a credit to the tactical tweaks made by Priestman. For example, the midfield switch from a duo to a trio was very shrewd, as while it mean moving away from the Jessie Fleming and Julia Grosso pivot that had been so successful in September, it compensated for the absence one of the factors that made that Fleming/Grosso duo tick - Christine Sinclair, who missed out on this camp.

Realizing that Sinclair was a big reason why Canada was able to switch to that 4-4-2 in the first place, with the work she does to link together the midfielders and the frontline being crucial, Priestman switched to the 4-3-3 to make up for that.

And those are the sort of adjustments that Canada will be happy to see have been made. As seen in these last two camps, they’re starting to look more like a team that is playing the progressive, fluid soccer that is required to play the modern game, from front to back.

If they can continue to find that balance over the next couple of camps, that will be key, as those offensive tweaks will be exactly what they need to keep getting a lot out of an offence that had seemed like it wasn’t firing at its maximum potential before. 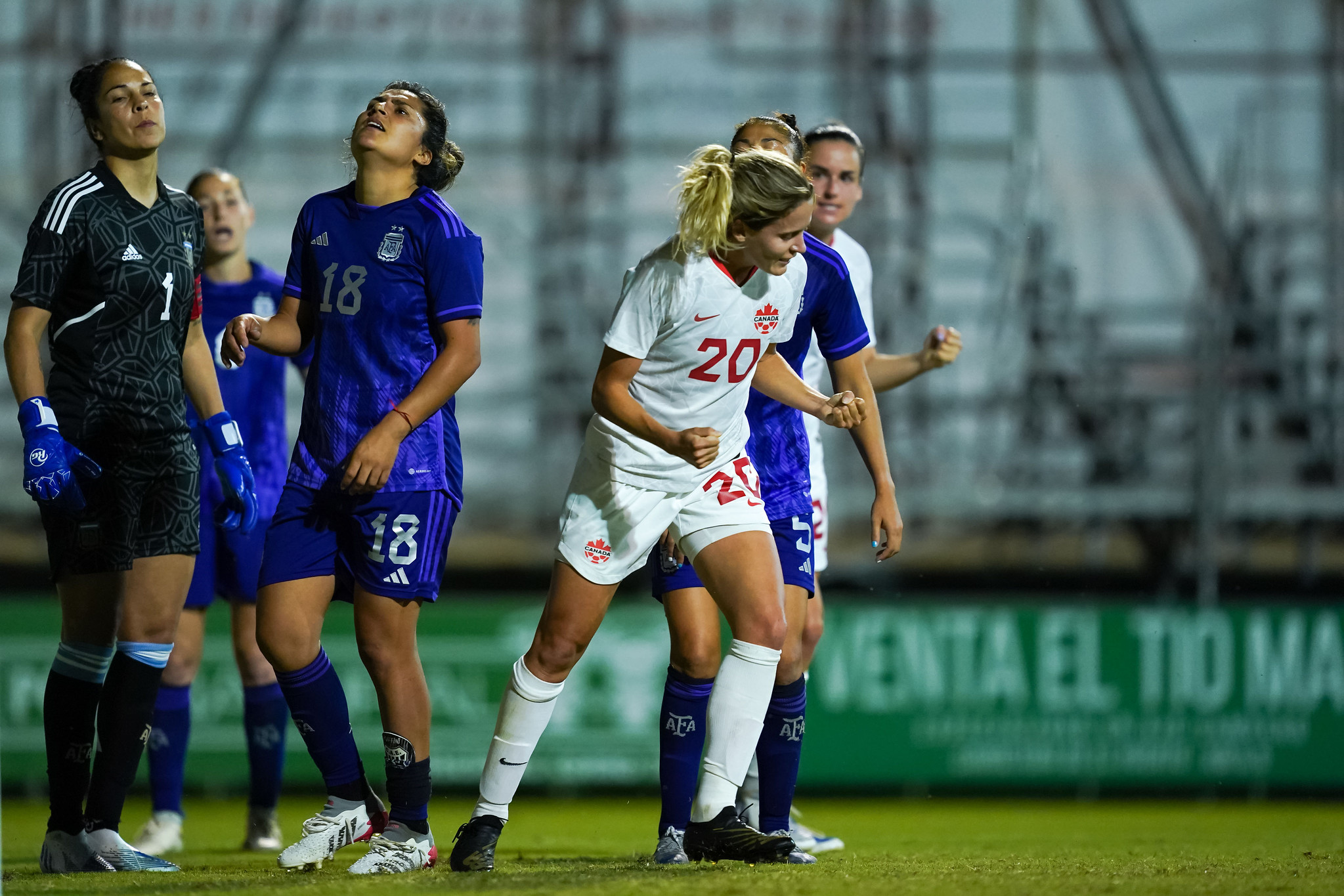 While Canada’s tactical tweaks made a big difference in the success of its offence, there was an individual that proved to be quite influential for them offensively this camp - Évelyne Viens.

Making her return to the Canadian fold for the first time since June, she was someone that many had a close eye on heading into this camp, as she entered these friendlies filled with confidence after a strong campaign to date in Sweden, where she has 20 goals and 9 assists in all competitions.

Plus, with Priestman noting that Canada’s new system was one she felt that Viens could shine in, you felt like it was only a matter of time before she’d get a chance to prove what her strong year in Sweden has done for her confidence.

Turns out, it’d take mere minutes, as after being inserted as a halftime substitute in Canada’s game against Argentina, Viens almost immediately broke things open.

First, she had the shot that directly led to what would stand as a game-winning own goal, before then also having the shot that would fall to Cloé Lacasse for the insurance marker, directly involving herself in both goals even if she didn’t have a goal or an assist to show for it.

Then, having done enough to prove herself in that Argentina game to earn a start for the Morocco game, there she really shone. Starting with a goal and an assist in the first 60 minutes, before playing the final ball on Clarissa Larisey’s second-half marker (she didn’t get an assist as Larisey’s initial shot was saved), that saw her directly involved in three goals, meaning that she played some part in five of the six goals that Canada scored this camp.

Evelyne Viens makes it TWO for the #CanWNT vs. Morocco with a perfect header off a follow-up cross by Sophie Schmidt

For a forward, it doesn’t get much better than that.

Yet, that shows why many have been calling for Viens to get that shot with Canada. In terms of forwards who are making things happen in the final third, there haven’t been many better than her, and her production this camp is just a continuation of that.

And as she continues to work on her game over in Sweden, it feels like more is to come, so it’s likely we see a lot more of Viens in a Canadian shirt, leading the line in their new-look system.

“Yeah, Bev and I had meetings, and it was good just to know what she wanted me to work on,” Viens said. “Defensively, there were some adjustments, as well as offensively, seeing how I can help the team in the build-up.”

“So those were the two main points, and I think I took those windows where I was not getting called in just to keep working and find a rhythm in Sweden, so when I was called back I was quite happy.”

“I've just asked her to relax and do exactly what she does at her club,” Priestman added. “And she's done that, so I've been really happy for her, I’m over the moon, because she's gone away and worked hard.”

Viens is a great example of the sort of Canadian player that seemed to thrive in this camp - those who are not quite guaranteed a roster spot at the World Cup.

And if one thing is clear after this camp, it’s that the battle for those spots are going to be quite fierce. No matter if Canada is able to bring 23 or 26 players (it’s yet to be announced how big squad sizes will be), there are a lot of names who have thrown their names in the hat to be included in both cases.

Especially at full back, in midfield, and on the wing, there have been a whole host of names who have put strong claims for themselves in the past two camps, making it intriguing to see how those battles shape up going forward.

So while there appears to be a group of around 15 or 16 whose spots at the World Cup are unlikely to be in doubt, those battles for spots 17 and onwards are shaping up quite nicely.

Because of that, keep an eye on how things develop for players like Lacasse, Larisey, Simi Awujo, Sophie Schmidt and Bianca St-Georges, as they certainly put up a good account of themselves in this camp.

In the end, it feels like something will have to give at full back, in midfield and on the wing, so it’s clear that those in those positions will have a lot to prove over the camps to come, at least if these last two camps are to mean anything.

“It's getting more and more exciting as a coach,” Priestman said of the competition. “You look down your bench and know that no matter who starts or who finishes, you know that the whole team can contribute towards the win.”