The final test has been completed – and Canada passed with flying colours.

Heading into the last match of their preparations for the 2022 FIFA World Cup, the Canadians were looking to answer a few key questions against a tough Japanese team, with one eye toward Belgium on Nov. 23.

Having had such a fantastic qualifying campaign, Canada's positive momentum had been halted in the last few windows as a few tough results exposed a few key vulnerabilities within the squad. Factor in some lingering injury doubts surrounding some of Canada's most important players, and concerns began to mount as Les Rouges got set to take on a very good Japan side ranked 24 in the world.

This was the same Japan side that played the United States off the pitch in September, and had shown well in games against top sides such as Brazil. As such, it was expected that Canada would be in for a good test, doubly so when two Canadian key regulars, Alphonso Davies and Stephen Eustáquio, would be missing.

Despite that, Canada found a way to get the job done. Yes, it was against a Japan team short a few regulars themselves, but to see Canada grab a late 2-1 win after trailing early is huge, as they finished their World Cup preparation in style with a positive result – capped off by a dramatic 94th minute panenka.

Here's what we learned from this one:

Chalk this one up for some key lessons learned, at just the right time.

Canada has been working to refine how they approach transition moments, as they've conceded most of their goals off sequences where they were outnumbered on a break, allowing their opponent to run at them in space. Not only that, but a lot of those moments were self-inflicted, as Canada has also been prone to some big turnovers when playing out of the back, which is less than ideal.

Heading into this game, that was a big worry, as Japan has a lot of speed out wide, and likes to press high, meaning that Canada was going to be potentially exposed to a lot of transition moments if they didn’t clean that side of their game up.

The good news, however, was that Canada ended up playing one of their cleanest games in terms of how they played out of the back and defended in transition since qualifying, allowing them to nullify some of Japan's biggest threats with their play in both of those areas.

In possession, Canada were a lot more methodical with their approach, varying when they'd choose to try and play out of the back in possession, or go long with the ball, making it hard for Japan to destabilize them with their press.

Then, when Canada did lose the ball, they'd get back in numbers, making sure to get numbers behind the ball, limiting space for Japan.

For example, even on Canada’s late winner, which came from a 94th-minute penalty, that penalty was only able to happen because Canada actually won back the ball in a key transition moment less than a minute earlier, doing well to get eight players behind the ball in order to nullify a Japan counter-attack despite tired legs.

One thing you surely love to see if your John Herdman?

His team getting 8 players behind the ball in the 92nd minute of a friendly in the scorching Dubai heat, snuffing out a transition moment

Huge defence from the #CanMNT

You factor in that commitment along with one slight tactical tweak, one that saw Canada drop one of their midfielders into their back three in possession, ensuring that they’d avoid having both midfielders get caught high up the pitch as they did several times against Uruguay, and those two factors paid off big time for Canada.

There are still some tweaks for Canada to now make in possession, as they need to find a way to win more second balls if they do go long, an issue that plagued them on Japan’s first goal, and they’ll also need to find a way to be more direct and decisive when they break lines of the press, but they’re trending in the right direction.

And as they get set to face teams that are going to be very organized defensively, and eager to punish Canada for any mistake that they make, to see them clean up the side of their game that is most prone to being exposed is key.

Now, they just need to do that, and clean up their passing game even more, as they look to try and catch Belgium, Croatia and Morocco by surprise in Group F action next week.

Meanwhile, another big factor that head coach John Herdman will be happiest with about this victory? Canada finding their offensive legs against a good team, something that will give them confidence that they can indeed score goals at this World Cup.

Ultimately, the goals were nothing to write home about, as they first got on the board with a well-taken set piece that ended with a Steven Vitória goal, before scoring a late penalty, but after being shut out by Uruguay in September, to see them score against a World Cup-bound team is positive.

Especially when you see the confidence that Canada was able to gain after the Vitória goal, which came in the 21st minute, and you can see that they’re about to burst the dam in open play.

STEVEN VITORIA from the corner! 😎#CanMNT equalize 1-1 vs. Japan as Vitoria connects on the set piece at the 21st minute

And given that Canada was able to generate 17 shots, that further seems to reflect that, although turning those shots into chances and goals is a must, as putting just three of those shots on frame reflects.

Yet, there were a lot of positives to glean from those offensive improvements.

Tajon Buchanan and Jonathan David, in particular, were extremely lively in attack, causing all sorts of problems for Japan with their tricky footwork and eagerness to take on defenders, combining for five shots and two key passes between them.

As a result, that allowed Canada to get into some dangerous areas in the final third, especially  in wide areas, where they seemed to be a threat for Japan all night long.

Now, they've got to try and be more decisive with those opportunities, yes, but it’s coming. Seeing that they’ll be getting Davies and Eustáquio back, two of their most dangerous players in the final third, that will only help, given that it’ll also free David to focus more on playing as a finisher.

And with Buchanan, Davies, Eustáquio and Junior Hoilett all likely to be providing him service, you have to imagine that’ll be a role that could see David thrive in, which is not bad news at all given that he’s been one of Europe’s top scorers right now.

You factor in Canada’s growth in set pieces in this game, as they seemed to turn every corner and free kick into a dangerous chance for one of their players… and that’s further indication that goals could be on the way for Canada.

So although the offence as a whole remains a work in progress, there’s a lot to like if you’re Herdman, with this game showing that things are trending in the right direction for his team in that regard. 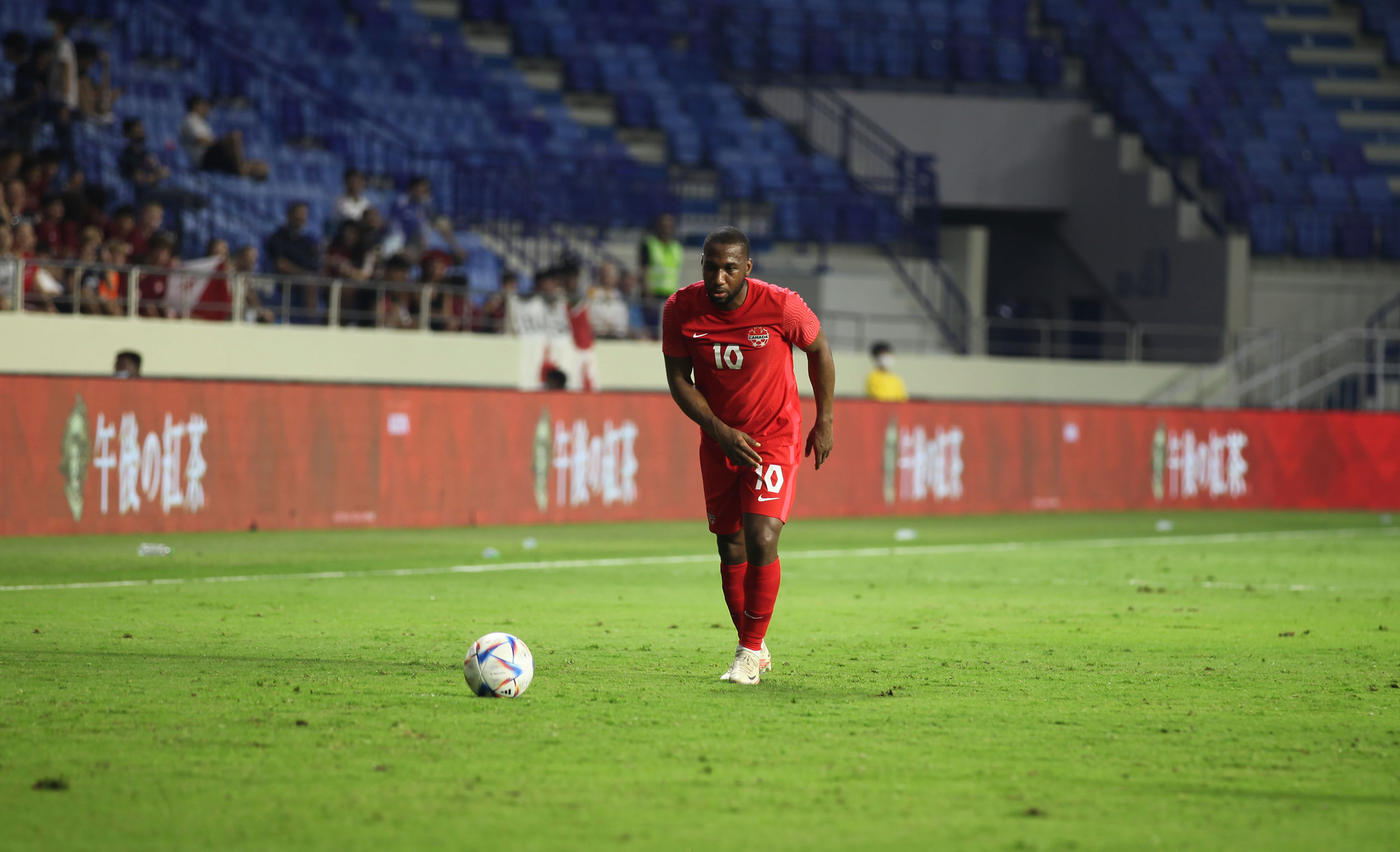 Lastly, speaking of Herdman, he’ll certainly be intrigued by how some of his players continued to make his task of selecting a lineup for that Belgium match as tough a job as can be.

Obviously, missing Davies and Eustáquio opened the door a bit in that regard, but even then, there was a lot for Herdman to ponder following this game.

For example, Junior Hoilett may have just grabbed a starting spot in that Belgium game against Japan, as he was a creative force for Canada in this game, racking up four key passes and looking dangerous every time he was on the ball.

Meanwhile, Richie Laryea had another promising cameo off of the bench, proving to be the injection of life that Canada needed to win the game, something he further proved when he won the penalty that would end up being the winner.

Otherwise, as he’s tended to do as of late, Ismaël Koné was cool, calm and collected in midfield when he came on, doing well to bring a calming presence to help Canada play through Japan’s presence, finding some good pockets of space.

Between those three, they’ve all certainly shown that they could at least be in the running to earn a spot for the Belgium game, if not claim one outright, giving Herdman a lot to think about as his full lineup gets healthy.

Yet, that’s not a bad thing to have. After having a lot of his MLS-based squad look rusty when they drew Bahrain last week, most who saw the field against Japan did not have such issues, which shows that the work that they’ve put in during training in the last few weeks has most of them back to their usual levels.

Because of that, that’ll make the next few days of preparation that much more intriguing for Herdman. Likely, he knows who 9 or 10 of those starters for the Belgium game are already, and is just working out who might round off that group, and who might have to settle for bigger roles off of the bench.

Some good news on two key fronts for the #CanMNT, as Josh notes from the presser:

-Alphonso Davies is joining the group Friday and will be assessed then
-Stephen Eustáquio’s absence was precautionary, and shouldn’t be anything too serious

Good to hear for those https://t.co/QzPbc7S7vJ

And now, he can do that task knowing that a lot of key players put in shifts to at least prove themselves of being one of the likely 16 players that will see the field at some point in that game.

As a coach, you can want nothing more, showing why he’ll have to be happy with how this friendly turned out for his team, even beyond the result.