Takeaways from Canada's mixed group stage at CONCACAF U-20 Championship 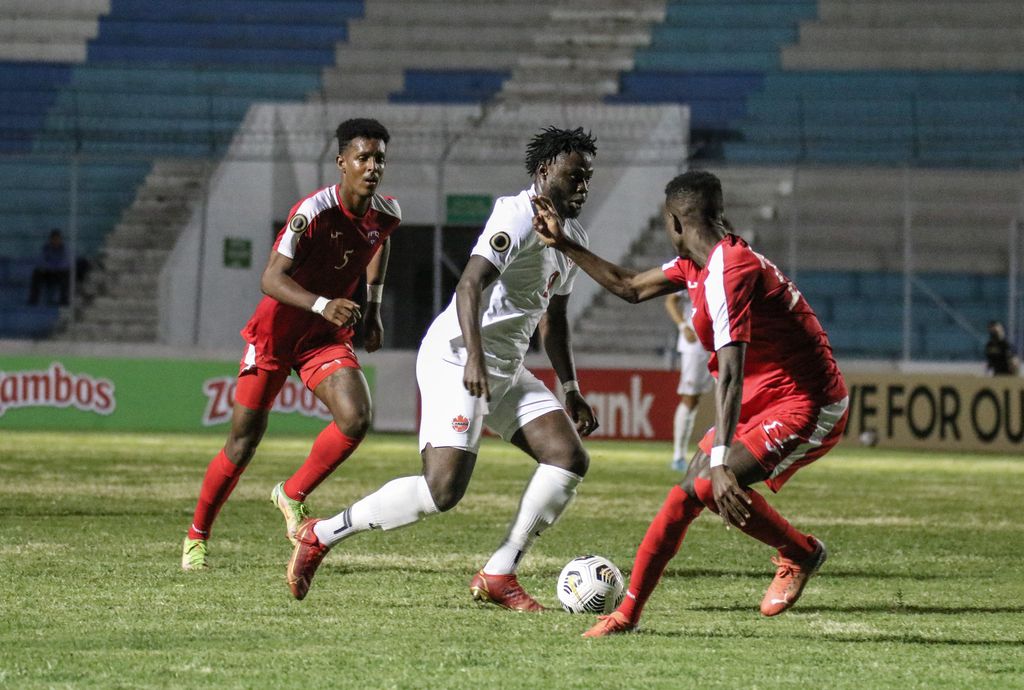 VANCOUVER – The first leg of the journey is now complete.

It might not have gone exactly how Canada's U-20 men's national team drew it up at the start - far from it, really - but after three games, the junior Reds are still alive at the CONCACAF U-20 Championships ... which is all they could ask for at this stage.

Despite starting the tournament with a major scare, losing to Cuba 1-0 in their opening match, Mauro Biello's team recovered to draw the United States 2-2, and then beat St. Kitts and Nevis 4-0 to round off their group stage, thus progressing to the knockout round as a third-place team.

Now, things are quite simple for Canada as they get set for the Round of 16 - win two more games, make the semi-finals, and nab a spot in the FIFA U-20 World Cup. Do that, and you can focus on the secondary goal of making the final to book a place at the 2024 Summer Olympics, too.

As Canada gets set for their Round of 16 tie against one of El Salvador, Panama, Guatemala or Aruba, here's a look back at some of what we can take away from this group stage.

Breaking down backlines a concern?

Be it a lack of chemistry, nerves, the pitch, or all of the above, one clear trend has emerged with Canada so far this tournament - they've struggled to break down opposing teams, especially when those sides are set up in deep blocks.

It was something that cost this team against Cuba, and almost cost them against St. Kitts and Nevis, as they just struggled to come up with clear-cut chances in front of goal at times.

Despite holding 72 percent possession against Cuba, Canada was only able to generate 13 shots, just two of them on target, failing to breach the target. Then, against St.Kitts & Nevis, they took a step forward by generating a whopping 31 shots (13 on target) by holding 78 percent of possession, yet didn't score until the 59th minute – though they did then turn those chances into four goals.

Yet, against the U.S., despite holding just 28 percent of possession, Canada generated a mere six shots (three on target) but were still able to score two goals, all while looking pretty lively in transition. It shows that it's not necessarily the opposition that's causing them trouble, but more so the style of those teams.

Plus, it also shows that this Canadian team is currently most comfortable when they're without the ball, best-suited at running into space when they win it back.

That's not a bad thing, as being dangerous in transition is important, and can serve teams well in bigger games.

But for a Canadian side filled with solid offensive talent, it feels like they could be doing better in possession than they currently are showing.

So far through three games, a common theme is a lack of movement in the final third, hopeful crosses, and a lot of hesitation on the ball, making it easy for teams to get behind the ball and defend them. There are glimpses of the movement needed to change that, coming in some of Canada's most dangerous moments, but those have not been consistent enough to cause teams a lot of trouble.

It's something for Canada to work on ahead of their Round of 16 tie. Considering that they'll likely see a lot of ball in that game, there's a strong chance that they'll need to break down their opponents to win once again, especially if those teams got their hands on any of Canada's game film from the group stages.

As a result, finding a way to generate more movement and get the likes of midfielder creators Justin Smith, Rida Zouhir, Matthew Catavolo, Kamron Habibullah and Jesse Costa to pull the strings has to be a priority in that game, as that'll then hopefully free up forwards Lowell Wright, Hugo Mbongue and Tiago Coimbra to get into dangerous areas where they can score.

If not, it could be a short tournament for Canada, especially if the first few games are to be any indication.

Of course, making it out of the group was always going to be the priority, but it was also strongly hoped that Canada could make it out as a top-two team, further aiding their chances of getting to the semi-finals (and nabbing that berth to the U20 World Cup that comes with that).

So while Canada will be pleased to still be in the hunt at this stage of proceedings, they've got a tough path to the final four now, due to being a third-place finisher in Group E.

Plus, should they make it through to the quarter-finals, they'll play the winner of the Round of 16 tie between Puerto Rico and the first-place finisher in Group F, likely to be; Mexico, who, as a reminder, has missed just three U20 World Cups since the turn of the century, and none since 2011.

That's a big blow, as finishing second or first would've made teams such as Costa Rica or Honduras the likelier opponents in such a quarter-final, which while still a tough game, is a significantly more palpable matchup than El Tri.

Indeed, all of that would mean nothing if Canada fails to make the quarter-finals, of which their odds are now longer of doing due to their group stage troubles, but that just shows the implications of their loss to Cuba, which could loom large.

In a short tournament format, every point matters, and because of that, that now leaves Canada with a taller mountain to climb to reach Indonesia, let alone Paris.

While Canada's dreams of Indonesia and Paris might feel distant now, they’re not totally impossible, either.

Part of the reason why that is? The play of several key performers, which have shown enough flashes to remind people that there are all sorts of individual talent in the team, with the collective being more of the question for Canada right now.

Just a look at the U.S. game, where Canada rode some strong individual performances to a draw, as a prime example of that, as well as their late burst to quell St. Kitts and Nevis - there's definitely talent there.

Matthew Catavolo has looked like a dangerous threat on the left for Canada, with the Valour FC midfielder doing a good job to drift into pockets in the final third, all while grabbing a well-taken goal in the process. Meanwhile, Lowell Wright has had his fair share of flashes, nabbing two well-taken goals, showing why he's turned heads at York United in recent years.

You add in the two-way threat that CF Montreal midfielder Rida Zouhir has been able to bring in midfield, with his passing and long shots doing well to trouble opponents, that's another threat. Alongside OGC Nice midfielder Justin Smith, who has quietly emerged as Canada's player of the tournament, that's been a commanding midfield duo, one that has been fun to watch.

Sprinkle in solid defensive performances from the likes of Kwasi Poku, Matteo Campagna and Keesean Ferdinand defensively, Ben Alexander in goal, and Kamron Habibullah, Tiago Coimbra and Jean-Aniel Assi in the attack, and it certainly hasn't been all doom-and-gloom for Canada.

So for Canada, the goal for head coach Biello has to be to figure out what his best XI is within that, especially as the bigger games start to come in. As expected, rotation was heavy in the group stages, as a congested schedule and risk of suspension led to a lot of changes, but that'll be different in the knockout stages.

Through that, Canada will hope that can also help them find the cohesiveness and chemistry needed to solve some of the things that have dogged them so far, preparing them for these big games.

And hey, for what it's worth, if the US game is to mean anything, it shows that Canada will be up for these games, so it's all about finding a plan that fits with that idea, learning from these three very interesting group stage games.