TORONTO – Before a (frozen) ball had been kicked in Edmonton, John Herdman made his team’s intentions clear.

“We’ve talked internally about becoming a new Canada,” Herdman said. “A new Canada not only qualifies for the World Cup, it tops the (qualifying) group. It tops Concacaf.”

The statement itself was typical of the “new Canada”; confident, ambitious, and unafraid to say so, certain they will back it up on the pitch.

When we talk about how Herdman and his players are changing this program, that’s what we normally focus on: the mentality. But while its power should not be underestimated, there is far more to this team than its courage.

What hasn’t been discussed in as much detail is the football itself. How does the “new Canada” actually play? With eight matches in the Octagonal under their belt, what kind of on-field hallmarks have been established?

A few trends emerge that could provide us with hints as to how Canada will chart a course through the three vital qualifiers to come over the next eight days.

Martino was so worried that he did something he had never previously done for an important game — he changed Mexico’s formation, adding an extra defender to the starting lineup.

Canada won but for the first time in the Octagonal, neither Davies nor Buchanan created a chance from open play or had a shot on target. Canada would be wise to expect other teams to focus on shackling them going forward.

Everyone knows what kind of threat Davies and Buchanan pose: they are lightning quick, direct, and can turn the momentum of a game in the blink of an eye. Those traits, as much as anything else, have defined Canada’s style of play through eight games.

Canada is not a team that is likely to pick you apart with long spells of possession. In fact, all eight of their goals scored from open play during the Octagonal have come from moves of five passes or fewer.

This contrasts in particular with the three teams Canada would now appear to be competing with for a place at the World Cup. Whereas Canada’s average number of passes in moves resulting in a goal is just 2.5, Panama (4.9) and the United States (4.8) nearly double that. Mexico’s average (4) is somewhat misleading, as they have scored a handful of goals from rebounds (which count as zero passes) after much longer passing moves, but still higher than Canada’s. 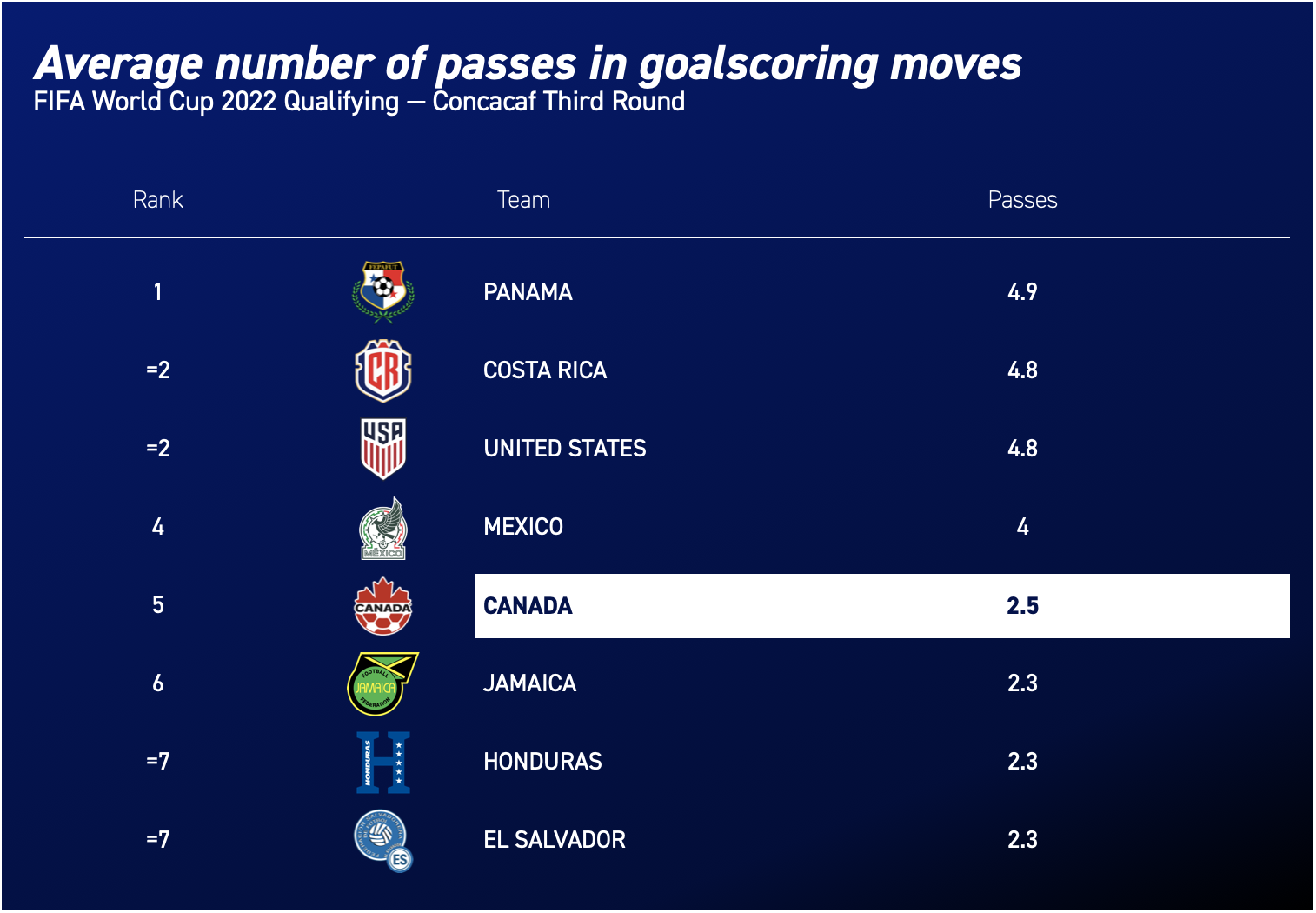 Canada’s forwards have been devastating in their ability to break at speed: think Jonathan David stealing in to set up Buchanan against El Salvador, Cyle Larin’s equalizer against the United States, and, of course, Davies’ moment of genius against Panama.

Herdman will want to improve his team’s ability to construct chances through longer possessions but with four of their six remaining qualifiers taking place on the road, an ability to hurt opponents on the counter bodes well.

The challenge: doing it without Davies for the next three. He has either scored or assisted half of those eight open-play goals, created more chances from open play than anyone else in the Octagonal, and is easily the continent’s best ball carrier.

With a degree and no professional playing background, there is no question that Herdman belongs to a new category of coaches making their mark at the top levels of the game.

The 46-year-old regularly mentions the number of advisors with PhDs that he leans on, and it follows that a meticulous planner with an academic background would put a heavy emphasis on an aspect of the game that many others neglect: set pieces.

Through a combination of clever routines, targeting of opposition goalkeepers’ weaknesses, and excellent delivery (from Stephen Eustaquio in particular), Canada has scored four goals from corners and indirect free-kicks in the Octagonal, more than every other team combined (3). 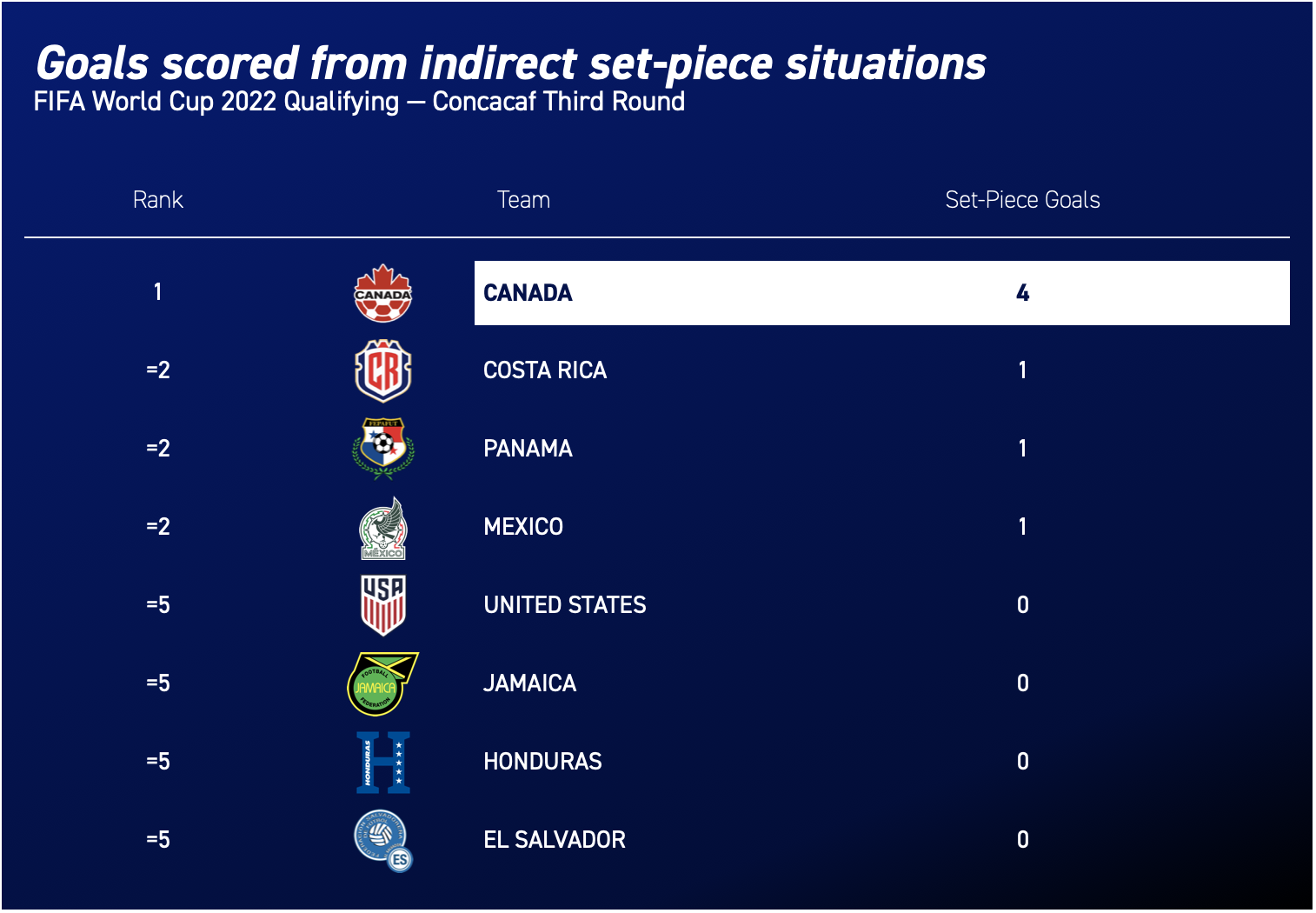 Herdman and his staff, namely goalkeeping coach Simon Eaddy, put the team through its paces from attacking and defensive set-piece situations in the final training session before each game and they are reaping the rewards.

Given that six of Canada’s eight games have been either draws or won by one goal, the significance of being able to add a goal every other game in this way speaks for itself.

Holding court with a group of reporters after a press conference back in 2018, Herdman was asked what his vision was for Canada’s style of play.

“What can we be best at in CONCACAF?” Herdman replied.

“We can’t be best at things we know Mexico are going to be better than us at. We’ll never be able to change that, not in eight years (leading to the 2026 World Cup). But we can be the best at very specific things and be very deliberate.”

In other words, you can’t expect to go to Estadio Azteca and have Mexico chasing shadows for 90 minutes.

But what you can be is very good at aspects of the game that can cause a team like Mexico problems — like those quick breaks and set-piece situations.

And what you can also do is turn Mexico’s strengths against them. With such a well-established identity, they can play wonderful, fluid soccer at their best. But that same identity can make them inflexible and predictable.

Canada cannot be accused of that. Since the first game of the Octagonal they have made at least three changes to their starting lineup for each match, flipping between multiple different formations. In three games they have had over 60% possession of the ball; in four others it has been at 43% or lower, dropping to 28% against the United States. Sometimes they press high; sometimes they back off and play on the break. And their approach can change not just from game to game but within a game and even a half.

The new Canada is chameleon-like, adjusting to opponent, venue, weather, and whatever else is thrown at them. And with six games to play, they’re on top of Concacaf.