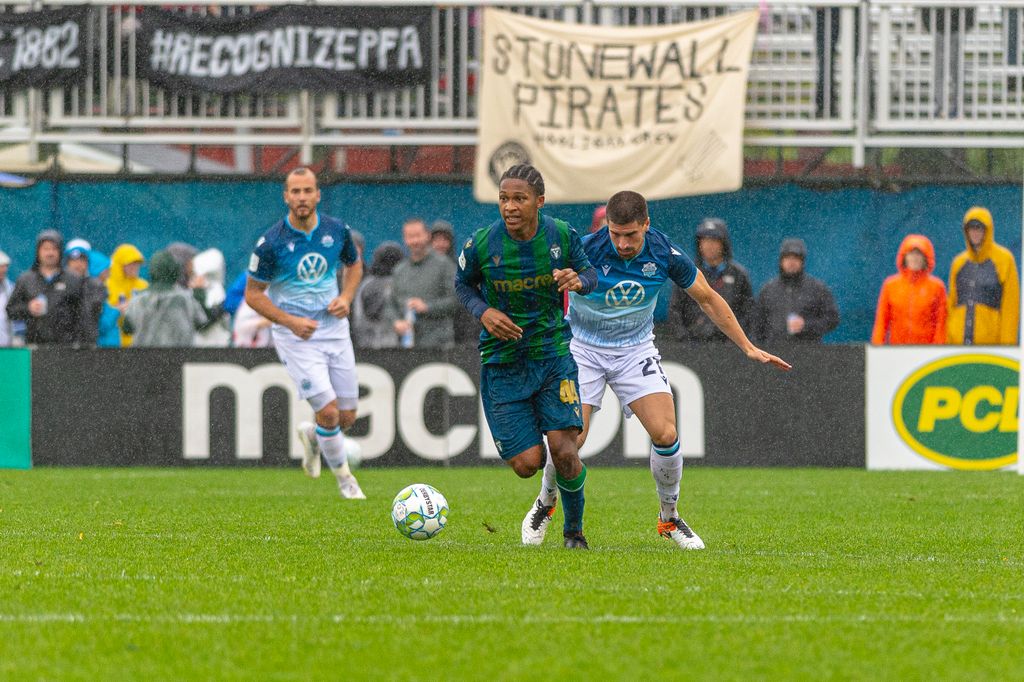 VANCOUVER – The Canadian Premier League is set to hit a big milestone this weekend, as it gets set to play its 300 official game as a league.

For a young league, that’s a huge achievement, especially in light of everything that has gone on these past few years, making it a moment to celebrate.

It feels like just yesterday that York United (then York 9) took the field against Forge FC, kickstarting this new journey, yet, over three years have passed since that day, with countless milestones to follow, the latest of which being this 'CanPL300' outing.

So in honour of that 300th game, which will occur when FC Edmonton and York United take the field on July 1st at Clarke Stadium, here’s a look back at some of the more memorable games in league history.

Within the 299 games to pick from, there were certainly some classics, so here are those that stand out the most among the lot.

It’s not often you see a team reduced to nine players. It’s even less rare that a team with nine players then goes out and scores a goal.

Yet, that’s what occurred in this September clash during the CPL’s inaugural campaign, as what was supposed to be a routine game between Cavalry and York 9 got feisty late on, leading to Cavalry losing José Escalante and Nathan Mavila to red cards around the 75th minute.

Despite that, however, Cavalry then went out and did the unthinkable, stunning the York crowd by scoring with just nine players on the pitch, as a solo Nico Pasquotti goal gave them the lead right in the 83rd minute.

From there, they looked poised to hang onto that lead, too, but then York pounced late on.

Right in the 96th minute, Wataru Murofushi got on the end of a tidy Stefan Lamanna ball, rescuing some pride for York, while capping off a pretty dramatic second half of action.

It might not have been a game filled with goals, per se, but the chaotic nature it finished in means that it is still not one to forget nearly three years on.

There’s nothing better than a late comeback, or as they’ve been coined, ‘remontadas’. To see a team on the verge of victory, throwing it all away at the end, it’s a sight like no other in soccer.

Last year, Edmonton and Valour combined for one of those games, as a non-descript match between two teams who’d eventually miss the playoffs ended up bringing all sorts of drama.

To begin, the hosts, Edmonton, came flying out of the gates, grabbing a 3-0 lead through Tobias Warschewski, Amer Đidić and Azriel Gonzalez, seemingly putting them well on their way toward victory by the 48th minute.

Except Valour didn’t quite get that memo, as they pushed hard to get back into the game, but as they reached the 77th minute, that goal remained elusive. And then everything blew wide open.

First, Moses Dyer breached Edmonton’s goal in the 78th minute, before finding the net again in the 81st minute, quickly narrowing the deficit. Then, right in the 88th minute, Daryl Fordyce tied things up, against his former club, to boot, setting up a frenetic finish.

But despite both teams’ best attempts to deliver a winner, they were left to split the spoils, in a game that also featured several shots off the woodwork, making it a thrilling outing for the neutrals.

It might not have been a result that Edmonton would have been happy with, but it was one that was hard to keep your eyes off of late on, making it a game to remember.

It seems like every time that Forge and Cavalry meet, the fireworks come out. From their thrilling Canadian Championship encounter in 2019, to the first-ever CPL final in 2019, and even as recently as their fun 2-2 draw earlier in 2022, they never fail to deliver on drama.

But of their games, there might have arguably been none better than their meeting at the 2020 Island Games, where they were given the honour of playing each other to kick off that bubble as defending finalists.

There, they wasted no time in picking up where they left off pre-pandemic, as Dominick Zator first opened the scoring for Cavalry in the 11th minute, before Anthony Novak replied with an acrobatic 26th-minute equalizer, marking a frenetic first half.

Then, the ending would get even better, as Forge managed to grab the lead in the 71st minute through Kyle Bekker, seemingly giving them the last laugh in this finals rematch.

Except, as is typical when these two teams meet, Cavalry ensured that wouldn’t be the case, as they managed to win a late controversial penalty, one that Nathan Mavila calmly put away in the 94th minute to cap off a fun encounter between these two rivals.

Goals, drama, all part of a game played at a breakneck pace - it was a typical Cavalry versus Forge game, with this one being one of the most memorable of them all.

But as the CPL gets set for its 300th game, there are probably many who still aren’t over the league’s 299th game, which came this week as Pacific hosted Cavalry in a top-of-the-table clash.

Typically always a good battle between these teams (just look at their semi-final in last year’s playoffs), it was expected that they could reproduce some similar magic as they got set for their second meeting of this season.

Yet, even those expectations would be blown out of the water, as we then got a game for the ages (and the inspiration for this piece), as both teams most certainly brought the drama at Starlight Stadium for this one.

It all started harmlessly, as Djenairo Daniels opened the scoring inside five minutes, but then the game broke open in the 29th minute, as Pacific’s Manny Aparicio and Cavalry’s David Norman Jr. were both sent off in a scrap, reducing both sides to 10 players apiece.

There, with the space afforded to them, things broke wide-open, leading Pacific to make it 2-0 through Gianni Dos Santos in the 43rd minute.

Despite that, Cavalry did well to push back, however, as a late first-half goal from Daan Klomp first gave them life in the third minute of added time, before a José Escalante free kick tied things up in the 50th minute.

Then, against all odds, they then made it 3-2 in the 56th minute, as Aribim Pepple put away his sixth goal of the season, extending his scoring streak to a league-record five games, all while tying Alejandro Diaz atop the golden boot race.

His lead would be short-lived, however, as Diaz then scored in the 76th minute to both tie the game up and regain his lead atop the golden boot charts, capping off a game to remember on the Island.

Goals, red cards, lead changes - this one had it all, making it an instant CPL classic, setting the table nicely for ‘CPL300’.

As the rain poured down on Halifax on September 6th, 2021, most folks weren’t expecting much as they headed to Wanderers Ground to see the Wanderers host York in a Labour Day clash. A win for the home team would be nice, of course, as would be some goals, but other than that, it was a typical midseason clash.

Yet, despite that, they’d be treated to a game dubbed the ‘Labour Day Classic’, as a muddy Wanderers Ground then bore witness to arguably the most memorable game in league history.

It all started out quiet in the game, as a Diyaeddine Abzi free-kick goal got things started for York in the 40th minute, before Julian Ulbricht made it 2-0 for York in the 52nd with a tidy finish, seemingly giving York the easy win.

But then, in a stunning twist, the Wanderers managed to win back-to-back penalties in the 84th and 87th minutes, both of which João Morelli calmly slotted home, all of a sudden bringing his team back into the game late on.

Except their lead would be very short-lived, as the muddy conditions then forced a giveaway out of Halifax’s Christian Oxner in the 90th minute, one that York’s Alvaro Rivero did well to pounce on in midfield, before chipping the Wanderers keeper from 40 yards to give his team a stunning winner.

Or so they thought. In yet another stunning twist, Halifax’s Mamadi Camara then somehow missed a wide-open header off a corner, but in a shocking turn of fate, the ball then rebounded off of Abzi and just narrowly over the line, allowing his team to rescue the points.

Through that, it put a bow on a game that nearly had it all, brought together by a dramatic ending that saw four goals in eight minutes, ensuring that the muddy ‘Labour Day Classic’ would live on for years to come.

Right to the final whistle, this game made sure to deliver on the drama, making it one that stands above the rest ahead of ‘CPL300’.