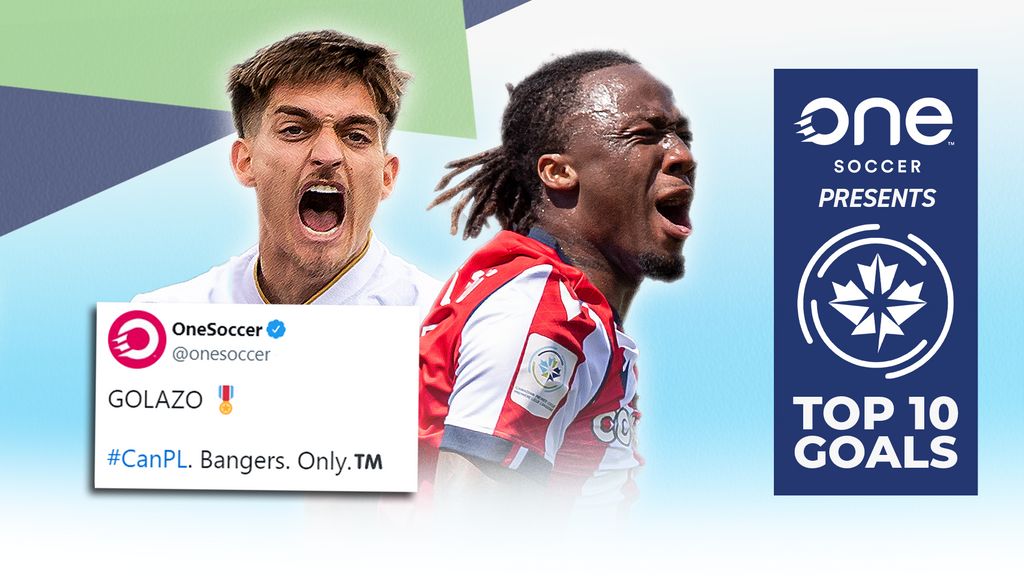 Does the Canadian Premier League feature the most number of jaw-dropping goals per game on average?

It's certainly felt that way this season, as each weekend seemingly produces another golazo of spectacular variety, a strange phenomenon we've dubbed "CanPL. Bangers. Only™" on social media.

From acrobatic bicycle kicks to mazy dribbles, long-range rocket strikes and Olimpicos, the CPL has seen it this year, and then some.

It's going to be a tough task to pick the CPL Goal of the Year – even this Top 10 list requires sorting through well over two-dozen top-calibre goals.

But we've done the hard work for you, and barring anything miraculous from this last weekend of CPL action, here's what we've got. Enjoy!

Let's kick things off with a notable effort from a player who has shown flare for the spectacular in spades during his time in the CPL – Valour FC midfielder Sean Rea.

On loan from CF Montreal, the 20-year-old's finish on this goal is equal parts excellent in form and in function. Despite being locked level at the 87th minute in this early-season home clash vs. York United – a game that the visitors were mostly dominating – Rea still managed to create something out of nothing at the perfect time for Valour.

Unleashing a mazy wave of dribbles, which included a roulette and a chop, Rea then shifts the ball onto his right foot before unloading a rocket of a shot into the side netting, a goal that stood up as a remarkable winner and the Goal of the Month for May. Not too shabby.

Continuing down the list, we've got Gianni Dos Santos of Pacific FC, who offers an audacious screamer from an early-season game against Valour (who, it must be said, feature on this list prominantly, for better or worse).

Despite having a maze of bodies in front of him and finding himself well outside the box and leaning onto his back foot, Dos Santos still decided to go for a shot at goal ... and he caught ALL of it/

Fuelled by all sorts of power from seemingly out of nowhere, the ball flew into the top corner to halve Valour's 2-0 lead, a scoreline Pacific would later turn into a 2-2 draw.

Considering that Valour missed the CPL playoffs to Pacific by just a few points, these dropped points sting just a little more now.

Gianni dos Santos with a SCREAMER!!

Another incredible goal to add to the long list of them this season in the CPL!🔥@PacificFCCPL cut the lead in half as they are now down 2-1 against @ValourFootball
#CanPL | 🔴 https://t.co/7JFAUhgjL6 pic.twitter.com/WWcVKuBCDp

Each and every bicycle kick goal is special in its own right, and Walter Ponce's acrobatics in June against Cavalry is no exception.

Zoning in off of a second ball, the Chilean striker did well to adjust his body and launch his high-flying attempt, slotting the ball in off the post from close range for a spectacular finish to halve Cavalry's lead at the time.

In the end, it'd be a forgotten goal as Valour would go on to lose that game 4-2 ... but it was a creative and well-executed goal all the same, undoubtedly of top-quality.

Across his two seasons in the CPL, Ollie Bassett has proven that he is always keen to impress, as this Olimpico goal shows.

With his team down a goal and looking to keep their position atop the table comfortable, Bassett stepped up to a corner and decided to go for it, wrapping the ball towards the back post with venom and curl.

There, it'd catch Valour's Jonathan Sirois by surprise, curling into the side netting and capping off a viral marker that caught fire online, making it one of the best of this CPL campaign.

It's not often that a player is able to drift through a bunch of defenders and unleash a rocket with their weaker foot, yet that's exactly what Brett Levis did for Valour in a match against Ottawa early in the season (in which Valour famously beat Ottawa 6-1).

It was the sixth of those goals which proved most memorable, as Levis decided to rip out a sequence of dribbles, including one that saw an Ottawa defender tumble to the floor, before unleashing his cannon of a right shot off of the post and in.

In terms of spectacular? It's hard to top this sequence of events, making this goal one that Levis likely won't soon forget.

SIX for @ValourFootball vs. @AtletiOttawa and it's ANOTHER #CanPL BEAUTY 💥

Seriously, what is with this league!? BANGERS. ONLY.

Somehow the second time that Valour features on this list with an acrobatic kick, this attempt from Matteo de Brienne is a peach of a goal, too.

Starting with a great floated ball by Sean Rea, de Brienne quickly realized that he'd need something extra to get on the end of it, with his head not being enough. There, he decided to throw out his leg, and stick it up as high as possible, before slashing the ball into the low corner with a rapid scissor motion.

From there, he rips out an even better celebration, getting out the backflip to show that his acrobatics were no fluke and marking a goal that combined athleticism, creativity and timing to a tee for the August Goal of the Month winner.

The lone player to feature on this list twice, Rea further proved his ability to create something out of nothing against Pacific in May when he scored an audacious long-ranger from over 40 yards out.

Even more impressive than the finish is how it started; a defensive regain from Rea, who then managed to fend off the speedy Gianni Dos Santos for twenty or so yards, before deciding to have a go from distance and chip the 'keeper.

In the end, Dos Santos and Pacific would get the last laugh, as Dos Santos would later score goal no. 9 on this list to help his team get the draw – but there's no doubting the quality of this goal from Rea.

THIS IS THE GOAL OF THE SEASON FROM SEAN REA!!

As a striker, it's important to be comfortable with your back to goal: Just ask Woobens Pacius.

Not only does the Forge phenom score this ridiculous goal, but does so while facing away from the net, adding to the ridiculousness of this effort that tied the game for Forge against, you guessed it... Valour.

After spying a bouncing ball, Pacius does well to track it, pivot his hips, and then wrap his supposedly-weaker left foot around the ball for a volley, lacing the ball into the side netting with power and precision on a first-time attempt.

In a position where most strikers would take an extra touch to shoot or pass, he had the creativity to go for the heroics, and he was rewarded for it, sparking a comeback that eventually saw Forge win 3-1.

Speaking of the creativity of a striker with his back to goal, here's our runner up courtesy of FC Edmonton's Tobias Warschewski.

Coming all the way back on the opening day of the season, the German forward pulled a rabbit out of his hat (pun very much intended) for the Eddies, scoring a goal that will put up one heck of a fight for goal of the year.

With his team trailing in the final minute of the game, Wesley Timoteo managed to find Warschewski with a cross slightly behind his striker mark. Fear not, however, as despite the awkward positioning, Warschewski decided to take a touch, line up a bicycle kick, and make full connection with it, slamming the ball into the top corner from the penalty spot.

In a game that would rescue a point for a rag-tag Edmonton projected to struggle all season, Warschewski quickly dispelled the notion that his team would be pushovers, setting the tone for a resilient season in Alberta.

GOAL OF THE SEASON ALREADY!!🐇

While Warschewski's bicycle kick was the hands-down leader of this race for months, you did wonder if there'd be a goal that could eventually top it.

Turns out, that goal would come in the last few weeks of the season, as Ottawa's Ballou Tabla scored a stunning acrobatic goal on the road against Cavalry, a goal that got the whole world talking.

Off of what seemed like a poor cross from Miguel Acosta landing just slightly outside of the box, the former FC Barcelona B and CF Montreal man decided to get creative with an attempt. Instead of trying to bring the ball down and make a pass or a shot, Tabla decided to reach out towards the cross with a scissored attempt, launching both feet off the ground as he connected with the half-bicycle on his side.

Despite being 20 yards away from goal, he managed to get the ball up and over Marco Carducci, slotting it into the roof of the net for an ab-so-lute GOLAZO.

This effort caught the attention of FIFA itself, too. This isn't just the CPL's clear goal of the season, but FIFA floated it as a genuine option to make the shortlist of the Puskas Award – the global award recognizing the best goal of the year from anywhere, period – which would be remarkable for Tabla and the CPL as a whole, making it the one to remember from 2022.

Hello soccer world. This is @CPLsoccer (not #MLS)

In this league, we have a saying#CANPL. BANGERS. ONLY.

Here's the latest, by Ballou Tabla of @AtletiOttawa