PREVIEW: 3 things to watch for the CanWNT ahead of pair of Australia friendlies

Just over six weeks since they last saw the field together, the CanWNT are back in action this weekend, as they kick off the first match of a two-game set against Australia late on Friday (or early on Saturday depending on where you are).

Their first camp since booking their spot at the 2023 World Cup earlier this summer, this is a chance for them to officially begin preparations for that tournament, as they kick off their journey towards the big dance next year.

Held in Australia and New Zealand next summer, Canada is expected to be among the favourites to win it all in 2023, sitting as defending Olympic gold medallists, making them a team to watch in that tournament.

Because of that, it’s only fitting that their first preparation camp is happening in Australia, where they’ll get to play co-hosts, Australia, while also getting a taste of what the environment could be like next year.

Therefore, while this camp is as much about Canada growing as a team, continuing to develop partnerships and building their tactical identity, this is also a chance to preview what the environment might look like next year, while getting two good matchups against a tier one team.

It doesn’t get much better than that for Canada, which shows why this camp is so key for them, making it one to keep an eye on as their journey to 2023 kicks off in earnest.

Given that this camp’s main goal is World Cup preparation, coming against a very solid opponent, there’s no doubt that Canada would have wanted the best squad possible available to face 12th-ranked Australia.

But while that much is obvious in theory, it has unfortunately not materialized in practice, as Canada has been hit hard by absences heading into this camp.

As a result, they head into this camp missing five potential starters from their best eleven, including their entire backline from the CONCACAF Championships, with Deanne Rose, Vanessa Gilles, Kadeisha Buchanan, Jayde Riviere and Allysha Chapman all out with injuries, and Ashley Lawrence out for personal reasons.

"With six players out from the recent WCQ, this camp will now provide a brilliant opportunity for many players to gain valuable experience as we officially start our World Cup journey." pic.twitter.com/g4MnWMLQWz

For a Canadian team that relies heavily on its strong defensive play, that’s a huge blow, as they must now face a dangerous Australian side while missing a good chunk of the group that didn’t allow a single open-play goal at the CONCACAF Championships, with the lone goal that they conceded at that tournament coming from the penalty spot against the US.

The good news, however? This provides a great chance for some new faces to step up and audition for Canada, especially at the back, because while the back four of Riviere, Gilles, Buchanan and Lawrence seemed set in stone for next summer, as Priestman has shown in the past, she’s always willing to give someone a shot, should they step up.

Much like Gilles did over the course of 2021 to surprisingly become a starter in Canada’s Olympic run, it’s not out of the realm of possibility for someone like Shelina Zadrosky to regain her starting spot, or for a Gabrielle Carle, Jade Rose, Bianca St.Georges, Sura Yekka or Marie Levasseur to claw their way in.

Along with the never-ending competition up front, as Canada looks to find a way to score goals more consistently, something that the likes of Nichelle Prince, Jordyn Huitema, Cloe Lacasse and Clarissa Larisey will look to prove that they can do, there will be no shortage of competition for places there, either.

You add in the big push that Julia Grosso has made to become a regular midfield starter for Canada, both through her play at the CONCACAF Championships as well as for Juventus, and there isn’t a spot in the field where competition isn’t fierce, really.

Therefore, for Canada, while they’ll certainly be missing some of those faces as they get set for these games, one door closing means that another one opens, and in this case, that could allow for some new faces to shine in these games, at both ends of the pitch.

Yet, while Canada will look for a few individuals to step up and shine in the absences of those key regulars, look for them to step up as a team, too, as they continue to evolve their tactical profile.

After having won the Olympics off of the back of a strong defence-first identity, one in which they looked to be dominant at the back and opportunistic in the final third, they’ve been on a quest to become more balanced as a team, especially in how they transition the ball up the field.

And as seen at the CONCACAF Championships, while they showed flashes of growth as a whole, a lot of work still needs to be done, especially in terms of how they play out of the back, how they get going in transition and their patterns in the final third, which you have to imagine become areas of focus in this camp.

Especially given the evolution of a lot of the top teams in the world recently, who are seemingly becoming more fluid and tactically adaptable, it means that Canada can no longer be so defence-heavy as they once were, making it imperative that they find this growth sooner rather than later.

Because of that, look for them to try out some new looks at this camp.

For example, it could be wise for Canada to start building out of the back in a back three, instead of a back four, allowing them to push their wing backs up the field while spreading the field with the three, making them more resistant to the high presses that have become popular globally.

-Canada has to either switch to a back 3, or start using one in possession if they're to build out of the back. Now, it's too easy to pin the FBs back and cut off the middle. Either they do the former and go Gilles-Buchanan-Zadorsky, or do the latter and have Quinn drop into a 3

Otherwise, having a strong ball-playing midfield trio could be another way for Canada to become stronger in transition, especially when they break lines when playing out of the back, while opening space for Canada’s speed on the flanks, allowing them to progress through the middle of the pitch much faster than they used to.

You add in some tweaks in the final third, where Canada has shown flashes, but hasn’t done a good enough job in A) creating chances consistently and B) finishing the chances that they’ve created, and that could result in a new-look Canada, one that can be as deadly going forward as it is defending.

Which, as they get set for the World Cup, would be key, because if not, it’ll be hard to imagine them repeating their Olympic glory next summer, especially given the rise of some teams that we’ve seen globally, who have done so off the back of some well-rounded, fluid tactical adaptations. 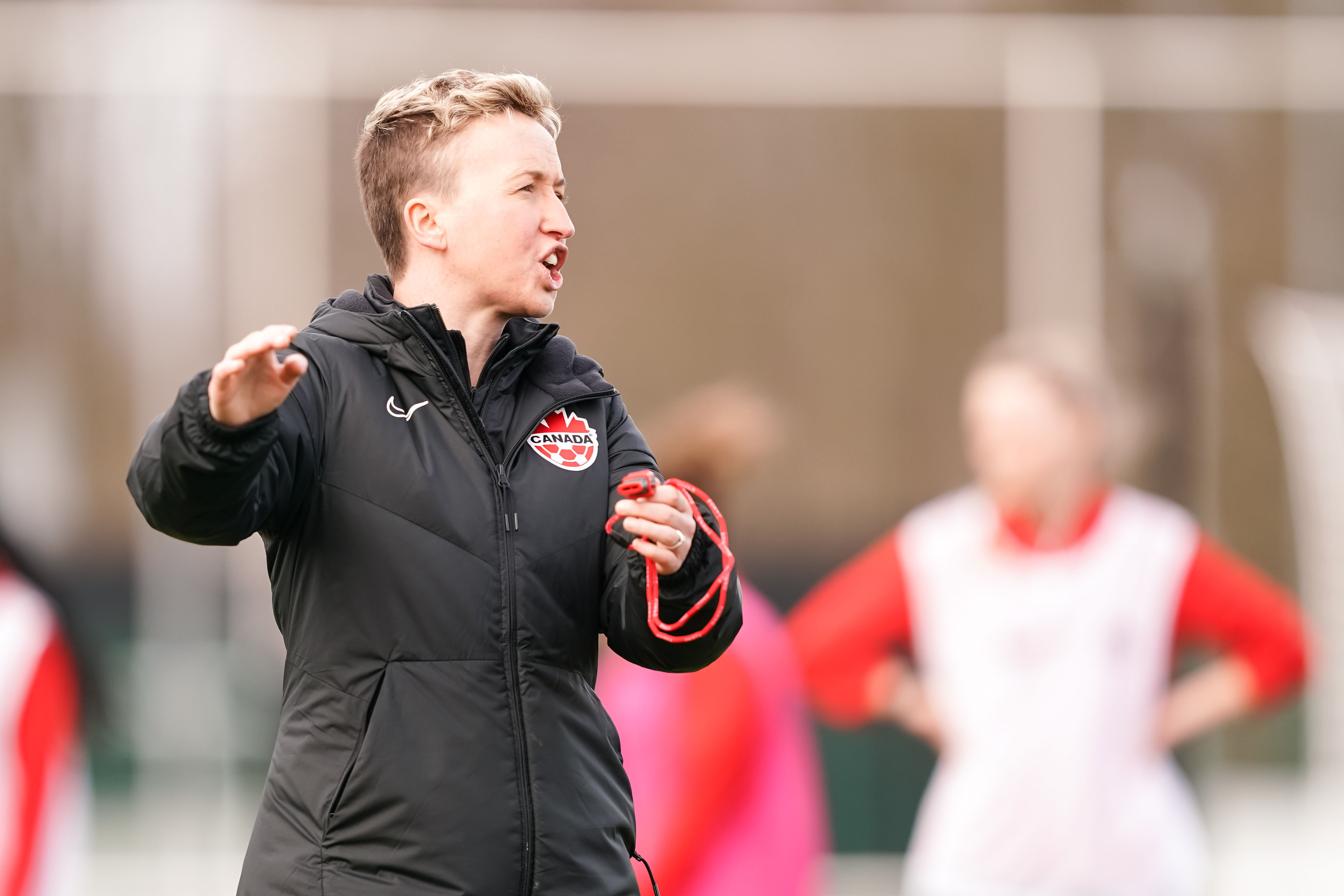 And speaking of teams to keep an eye out for next summer, Australia is certainly a good dark horse, especially given their positions as hosts, which shows why these games will be a good test for Canada.

Led by the dangerous Samantha Kerr, who has 59 goals in 110 caps internationally to go along with 191 professional tallies, and supported by veterans such as Clare Polkinghorne, Emily van Egmond, Alanna Kennedy, Hayley Raso and Steph Catley, Australia has a group filled with both experience and talent.

It's Sam Kerr, can she find a finish??
"Oh my word, its wonderful"#Samkerrforballondor#EmmaHayesEra#CFCW pic.twitter.com/2TMGieXjnu

Add in the growth of youngsters such as Mary Fowler and Ellie Carpenter, who already play for top clubs in Manchester City and Olympic Lyon despite being both under 23 years of age, and there’s certainly a good group of talent for Australia to lean on ahead of next year.

So although Raso and Carpenter will both miss out on this camp due to injury, this will certainly still be a stiff test for Canada, especially given the absences that they have to deal with.

Given that over the last year, Australia has tied the US 1-1, beaten Brazil 3-1, while also handily beating New Zealand twice, when they’re on their game, they can be tough to beat, especially given their knack at keeping things tight defensively while being opportunistic offensively.

Because of that, this will be a perfect test for Canada. Not only will they be facing a tier-one team, which is always nice, but they’re facing one against whom they’ll be forced to have to break down in games, which is something that Canada is looking to do a better job of in games.

Therefore, as Canada looks to find that aforementioned tactical growth, this will be a perfect way for them to test out some of those ideas, as Australia is the exact sort of profile that Canada will need to become adept at cracking, allowing them to add that important versatility to their game going forward.