AlexGangueRuzic
Canada NT
It's the match we've all been waiting for: Canada vs. USA in the Concacaf W Championship final, with all to play for and a spot in the 2024 Olympics on the line. Here's what you need to know ahead of our 10PM ET kick-off.

MONTERREY - After a long journey to get to this point, it’s the game that everyone’s been waiting for.

The CanWNT take on the USWNT in the CONCACAF W Championships final, all for a spot in the 2024 Olympics and a chance to lift silverware. It doesn’t get much better than that!

Having witnessed some classics between these two teams in these sorts of big games, they’ll get a chance to add another chapter to that stored history on Monday in Monterrey, when the pair of CONCACAF giants will meet in yet another final/game of high consequence.

Yet, this has been coming.

Both undefeated through four games to get to this point, having swept their respective groups before winning their semi-final, it feels like both sides have been slowly gearing up for this eventual meeting since they first set foot in Mexico.

Of course, they didn’t want to look past any of their other opponents, either, but at the end of the day, this game was always going to be on the players' minds, and Canada admitted as much on Thursday.

“Yeah, I think it is what we've predicted,” Canadian midfielder, Quinn told reporters on Thursday. “It's what we've seen in the last CONCACAF tournaments that we had, so yeah, we're really excited for the match.”

“It's gonna be a tough one for sure. It always is when we face them, but I think we can give them some problems, for sure.”

Jessie Fleming’s successful penalty kick secured Canada’s 1:0 win against the US in women’s soccer at #Tokyo2020

Canada 🇨🇦 is heading to our first-ever Olympic final. via @CBCOlympics pic.twitter.com/z4z8p5RkmX

And make no mistake; this is a big game for Canada, who will be eager to build off what they showed the last time they met the US.

Coming in the semi-finals of last year’s Olympics, Canada famously upset the US in a big 1-0 win, one that sent Canada to their first-ever final of a major tournament, where they’d eventually go on to win gold in penalties over Sweden.

Not only that, but that win snapped a winless drought of just over 20 years against their neigbhours, too, finally giving them a one-up on them in what had become a very one-sided rivalry.

So ahead of this rematch, Canada will want to repeat that feat once again. Having won this tournament twice before, those victories came through wins over Mexico in 1998 and 2010, meaning that Canada has never beat the US in a continental or major final.

Because of that, while beating the US is always sweet, making up for years and years of watching the US celebrate winning these games would be even sweeter, which would be an important bonus on top of being able to hoist a trophy and pocket an Olympic berth.

“We're super excited for the game, we want to test ourselves against the best, and the US are an incredible team,” Canadian head coach, Bev Priestman, said. “I know that they will definitely be coming into this game with Tokyo in the back of their mind, they’ll want to put that right, and we definitely don’t want to underestimate them.”

“They’re a top side, but I'm really excited to undergo that challenge again, and there's a lot on the line with the Olympics, so we want to make sure that we win that final.”

Rapinoe wants this one back 👀 @brfootball pic.twitter.com/8vhSkDgXcQ

Because of that, keep an eye on Canada, as for them, this game probably comes at a perfect time for them.

Not only have they been growing each game this tournament, finding a way to overcome each obstacle that comes their way, but they are facing a US side with all sorts of questions surrounding them right now, too.

Already reeling after last year’s Olympic upset, the US haven’t looked like themselves this tournament, despite what their perfect record might suggest.

For example, it took capitalizing on a few individual mistakes to beat down Costa Rica in the semi-final, a game in which the US would’ve typically tried to blow open the door themselves, and that wasn’t the first game in this tournament where that was the case for them.

Because of that, it feels like while Canada isn’t the favourites heading into this game, as the US has too much talent not to be given a fair shot, Canada has every reason to head into this game with the belief that they can finish the job that they’ve so far started here.

“Yeah, it's been a long tournament, and we're looking forward to the final,” Canadian defender Ashley Lawrence told OneSoccer. “It's going to be a good matchup against the US, we’ve played them so many times. But we've done well to get up to this point. We've shown our qualities as a team, a lot of goalscorers stepping up, and just the depth that we have, so it’s exciting, and we’re looking forward to it.” 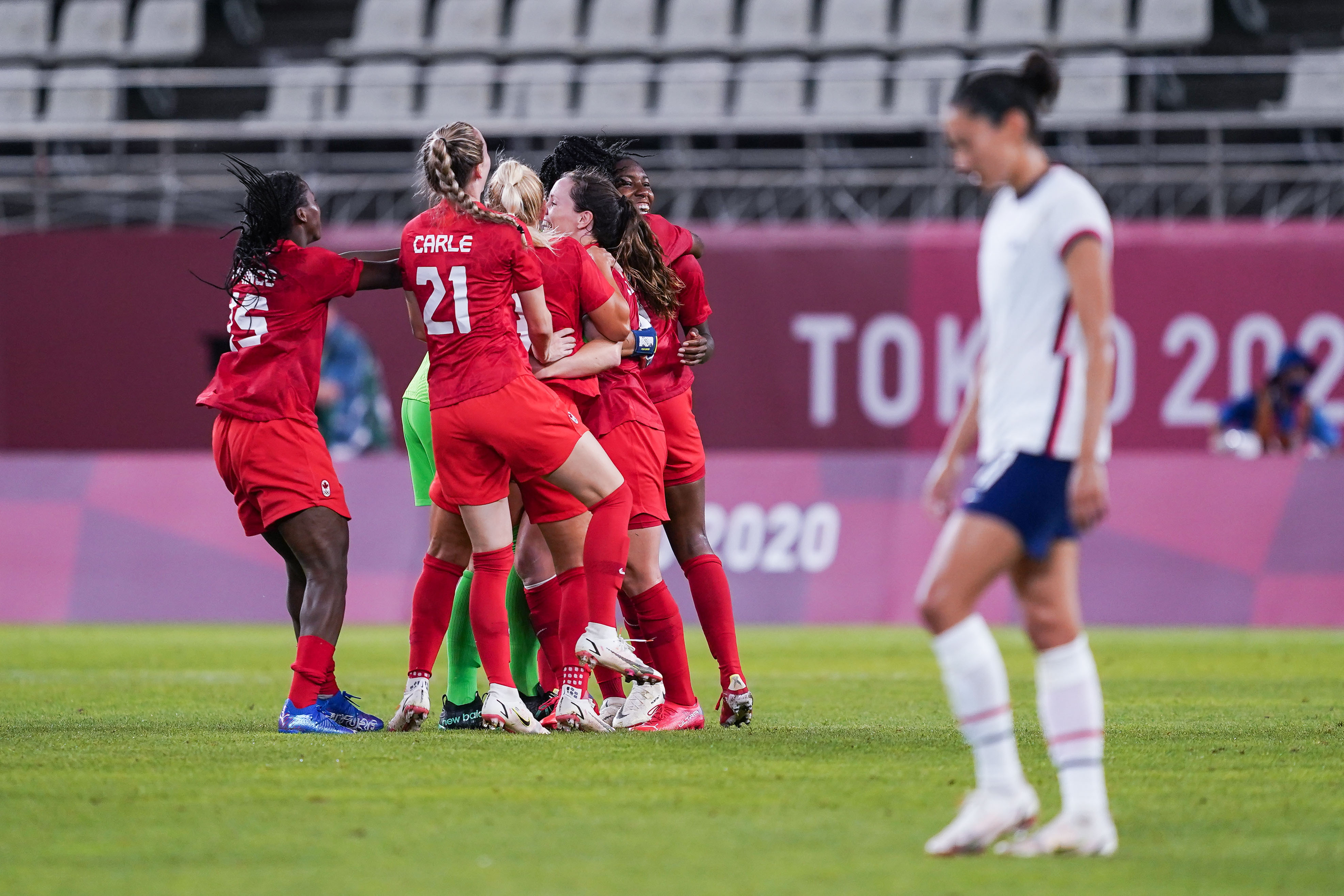 At the very least, it feels like if anything, a good game is going to be on the cards.

No matter the circumstances, these teams get the best out of each other, and although the US usually had the edge in this matchup, there is never a shortage of drama or entertainment in these games.

Especially with Canada’s recent surge and the US’s slump (if you can even call it that?), and what’s at stake, we could stand to see one of the best editions of this rivalry on Monday.

So although it’s going to be a stressful game for those involved, it’s a challenge that Canada is welcoming, with the message being quite simple - bring it on.

“Whenever you watch Canada vs the US, it’s always a good game, it's always tight,” Priestman said. “There are moments when it's exciting to watch as a fan.”

“And I think for both teams, to get that sort of game now, it's probably come at the perfect time.”