KRISTIAN JACK: Why Jozy Altidore was the people's champion of Toronto FC

Late in 2018 shortly after Toronto FC’s season had ended prematurely in disappointment, Sebastian Giovinco found himself in the bathroom at a stall standing next to team president Bill Manning.

Both Giovinco and fellow star striker Jozy Altidore had one year left to run on their current contracts and the forwards who had combined so well together on the pitch again found themselves bonding over a different game as they went about negotiating new deals with the club.

Toronto FC had decisions to make and wanted time. Giovinco, never shy to say what he felt, was perplexed at what was taking so long. Knowing Altidore was never too comfortable talking about himself, he decided to talk for him.

In the bathroom that day he glanced at Manning and stated, “You better re-sign Jozy!”

Giovinco loved playing in Toronto and one of the favourite things he enjoyed was playing with Altidore.

“For me it is a pleasure to play with Jozy, we complement each other well,” the former league MVP would often say.

A couple of months later, the Italian didn’t get a new deal and was sold to Al-Hilal of Saudi Arabia, just 15 days after star playmaker Victor Vazquez moved to play in Qatar.  By the end of February 2019, after losing two of their greatest ever attacking players, the club decided it couldn’t lose a third and ensured Giovinco provided one final assist to his friend, re-signing Altidore until the end of 2022.

Three February’s later, Altidore has now followed his former forward partner through the exit door, his time with club ending after seven seasons.

In Giovinco, the club said goodbye to unquestionably their greatest ever signing, failing to agree terms that would have seen him stay in Toronto.

He moved on - and although many fans didn’t want it, they could understand it from both sides.

In Altidore, the club has said goodbye to arguably their most important ever signing, before his contract expired after he has struggled to stay on the field in recent years. The new contract in 2019 was always supposed to be a reward for what he would accomplish next, but everyone understood that with the Altidore there was a caveat because of what he had already done for Toronto FC.

Altidore arrived in Toronto at a time when the club was at a precarious cross roads in its life. One year on from the ‘bloody big deal’ promotion and another miserable high-profile signing, in Jermain Defoe, ending in disappointment, the club that had faced so much adversity and so many defeats in its first eight seasons faced its biggest challenge of all – apathy.

The signing of Altidore should have been a bloody big deal... except at the time, it wasn’t. 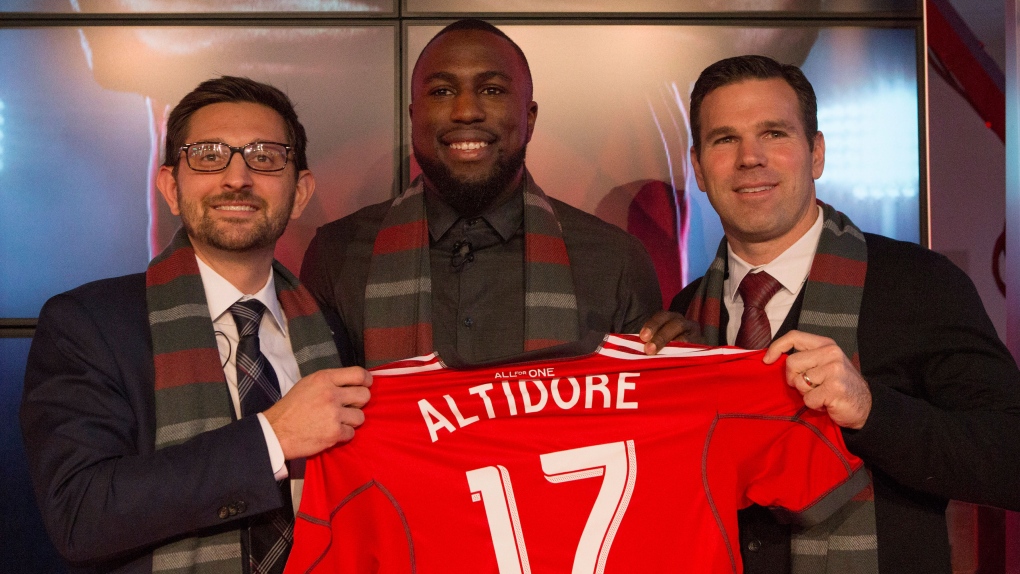 Loyal Toronto FC supporters had grown tired of failures on and off the field, season ticket prices had been rolled back to 2007 and general manager Tim Bezbatchenko’s reputation as an up-and-coming front office star was hanging by a thread when he and his ownership group signed a deal with Sunderland, then of the English Premier League, to swap Defoe for Altidore. Quite simply, this one had to work.

“I wanted to go to a place in the next few years where I had a big say on what goes on and where I have to play well for them to win,” Altidore said upon his unveiling in January 2015.

What a promise that turned out to be. Although his first season brought some improvement and the squad’s first trip to the playoffs (a 3-0 loss to Montreal in the knock out round) the club changed forever in 2016, a rebirth that began on the final Wednesday in October when Altidore inspired Toronto FC to its first ever playoff victory against Philadelphia Union.

The American scored the third and final goal in a 3-1 win to cap off a man-of-the-match performance that featured intensity with and without the ball, a drive and a burning desire that dragged Toronto FC over an enormous hurdle. It was a monumental individual performance.

He would go on to score in both legs of the demolition of New York City FC, both legs of the sensational series against Montreal Impact and was only denied scoring in all six playoff matches by the fingers of Stefan Frei in the final.  The following season on the way to winning the treble, he netted two of the most important goals the club will ever score.

In the second leg of the Eastern Conference final against Columbus Crew, after 150 minutes of scoreless action, he showed all the elements of his personality that made him such a fan favourite. First there was resilience. Altidore received treatment on a significant ankle injury before taking painkillers and telling his coaches that he may only have 10 to 15 more minutes to fight through it. Next came football intelligence. Altidore, who saw the game differently after learning from some of the smartest football minds like Robert Pires and Santi Cazorla in Spain, connected brilliantly in the buildup to the goal, reading the ball and appreciating space and timing at such a superior level that he was able to combine with special talents like Vazquez and Giovinco. This kind of intelligence earned him respect from his teammates quickly.

Finally, it was his composure and ability to slow the game down in front of goal, when everyone else sees it getting quicker, that elevated him to hero status with the fan base, curling the ball with the side of his foot at a perfect angle to beat Zack Steffen and send Toronto FC to the final.

In that final, he delivered again, connecting with Giovinco after a brilliant run to stay onside, before recognizing the recovery run by Joevin Jones early, to go to his left and finally beat Frei and score the most important goal in club history.

“I lost my mind a little bit in that celebration,” he joked afterwards.

Rumour was he didn’t find his mind again until days after the parade when he dropped the microphone to end a famous slurred speech with the words: “I’m TFC till I die.”

Turns out, as a player, that wasn’t the case, but in the hearts of his teammates, fans and most importantly in the now recovered mind of Altidore, that remains true.

Starting with their first playoff win against Philadelphia, Toronto FC played 23 monumental games in the 2016 and 2017 MLS playoffs, the 2017 and 2018 Canadian Championship finals and the 2018 Concacaf Champions League and in those matches Altidore (14) and Giovinco (13) remarkably combined to score 27 goals.

“Modern day Shaq and Kobe baby,” Altidore told me when he sat down with Giovinco for their final interview together in 2019.

During that sequence, they lost just four matches and not once in those four games (Montreal away in 2016, Red Bulls at home in 2017, Tigres UANL away in 2018 and Chivas Guadalajara at home in the 2018 final) did they lose on aggregate over two legs, advancing three times and losing on penalties in the other.

It was an unprecedented run for the league and the club that Altidore played an enormous part in. He scored three times in two Eastern Conference finals, he scored an MLS Cup winning goal, he scored a hat-trick in a Canadian Championship final and scored in the quarter finals, semi-finals and final against three different Mexican teams in the Champions League. 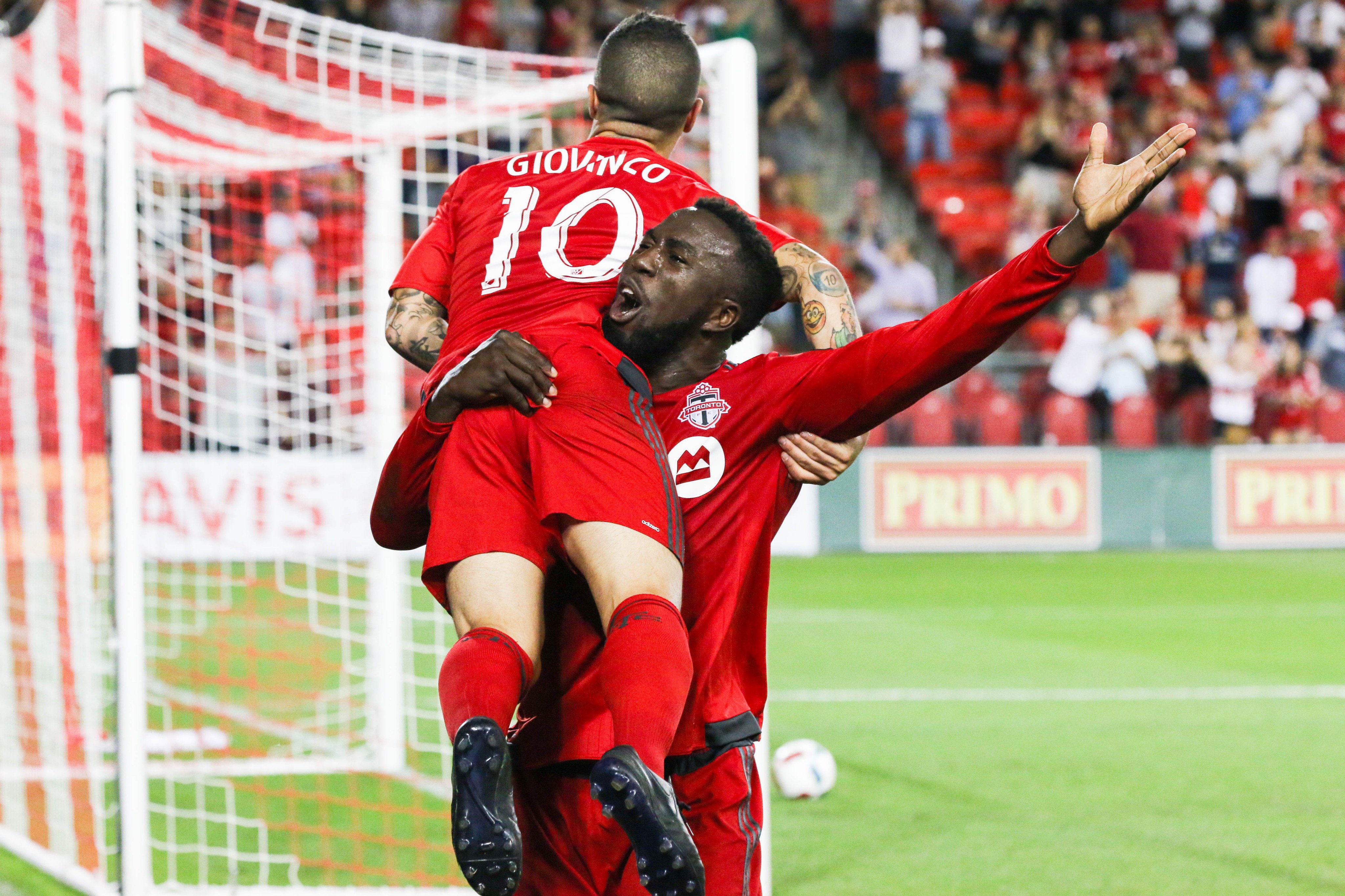 Like life, however, it was not always perfect. Altidore suffered with injuries and crucially had to come off during the game in Guadalajara before the penalty shootout (although it is important to note he played in 22 of those 23 games).

In the first three seasons he scored 45 goals in 86 MLS appearances during a time when the club played 114 games (75% of games played).

In his next three seasons, he scored 21 goals in 50 MLS appearances during a time when the club played 96 games (52% of games played).

Discipline cost him when he was sent off for clashing with Sacha Kljesten at half-time of a pivotal playoff match against New York Red Bulls in 2017 and he fought adversity during those playoffs after being targeted and blamed by a large section of US soccer fans for the country’s failure to qualify for the 2018 World Cup.

Through hardship, though, a bond grew tighter between Altidore, the city and its fans and when he became outspoken towards the club, fans would rally behind him knowing he wanted what was best for the organization. The American, much like his teammate Michael Bradley, at times felt far more at home in a place where he was more accepted and where forgiveness and compassion was showed to him because what he had done for the club.

At the start of 2019 when he thought his time with Toronto FC was coming to an end he reflected on his time, telling TSN: “Such amazing times. This is what we came here for. It was a huge challenge to give a club that didn’t have these types of nights, this is why we joined this club – to look back and look at these moments it justifies why we came here.”

Altidore remained proud of his own accomplishments, but in his final words gave a glimpse about what it all means to him and how he will remember it through the eyes of others.

“The best part of those moments is when you look into the crowd because you can see the euphoria. They didn’t have those moments in Toronto, the fact that we can help give them that for me it is already a huge pleasure.”

For Toronto FC and their fans, the feeling was mutual. It is no secret that he departs the club in a way few would have hoped and as both club and player now go in a different direction, scars will be opened and wounds will take time to heal.

In years to come, we'll likely be welcoming Altidore back to BMO Field and telling future generations about the man that made Toronto FC a champion on the field and became a people’s champion in the stands.

After all, people never forget how you make them feel. Just ask Toronto FC fans.