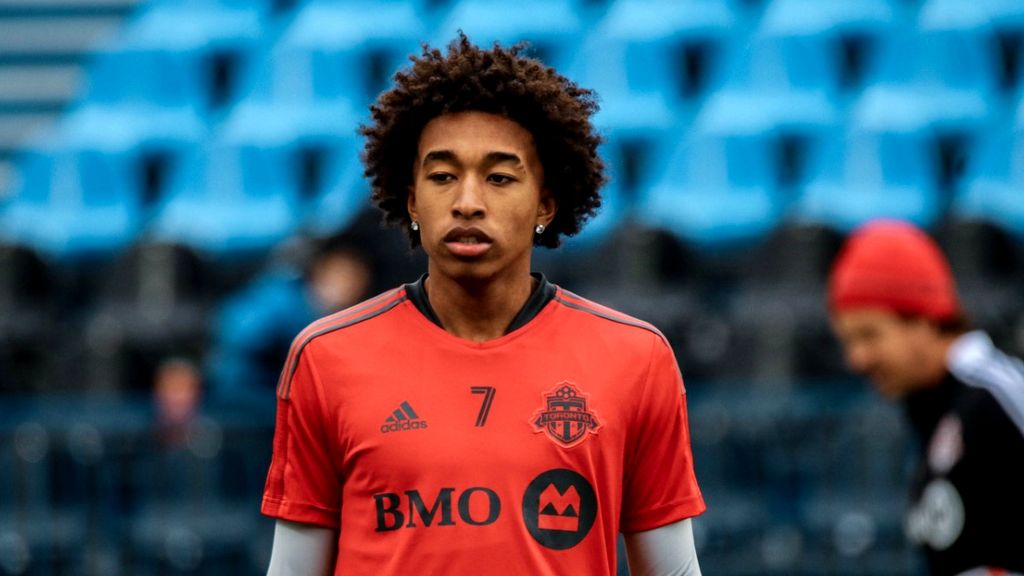 That’s important to remember. The Toronto FC full-back is 17 years old, and the second-youngest player to start a game in MLS so far this season.

But with Marshall-Rutty, it’s easy to become overwhelmed by the hype. At varying points over the past couple of years he has been labelled the best prospect of his age group in the United States and Canada, tipped to emulate Alphonso Davies, and had a $20 million price tag put on his head.

Watching him in TFC’s 4-1 loss to the New York Red Bulls on Saturday, it was hard not to think it has all become too much.

The winger playing opposite Marshall-Rutty, Lewis Morgan, scored a first-half hat-trick to fire the Red Bulls to victory. In the second half, after dribbling into trouble near the edge of his own area and coughing up a chance on goal, Marshall-Rutty was substituted.

The teenager was certainly not the only player to struggle and several of his teammates share culpability for Morgan’s exploits. After the game, Bob Bradley made a point of telling Marshall-Rutty that nobody was going to be changing their mind on him based on one afternoon.

Nor should anyone be under the impression that converting the Brampton, Ont. native to right-back was going to be an entirely smooth, pain-free process. He started well on opening weekend against FC Dallas but ups and downs had to be expected.

Bit of a learning curve for Marshall-Rutty at right back. pic.twitter.com/cIHBKseMDv

But that is the point. It feels as if the excitement around Marshall-Rutty, which was already high, has accelerated since his offseason trials in England and Belgium in a way that the on-field performances of a young man learning his trade at the professional level are going to struggle to keep up with.

Marshall-Rutty is not Davies. They may share the conversion to full-back but they are not all that similar stylistically and their trajectory has been different. On Saturday, Marshall-Rutty was 17 years, 8 months, and 19 days old and played his 14th game in MLS. By the same age, Davies had played 55 league games for the Vancouver Whitecaps, was on his way to the All-Star Game — and soon after, Bayern Munich — and had won the Golden Boot at the Gold Cup the year before.

When a country produces a true superstar like Davies, there is inevitably a rush to find the next one — especially when a second, like Jonathan David, has appeared at roughly the same time.

The truth is we will be lucky if another Canadian player capable of touching either one of those two emerges within the next decade. They just do not come around very often.

But as the national team captivates supporters from coast to coast in its race to the World Cup, everybody wants a piece of the action. That has been felt at TFC, where the growing excitement around the sport leading up to the 2026 World Cup was cited as one of the motivating factors behind the decision to spend big on Lorenzo Insigne. And it has persistently appeared as if Marshall-Rutty has been anointed their own budding Canadian superstar.

TFC president Bill Manning himself has made the Davies comparison when talking about Marshall-Rutty’s upside. And when Marshall-Rutty signed a first-team contract, he was heralded by then-general manager Ali Curtis as having the “potential to be an incredible player”.

Does Jahkeele Marshall-Rutty have a higher ceiling than Tajon Buchanan? #CanMNT | #TFClive | #NERevs

None of this is to suggest that Marshall-Rutty is not an exciting prospect and a potential future Canada international. He is. Starting games in a league like MLS at his age and not looking out of place is an uncommon achievement in itself. There are glimpses of real class, particularly in his ability to process the game and combine with his teammates.

The assessment offered by Greg Vanney back in 2020 holds up. “Jahkeele is like an old man in a really young man’s body,” Vanney said. “He makes really mature, real simple and clear decisions for the team.”

There is plenty for an experienced developer of talent like Bradley to work with. Perhaps, by the end of the year, Marshall-Rutty will be influencing games on a consistent basis and a move to Europe will be in the works.

But if it isn’t, we are in danger of that feeling like a disappointment because of the incessant way in which he has been talked up. And that’s not fair on a gifted young Canadian who does not need to follow any path other than his own.