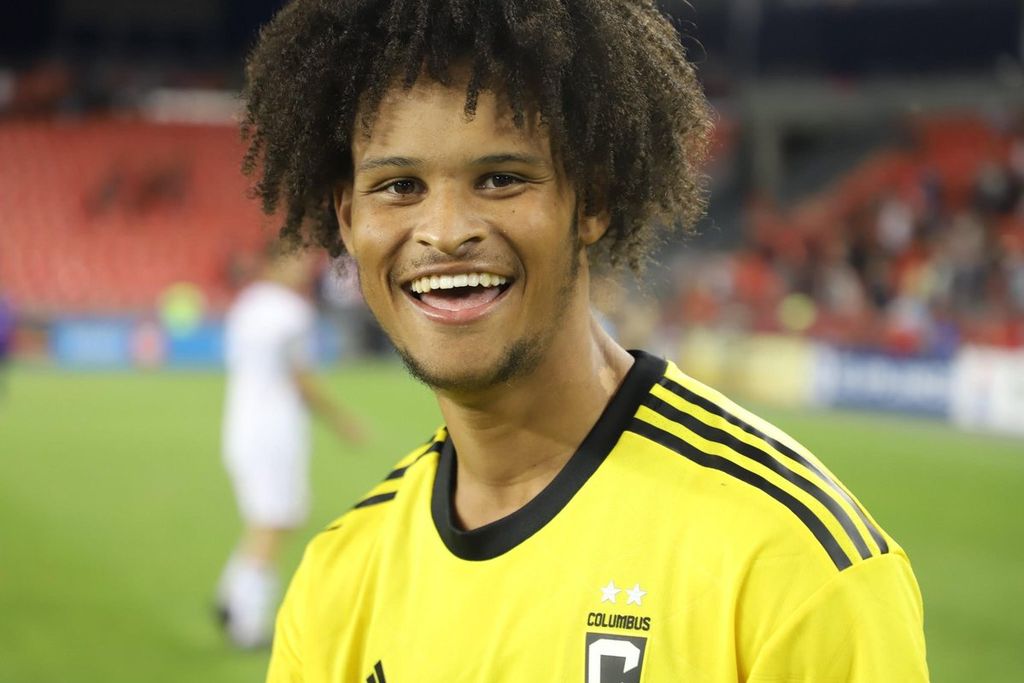 VANCOUVER – Just being on the pitch at BMO Field Wednesday was already a big accomplishment for Jacen Russell-Rowe.

But having left the Toronto FC academy to head to University of Maryland back in 2020, it’s not the way he envisioned making his return to Toronto, however, as this time he donned the yellow and black of the Columbus Crew.

Yet, it was the latest chapter in what has been quite the whirlwind of a season for Russell-Rowe, one that got even more spellbinding for the 19-year-old Canadian as he then went out and nabbed two assists against his old club in his first MLS start, just hours off of signing his homegrown contract with the club.

But it’s been that kind of season for Russell-Rowe, who has taken full advantage of every opportunity given to him this year. As a result, he’s quickly launched himself into the consciousness of a lot of Canadians recently, and for good reason, showing why he’s one of the next youngsters to keep an eye on in MLS right now.

“It felt amazing,” Russell-Rowe told reporters on Wednesday after this latest achievement. “Getting two assists, the win on the road, just being, playing at BMO Field, all of that together just makes it a very special night for me, (especially) on my first MLS start.”

Some 1st MLS start today for Jacen Russell-Rowe with #Crew96, against his former #TFCLive side. In 66’, he had:

For all of the hype around Russell-Rowe right now, however, it’s worth noting how remarkable this rise has been, leading to this latest moment.

Just at the beginning of 2022, Russell-Rowe was exploring his options, fresh off completing his second season of NCAA soccer with the University of Maryland.

Having picked up two goals and five assists in 18 games (12 starts), doing well to build off a freshman campaign where he nabbed two goals in eight games (six starts), the former Toronto FC academy product was eager for a new opportunity.

Because of that, he decided to give a bit of a new path a go - MLS Next Pro, MLS’s new reserve circuit, where he joined the Columbus Crew’s second team on an MLS Next Pro professional contract.

It was an unconventional route, no doubt, as he could’ve most definitely stuck in college and played League 1 Ontario, or even given the CPL a go, but instead, he took his talents to Ohio, certainly an intriguing decision for the Canadian.

Yet, by taking advantage of a new pathway, it’s paid off for him big time now. 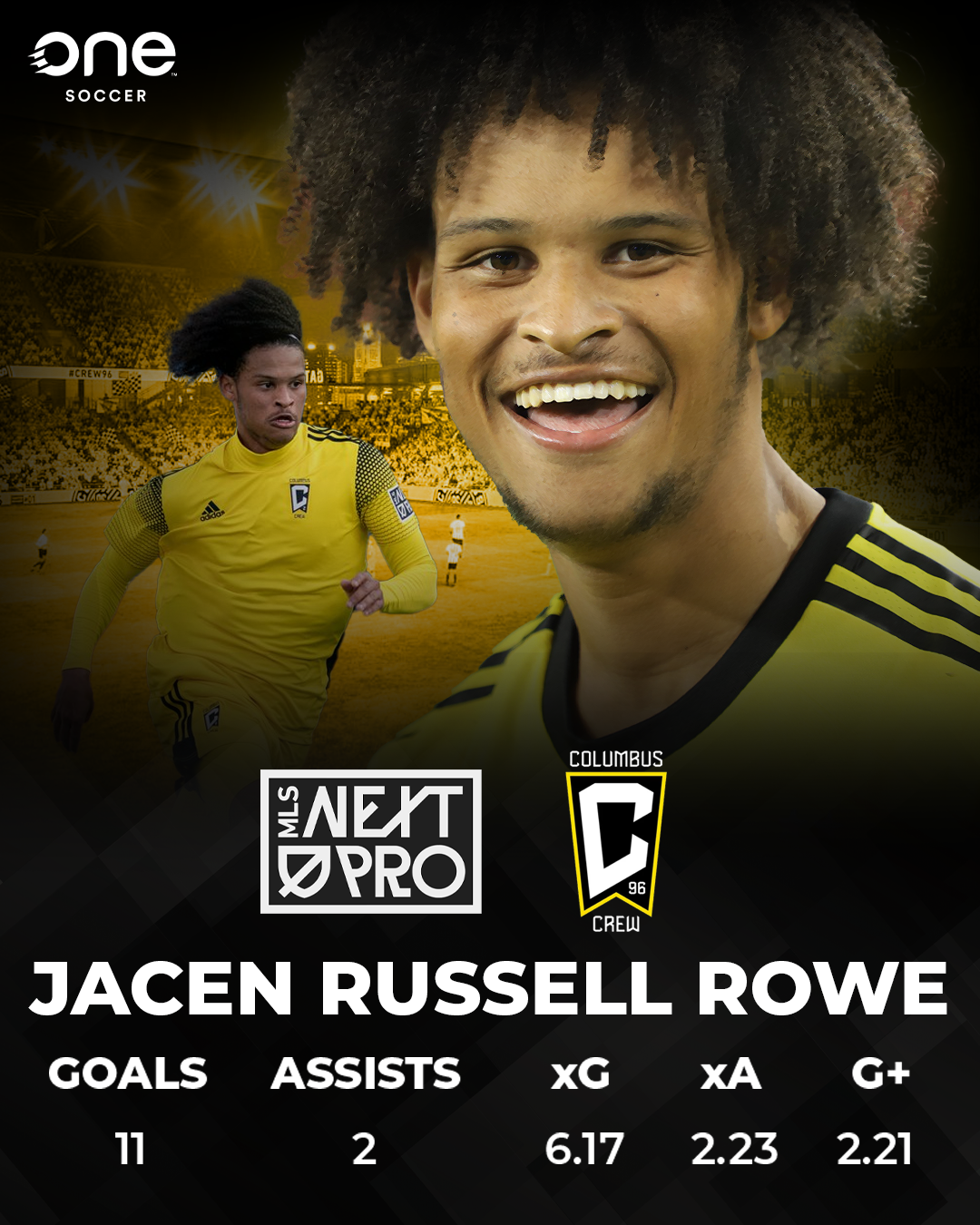 He didn’t end up winning a spot in Crew II’s starting XI right away, starting their first two games on the bench, but having impressed in those showings, he was given his first professional start on April 10th against Philadelphia Union II.

There, he wasted no time in leaving his impact on the day, nabbing the winning goal in a 1-0 victory for the Crew, and since then, he didn’t relinquish that spot, starting all of their games after that.

Not only that, but he made sure to leave a mark on those matches, too, going on a run that saw him score in nine consecutive games, vaulting him to 11 goals on the season, good for first in MLS Next Pro.

So in a sense, it felt like this homegrown deal was coming. Already having made his MLS debut just a few weeks prior on a short-term loan, he’s been on the Crew’s first-team radar for a while now.

Having taken full advantage of the chance to play in this new league, he’s taken it and ran with it, as evidenced by his impressive stats in the league so far.

It might not have been a conventional route to get to where he is now, but his gamble has paid off big time, as evidenced by his special night at BMO on Wednesday.

The most exciting part about Russell-Rowe's future is that, at just 19, his growth curve has just begun trending upward.

Already a promising youngster for a while now, which was clear when he bagged four goals in seven games for the CanMNT’s U17s back in 2019, including two in three games at the 2019 U17 World Cup, this is just a natural progression for him.

So even though it didn’t work out with his hometown team, Toronto, who just didn’t have an opportunity for him, that just gave him a chance to test his chops in a new environment, one that he’s so far done pretty well in.

Because of that, there’s no doubt that big things are on the way.

Primarily, at the MLS level, he’ll want to continue and break into the Crew’s first team on a regular basis, which despite his recent showing, isn’t going to be easy.

Having recently signed Watford forward Cucho Hernández to a club-record fee, one among the top 10 in MLS history, the Crew’s forward depth is going to be pretty crowded between Hernández, Russell-Rowe and Miguel Berry.

Of course, there is MLS Next Pro, if needed, but having already set that league ablaze, Russell-Rowe will want to stick around the first team, becoming a regular under Porter as the Crew look to climb back into the Eastern Conference playoff race, of which they’re just three points off of doing as of writing.

From there, that’ll continue to push him into the CanMNT discussion, of which you have to imagine is a goal of Russell-Rowe’s given what he showed with the U17s three years ago. It’ll be a tall task to get there ahead of the World Cup later this year, of course, but you have to imagine he’s someone who has a great shot at making the team long-term, with an outside shot for later this year.

It’s not going to be easy, especially with Canada having a crowded forward group, but given his unique attributes as a #9, which includes a good combo of speed, great runs, strong attacking awareness and a solid strike, he could be a profile worth exploring if he stays hot.

But either way, no matter what happens between now and November, there’s no doubt that he’s someone to keep an eye on for 2026, where he’d be just 24 years old, especially if this latest run is to mean anything. 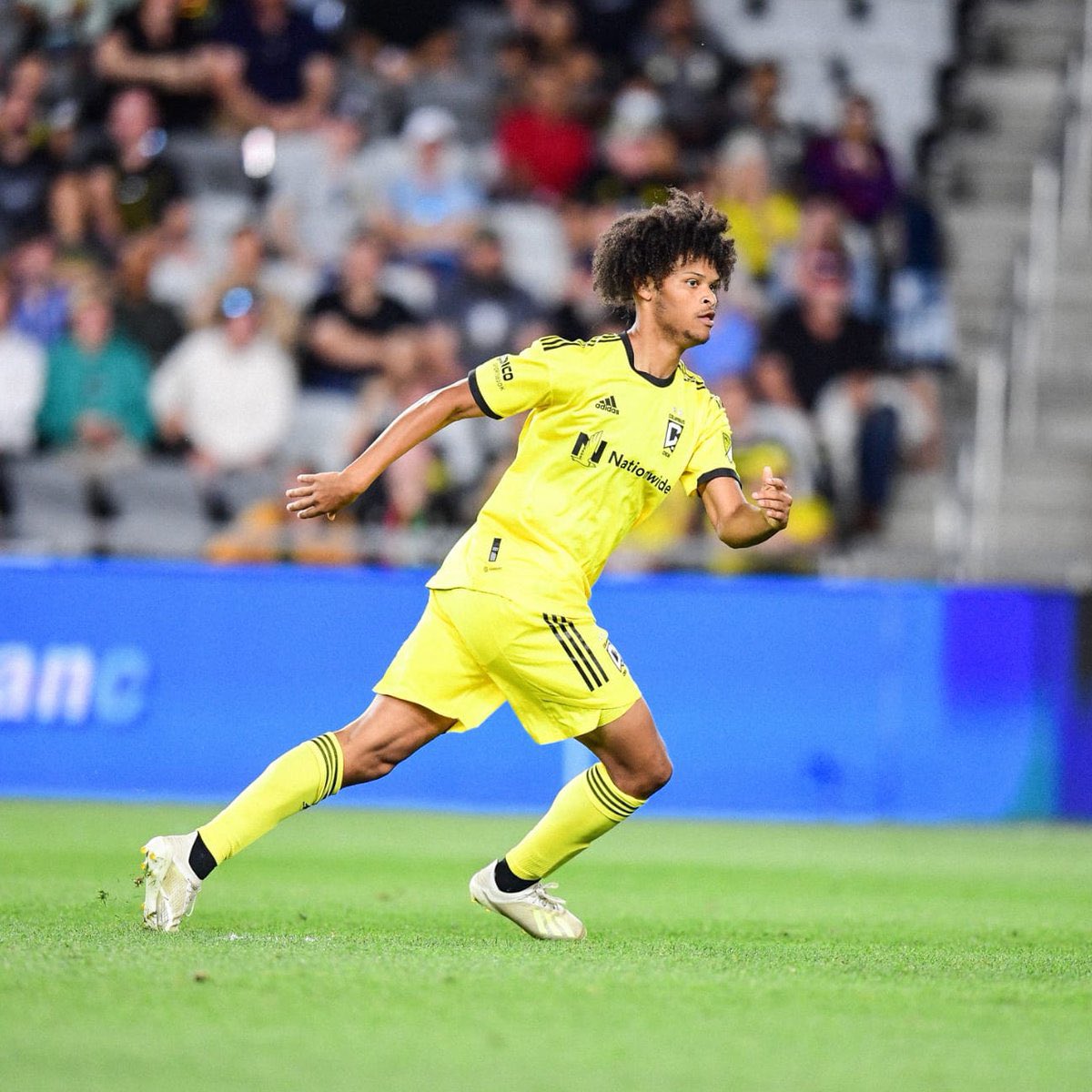 Could there be more on the way?

For all of the talk of Russell-Rowe’s play, there’s no doubt that he could be the first of many to emerge from MLS Next Pro, which is proving to be a solid option for Canadians to consider as a developmental option.

Heck, he’s not the only player on his team to have taken advantage of that, as fellow Canadian, Mo Farsi, has also been electric for the Crew II this season, sitting with a league-leading six assists despite playing at right back. As a result, the former Cavalry man has also earned some call-ups to the Crew first team, making some wonder if he could soon follow Russell-Rowe’s footsteps in signing a first-team deal.

You sprinkle in strong performances from the myriad of Canadians on Canadian sides, the Vancouver Whitecaps and Toronto FC, as well as some other individuals around the league such as Kwame Awuah and Mataeo Bunbury, and that only adds to that, too.

Plus, seeing that four MLS Next Pro players were in the CanMNT’s U20 squad for their latest CONCACAF Championships (with close to 10 being involved in the preparation process for the team), that shows the positive impact that the league is having on Canada’s overall depth.

So while it might not be the right platform for all young Canadians, as there are still merits to other pathways such as the Canadian Premier League, MLS, USL or Europe, it’s added another option, one that can certainly provide value in the right circumstances.

Just ask Russell-Rowe what it’s done for him so far this season.

“It's a great platform,” Russell-Rowe said of MLS Next Pro. “In that league, you're playing against a lot of academy guys who are trying to make that next step, some guys are just signed, and there are also some experienced players that would be reserve players on an MLS team. So it definitely gets you ready, gets you sharp (for the next level).”