'It hurt like hell': CanWNT lament loss to U.S. as focus shifts to finding next level 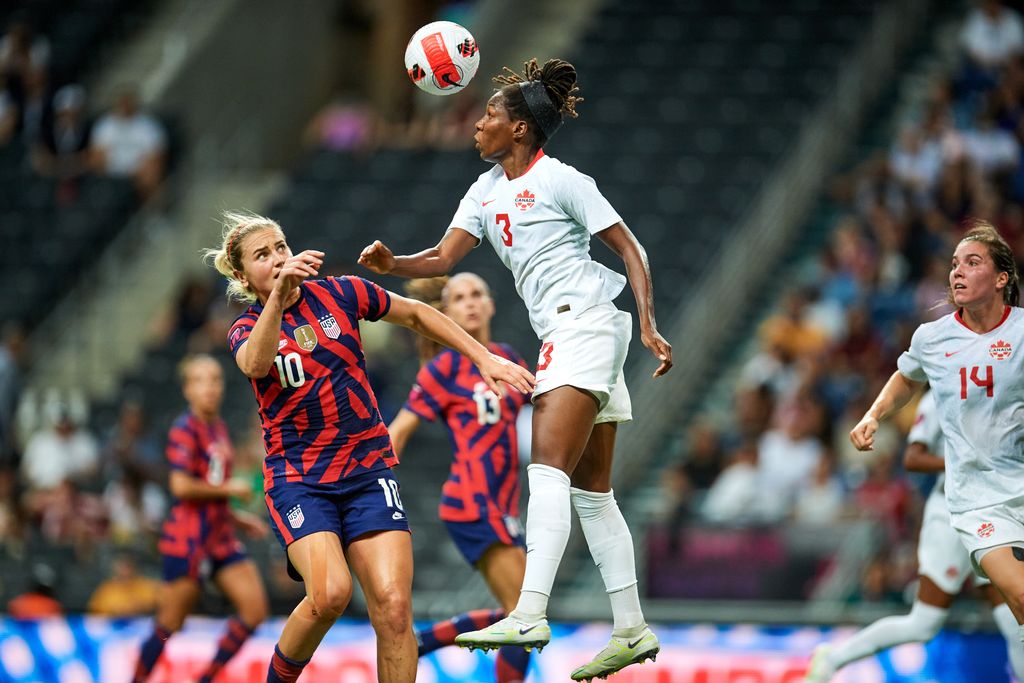 MONTERREY – No matter the occasion, losing to the United States always stings for Canadians.

Be it out on the playground, or in a competitive match, there is no context in which losing to the US is viewed as anything but painful for those who reside north of the 49th parallel.

But when that loss comes in a final, one that came during a tournament where the CanWNT looked poised to get one-up on the USWNT, it seems to leave even more of a mark than usual.

So in the aftermath of Canada’s 1-0 loss to the US in the final of the CONCACAF W Championships on Monday, one that denied them of a trophy and postponed their Olympic dreams, you can understand if the result left a mark on them.

“It hurt like hell for us,” Canadian head coach, Bev Priestman, succinctly put it after the game.

Especially in the context of their big 1-0 win over their neighbours in the semi-finals of last year's Olympics, one that snapped a 20-year winless drought against them, that almost added to the pain, knowing how close they were to repeating that feat once again on Monday.

Yet, that they felt that way in a loss against the #1 team in the world shows the fire that burns within this Canadian team, as they never want to leave the pitch unsatisfied in any game, let alone in one against the US, whose global dominance has cast a shadow that Canada is eager to get out of.

The US were quick to downplay their rivalry with their neighbours post-game, with head coach Vlatko Andonovski saying that this win felt like any other, while captain Becky Sauerbrunn added that there was a healthy respect between the two sides, but make no mistake, while that respect is also most certainly there on Canada’s side, that doesn’t mean that they have a desire to get an edge on their long-time rivals, one that burns quite deep.

“I think this rivalry has always been intense and close, and it means a lot to both teams.” Vanessa Gilles told OneSoccer after the game. “I remember growing up and watching the US versus Canada, whether that was at a home game, or on TV, and just being so motivated to want to go out there and play for Canada and win for Canada against the US.”

“I think it means everything, it’s a border battle, and a lot of us play against and play with these US players, so it’s also about pride for ourselves and for our nation, and to show everybody that while the US is a powerhouse, we can be there one day, and we’ve proved that by winning the Olympics, so now, moving forward, we just need to consistently be able to prove it again and again.”

"The group threw everything at it, right until the very end. We'll have to take motivation from this loss as we get ready for the World Cup." #CANWNT #WeCAN pic.twitter.com/BnTpgBU8AQ

The good news, however? While that shadow is most definitely still there, unfortunately, (and to be fair, given the US’s status as four-time World Cup and Olympic champions, that shadow is cast over most of the world), Canada is now slowly starting to put up a way better fight against their neighbours than they ever did before.

Long a one-sided duel, Canada has done an excellent job of putting a strong foot forward in their most recent meetings against the US, with the finest of margins deciding these games.

In fact, that’s shown by the fact that neither team has scored an open play goal in the last 180 minutes of action between them, with two penalties being the difference in each of those games, reflecting that increased parity.

“Yeah, it's definitely a healthy rivalry,” Canada’s Janine Beckie told OneSoccer. ”We felt that having beaten them last year, we knew that they were probably hungry to win today, but I think if you look at this game, you will have seen a much more level game between us and the US than you would have in the last 10 or so years.”

But while this loss will sting for Canada, they’ll have little time to lick their wounds, as their focus now immediately shifts to the 2023 World Cup, held in Australia and New Zealand next summer.

Having never finished better than 4th place at that tournament, having last made the semi-finals in 2003, Canada is eager to make a deep run next year, erasing those years of misfortune. And as defending Olympic champions, that feels like a more than fair expectation for them to have, one that they’ll look to meet this time next year.

With a handful of camps between now and then, they’ll have to waste no time in ensuring that they’re at their best for that tournament, so that when a game like this comes up again, they’ll be on the right side of the ledger when the final whistle blows.

First up on that journey? A pair of clashes against World Cup co-hosts and top 15 side,  Australia, in Australia, providing a perfect taste of what life will look like for them next summer.

Because of that, while they’ll stew on this result for a while more, with those games coming up rather quickly here, they’ll have little time to dwindle on this result.

“Our next camp is in Australia, which we're already looking forward to. Obviously, we want to build on what this game is going to teach us. But it's not the be-all, end-all, we’ll have more Olympic qualifiers after the World Cup, so not all is lost. Obviously, it sucks, but we have to take what we can from the game and move on quickly.”

“Yeah, we've got the September window against Australia, who are an incredible team,” Priestman added. “I think this moment will be a turning point for players, we'll push harder, we'll fight harder, and we'll keep on until then.”

Sometimes, you need to be knocked down to come back stronger, and while this hurts given the context of the opponent and what was at stake, everything is still on the table for Canada, even if the mountain is a bit steeper now than they might’ve liked it to be.

At the same time, Canada is eager to embrace the climb, allowing them to push to where they want to be, which is to the top of that World Cup mountain.

For that, the push starts now, and Canada is more than ready to get started with that stage of their growth.

“But at the same time, there are so many good things to take away and build on, and we're looking forward to the next opportunity to be together and keep refining those skills ahead of the World Cup.”

“I think it's okay to have waves, as long as you come back up, so I’m looking forward to the climb with this group.”