In case you haven't noticed, Ashley Lawrence is killing it (as usual) for Canada 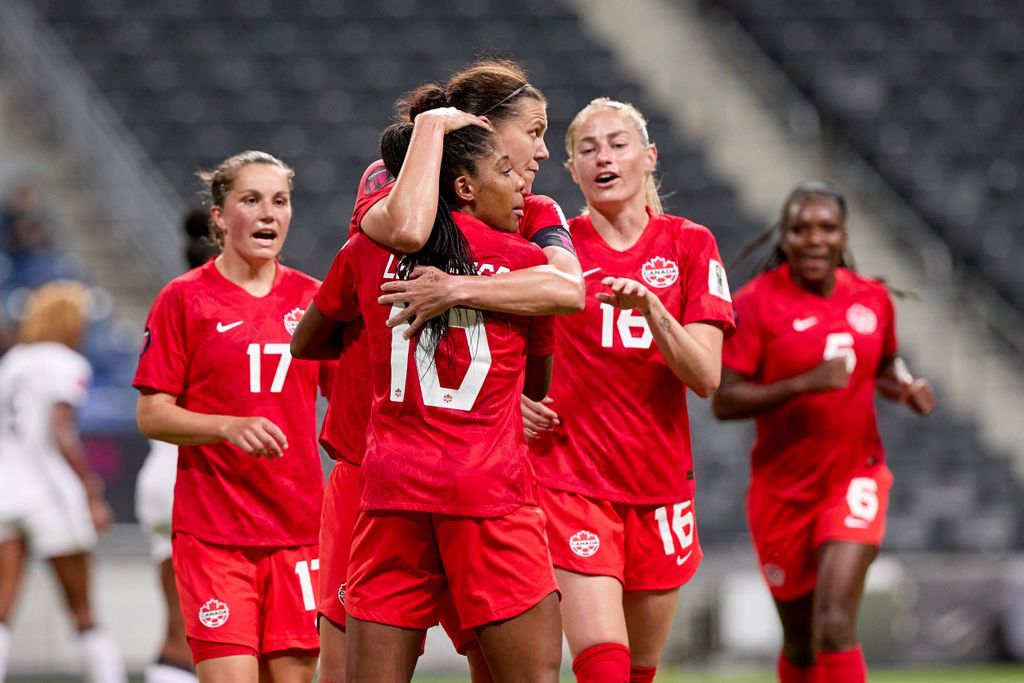 MONTERREY – How much longer can world football's "top" pundits pretend?

Left in the bottom half of ESPN FC's Top 50 Women's Footballers ranking; left out of every Ballon d'OR or FIFA The Best nomination list, and each World XI selection; despite a myriad of domestic titles to her name as a natural starter at Paris Saint-Germain, she remains unheralded for her efforts.

And yet, who else can do what Ashley Lawrence does for Canada, as consistently and cleanly as the 27-year-old does with each and every passing match?

As Canada head coach Bev Priestman puts it, Lawrence's influence can be felt in so many ways – from her pinpoint crosses, to her strong defensive ability, and her driving runs to overwhelm the opposition.

"I think she's one of the best full-backs in the world, if not the best," Priestman told OneSoccer back in April. "Working with her, and seeing her live at training, she's unbelievable, and doesn't get the recognition that she deserves.

"She's one of the most humble players that you'll ever meet as well; she doesn't go shouting about who she is."

JESSIE FLEMING opens the scoring once again for Canada, stunning Jamaica and getting a header on a ball delivered by Ashley Lawrence#CWC | 🔴 https://t.co/7JFAUhxUCE pic.twitter.com/MNpRPNbOqR

Perhaps we should, instead.

There's a reason why Lawrence is seen as underrated in a lot of circles. Despite being a rock on a strong Paris Saint-Germain team over nearly 100 appearances, Lawrence's star doesn't shine as brightly as it should.

She remains a quiet leader, dishing up assists and letting her teammates celebrate the spoils. A gold medal weighs heavily around her neck; few of her club-level peers can say the same.

Despite it all, Lawrence remains unbothered. She continues to fulfill her role on the team, and her teammates appreciate what she brings to the table. That's all that matters.

"I'm a defender first, so that's my priority, and we've shown that as a backline we're really, really solid, so we try to limit threats against us – that's our bread and butter.

"But then I try to see how I can incorporate being that second threat in the attack, and with this team, they just allow me to be myself. If I go forward, I know that if I lose the ball, I have a player who has my back, and that's the biggest thing – we're really willing to work for each other."

CHRISTINE SINCLAIR goal one hundred and NINETY 🙌#CanWNT go up 1-0 over Trinidad and Tobago in the 1st half of their Concacaf W Championship opener#CWC | 🔴 https://t.co/7JFAUhgjL6 pic.twitter.com/wPAXV6QfYn

On top of what she brings on the pitch, Lawrence has become quite comfortable in becoming a key leader for Canada, too – a role she embraces.

"I don't want to just be a threat; I want to provide leadership, and have a leadership role on the team," Lawrence offered. "I feel really comfortable, really stable on the team, and I just want to continue to be that example for other players."

Having recently crested the 200-appearance mark for club and country, and with a trophy case filled with an Olympic gold and bronze medal alongside a French title, two French Cups and a Champions League runners-up medal, Lawrence has been a player that a lot of young Canadians rightly look up to.

Fiercely competitive, Lawrence turns down no opportunity to test herself against the best, something that has been more than clear with her performances with PSG and Canada. 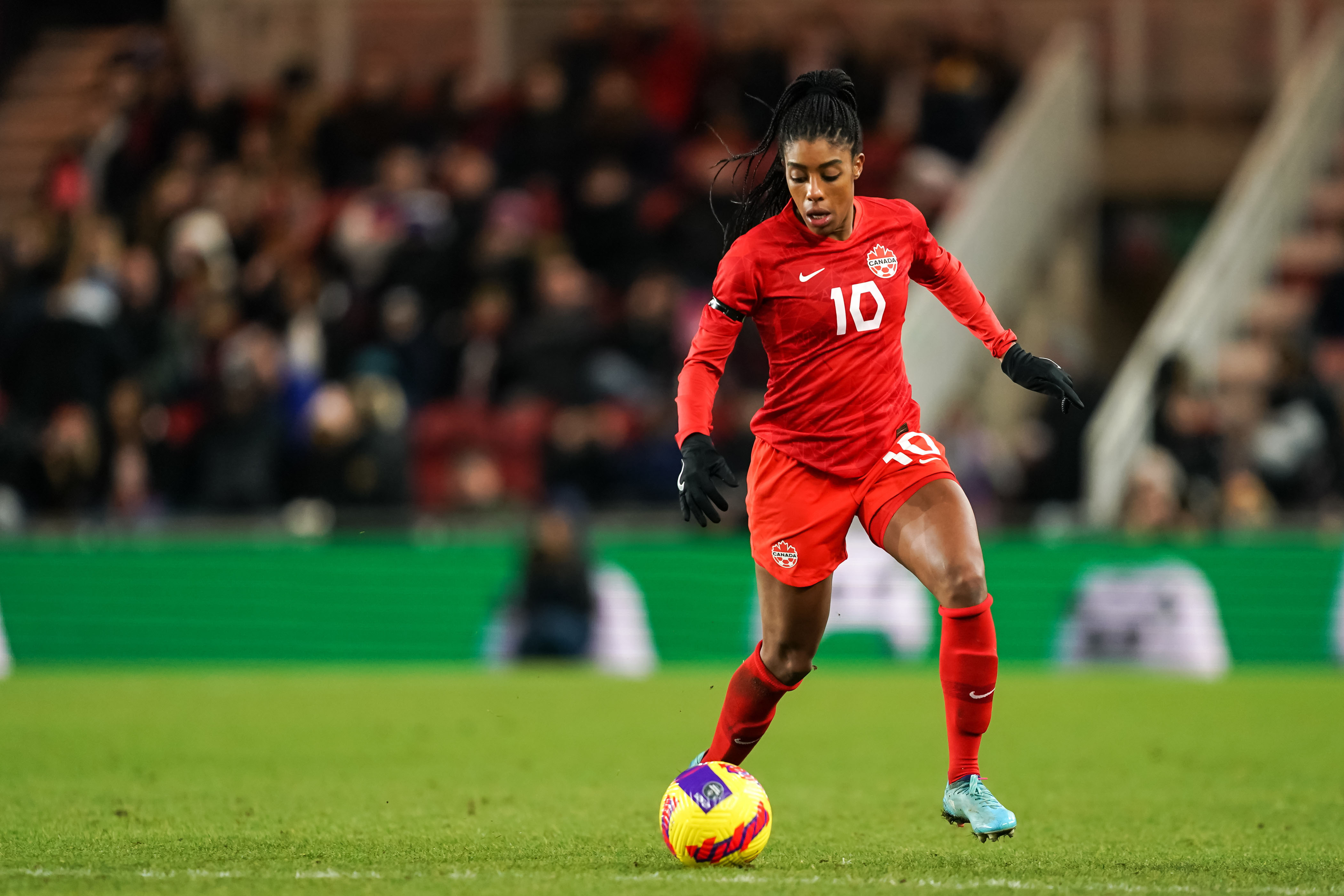 "Honestly, it's been ideal," Lawrence said of her time in Europe so far. "First signing in Paris, it was a challenge, but it was something that I wanted and something that I knew I needed for my development. And I've really grown a lot as a player and as a person, just being in Europe. Every day, even in training, it's challenging going up against some of the best international players in the world, and then playing in competitions like the Champions League.

"That has always been a dream of mine. Just having those challenges in front of me, those top players, it's really made me the player that I am today, so I hope to bring those learnings to Canada and vice-versa.

"But ultimately, it's really been my mentality where I've grown the most."

Ashley Lawrence is by far the most successful Canadian player overseas and is legitimately one of the best fullbacks in the world. I honestly don’t understand why she isn’t celebrated more. She should be the face of the #canwnt/#canxnt

At just 27, Lawrence still has a lot of gas left in her tank, doubly so when considering the scope of her competitive nature.

Having already competed at two Olympics and two World Cups, she is hungry to add many more big moments to her personal tally, both with the 2023 World Cup and 2024 Olympics.

So even if she still hasn't received the sort of recognition that she deserves, you can be sure that Lawrence is going to keep her head down and work towards her dreams, unrelenting in the pursuit of more.

And soon, many more footballers will come to know what Priestman has already taken to heart.

"For Ashley, the world is her oyster; she can only get better," Priestman said. "We can't not have her in the team. She's critical. You saw it at the Arnold Clark Cup, she can play back-to-back-to-back 90s, she's a technical world-class crosser, there are a whole host of things to Ashley’s game, really.

"If I was a club coach, she'd be one of the first players I'd take, for sure."