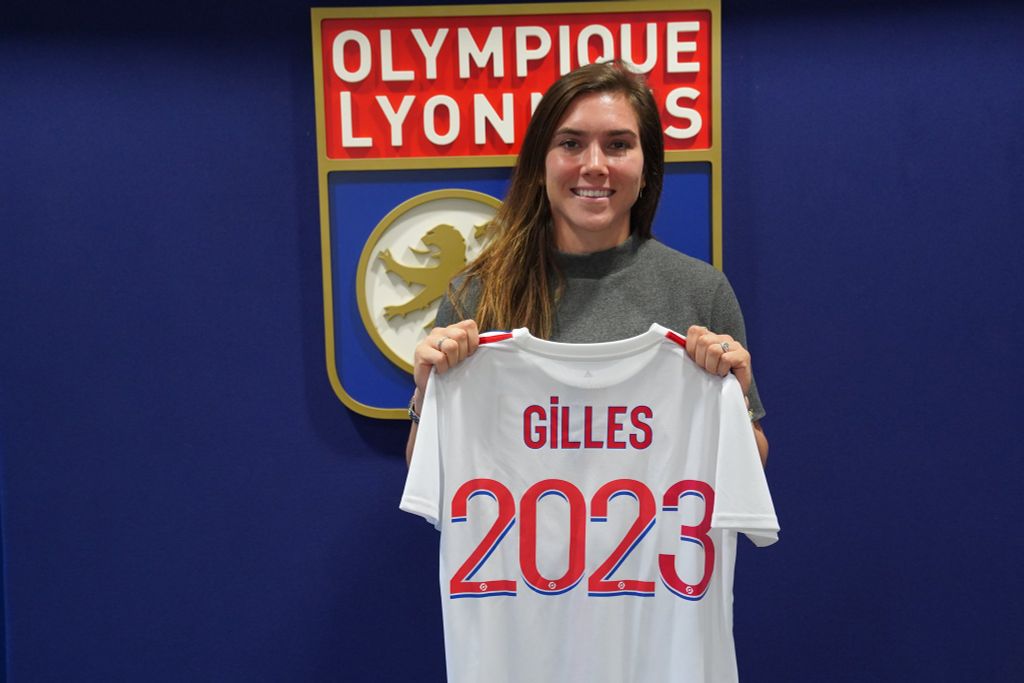 Less than a year after she left France to head to the NWSL, Vanessa Gilles is back, and better than ever.

This time, however, a new challenge awaits her in the country, as after spending three fruitful years over with Bordeaux, where she went she went from a raw youngster to one of the best in the world at her position, she has now joined the giants of French and European football, Olympique Lyonnais, who officially brought her in on a one-year loan from Angel City this week.

Having just played 13 games for the expansion club this season, due to a mix of international commitments and injury, it had been a frustrating first season for Gilles in the NWSL, one that has probably been more stop-start than she’d have liked.

For someone who only picked up the sport when she was 16 years old, was passed over in the NWSL draft, and didn’t become a full-blown international until she was 25-year-old, is the latest step in a pretty special journey for Gilles, one paved by perseverance and determination.

Yet, that’s just a credit to Gilles, who has continued to be the proof of where hard work can take players, as she now gets a chance to compete for Europe’s top honours for this upcoming season, something that would’ve once seemed impossible for the 26-year-old.

Lyon adventure a chance for Gilles to further enhance her growing global reputation:

Having played such a key role as a starter in Canada’s Olympic gold medal triumph back at the 2021 Olympics, she’s now become a regular contributor for Canada, one that is a locked-in starter for most games, something that teams will have certainly taken note of.

Through that, it helps explain how this move came about. Especially given that Lyon lost Canadian Kadeisha Buchanan, Gilles’s main national team centre back partner and regular for Lyon, to Chelsea this summer, that meant a recent long-term knee injury to Griedge Mbock Bathy only further stretched their depth at the position.

Therefore, as they hunted for a replacement for Mbock Bathy, Gilles's name likely came up, as they’d probably seen her play a few times when watching Buchanan represent Canada, giving an idea of what she could bring to the table.

From there, her situation at Angel City, where she’d been excellent when healthy, but forced to miss a lot of games this season due to international duty, before picking up what has been described as an overuse injury, Lyon took a peek at that situation, and next thing you know, a loan was set up.

Through that, it’s set up an excellent opportunity for Gilles. As seen in France, when she helped Bordeaux consistently overperform and become one of the next best teams after the D1Arkema’s big two of Lyon and Paris Saint Germain, even qualifying for the Champions League preliminaries in 2021, there was no doubt that she could play at a higher level.

Then, having made the move to be the centrepiece of Angel City, she showed there that she could be a genuine top-tier centre back in the league, one that could wreak havoc in both boxes, further solidifying her credentials as a top player.

Vanessa Gilles is going to be fun to watch in the NWSL, & she shows why 3 minutes into her regular season debut with Angel City

The growth in her attacking game continues to marvel, that’s going to be a huge asset for the #CanWNT/#CanXNT in the 23’ cyclepic.twitter.com/d3QIUmcZYJ

Because of that, this move is exciting. Not only will this be a chance to really prove those credentials, proving that she is indeed one of the best in the world, but this is also a chance for her to regularly test herself in an environment that’s unlike no other, which is also key.

For example, one big thing with Buchanan’s half-decade stint with Lyon wasn’t just her accolades, but her development as a player, as she’s developed into a cerebral centre back, one that is strong on the ball, is good on the ground and in the air, making her one of the best at her position.

Which, for Gilles, would be a nice template to follow. Having grown as much as she has, going from a centre back who was just known for her strong aerial presence to one that is strong on the ground, a lot better with the ball at her feet while still being dominant in the air, refining the technical side of her game even further would be huge.

And with Lyon, she’ll certainly get to do that, as they’re one of the technically gifted sides in Europe. With a strong group of players, their training sessions are typically of high quality, and they’re asked to play a fluid and modern style of play in games, one that demands their players to play a certain way.

As a result, not only will Gilles get a chance to play at an extremely high level with this move, but she’ll also get to really refine her game, allowing her to continue to hone the skills that she’s slowly been building.

For a late bloomer such as herself, that’s exciting, as having seen her rapid growth over the past three years, it’s fun to imagine what this move can now do for her, allowing her to continue her rise. 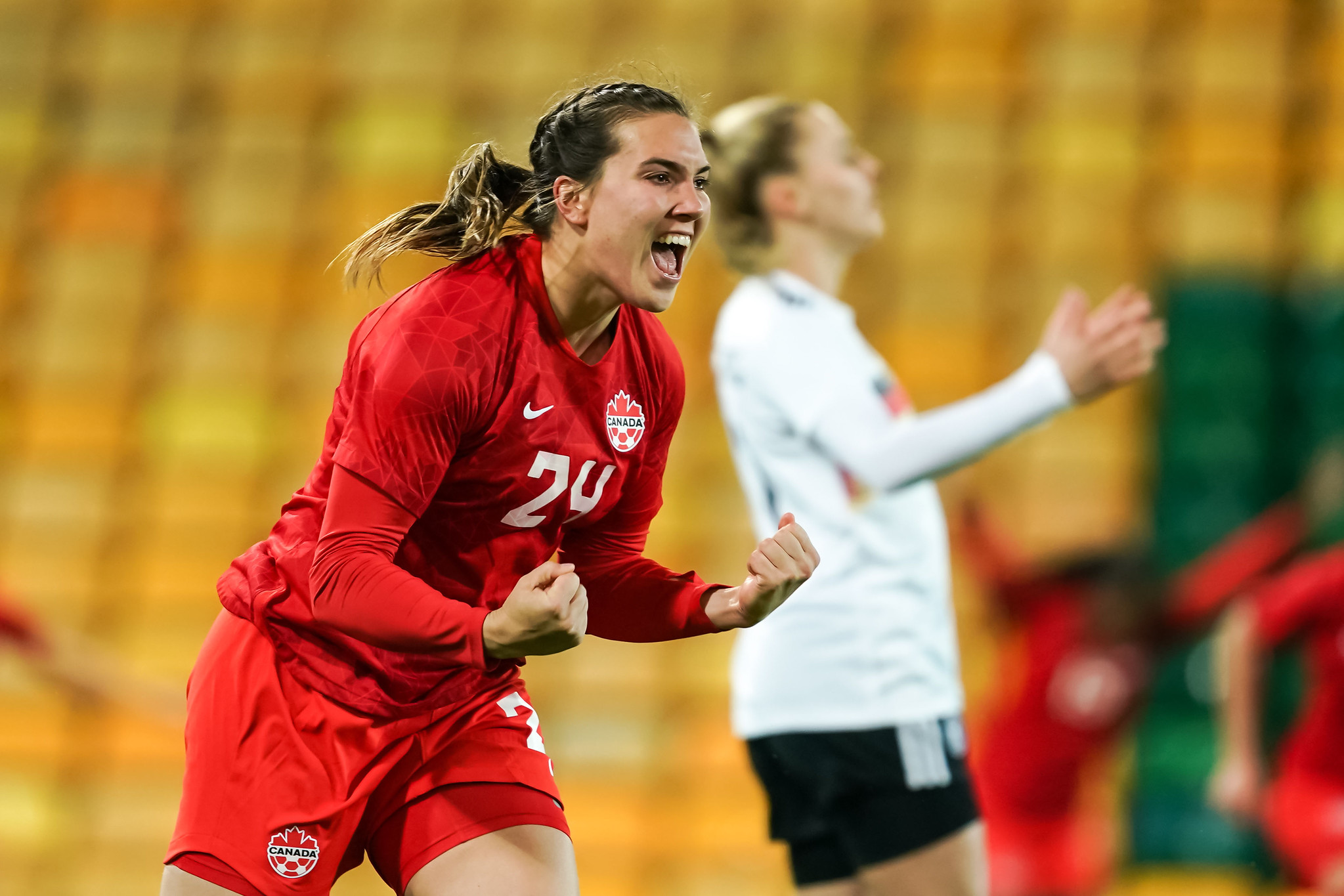 Perfect timing ahead of World Cup?

And now, Canada could stand to reap the benefits of Gilles’s move, too.

All of a sudden, with a World Cup less than a year away, Gilles setting out on a one-year loan with Lyon is perfect timing for Bev Priestman, who between Gilles, Buchanan and Shelina Zadorsky, will have no shortage of centre backs playing at a high level.

Especially given that Priestman has preferred to run with Gilles and Buchanan when healthy, having Gilles work and grow at the club where Buchanan really rose to prominence could be key, helping her further understand her partner.

You add the improvement that she will also now see, as well as the fitness and form that playing with one of the best clubs will have, Canada could get a new-look Gilles by the time the tournament comes around, only further bolstering their strong defensive depth.

Plus, that can have a domino effect, because much as Gilles improved and grew a lot by playing with the likes of Buchanan and Ashley Lawrence, who were top performers in top leagues, Gilles can now be another player of that calibre for youngsters to come up and learn from.

For example, how about Jade Rose, who at 19 has already arguably become Canada’s fourth centre back? Having her learn from Gilles, Buchanan and Zadorsky could be huge for her development, helping her find another level as a player.

Therefore, while Gilles will of course benefit massively from her time at Lyon, her Canadian teammates will also benefit from having Gilles play in that environment, further bolstering their crop of players playing at a big level.

Canadian dam continues to burst in terms of European moves:

Which, speaking of, is one of the more underrated aspects of this move. Not only is Gilles’s move to Lyon a big one for her, but it could have a knock-on effect down the road for future youngsters.

Especially given that in the last two years, Gilles, Jessie Fleming, Deanne Rose and Julia Grosso have all made moves to top clubs in top European leagues, it appears that more and more young Canadian players are making that jump than ever.

And with more and more Canadians now at the top clubs in France, England, Italy and more, that proves that Canadian talent is now a valued commodity, one that teams want to invest in.

That’s good news for the likes of current college standouts like Jade Rose, Jayde Riviere, Zoe Burns and Simi Awujo, for example, who much like Grosso, Fleming and Deanne Rose did out of college, will have options other than just the NWSL route that was typically taken before when they choose to turn pro.

Not to say the NWSL route is a bad one, per se, as the league remains very strong and has brought a lot of Canadians along, it never hurts to have European options, especially given the growth the continent has seen in the women’s game as of late.

Because of that, not only is Gilles’s move exciting due to her presence at a big club now, you can only imagine that there will be more to follow now, which is exciting, as the dam continues to burst on Canadian talent headed to that level.

Therefore, while she looks to make the most of this loan, potentially convincing Lyon to take a shot on her long-term (there is no option to buy in the deal), she’ll also look to have an impact on the next generation, showing the potential of this move.