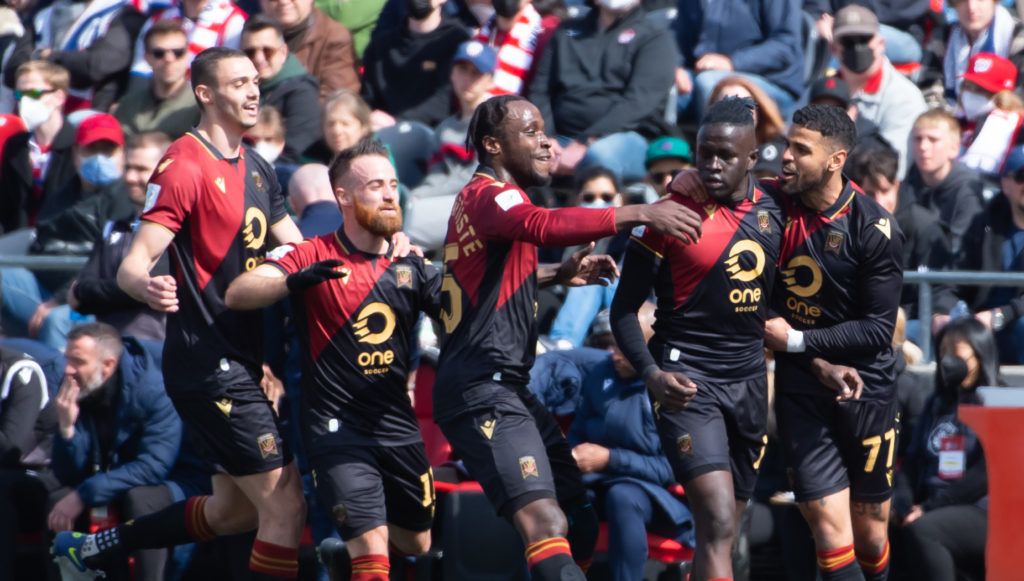 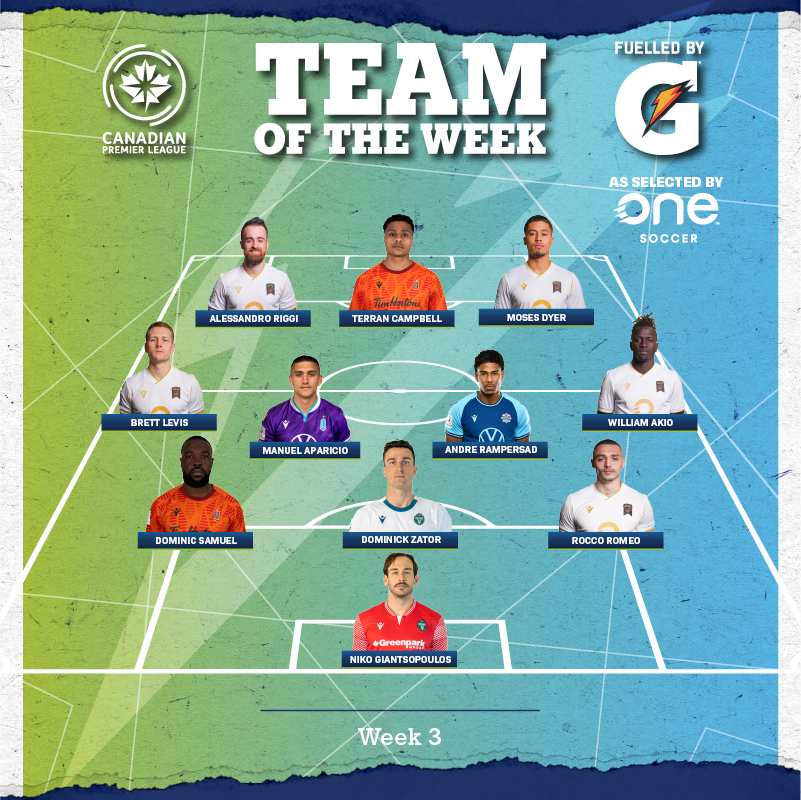 The Gatorade Team of the Week for the third week of Canadian Premier League action in 2022, brought to you by Kristian Jack and OneSoccer’s Oliver Platt.

York’s goalkeeper didn’t have the busiest night against Cavalry, but he was good when called upon, claiming crosses and slowing down play when needed. Giantsopoulos chose good opportunities to be aggressive and close down space, and he allowed centre-backs Dom Zator and Roger Thompson to step up into challenges with confidence.

His performance against Ottawa will be most remembered for his towering header that scored the visitors’ third of six goals, but the centre-back was also key to laying a defensive foundation to facilitate the rout. Romeo stepped up in a major way after defensive partner Andrew Jean-Baptiste left the game in the first half with injury, and he went on to record three interceptions and win possession seven times, making a team-high 81 touches and finishing with a 93% pass accuracy.

Zator was quite dominant against his former club on Friday, helping secure a clean sheet against a high-powered attack. He was unbeatable in the air — winning three of three aerial duels — and he contributed a lot on the ball, creating two chances and taking two shots himself with headers from set-pieces. He was a key part of York’s strategy for isolating Cavalry striker Joe Mason, whom he effectively marked out of the game.

Samuel was a rock at the back for Forge in their win over Edmonton, holding the fort so well that almost all of the players around him were free to get forward. Even Samuel himself had two successful dribbles when stepping up with the ball. He had 105 touches and a 91% pass accuracy, winning possession 10 times and effectively quashing any of the Eddies’ attempts at a quick counter-attack.

The 23-year-old delivered one of the most dominant attacking performances the CPL has seen from an individual player in Valour’s win over Ottawa. Tragically, he won’t get credited with an assist for any of the three goals he created, but Akio was exceptional blazing down the right wing for Valour. He continuously drew in defenders and beat them, either with his own dribbling ability or a well-placed pass. Eventually, the floodgates opened when Ottawa had to defend more conservatively against Akio and opened space for other Valour players.

It was a somewhat disjointed game from both sides in Langford, but Rampersad was a major bright spot for Halifax. He had a clear desire to push the ball forward with his own ability on the run, and to win it back when the Wanderers were out of possession — which he did a staggering 15 times.

After just missing out last week, Aparicio slots into midfield here on the back of another scintillating performance at Starlight Stadium. He scored Pacific’s first goal with a good headed finish, but he created a number of other chances and made 22 passes in the final third. It’s not every day you see a five-foot-six attacker win three out of four aerial duels.

Levis scored what he himself called the best goal of his career on Sunday, with a tremendous run through midfield (stepping beautifully around former TOTW defender Diego Espejo) before coming to the top of the box and scoring from 20 yards with his weaker right foot. He also helped create from the middle for Valour and he made a team-high 13 passes in the final third.

Dyer is now in an early lead for the Golden Boot race (tied with Alejandro Díaz), after scoring his second and third goals of the season in Ottawa. He won and converted the penalty that began Valour’s flood of goals, and he added another from open play with a very good finish on Akio’s pass in the second half.

Easily the best game of his young Forge career. Campbell scored twice and assisted another in a man-of-the-match performance to beat FC Edmonton, showcasing his ability to drive into the box and make smart plays that made him so effective the last three years for Pacific.

The former HFX Wanderers winger scored two goals on three shots against Valour, first getting on the end of a great pass from Akio and then adding a second with some tricky footwork and a good finish under the goalkeeper. He also had a team-high three successful dribbles, and he helped create a few more chances for Valour with his ability to hold up the ball and beat defenders.