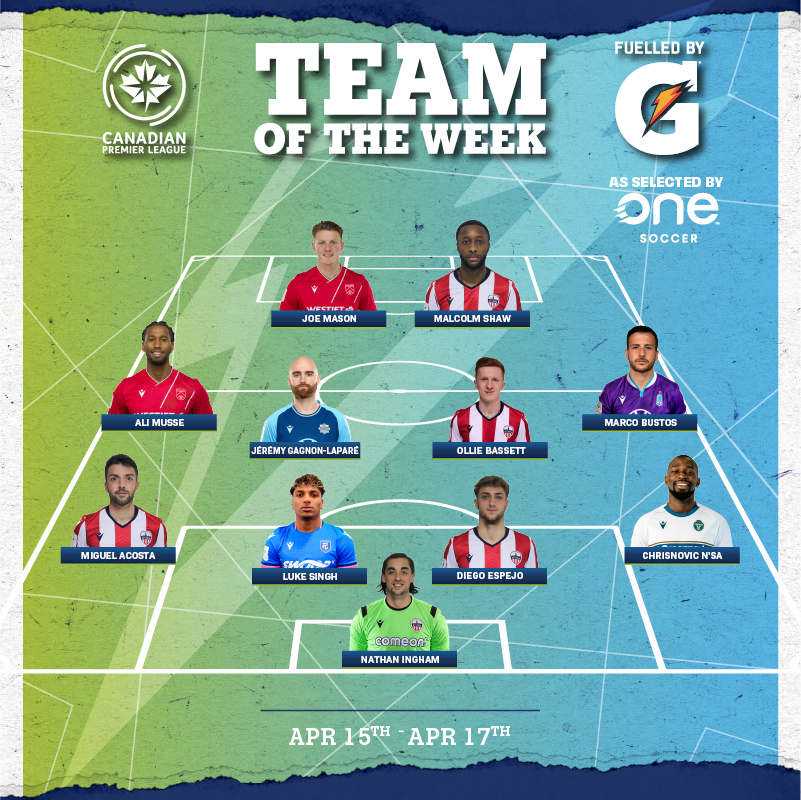 The Gatorade Team of the Week for the second week of Canadian Premier League action in 2022, brought to you by Kristian Jack and OneSoccer’s Oliver Platt.

Ingham made five saves for Ottawa en route to his second consecutive clean sheet, preserving the club’s unblemished record two games into the 2022 season. He made a massive double save on Samuel Salter and Joao Morelli just after halftime, with the game still 0-0, that kept his side in the fight, plus two other diving stops on Morelli later in the half.

York’s indomitable right-back won 11 of his 16 duels against FC Edmonton, with an astounding eight tackles and three interceptions. Playing up and down the touchline, N’sa demonstrated his excellent workrate and defensive ability and gave York a well-balanced backline playing opposite of left-back Diyaeddine Abzi.

Espejo made five clearances and won two tackles against the Wanderers. He won five duels as well, and led his team with 51 accurate passes. He steered the ship from the back for Ottawa as they played in a back-four system, changed from the three they played with on opening day, to ensure they still defended well even without the suspended Drew Beckie.

The Toronto FC loanee was a busy man at Clarke Stadium against York, with a team-high 59 touches and seven interceptions — plus he won both of his attempted tackles. Singh was the more adventurous centre-back of Edmonton’s back three, playing on the left side, and he was difficult to mark in the air both in his own box and at the opposite end when attacking set-pieces.

Thanks to the defensive stability from his centre-backs, Acosta was able to get up the field and contribute in attack. He created two chances — one of which was his assist to Malcolm Shaw — and broke into the final third nine times. The Spaniard also made five clearances (tied with Espejo for the team lead), contributing off the ball as well as in possession.

Does anything need to be said other than “three assists”? The Pacific right winger created seven chances, made 21 passes in the final third, and had four shots of his own, all with a 90% pass accuracy. He could’ve had a fourth assist were it not for Matthew Baldisimo’s handball on a disallowed goal, and Jonathan Sirois denied him a goal from the penalty spot. Bustos said in preseason we’d see him return to his MVP form, and so far he has not disappointed.

Bassett continues to settle nicely into his role as a box-to-box midfielder in Ottawa’s double pivot under new coach Carlos González. He won possession nine times — twice in the final third — and posted an excellent 92% pass accuracy as he tried to find the likes of Ballou Tabla or Acosta in space along the right flank.

Despite the loss in Ottawa, Gagnon-Laparé was a positive influence in a match where he was heavily involved centrally. His 86 touches were more than anyone else in the game, as were his 68 total accurate passes, and he also won four of six duels. He and opposite number Ben McKendry engaged in a difficult battle all afternoon, as Gagnon-Laparé continues to prove he’s one of the top central midfielders in the league.

Playing on the left of the Cavs’ front three, Musse was part of almost every attacking opportunity for the team in a man-of-the-match performance against Forge. He had four shots — one of them his own goal, and another the acrobatic volley that set up Joe Mason’s — and he helped drive the ball forward in possession with direct play and good footwork when taking on defenders. Musse finished with a spotless 100% pass accuracy (though he was more keen on dribbling forward himself than picking out risky passes), and he was an important part of the Cavs’ frontline pressing without the ball.

It was Shaw’s header that won the game in the end for Ottawa against Halifax, as the striker did very well to track Acosta’s cross and get enough power on the ball to send it back across goal into the net. He also had two other shots in the game and he created three chances, operating mostly on the right side in Atleti’s two-striker setup.

The high-profile striker was given some freedom to roam against Forge, as coach Tommy Wheeldon Jr. explained postmatch, and it suited him well. He did a lot of the work leading up to Cavalry’s first goal, creating a pocket of space for himself with off-ball movement before an excellent step around Kyle Bekker to eventually get the ball to Musse. Then, he was quickest to spot the spilled rebound, and he was rewarded with an easy finish to equalize.