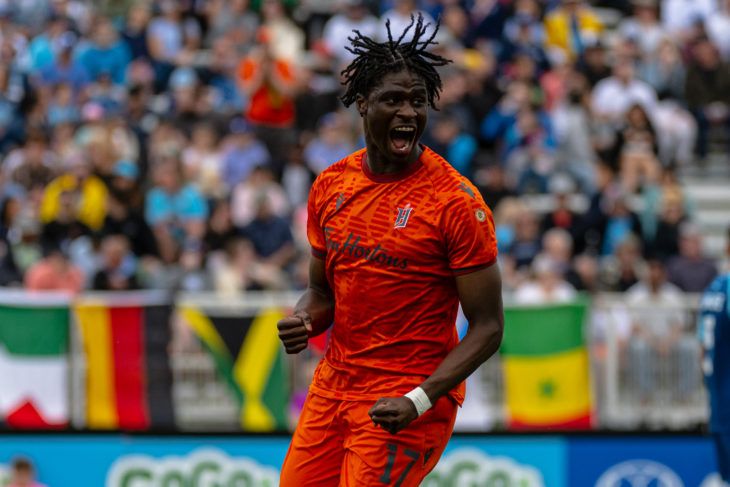 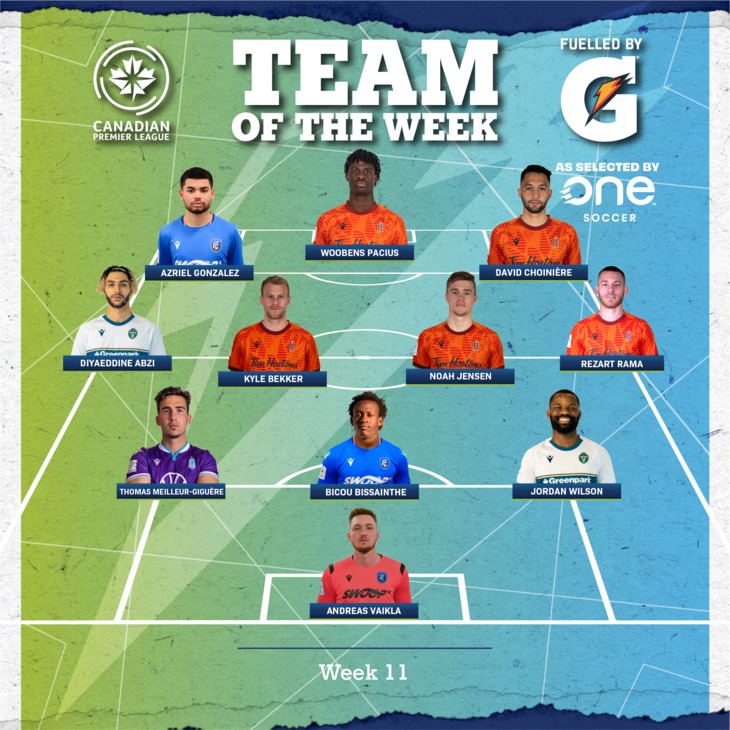 The Gatorade Team of the Week for the eleventh week of Canadian Premier League action in 2022, brought to you by Kristian Jack and OneSoccer’s Oliver Platt.

The CPL’s saves leader secured his second clean sheet of the season on Sunday in the Eddies’ win over Atlético Ottawa. He only received official credit for one save — a superb, brave stop to deny Malcolm Shaw early in the game — but he commanded his box well against an Ottawa side that had some dangerous chances.

Meilleur-Giguère effectively owned the ball in Pacific’s 0-0 draw with York United on Saturday. With 135 touches and 113 successful passes, pretty much everything went through him in this match as Pacific attempted to play consistently out of the back. Meilleur-Giguère coped well with York’s transitional attacks, making five clearances and two interceptions while winning five out of six duels.

The Haitian international gets credit for the goal that earned FC Edmonton’s first win of 2022, as he found the ball at the back post on a corner-kick just after the hour mark. Aside from the attacking contribution, though, Bissainthe was a rock in the middle of the Eddies’ back three, winning possession 12 times and making four interceptions to prevent Atlético Ottawa from scoring.

A natural central midfielder, Wilson has looked sharp at centre-back for York when called upon. Facing a Pacific side that had a vast advantage in possession on Saturday, he and partner Dominick Zator were well up to the task. Remarkably, Wilson won all eight of his duels and won all four of his attempted tackles.

York’s stalwart left-back appears in the Team of the Week one final time before he makes his move to Pau FC in France next week. Playing his last CPL game in front of the York Lions Stadium faithful, Abzi was clearly keen on putting on a show, with a number of very dangerous runs along the left flank, with an astonishing 10 attempted dribbles, nine crosses, and three chances created. He wasn’t able to score either of his own two shots, nor were his teammates able to finish the attacks he created, but nonetheless Abzi showed a lot of the skills that have impressed clubs around the world.

Forge’s captain was a commanding central presence, playing a little further back than he had in recent contests in the absence of Alessandro Hojabrpour. He progressed the ball into the attacking third 13 times, winning possession 10 times as well as he dominated the Wanderers’ midfield. If Bekker plays Forge’s next match against Valour FC, he’ll be the first player to appear in 100 games (all competitions) for a CPL club.

The young midfielder did very well in this contest, scoring a goal in his first start since May 14 (a match in which he also scored). Jensen’s late-arriving runs into the penalty area made him a consistent threat from the top of the box, as he found three shots for himself and also created a further two chances for teammates.

Rama has continued to settle in nicely on the right side of Forge’s backline as a traditional defensive fullback. He had a team-high 86 touches against HFX and continued to buzz around the attacking area, with 20 passes in the final third. Rama was able to get forward very consistently against the Wanderers’ back four, as Forge consistently attempted to attack from the right flank.

González’s delivery to the back post from a corner was just about perfect in the 65th minute, as he found Bissainthe for the Eddies’ winning goal. The Las Vegas native finished with four shots and three chances created, looking lively along the left wing throughout his 89-minute shift.

Pacius banked his third goal of the year in Halifax, reading space in the box well. He was the focal point of Forge’s attack in the middle, helping hold the ball up but also looking to direct balls goalward whenever possible. Pacius only had 18 touches against the Wanderers, but he nonetheless made good use of limited possession, with three shots.

The young Québecois winger was electric at the Wanderers’ Grounds, with four chances created — including the assist on Jensen’s goal. Choinière’s tricky dribbling and creativity were the impetus for both Forge goals in the first half as he continued to impress cutting in from the right wing