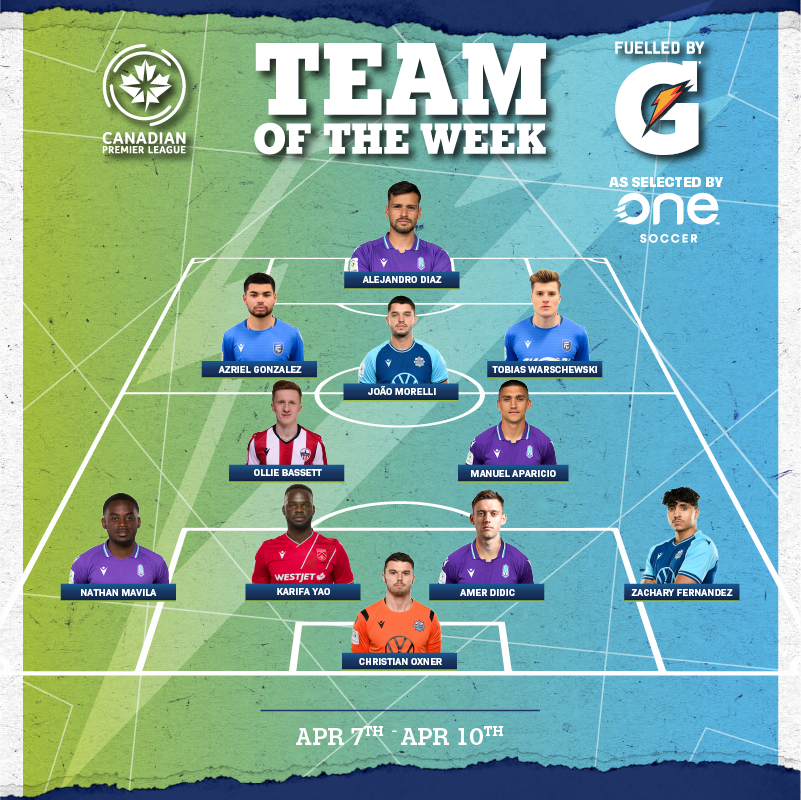 The Gatorade Team of the Week for the first week of Canadian Premier League action in 2022, brought to you by Kristian Jack and OneSoccer’s Oliver Platt.

The Wanderers goalkeeper stepped back in between the posts after a frustrating 2021 and looked solid for the visitors in their clean-sheet victory over York United. He made two important saves and distributed the ball well en route to a solid victory to open the season.

Halifax’s new right-back was sharp in his debut for the club, with seven passes into the final third and five more individual entries, plus three interceptions. He combined well with winger Cory Bent to provide explosive, direct attacking play along the right flank and help the Wanderers put York under pressure.

The CF Montréal loanee was outstanding as usual playing in the middle of Cavalry’s back three, recording two tackles and three interceptions and winning possession 10 times. He made a team-high 58 accurate passes (91% success rate), proving himself as a key cog in the Cavs’ possession approach.

Making his first appearance for Pacific after three years with FC Edmonton, Didic was a dominant defensive force in the home opener. He made six key clearances and he won all four of his aerial duels — including his excellent headed finish on Marco Bustos’ free kick to score what would ultimately be the winning goal against Forge FC.

Another debutant for the Tridents, Mavila stepped in to fill Kadin Chung’s shoes very comfortably at fullback. He won possession 11 times, including four interceptions, playing a key defensive role for Pacific on top of his ability to join the attack and progress the ball forward along the left flank.

The Northern Ireland international played in a deep-lying midfield role for Ottawa in his club debut. He won possession 13 times, more than all but one other CPL player this weekend (tied with Valour’s Rocco Romeo), and he looked very bright trying to play balls into the final third and create chances from outside the penalty area.

Pacific’s creative magician was excellent again for the Tridents in their home opener, drifting from touchline to touchline going in search of the ball. He combined well on the left side with Nathan Mavila and Josh Heard, allowing those two to play directly up and down the touchline by playing them through into space.

Not much needs to be said of Warschewski’s performance. The German forward scored one of the finest goals in CPL history with his bicycle kick to secure a last-minute draw for the Eddies in their home opener, earning the reward after a strong all-around performance which saw him lead his team in touches (58), dribbles (11), and duels won (9).

Playing in a false nine role for Halifax, Morelli covered almost every inch of the pitch at York Lions Stadium, dropping deep to get the ball as much as possible and putting the York United defenders under pressure at the other end. He had five shots for himself, and he won the game for the Wanderers with a clinical goal from the penalty spot to get started early after winning the Golden Boot in 2021.

González won five duels and made 10 passes into the final third for Edmonton in their home opener, helping run their attack from the left side in the second half against Valour as the Eddies sought to play more aggressively. He operated primarily from the left half-space, linking up well with Warschewski and Julian Ulbricht to try and provide a creative element.

The Mexican centre-forward got the party started early on Vancouver Island, scoring with a great finish less than five minutes into Pacific’s home opener against Forge. He had four shots (three of them on target) and six individual touches in the box, also doing important work with his back to goal trying to set up his wingers and midfielders for chances in the penalty area.