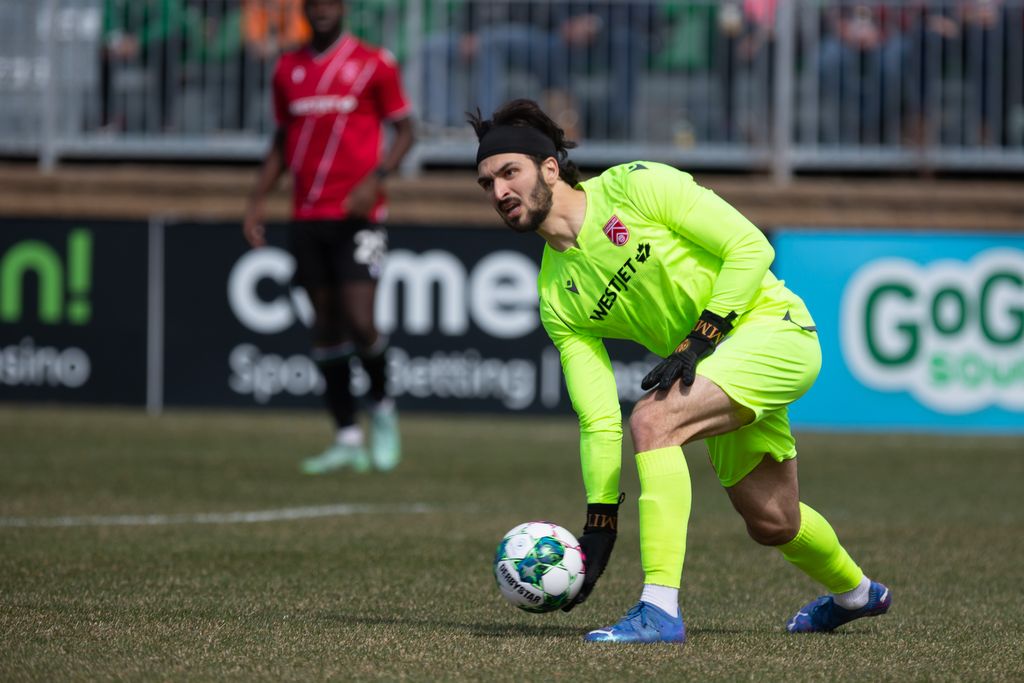 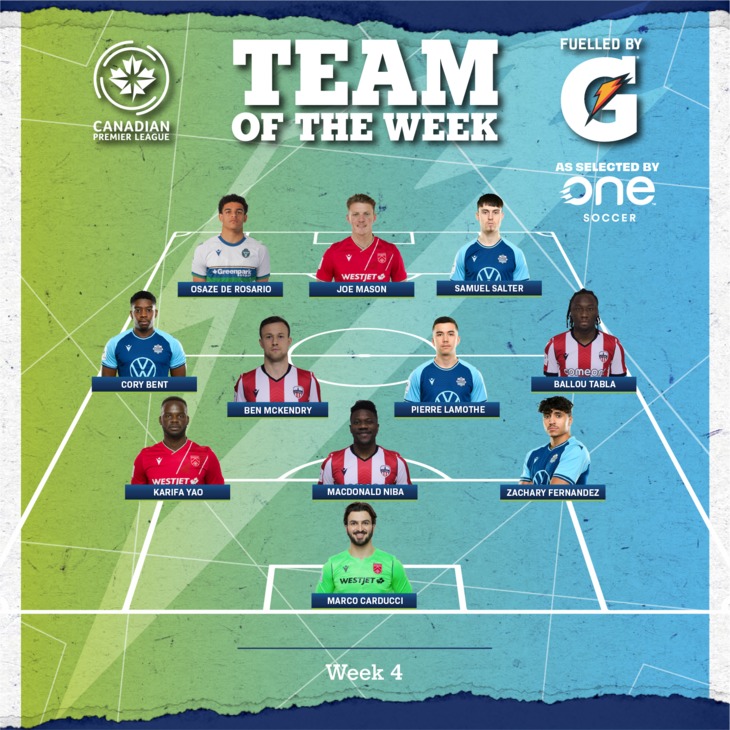 The Gatorade Team of the Week for the fourth week of Canadian Premier League action in 2022, brought to you by Kristian Jack and OneSoccer’s Oliver Platt.

Likely the story of the weekend in the Canadian Premier League, Marco Carducci marked his return to action with a brilliant performance in Cavalry’s home opener. The 25-year-old had four saves, including a worldie on Marco Bustos, to secure his side their first win and clean sheet of the season.

In his first home match with HFX Wanderers, Fernandez proved to be an absolute handful for the FC Edmonton backline. His lovely cushioned header assisted Samuel Salter’s game-winner. He also won three tackles, 10 duels and was fouled a team-high four times, including being brought down in the Edmonton box late in the match, allowing Akeem Garcia to score a crucial insurance goal on the resulting penalty kick.

Valour match aside, Ottawa’s defensive resilience so far this season has quickly drawn comparison to their Madrid namesake. On Friday, it was Niba who led yet another strong showing at the back. The 27-year-old had four tackles, and won nine of his eight duals during the match as Atlético was somewhat unlucky to leave York Lion Stadium with just a single point.

In his first few matches in the Canadian Premier League Ballou Tabla showed flashes of his incredible talent. Friday was his most complete performance of the season to date, as he finally found his way onto the scoresheet late in the second half. Tabla was all-action during the match, contesting 21 duals, winning possession eight times and being fouled four times over the course of 90 minutes.

It was a tidy performance in the middle of the park for the Québecois midfielder against FC Edmonton. Lamothe completed 88% of his passes during the match, including 16 into the final third, and won four tackles to help HFX to their best offensive performance of the season.

After starting last week’s drubbing against Valour on the bench, McKendry proved why he deserves to be a fixture in the Atlético Ottawa XI. He was at the heart of Ottawa’s midfield block, winning two tackles, two successful dribbles and contesting 10 duals. He also won possession six times over the course of the 90 as Ottawa picked up a big point on the road.

After being held scoreless in Canadian Premier League action last season, Bent already has a pair of goals to his name in 2022. The 2019 U-Sports draft’s first overall pick was the quickest to react to a loose ball in the Edmonton box in the 17th minute and his hard work was rewarded with HFX’s opening goal.

Salter’s introduction into this weekend’s match against Edmonton at half-time was an instant game-changer for HFX. The 21-year-old attacker showed brilliant composure to score the match’s winning goal and was perhaps unlucky not to get more. He looked to be in on goal later in the half but the ball got caught up in the Wanderers Ground turf. With Joao Morelli out for the season, Salter will be critical to the Wanderers’ attack this year.

After being starved of service last week against York, Mason was once again the danger man for Cavalry against Pacific. His stunning first-half strike secured the win for the Calgary side. Mason was active throughout, with five touches in the Pacific box, won possession twice in the final third and had an impressive 83% pass completion rate.

With his father in attendance at York Lions Stadium, Ozase De Rosario found the back of the net for the third straight match, this time with a well-taken penalty kick. He once again looked threatening throughout, with seven touches in the Ottawa box. With Lowell Wright returning from Canadian U-20 camp Martin Nash will have some difficult decisions to make in selecting his attackers. De Rosario is making that decision a little easier for him.