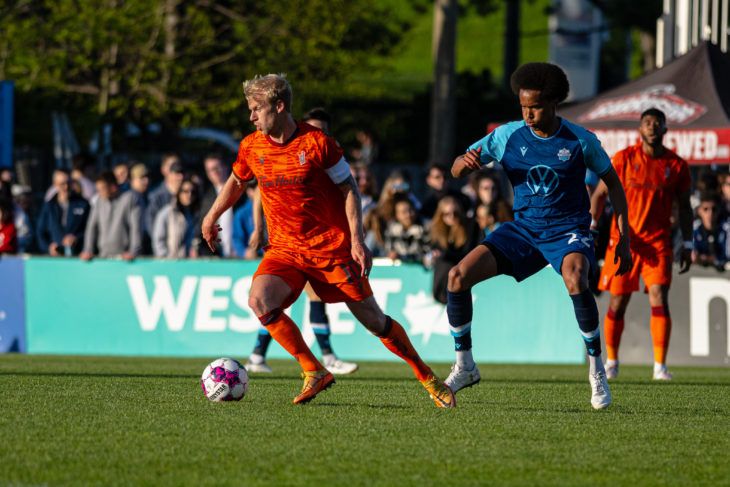 The Gatorade Team of the Week for the seventh week of Canadian Premier League action in 2022, brought to you by Kristian Jack and OneSoccer’s Oliver Platt. 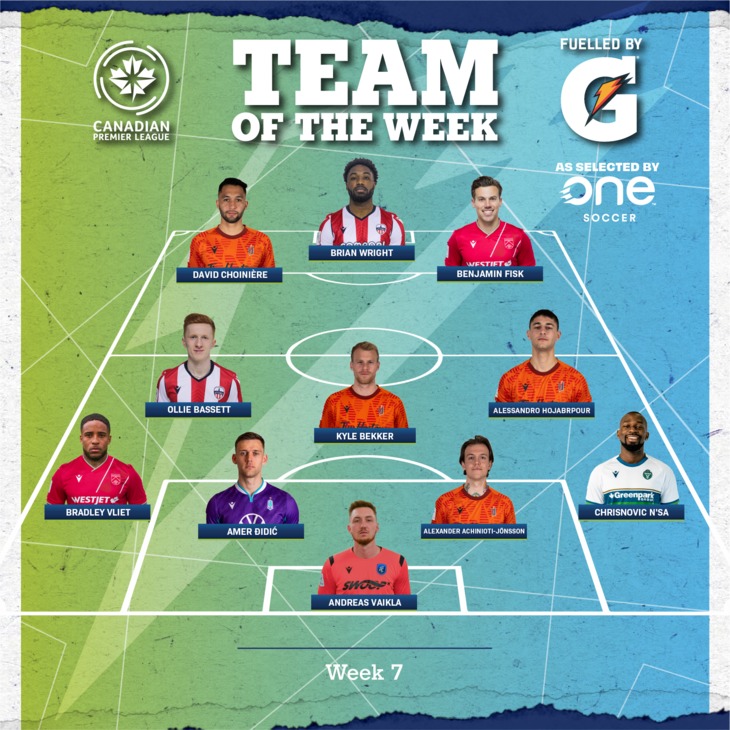 The Canadian Premier League saves leader added another three to his tally over the weekend, including a pair of brilliant stops on Brian Wright. He now has made 25 saves on the season.

York United became the first opponent to keep a clean sheet at Starlight Stadium this season, and a big reason for that was the play of Chrisnovic N’sa. He rarely put a foot wrong during the match, completing 94% of his passes and making a pair of interceptions.

On the other side of the defensive battle at Starlight Stadium, Amer Didic once again stood tall. The centre-back had two interceptions, three clearances, and won possession back seven times as he led his side to their second clean sheet in the last three matches.

Once again playing alongside new faces at the back for Forge, Alex Anchinioti-Jönsson excelled. He had three interceptions, won two tackles and his generally tidy shift at the back allowed the Hamilton side a solid base on which to build their best offensive performance of the season.

In his first Canadian Premier League home start, Bradley Vliet was dominant. He had more of the ball than any other Cavalry Player at the weekend, completing three dribbles and four crosses. But it is what he did without the ball that really shone through, as Vliet put up a team-leading nine duels won and two interceptions.

From the base of midfield, Hojabrpour continues to do an excellent job of providing structure and support. He also provided a brilliant assist for Forge’s opening goal, making a great run into the box and slipping his defender before playing an inch-perfect low cross to David Choinière at the back post.

Bekker used Friday night in Halifax as an exhibition as to why he is one of, if not the best, passers of the ball in the Canadian Premier League. The Forge captain’s passing range, switches of the field, through balls and everything in between was the spark that ignited a four-goal performance from the Hamilton side. Bekker had two chances created and completed 89% of his passes during the match.

For the second straight week, Bassett makes the team of the week, and for the second straight week, he also scored a goal, the winner in a 2-1 victory over FC Edmonton on the road. This time, his goal came from the penalty spot. Bassett continues to be one of the best chance creators in the Canadian Premier League with four more this past weekend, including 20 passes into the final third.

For most of 90 minutes against Valour FC, Cavalry struggled to create chances. Ben Fisk had no such problems. He created four chances and had 18 passes into the final third. Defensively, he also won possession back nine times, including twice in the final third. He also wore a cowboy hat while celebrating Cavalry’s winning goal which has to count for something.

After being denied by Vaikla moments earlier, Wright showed great composure to slot home a brilliant Ballou Tabla through ball to give Ottawa their opening goal this weekend. He could have easily had more, as the Atleti striker got himself into good positions throughout the match and had three shots on target.

Choinière opened the scoring for Forge on Friday with an inch-perfect slotted finish. He played a brilliant chipped pass in the buildup to their second goal. Then he headed home Forge’s third goal as part of a dominant offensive afternoon. He also had four successful dribbles as he consistently drove the ball at the Halifax backline.