GANGUE-RUZIC: On Alejandro Diaz sale and the true cost of CPL's transfer strategy 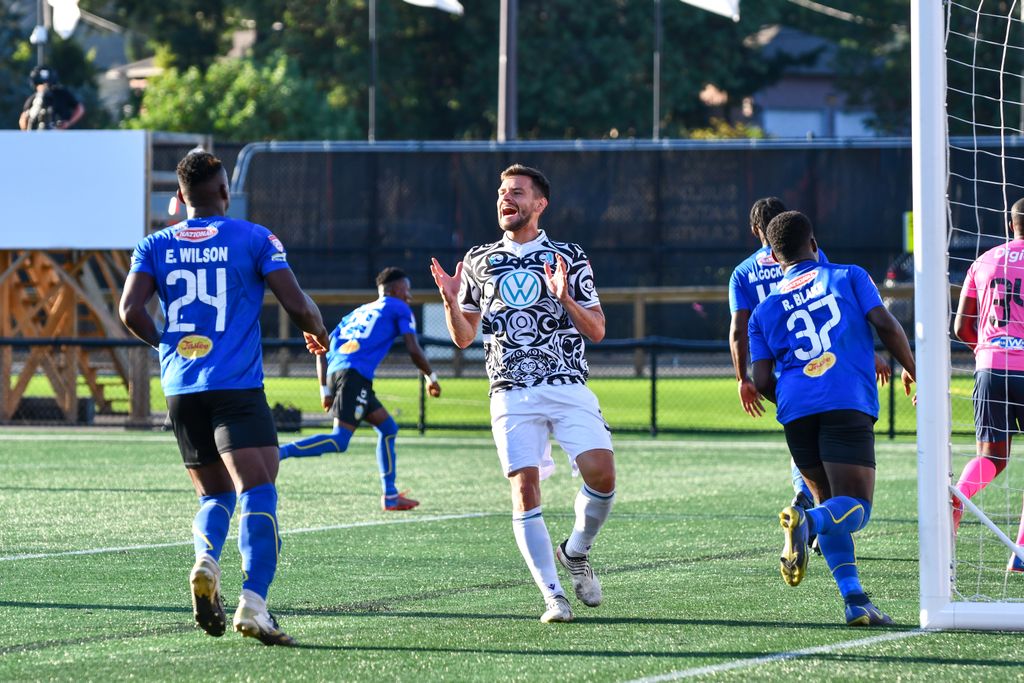 VANCOUVER – In a shocking turn of events, Pacific FC has bid farewell to its all-time leading scorer, as it was announced Wednesday that Alejandro 'Wero' Díaz is heading to Norwegian side Sogndal Fotball on a transfer.

In Díaz, they've just acquired the services of a verified mercenary, one who has more than proven his credentials as a goal-scorer for the Tridents.

After struggling in Mexico for years leading up to the move, scoring just four goals in his first five years as a pro, he proved his mettle in CPL, racking up 31 goals and nine assists in 62 games for the club – a rate of a goal exactly every other game. Since joining the team in 2020, El Wero has proven to be the epitome of consistency ever since landing on Vancouver Island and helping the team to a CPL title in 2021.

He now exits the club as a CPL champion, marking the end of a successful stint north of the border, for all intents and purposes.

Who else but Were Diaz with his 13th goal of the season? 👀#CanPL | 🔴 https://t.co/7JFAUhgjL6 pic.twitter.com/l63DBoTfnr

While the league celebrates another successful transfer, the timing of this move is quite strange for Pacific FC.

In the midst of a busy 2022 campaign, one in which they're juggling a tight playoff race in league action as they look to repeat as CPL champions while also navigating a Concacaf League run, losing a player who has already scored 16 goals in 21 games as Díaz has is far from ideal.

When you consider that he is currently the leading scorer in both the Concacaf League (3 goals) and in the CPL (13 goals), that sort of production is very tough to replace, especially at this stage of the season.

Of course, sometimes a team offers something that can be too good to be true, and given that Díaz was re-signed to what was announced as a multi-year deal earlier thie year, Pacific will likely be compensated quite handsomely for selling Díaz to Sogndal, which softens the blow a bit.

On the flip side, the Tridents must now must find a way to fill his shoes, and fast, as they've still got a lot to play for – a tall task no matter the fee received.

They do have some potential replacements internally, as Djenairo Daniels has had good flashes this year, scoring two goals, while Matteo Polisi could also stand to carve out a bigger role, but it'll certainly be a tall ask for them to immediately replace someone who was scoring at the rate that Díaz was for the team.

Pacific FC fans might be concerned that the timing of the move actually hurts the club's short-term goals. Losing your top scorer in a season where so much of the scoring is coming from a single source doesn't exactly help reinforce ambitions to repeat as champions, nor does it inspire confidence in a deep continental run in Concacaf League, either.

The fact that Diaz was under contract for next season also makes the timing a bit puzzling; was his market value going to be significantly lessened with a likely Golden Boot, MVP, and potentially another CPL title to his name during the winter window?

While Sogndal Fotball's needs are immediate, there's a case to be made that other clubs could have presented even bigger offers for the 26-year-old later down the line.

So, unless Pacific FC has another option in waiting, there are bigger questions to be asked; the biggest of them all, of course, being who will replace Díaz?

Per source! Alejandro Díaz to Sogndal will be a #CanPL record transfer once he hits all his bonuses. Base-fee was CAD $200,000+. Pacific FC will also receive various performance-based add-ons. This is a great deal for the club and the league. 🇨🇦🤝🇳🇴 pic.twitter.com/7OjtaEWzjE

The good news here is that this isn't Pacific's first rodeo when it comes to this sort of business.

Despite losing club cornerstones Lukas MacNaughton and Kadin Chung this past offseason to Toronto FC, they replaced them while arguably getting better as a team, which shows that they shouldn't be fazed by such a loss.

Similarly, losing midfielder Alessandro Hojabrpour and striker Terran Campbell to Forge FC forced Pacific to adapt – and adapt they did.

However, this will be a much tougher ask considering the stage of the campaign, and especially given the kind of goalscorer that Díaz is, making it interesting to see how Pacific proceed, as their season rolls on with a crucial home game at the weekend, followed by the first leg of their Concacaf League Round of 16 tie just days later.

So, as we reflect on the latest key departure of a busy wave across the CPL, the credence of the league continues to grow abroad.

That, at the very least, is something that Díaz's move continues to prove.

The concern is what does that growing reputation actually cost? Pacific's fate for the rest of 2022 lies in the balance of that important distinction.