From L1O to 2. Bundesliga, Belal Halbouni has eyes on CanMNT World Cup spot

FC London forward Belal Halbouni was given a tall task one day in League1 Ontario – a task the 6-foot-2 tall attacking midfielder rose to meet.

Nominally a rather creative player, the switch to defence represented a deep betrayal of his own instinct. But, young and hungry to prove his worth, Halbouni took the chance.

It quickly paid off for him.

In fact, the move looked more and more like a stroke of genius with each passing match, as Halbouni looked a natural at centre-back, as if he'd grown up playing as a backline bruiser for years.

As a result? Come end-of-season, he'd been noticed by German outfit Werder Bremen.

We often talk about the need for developmental pathways in Canada. Halbouni's story is the perfect example of why they're so important.

You're right to wonder how and why a forward-turned-defender in a semi-pro league could even land on the radar of an iconic German club.

First, it's important to note that Halbouni had been scouted as an option to first join Werder Bremen's reserve team – a shot at getting a look, so to speak.

But for someone playing in League1 Ontario and having freshly been converted to a new position, it was a dream move all the same.

From there, things went great for the then-20-year-old, who impressed over his two-and-a-half years in Bremen, regularly playing with the reserve team while sometimes training with the first team, who really started to view him as a long-term option.

So, two years later and with a contract expiring this year, Halbouni had all sorts of options on the table, as he pondered staying with Bremen or moving elsewhere.

After a good think, which included an offer to join Bremen's first team, Halbouni finally made his decision – he'd stay in Germany, but instead join FC Magdeburg in the 2. Bundesliga.

"I'm very excited to start this new chapter for me," Halbouni told OneSoccer. "And I'm ready to give my all for this club. Taking that next step to the 2. Bundesliga is the right decision for me. It's a very competitive league, and it's a high level of football."

Intrigued by the project that playing with freshly-promoted Magdeburg offered him, the decision was a no-brainer for Halbouni, who made 23 appearances for Bremen's reserve side in the fourth division this season.

"Werder Bremen is a great club," Halbouni said. "I'll always have a special spot for them in my heart, and I’m very appreciative of them for giving me the chance when nobody wanted to, as they are the biggest part of my development as of right now. And I'm thankful for everything they've done for me.”

Halbouni continued. "Mageburg has a very good project for me, specifically. And I feel like I have the opportunity to be a good piece in a good team, so as long as I perform well and stay fit, I feel like everything should play out the way I and the club projected."

There's no reason to believe otherwise. Not only is the 2. Bundesliga commonly viewed as one of the best second divisions in Europe, with little drop-off between it and the first-tier Bundesliga, but the league is also seen as a great developmental circuit, where all sorts of talents have emerged.

For Halbouni, Magdeburg could be a great spot to continue his development, as he enters what is just his third full season abroad. Having slowly eased into life in Germany the first two years, he took a big step forward this past season, and showed that the 22-year-old isn't far off from even bigger things.

Considering how young he is and playing in a position where players tend to peak later on in their careers, you can understand why many are keeping a close eye on him... for both club and country. 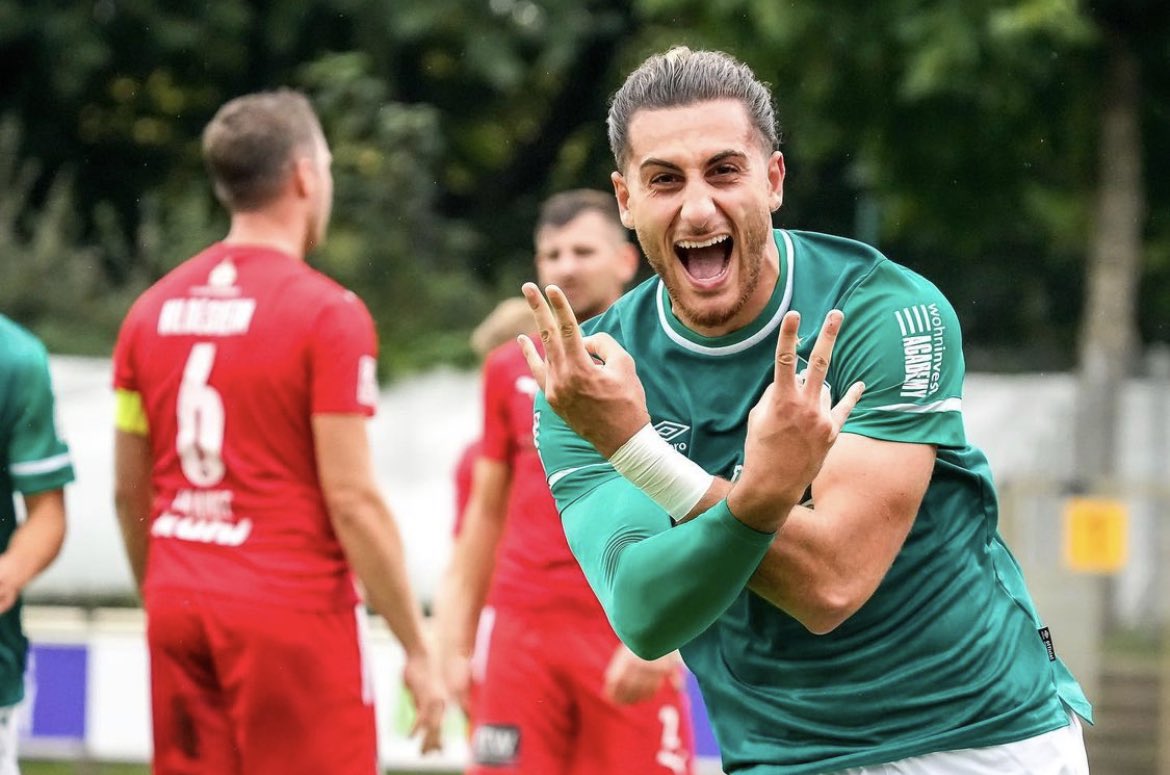 Now, with Magdeburg, Halbouni has no shortage of personal goals for the season. Of course, playing regularly is a big one, and winning the title, a more obvious ambition.

But the big dream? Breaking into the Canadian Men's National Tteam fold.

It’s a big ask, of course, as Canada did just end a 36-year World Cup drought with a tight-knit brotherhood and an ever-deepening pool of options, making it hard to consider a young centre back playing in the 2. Bundesliga as an obvious shout, the way it once was... but it's also not as much of a longshot as one might think, either.

Firstly, Halbouni has been on the Canadian radar before, having been called up to a "Camp Poutine" back at the start of 2021, where Canada typically brings in intriguing youngsters and players out of season to train and play some friendlies.

Secondly, it's worth noting that Scott Kennedy has become a regular for Herdman these past 16 months while also playing in the 2. Bundesliga with SSV Jahn Regensburg.

Finally, with Canada still being quite thin at centre-back relative to other positions, there is more chance for competition at that position than there is at, say, striker. The path is clearer, as such.

There is no reason why Halbouni can't dream of one day cracking Canada's squad, maybe as soon as before this upcoming World Cup. That's his intention, anyway.

Herdman's been keeping tabs of his progress. If he gets those reps in with Magdeburg? He could be well on his way.

"My goal is to play with my focus on my club, because that will lead me to the national team," Halbouni explained.

"We stay in contact, me and John Herdman. He's a very nice guy, and I appreciate every time he gets back to me, especially seeing that he's such a busy guy working with his camps and team selections. It's not an easy process.

"But he just tells me to hang in there, hopefully get some first-team minutes soon, and then we'll find the best opportunity for me to get myself in the camp. So I'm just being patient. I'm not overthinking it. I'm just gonna keep working hard and wait to the opportunity to come, and then go out at full speed."

It's too early to see if Halbouni will be in Canada's squad in Qatar this November. That he's even in the discussion is key, especially given his developmental path.

But Halbouni's journey goes to show the need for Canadian footballers to have places to play at home. There are plenty of players out there like Halbouni, needing little else but an opportunity to shine.

(See Alistair Johnston of Vaughan Azzurri for how you snatch that opportunity, of course).

When the day comes and Halbouni goes out and represents his country as he dreams of doing, it'll be a big win for the ever-improving Canadian soccer pipeline, one that is continuing to grow at a rate never seen before.

It's an unprecedented time for the sport of the country, as we continue to see week-by-week. There's no reason why one can't dream big, as Halbouni has most certainly done these past few years.

"It's a very exciting time to be a Canadian player," Halbouni concluded. "It gives you more motivation to keep pushing day-by-day, game-by-game, year-by-year, and it's something that I'll never take for granted, because not a lot of people get this opportunity."