Inside the FCE rebuild: What does the future hold in Phonzie's hometown? 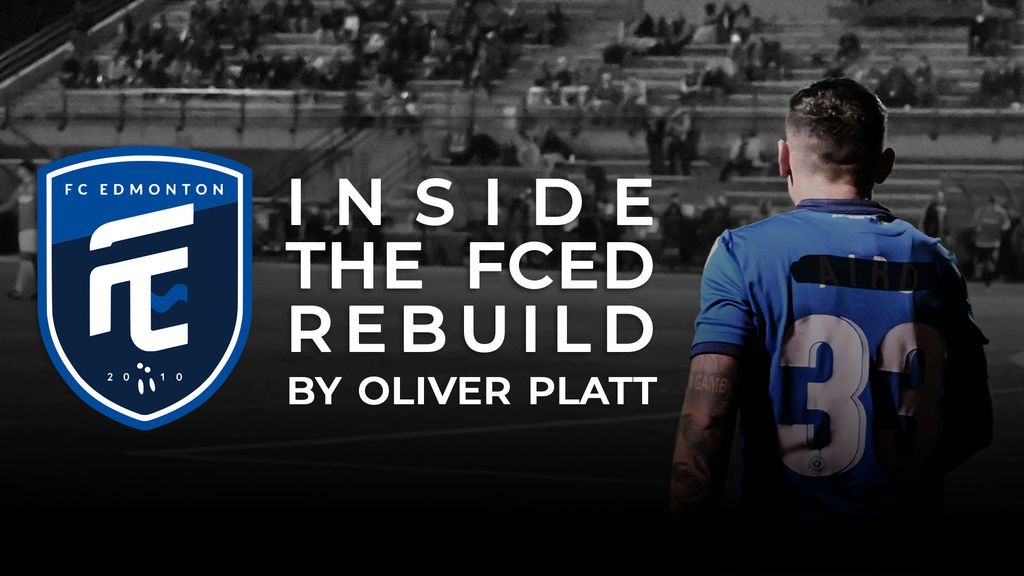 In November, the day after Canada had defeated Costa Rica in front of 48,806 people, FC Edmonton closed its 2021 Canadian Premier League season against defending champions Forge.

The Eddies won 1-0 on an Easton Ongaro goal.

But the lasting image of the afternoon was not Ongaro’s neat turn and finish. It was the announced attendance of just 564 at Clarke Stadium.

An imposing corner of Commonwealth Stadium, host of the World Cup qualifier the night before, looms above the Eddies’ home facility and it was hard not to draw a contrast between the two.

Plenty of the most die-hard soccer fans in the country were still in Edmonton, waiting for Canada’s second match against Mexico. But what had felt like an opportunity to draw a bumper crowd of those supporters turned into a spectacle few paid much attention to at all.

It has been evident for some time in Edmonton that something needs to change. And that day turned out to not only be the conclusion of the season but the end of an era.

On New Year’s Eve, the CPL announced that ownership of the team would be transferred from the Fath family, who had launched the club in 2010, to the league office while a new owner and new direction was sought out.

And when Edmonton opens its 2022 season in April, just two names on the roster — local youngsters Darlington Murasiranwa and T-Boy Fayia — will be returning from the previous campaign on permanent contracts.

The most significant rebuild in the CPL’s short history is about to begin.

In their mid-20s and with a decision to make about their long-term futures in professional soccer, goalkeeper Connor James and midfielder Allan Zebie elected to retire. After hitting double digits in goals for the second time, Ongaro was always likely to pursue a new challenge and has ended up in the top division in Romania.

But other exits have come as more unexpected setbacks. Amid the turbulence of an ownership change, star players such as Amer Didic and Fraser Aird have switched to other CPL teams in the west, joining Pacific and Cavalry, respectively.

Another key man, Tobias Warschewski, will be back in blue — but only as a loan signing from York United.

It has been a testing period for head coach Alan Koch and the small staff that remains at the club. But he has received support from the league’s soccer operations department and there has been a renewed sense of optimism this week as the team — in its admittedly limited current form — has returned to the training pitch and appointed a new president.

What is going on now sounds like it has the makings of a good Netflix series. Beyond the five players currently on the roster and a few more soon to be announced, FCE has several — mostly young and local — players in on trial. Others from around the country will soon be flying in on the same basis.

As a result, the club has taken on a new nickname: ‘FC Opportunity’.

There is no escaping that on paper, Edmonton will be everyone’s favourites to finish in last place. But in a strange way, this could be a roster that endears itself to supporters more than any of the three that have gone before it.

In Koch, the Eddies have a coach who could have walked away from this but chose to stay. He inherited a team in transition that unsurprisingly did not make the playoffs last season but was beaten by more than one goal in only two games out of 28. Edmonton went .500 (three wins, two draws, three losses) against finalists Forge and Pacific.

Koch's 2022 team will be youthful. It will be full of players desperate to take an opportunity they might not even have been expecting themselves. It will not be a team that is ever outworked.

For all the disadvantages they face, there is an opportunity there for FCE to connect with a city that values those qualities. They are going to need that support more than ever.

Issues off the pitch

New club president Jeff Harrop, formerly a senior executive at Oilers Entertainment Group in Edmonton, has been tasked with reversing the club’s decline off the pitch. Of the many items he — and any potential new owner — must address, two stand out.

The first is Clarke Stadium. It is a basic venue with few amenities, badly exposed when wind, rain, or snow hits, and located in an area of Edmonton that is not exactly buzzing with activity.

There is an interesting alternative in a much more central spot in the form of RE/MAX Field, a baseball stadium by design, and the ultimate dream would be to build a new facility. But both would require significant investment and for now, Clarke is home.

“Most definitely for 2022, our job is to really put on the best experience we can in that stadium,” Harrop told OneSoccer. “Moving forward (longer term), TBD.

“Every facility that you find yourself in has upsides and downsides and what you need to do is find creative solutions that maximize what it does well and fill the gaps of what it doesn’t.

“Do I think we can put a great experience on there? Absolutely. I think the sightlines are really strong, the logistics getting in and out… it has a lot going for it.

“Are there some things you’d like to add or change? Of course. But I’d say the same for any facility.”

The second major challenge for Harrop is to correct some of the mistakes the club has made on a more micro level, in its day-to-day interactions.

There is a feeling among some in the soccer community in Edmonton that the club has tended to ask for more from local clubs than it has given back and has lacked a strategy to bring key influencers into the fold. Canadian soccer can be a complex landscape to navigate and previous executives, while generally well-liked, have not had the background and contacts to successfully do so.

In past years, the Fath family could not have been accused of being unwilling to invest in marketing the club. But multiple sources suggested the money was not spent well — with wealthier suburban areas targeted over Edmonton's many immigrant communities — leading the Faths to lose faith.

An obvious move would be to try to build a relationship with Edmonton's own Alphonso Davies, who counts ex-Eddies players as childhood friends. But no source was aware of a serious attempt to do so.

“I can’t speak to the past,” Harrop said. “All I know is that there is a long list of priorities I have, and that (relationship with the soccer community) is at the very top.

“The way I’m going to approach it is to do more listening and reinforce to them that a big part of this role for me is that I want our organization to help grow the sport in Edmonton and Canada.

“On the flipside, working with them to bring visibility to our brand to people who love the game can help our franchise as well.

“There’s a natural synergy where we’re all trying to get to the same place.”

The potential is there

It is fantasy to expect a new league to hit a home run with every team and market in its early years.

What is interesting — and hopeful — about the situation in Edmonton is that no one regards it as anything approaching a write-off. Quite the opposite: there is a strong belief that few cities in Canada offer more potential to a professional club than the hometown of the country’s most famous soccer son, where tens of thousands of registered youth players dream of following in Davies' footsteps.

According to the CPL, there has been “significant interest” from both local and international groups in purchasing the team.

“You look at the momentum being generated through our women’s Olympic team, the men’s World Cup run, you look at what we’ve done by way of the CPL… I wouldn’t be in this seat if I didn’t think something was going to happen.”

There has been many ups and downs but over a decade after it was founded, FC Edmonton is still standing. And as it enters the most crucial period in its history yet, there is something to be said for that.