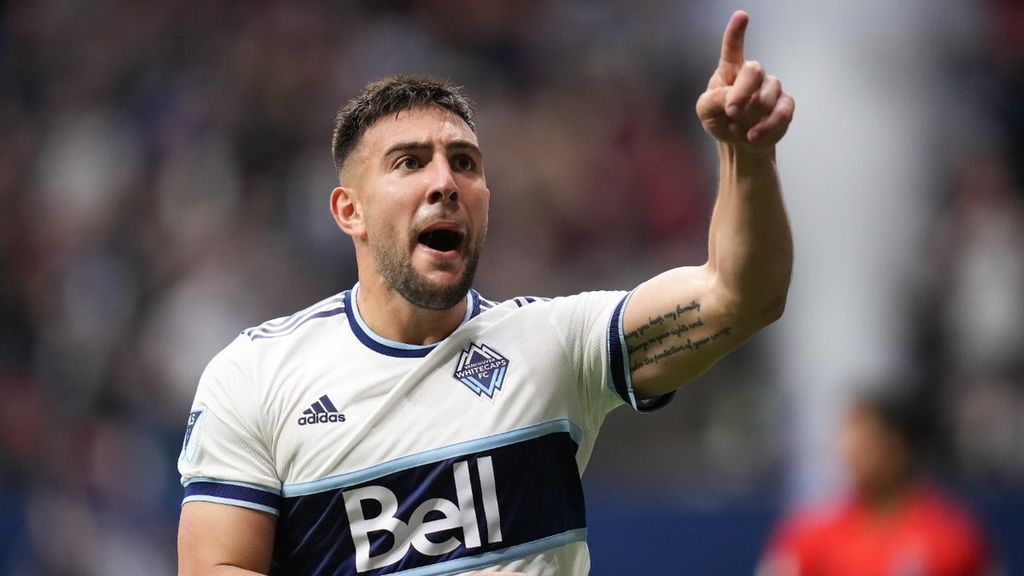 VANCOUVER – Might we be witnessing the resurgence of Lucas Cavallini?

At surface level, it might not seem like it, as the Vancouver Whitecaps striker has just three goals in 10 games so far in the 2022 MLS season... but don't be fooled; he's playing some of his best soccer in a Whitecaps jersey.

Lucas Cavallini puts @WhitecapsFC ahead from the spot in stoppage time! Another dramatic ending in Vancouver. pic.twitter.com/jXHt8quBFW

Jokes of his ability to rack up yellow cards aside (he has a whopping 19 yellows in 50 games for the Whitecaps), it looks like he's become a complete threat up top for Vancouver this year, combining strong hold-up play, good creativity and an ability to get open in the box into one fearsome package.

As a result, he's finally started to look like the club-record $5-million striker that Vancouver thought that they were bringing in when they signed 'El Tanque.'

And this recent run of form has also changed the outlook on Cavallini's future for club and for country at this crucial juncture.

With his Whitecaps contract up at the end of the season (though he does still have a contract option for 2023), and his once-assured CanMNT spot more in doubt than ever, keeping up this sort of form could be vital for his continued participation with both teams going forward.

On paper, three goals in 10 games isn't that noteworthy, right?

But it's worth looking deeper into the context of Cavallini's recent run of form – not quite a mirage, but indeed something worth building on. Considering that he's on a struggling Whitecaps team where any sort of bright light is a welcome salve, it's important to put his run in perspective compared to those around him.

Using FBRef, which has all sorts of in-depth statistics on MLS, you can really get a good idea of how he stacks up to his peers.

There, using their Scouting Report tool, (which takes all of a player's stats and compares them to other players at their position in their league), you can see how Cavallini compares to some of the other forwards in MLS.

So while there are some areas where there is some cause for concern, as he doesn't crack the top 50% in goals for, Expected Goals (xG) or shots on target percentage – all key stats for a striker – he's doing everything else quite well.

In fact, to get an idea of how well of an all-around threat he's been this season, consider this: Of all MLS strikers right now, FBRef's closest statistical comparable to Cavallini right now is New York City FC's Taty Castellanos, who won the MLS Golden Boot last season after nabbing 23 goals in all competitions, and already has 11 goals so far this season.

Not only that, but Castellanos is regarded as one of the top all-around strikers in MLS, too, as he supplements his goalscoring ability with great all-around play offensively and defensively.

So if anything, Cavallini has arguably been undersold in certain aspects of his play, especially in his playmaking.

Yes, his lack of goalscoring remains a worry, but with main Whitecaps creator Ryan Gauld having missed most of this season, his potential return could also lead to improvements there, too.

"He is working a lot for the team," Whitecaps head coach Vanni Sartini said of Cavallini this week. "And he's working a lot for himself, he has this bigger objective to go to work up with the national team, so he's doing everything correctly. And again, when you help the team, the team helps you and the team is helping also him (right now)."

Could this run save his Qatar hopes?

Of course, for all of his good form in MLS, Cavallini faces a much stiffer task at the National Team level, as he looks to keep his place on the CanMNT.

To be fair, he's firmly planted in a spot right now, having been included in most of Canada's run to the World Cup over the past year-and-a-half (when healthy).

But, despite the consistent show of faith by John Herdman and co., things have gotten rocky for him there as of late. With no goals in his last 11 appearances for Canada (despite having scored 16 in his first 20), he's no longer seen as the clutch Canadian goalscoring force he once was, potentially putting his spot at risk, especially as new scoring options emerge.

That can change, though. Yes, Cavallini hasn't been scoring consistently enough at the club level, making it hard to imagine that he'll suddenly find his scoring touch for Canada... but with the improvements that he's made to his all-around play, he could very well be an ace in the sleeve in Herdman's team as a super-sub, a role he's already filled quite admirably for Canada recently.

Really, that's the most important factor to consider; Cavallini's ability to be a wildcard, and Canada's need for such a player in a tournament setting later this year at the World Cup.

Cavallini has always been a streaky scorer, and tournaments? Well, they tend to reward those who can catch fire in short bursts.

As such, Cavallini is primed to be Canada's version of Lukas Podolski, James Rodriguez or Denis Cheryshev at this upcoming World Cup - the flash in the pan that finds way to make magic in a tournament setting, riding some hot form straight into the scribes of folklore.

Given Cavallini's history for both club and country, and the fact that he's always had a certain edge to his playing style, coupled with an ability to pop up with a big goal in a big game (calls of 'Cavalliniiiiiii' still echo around BMO Field from his goal against the US in 2019 for a reason), perhaps the big man in Vancouver is ready to be Canada's brightest-shining star come winter.

I mean, ask yourself: Would you really be surprised if it's Cavallini who scores Canada's first goal at a FIFA World Cup?