It feels hard to believe, but the possibility has become more real than ever, as the recent cancellation of the CanMNT’s upcoming Iran friendly has left them scrambling to find a replacement opponent.

As such, a tantalizing idea has emerged of a CPL all-star team squaring up against the national team – a suggestion that Pacific FC’s Marco Bustos certainly agrees with.

Look, obviously the CPL would have to postpone a few matches to make it happen, but who wouldn’t want to see Alphonso Davies up against Diyaeddine Abzi? Or Jonathan David battling with Karifa Yao?

So, let's assemble these All-Stars, shall we? 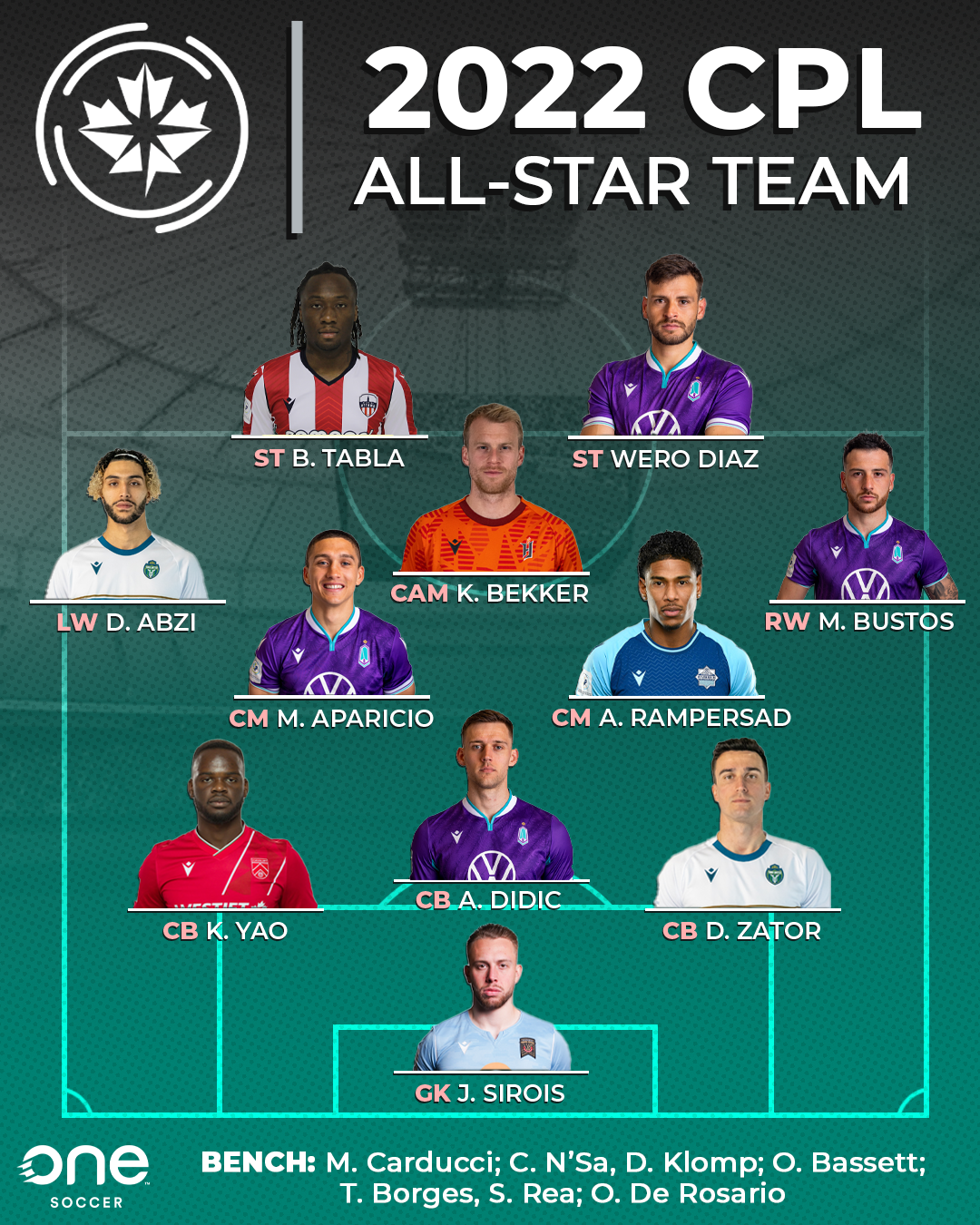 After winning the 2021 goalkeeper of the year award, the CF Montréal loanee, Sirois, has picked up where he left off last season, looking very much like that same man between the sticks. With just seven goals conceded in six games, having made 21 saves - including three out of three on penalties - it hasn’t been easy to beat him this year, making him an easy selection in goal.

So far this season, York has quickly surprised onlookers under new head coach, Martin Nash, becoming the best defensive team in the league, conceding just five goals in their first seven games. And leading the way in that push? The play of their centre back, Zator, who has played every minute, averaging 0.6 interceptions, 1.4 tackles, 4.3 clearances and 4.9 duels won (74% win percentage), while chipping in a goal at the other end, quietly emerging as a CPL best XI candidate.

A standout in his first three CPL seasons with FC Edmonton, Đidić hasn’t skipped a beat with his new club, Pacific, helping them sit atop the standings after eight games. Playing in seven of those games, he has been deadly at both ends, scoring a goal (and a further two goals in Canadian Championship action) and completing 91% of his passes, while averaging 1.3 interceptions, 0.8 tackles, 4.0 clearances and 2.0 duels won a game, highlighting his strong two-way play.

Despite being just 21 years of age, Yao has continued to look like a veteran for Cavalry, helping them stabilize after a solid start. A rock at the back, he’s played every minute across seven games for Cavalry, combining solid passing (and a strong eye for the long pass) with his ever-improving defensive game. That is evident in the numbers, which see him averaging 2.1 interceptions, 2.7 tackles, 1.7 clearances and 6.7 duels won per game, making him one of the most dominant at his position.

In the middle of the park, there haven’t been many better players this year than Rampersad, who has just quietly continued to boss the midfield for the Wanderers on most nights, yet to miss a minute for them in league play. An efficient two-way presence, he’s able to make things happen at both ends of the pitch, often breaking up opposing attacks before launching play forward on his own. And as seen by his defensive stats, where he’s averaging 2.0 interceptions, 1.7 tackles, and 7.4 duels won a game, along with his offensive stats, which include an 84% passing percentage and an average of a shot a game, he’s doing a good job of putting it all together, which is why he’s an easy shout here.

He might not be the name that steals headlines for Pacific, but make no mistake, Aparicio has been dominant for the Island side, quietly running the show in midfield on the defending champions. A two-way force, he’s had his fun offensively, nabbing two goals and one assist, as well as 1.3 shots and 1.0 key passes per game, but he’s also been putting in the work defensively, adding 0.8 interceptions, 1.9 tackles, and 5.5 duels won per game, making him a crucial force for the league leaders.

Despite Forge’s surprising start to the year, Bekker, as he has over his three prior seasons with the club, has been a bright light for the two-time champions. He might not have the production to show for it quite yet, sitting with just one assist in six games, but he’s still been making things happen offensively, averaging 1.3 shots, 1.7 key passes and 40 successful passes a game, showing his importance to Forge’s attack.

An arguable 2021 MVP candidate until an ankle injury derailed his season, Bustos has come out flying to start the season, finding himself with a league-leading four assists to help his team to their perch atop the table. Playing nearly every minute this season, he’s averaging an eye-popping 2.4 shots, 1.4 key passes and 2.1 dribbles, creating five (!) big chances in eight games. Not only that, but his hard work is leaving an impact defensively, too, adding 0.6 interceptions, 2.0 tackles and 5.9 duels won a game, showing great growth on that side of his game, making him an early MVP candidate.

Since the first day of the CPL, Abzi has consistently been one of the best full backs in the league, and that has continued into 2022, where he’s been a force down the left side for York. An offensive powerhouse, he hasn’t slowed down in that regard, chipping in one assist while averaging 1.9 shots, 1.7 key passes, and 1.9 dribbles, chipping in with two big chances. But the biggest improvement from Abzi? His defensive play, as he’s helped York’s big rise in that area of their game, averaging 0.6 interceptions, 2.9 tackles and 6.7 duels won per game, making him one of the best dual threats in the league.

Coming off of a breakthrough 2021 campaign, one where he nabbed 10 goals and four assists, Diaz has picked up where he left off last season, nabbing a league-leading five goals to go along with an assist. Dangerous in front of goal, he’s also remained crucial to the build-up for Pacific, comfortable at both leading the line and playing as more of a false nine, making him hard to defend. And that’s evident in his numbers, which see him averaging 2.3 shots and 0.9 key passes. Plus, of his five goals, he’s scored two with his right, two with his left and one with his head, showing why he’s one of the most rounded strikers in the league.

Heading into his first year in the CPL, no one quite knew what to expect from the former Barcelona man, who had wandered into the abyss of Canadian soccer the past few years. Yet, to everyone’s surprise, he’s been dominant, quickly proving to be an electric player for Ottawa. After trying a multitude of roles, he’s settled in as a striker, where he has one goal and two assists, which considering how many chances he’s helped generate, feels a bit low, if anything. Averaging 2.3 shots, 1.0 key passes and 1.6 dribbles per game, as well as three big chances, there haven’t been many more dangerous than Tabla, slotting him into this eleven.