BIG READ: Twice in a lifetime, a league will be born before our very (Canadian) eyes

"Some things happen only once, twice in a lifetime. The world is full of signs and wonders that come, and go, and if you are lucky you might be alive to see them," – Helen Macdonald.

I've had the enormous privilege of watching a soccer league come to life before my very eyes.

It is a rare sight in world football, to be sure. The sport we all grew up watching was built and born several decades or centuries before our time.

Canadians watched as the men's national team returned to the FIFA World Cup for the first time in 36 years, a few weeks after the Canadian Premier League wrapped up its fourth season with another exciting finale, this time in our nation's capital in Ottawa. Next up is the FIFA Women's World Cup in the summer of 2023, where the gold-medal-winning Canadian women's national team strive to climb their greatest mountain yet.

And we, the Canadian soccer community, approach the next great frontier, too.

This week, it was announced that former Canadian international Diana Matheson's Project 8 is spearheading the development of a women's professional league in Canada. Clubs like the Vancouver Whitecaps and Calgary Foothills are already locked in, and a target kick-off date of 2025 has been circled in on the calendar. The hype surrounding this newly-announced initiative is palpable.

Matheson, who made 206 appearances for Canada from 2003 to 2020, hung up her boots 18 months ago after a storied career and immediately began working toward helping grow the sport.

While she admits the "coaching bug never bit" her, Matheson's interest in the business of the sport saw her complete an executive MBA through the Smith School at Queens University, having earned a scholarship through a Canadian Olympic Committee initiative. At the same time, Matheson began taking UEFA academy programs, and those lessons combined and began to formulate a plan within her.

"Everything I was learning, it was through my lens of 'How are we going to build pro soccer in Canada for women?'," Matheson told OneSoccer (check out our roundtable video, above).

"You could apply everything, 'Oh, this is going to work, this wouldn't work.'

"The UEFA program was really, really great in terms of competition format – the main lesson there was that every league has to be built specific to the market in which you're building it.

"Canada requires a custom solution. The more I was working on it ... I had to look at all the alternatives that exist for us."

A custom solution for Canada requires overcoming the many challenges and obstacles standing between today and 2025.

Canada's vast geographical scope makes organizing competitions particularly costly. Accomodations, travel, and equipment alone can destroy budget proposals. While some competitions such as Major League Soccer have worked around this through limiting the scope of travel to geographical conferences of east and west, there are other solutions, such as strategic planning of a schedule to play multiple away games in close proximity to help alleviate some of those travel costs.

Then there are stadiums and training venues to consider; what can be repurposed, and where will investment into something new be required?

Matheson hasn't shied away from any of those hurdles. This is exactly where the "building" part of building a league comes into play. This is the fun part.

"We have to be realistic about our landscape," Matheson explained. "We have a lot of strengths, but we also have challenges. Obviously, geography is one that comes to mind. We had to address those things head on and build a plan that took those things into account as much as possible. You can't be naïve to the realities in your landscape. As much as we can, we've tried to name those things and come up with strategies to address them."

Once it's all in place, Matheson's next challenge will be in marketing and promoting a new league to an ever-growing population of soccer fans across the country.

"That will be built from scratch specifically for this league, with everything built around it as best you can to support women's professional soccer," Matheson offered. "That means the marketing, the brand positioning, the events strategy. Every person we hire and talk to is with the intent of building the best possible women's professional league.

"For this product, for this market, it needed to be a standalone project. It's got the legs to stand on by itself. It's about supporting it up the right way."

An independent project falls in line with what we've already seen in North America, with Major League Soccer (MLS) and the National Women's Soccer League (NWSL) operating as solo ventures, though with some overlap.

For instance, there are teams competing in the NWSL that are jointly-owned by an MLS counterpart, such as the Houston Dash and Houston Dynamo, and the Orlando Pride and Orlando City SC.

With the Whitecaps involved, it's clear there's room for collaboration here. Naturally, speculation about collaboration with the Canadian Premier League emerged right away among supporters.

The CPL put out a formal statement on Thursday outlining that they are "incredibly excited about the potential for women's professional soccer in Canada" and added that the league is "interested in any initiative that will help contribute to the growth of soccer in Canada." The CPL also clarified they are "currently reviewing all options in the women's professional space," while outlining the steps required to bring to fruition any such project.

Shortly afterward, Canada Soccer released their own statement, celebrating the initiative. Canada Soccer president Nick Bontis offered: "This is excellent news for our sport and Canada Soccer is in support of the proposal for the launch of a women’s professional league in Canada. We are always open and willing to work with individuals and organisations that want to further develop the women’s game, which is a vitally important part of Canada Soccer's Strategic Plan.

"This initiative is aligned with work we have already started and the launch of a women's professional league prior to the FIFA World Cup 2026 has always been one of my priorities as president."

"This is excellent news for our sport nationally and Canada Soccer is in support of the proposal for the launch of a women’s professional league in Canada." 🍁

It may be early days, but Matheson explains that there is a path to sustainability through this avenue, too.

"Around the world, one of the main ways the women's game has grown is partnering with big men's clubs or men's leagues," Matheson said. "That was obviously an alternative I looked at here, but given our landscape and given the newness of the CPL – I mean, Canada is a unique country – it made sense to do it similarly to the NWSL, in that it's an independent league."

As the building blocks are put into place over the coming months and years, there will be some key milestones to look forward to.

The name and branding of the league, the eight founding clubs, the first season schedule and league format, player signings – Matheson and Christine Sinclair made clear their intent to spearhead each club with at least one Canadian women's national team player – and many more moments, big and small, are on the way for an eager base of support.

Then there's the business side. The league must be sanctioned by Canada Soccer. Individual clubs must also apply and be accepted into membership of Canada Soccer, and satisfy its standards for professional league membership. Sponsors and broadcast deals and kit manufacturers and league offices and hires will all be celebrated, one step forward at a time.

When it's all done, and a ball is kicked at long last?

If you'll allow your residential content guru a moment to put on his old writing cap, I'd like to take you back to Hamilton, ON on April 17, 2019. 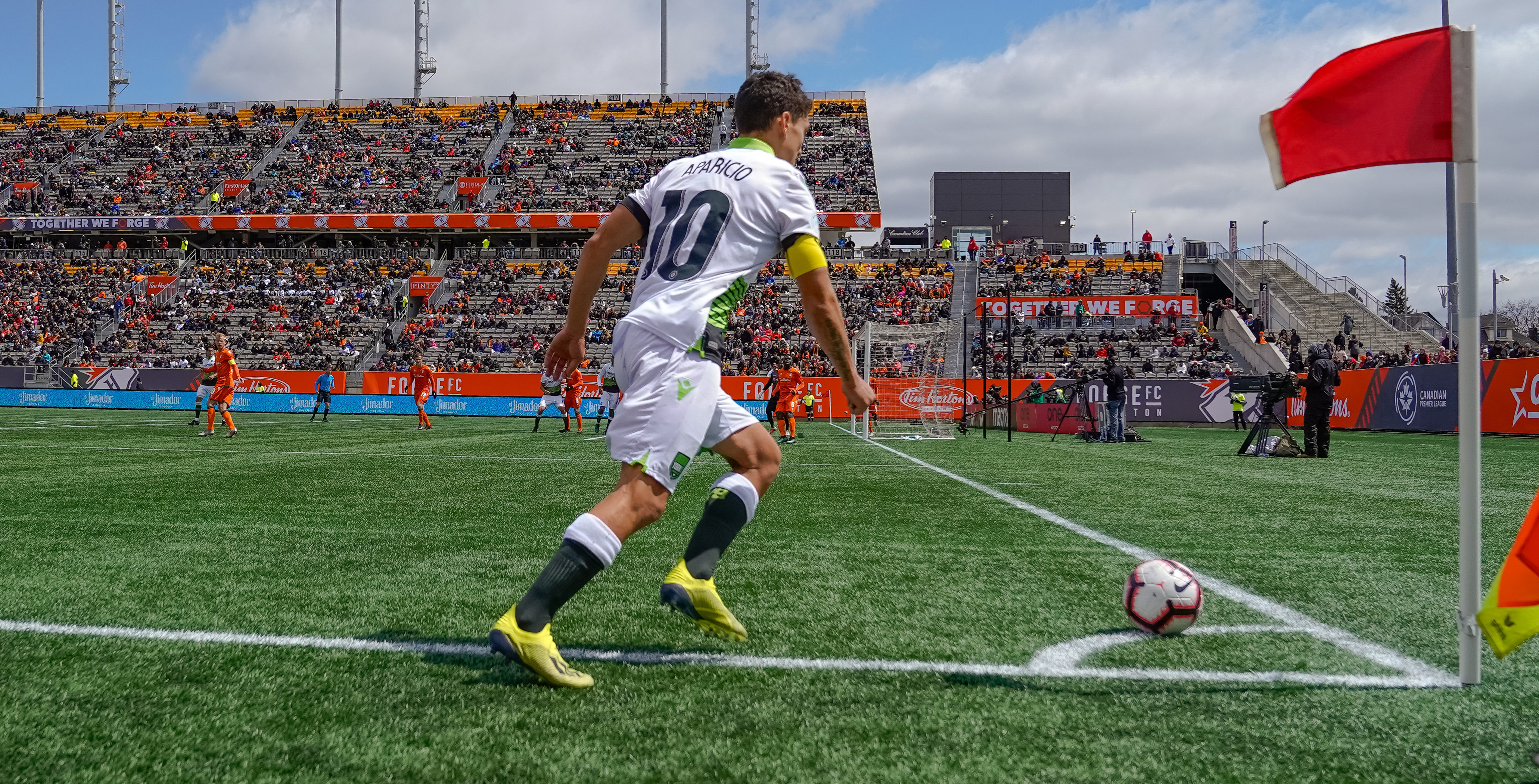 Tim Hortons Field is the venue. Forge FC and York United FC (then York9 FC) are about to kick off the very first match in Canadian Premier League history. A handful of CPL's staffers are in a frenzy up in the working areas and media rooms. Did we forget to do this?? or What about that?? rings around us humble scribes. A graphic designer is frantically cutting images to share for socials. Marketers are taking phone calls with both hands. Chaos. Beautiful chaos.

Still, it all went off without a hitch. But those nerves ... there's absolutely nothing like that first kick. Years of work (and believe me, it is absolutely work) all come together for this one moment.

That first whistle was euphoria, even if you're up to your neck in last-second tasks and you've gotta remind yourself to breath and be present in that moment, to soak it in.

That first goal gave first-kiss butterflies. That final whistle was a form of relief your neck and shoulders have been dying to feel for months. Trust me on this.

But nothing good has ever come without sacrifice. You pour every ounce of yourself into something because you believe it's worth it. The act of keeping that fire alive is where your fate lies.

That's the journey we went through in the days and weeks and months and years before April 17, 2019. And only then did our real work begin.

Diana Matheson has helped begin that journey for women's soccer in this country. Twice in a lifetime now, our soccer community gets to work to build another professional league in Canada. And make no mistake; it will take a community to get there.

To those who embark with her on this journey? Enjoy each and every moment, big and small, on the road to this new moment.

Truly (and even if it doesn't feel like it every single day), we live in great times for the sport in this country.