Analyzing Jonathan David's hot start to 22-23 Ligue 1 campaign, and what it means for Lille, CanMNT 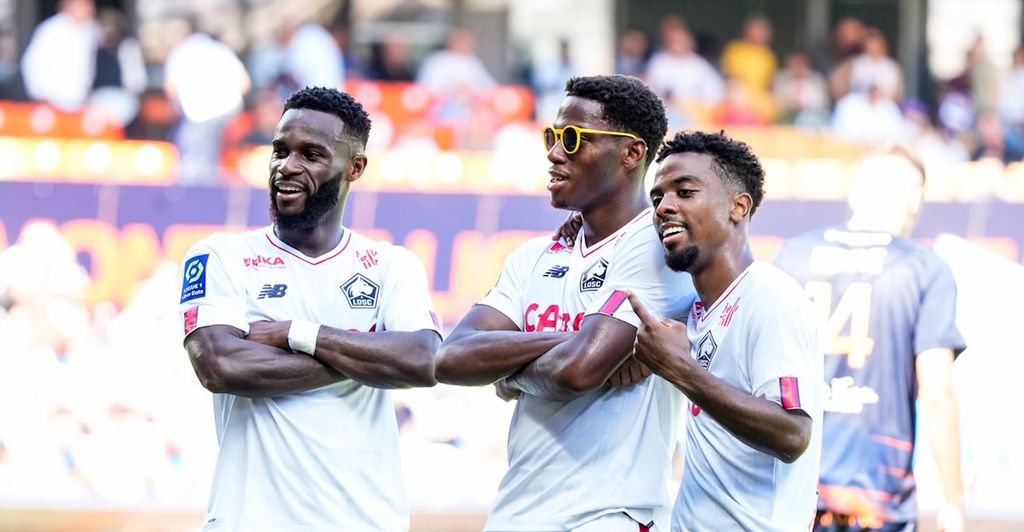 Jonathan David continued a strong start to the 22-23 Ligue 1 season this past weekend.

Thanks to a pair of goals in a win over Montpellier, he has now climbed into the top five of Ligue 1’s Golden Boot race, currently sitting with four goals through six games.

Along with two assists, it’s been a solid run for the CanMNT forward, who is averaging a goal contribution a game, helping Lille jump into the top five in the league (as of writing) off the back of that production.

At the same time, while there is a lot to be excited about with those stats, there are some things worth noting with David’s strong start.

First, there’s the fact that all four of his goals came across two games, meaning that in the four other games that David played, he blanked, even missing a penalty in one of those four matches.

Secondly, he’s bounced around the Lille lineup, first starting the year as a sort of inside forward, before shifting to more of an out-and-out striker role in recent games, making it harder to find the consistency that most attacking players might’ve liked at this stage of the campaign.

Because of that, it’s been hard to track David’s start. While he’s been productive and overall a bright light, there’s a feeling that Lille could be getting even more out of him, allowing him to rack up goal contributions on a more consistent basis.

Seeing that, here’s a look at what can be taken away from David’s start, and what it says about where he should be deployed as coach Paulo Fonseca continues to tweak and adjust his team going forward.

Jonathan David applies his "Ice-man" cool to score AGAIN and give #LOSC a 3-0 lead over Auxerre! 🥶#Ligue1 | 🔴 https://t.co/7JFAUhgjL6 pic.twitter.com/8z23nGhyZG

What to gleam from strong start?

To begin, there’s no better thing to do than to see what can be gleaned from the games that David scored in, versus the ones that he didn’t.

There, if you split the games up into two - games in which he had a goal or an assist, and games that he didn’t - a few trends become clear.

First, there were the games in which he had a goal contribution, which were against AJ Auxerre, FC Nantes and now Montpellier. There, he first played in that sort of inside forward role against Auxerre and Nantes, before leading the line against Montpellier.

And in those games, what stood out is that David seemed to get into more dangerous situations in the box, racking up 2.22 Expected Goals (xG) and 0.55 Expected Assists (xA) in those games, compared to 1.61 xG and 0.15 xA in the games in which he blanked against PSG, Ajaccio and Nice (with about 0.7 xG of that being the penalty he missed against Ajaccio). 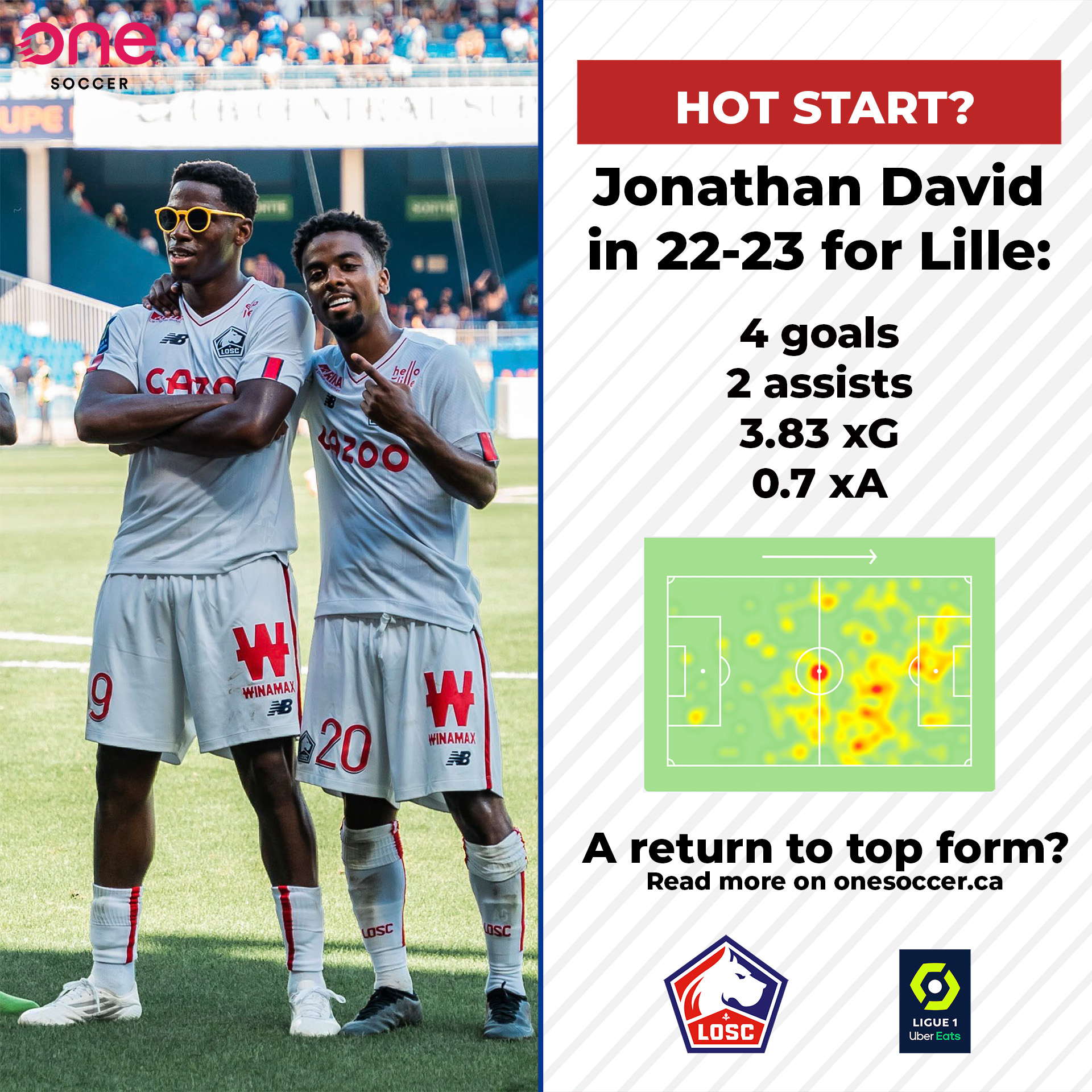 Of course, that makes sense - the more chances you generate, the more goal contributions you rack up, so what’s leading to that?

There, it’s a bit harder to say, as metrics such as his numbers of shots, or touches, really vary from game to game across the season as a whole.

Instead, what’s worth noting is a few things about David’s game, which is uniquely complex given his ability to interpret space and his attention to the sort of details that most forwards don’t technically focus on.

As a result, it’s also important to note that he’s not a traditional #9, at least not in the sense where he’ll back down defenders and try to poach. He is a very strong finisher (as 93 goals in 215 games for club and country shows), but he likes to get involved in the build-up and play almost like a #10.

Because of that, he’s been one of the best forwards in Europe over the last 365 days (per FBRef) at shots per goal, passes completed, passes into the final third and dribbles, sitting in the top 25% or higher at all of those stats.

What that shows is that he’ll be lethal in the box, if needed (hence the high shots per goal ratio), but he’s also at his best when he also participates in the build-up, as reflected in his ability to dribble and pass the ball forward.

Therefore, to get the most out of David, it’s important that he can combine those skills. That was the case as an inside forward against Auxerre and Nantes (games where he had a free role since Lille had a natural #9 on the pitch), or leading the line against Montpellier, where he had a free role since his team had so much possession (76% of the ball).

Where he might struggle, however, is in games where he leads the line but might be stuck having to be isolated up front, such as his game against PSG, where Lille held less of the ball and needed an outlet, instead of a creative hub.

It’s no coincidence that some of his best runs of form with club and country over the past few years has been when he’s had a strike partner, or is given a bit more of a free role, and that’s manifesting itself once again this season.

How should Lille adjust?

Because of that, it’s important that Lille now figures out how to ensure that he is in those positions more often, allowing him to find some consistent scoring form.

And there will be Fonseca’s big task as manager.

Ideally, having David play off of a #9 seems the ideal solution, but with Lille’s best option there being Mohamed Bayo, who has been good but has dealt with disciplinary issues, it remains to see if he’ll be a consistent solution for Fonseca to rely on.

Either way, seeing the success that David had with Burak Yilmaz back in 2020/2021, and last year when he was usually paired with one of Yusuf Yazici or Timothy Weah, that’d be a good formula for them to follow, be it with Bayo or someone else. 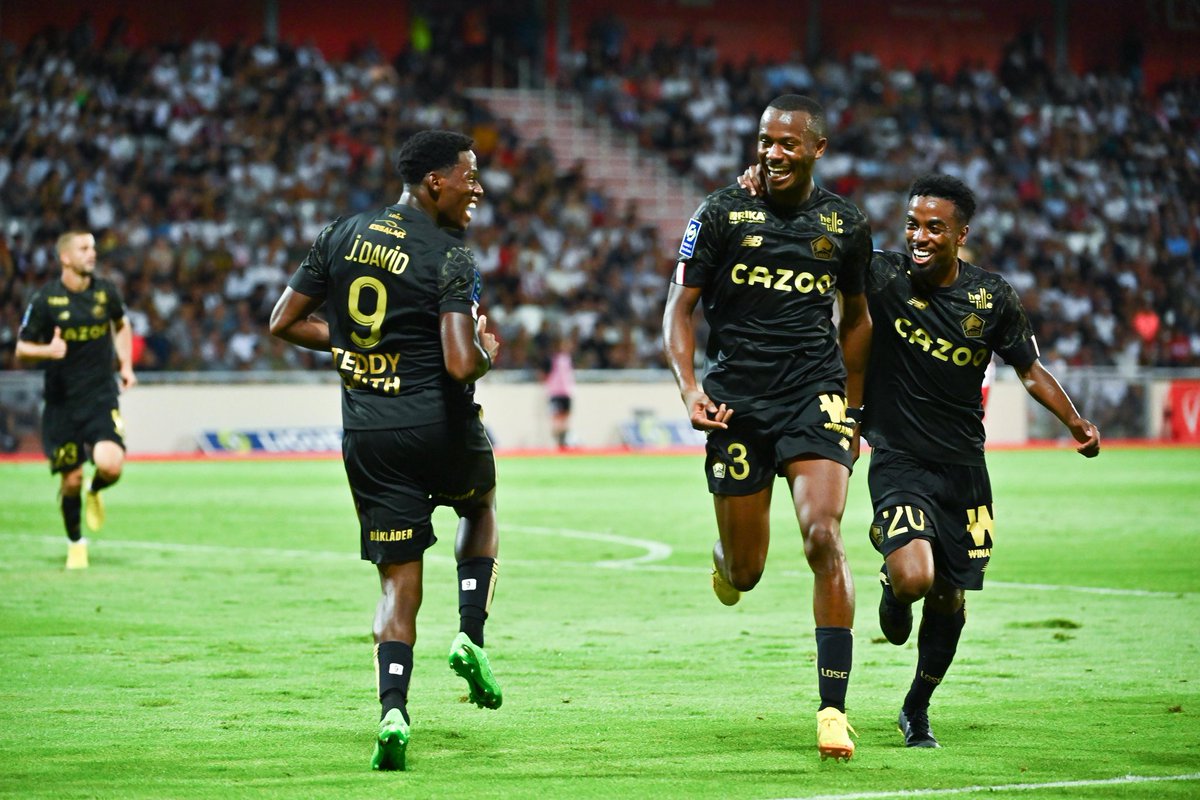 Otherwise, if not, allowing David a free role as a #9 could be the way to go in games where Bayo isn’t seen as good to go, knowing that you might lack the physical threat of a true #9, but will still have the creativity that David provides in deep areas.

Of course, they’ll have to ensure that he doesn’t get isolated, allowing him to participate in the build-up play, but given their ability to hold possession (Lille sits 2nd in the league in that stat), no reason why they can’t do that, either.

If they can strike that balance, that’d be key, making it something for Fonseca to focus on.

What does that mean for Canada?

Speaking of Fonseca, if he wants an idea of what that looks like, David’s play for the CanMNT over the past year has certainly provided a template, too, giving him an idea of what David’s best role is.

There, after struggling through a bit of a slump at the end of 2021, where he had a run where he scored just once and added one assist in seven games, he’s scored five goals and added four assists in the 11 games since, becoming one of Canada’s most important offensive players once again.

The big tweak? His adjustment to playing with Cyle Larin up front as a duo, a move that especially helped Canada when they lost Alphonso Davies for the last six games of World Cup qualifiers. 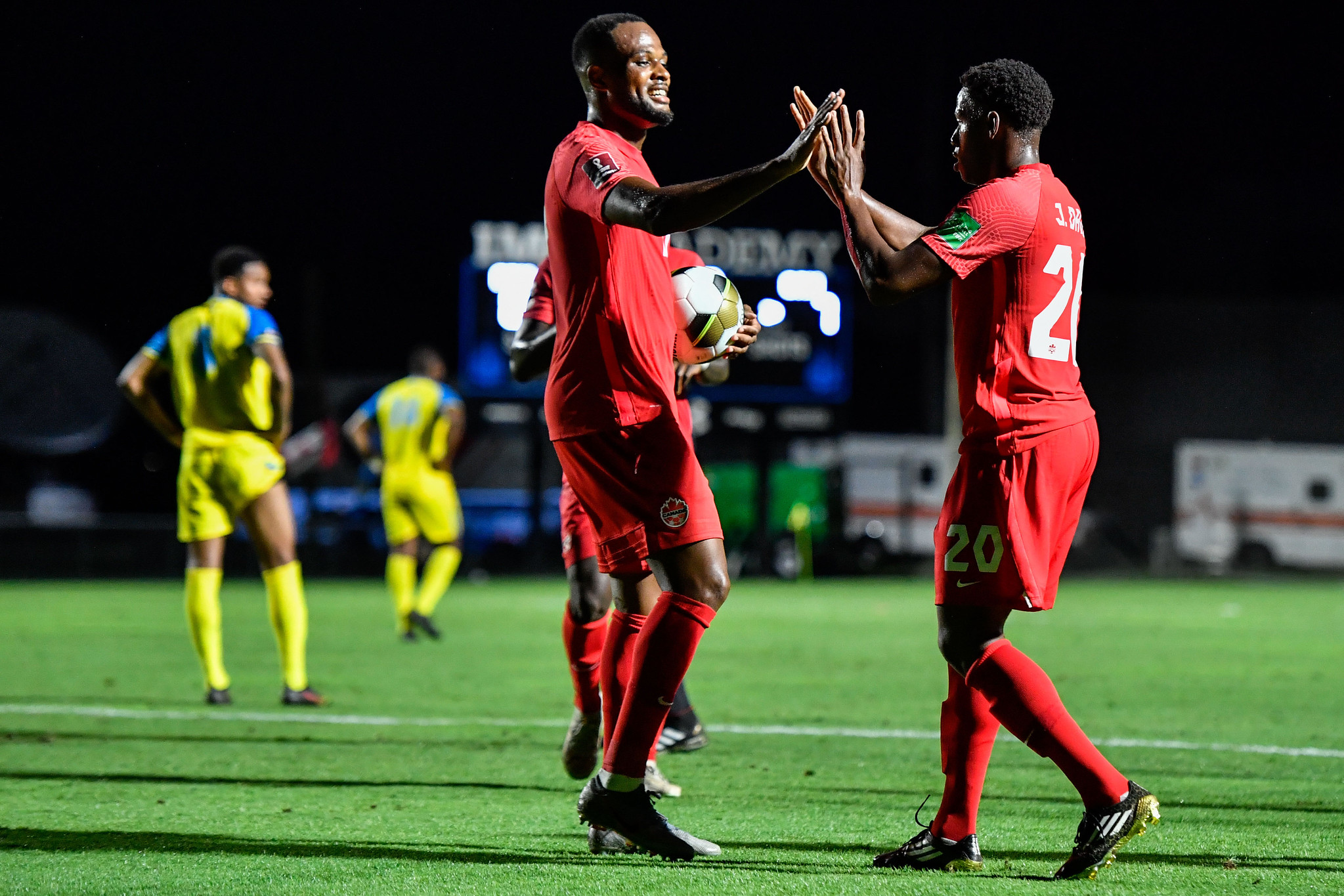 Through that, it helped them ensure that they’d get over the line in terms of getting to Qatar, while providing an attacking template for the team to use going forward.

Because of that, it’s expected that Canada continues to use David up front in a partnership, either with Larin or with Iké Ugbo (if Larin continues to struggle for minutes at Club Brugge), building off of that template.

Which for Lille, is a template they’ll now look to either adopt or tweak, helping David build off this bright start to his third Ligue 1 campaign with the team, one that they’ll hope can turn into a good run towards the title after a tough 21-22, returning to the form they displayed back in 20-21.

You can catch Lille in action LIVE on OneSoccer on Saturday, September 10th versus Marseille (3:00 p.m. ET).