As Alistair Johnston's offensive prowess grows in Montreal, what does Canada future hold?

Alistair Johnston has continued to turn heads for CF Montréal this season.

Much as he did over the course of the CanMNT's magical World Cup qualifying run over the past year, the former Nashville SC player has seemingly found another level with his new club again this season, stepping up big time for the Montréal-based side in MLS play.

With the club currently sitting second in the Eastern Conference, and third in the overall MLS standings, their spot in the 2022 MLS Playoffs has now been secured. There haven't been many teams better this year than Montréal, and Johnston's play has been a big reason for that.

Despite playing in a bit of a different role than what some expected him to play when he was first traded to the team, he's continued to find a way to shine in games, excelling as a wing-back under head coach Wilfried Nancy's tutelage.

His leadership and ability means Johnston is expected to play a big role for Canada in Qatar at the FIFA World Cup, and for good reason; the question is whether he'll be doing so as an attack-minded wing-back, or as the stoic centre-back we first knew him as.

New role pays off for Montréal

It's not that surprising to see Johnston thrive at Montréal. While the $1 million dollars in GAM that Montreal paid to Nashville in order to acquire his services this offseason was steep, it was also regarded as a smart bet on a player that had quickly grown in his first two MLS seasons.

The surprise, however, was his insertion into a new role with his new team.

Most often deployed deeper on the pitch for Nashville, where he either played right back in a back four (as he did 12 times in 2021), as a right-sided centre back in a back three/five (as he did four times), or as a right wing back but in a more conservative back five (as he did 10 times), most expected him to play some sort of defensive role for Montréal. Especially given that he also mostly played as a centre back for Canada, sometimes shifting to a right back position, that seemed to further apply that idea.

Because of that, when he arrived at Montréal, it seemed like a no-brainer move for him to be deployed as a right-sided centre back in their usual back three, joining fellow Canadians Joel Waterman and Kamal Miller in that formation.

But, someone didn't give Nancy that memo, as he instead decided to insert Johnston as the right wing-back in his 3-4-2-1 formation, to great effect. Unlike the right-back role in Nashville's formation, this was a job tasked with significantly more offensive responsibility, meaning that Johnston was going to have to go box-to-box instead of sitting a bit deeper on the pitch.

Instead of playing a little more cautiously as he tended to with Nashville, Johnston was also asked to play like a true wing-back, one that was to be heavily involved in the way Montréal plays.

Which, to give credit to both Nancy and Johnston, turned out to be a move that has paid off massively for both Johnston and his team.

Of course, there's been Montréal's success this season, of which Johnston and his 2700+ minutes (good for second on the team as of writing) have been a big part of, but there's also Johnston's individual success, too, as he's indeed managed to become a key offensive contributor without sacrificing the defensive approach that he's known for.'

As a result, he now sits with four goals and four assists in 35 games on the season (all competitions), a big increase on the one goal and one assist he managed in 49 games for Nashville, total (all competitions), playing a role in Montréal having a top-five offence in MLS.

Alistair Johnston with the Darby goal 🍁

It's a day for 🇨🇦 goals in the 🇨🇦 Classique, as Alistair Johnston has now gotten in on the action, too

Looking more like a #9 here, he nabs his 3rd goal of the year to go along with his 4 assists. Not bad#CanMNTpic.twitter.com/vOsafcuiro

Along with the role he's played in Montréal allowing the second-fewest Expected Goals (xG) against in all of MLS this season, helping them become a strong defensive team (don't be fooled by their goals against, which came down to some early and mid-season goalkeeping struggles), Johnston has made his impact felt at both ends.

And his numbers mostly back up that idea too.

When taking a look at his 2022 statistics on FBRef, which takes his stats (on a per 90 minutes basis) and compares him to his positional peers, there haven't been many at full back (as defined on FBRef) than Johnston in 2022.

His defensive metrics have fallen off a bit individually, however, but that's also the cost of Johnston playing higher up the pitch. Given the fact that he was in the 68th percentile in tackles and 73rd percentile in pressures in 2021 (now 29th and 67th), and of course Montréal's 2022 defensive record, that baseline should still be there.

Either way, given the level of offensive growth that he's shone, you'd take that at the bit of a cost of defence, knowing that when it comes to fitness and 1v1 defending, there aren't many better than Johnston, which can make up for those statistical drop-offs in other ways.

Just ask Montréal, who are certainly reaping the rewards right now, as the standings show.

What does new level mean for Canada?

In seeing how good he's been for Montréal in that position, that now begs the question - where will he be deployed for the CanMNT?

Right now, that's a bit of a million-dollar question. While his play higher up the pitch suggests it might be worth deploying him there for Canada, their wealth of talent at either wing, and more specifically at wing back, makes it hard to imagine that happening. 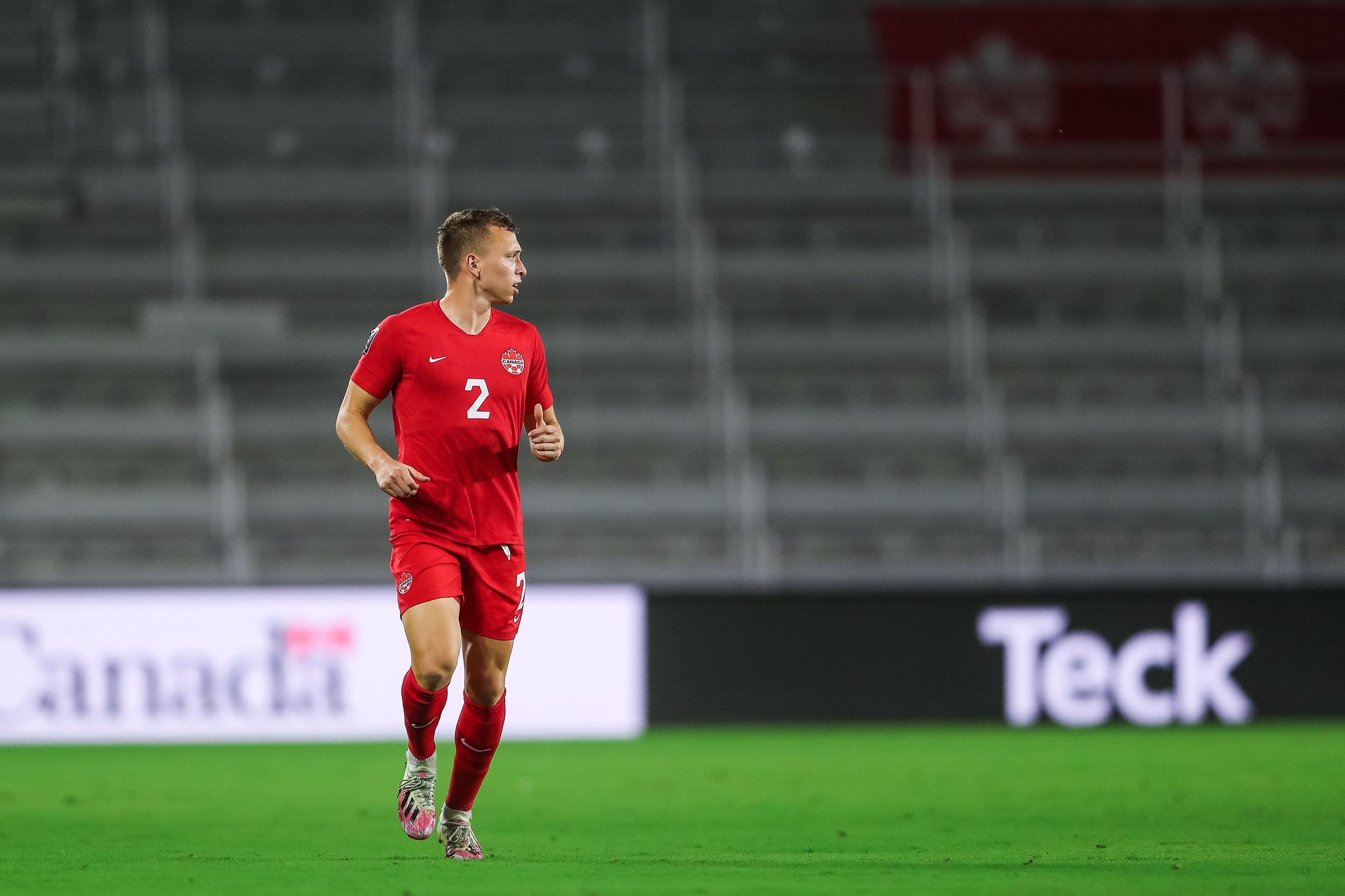 When it comes to providing offence in wide areas, John Herdman is likely going to turn to Alphonso Davies, Tajon Buchanan, Sam Adekugbe and likely Richie Laryea first, though that's not a slight on Johnston - that's just the sort of quality that's there for Herdman to choose from at this time.

Plus, given his importance to Canada's defensive record during World Cup qualifying in which he played 19 out of a possible 20 games, (helping Canada concede just eight goals across those games), Herdman will probably want him deeper on the field, anyway. None of the other options listed can offer coverage at RCB like Johnston can.

Therefore, while his improved offensive play might make it tempting to push him into a similar out-and-out wing back role for Canada, the combination of Canada both having a lot of talent for that position and needing Johnston further back will likely cancel that out.

What this will probably change, however, is his ability to participate in Canada's build-up.

Before, for Canada, his role was to play deeper as a right-sided centre back in a back three in possession, before dropping back into a right back role in a 4-4-2 off the ball, avoiding pushing up the field too often. As a result, his biggest involvement offensively for Canada was to progress the ball forward via passes, both short and long, meaning that he hardly drifted into the final third.

Now, while his deployment likely won't change, however, look for Johnston to progress the ball forward more via his dribbling, while also making himself available to cross the ball, making more surges to the final third. Especially if Atiba Hutchinson is on the pitch (he can drop between the two centre backs if needed), or Sam Adekugbe (who much like Johnston can on the right, is also comfortable dropping back into the left side of the back three in possession), he could be given the green light to push forward more in possession.

Through that, it could provide another dimension to Canada's attack, while giving them a bit more balance in possession. Not only would that help make Canada more press resistant, but Johnston's ability to get up and whip in an early cross could be beneficial for strikers Cyle Larin and Iké Ugbo, who are good at getting on the end of those sorts of balls.

Along with the solidity that Johnston will be expected to continue and bring defensively, especially in transition, that will be big, giving Canada a bit of a new look, which is not a bad thing for a team that is so tactically versatile.

Watching back last night's game, how important was this early tackle/block from Alistair Johnston?

With 1 of CONCACAFs most in-form players barrelling down, and 2 wide-open players at the back post, this is a game-changing play early on#CanMNTpic.twitter.com/Q6flE90tO9

What's next for Johnston?

Speaking of a new look, this just feels like the start of what Johnston will be able to become as a player, as it feels like his development as a player is far from over.

Just seeing him talk about the game shows that he's a student of the sport, one who likes to study the ins and outs just to give himself an edge. The fact that he's excelled in MLS and with Canada at three positions he hardly played in college (where he was mostly used as a midfielder) makes one wonder if there could be any more positions he could play.

Therefore, don't be surprised to see him try some new positions over the next few years, such as back in his familiar midfield position. Especially with Canada continuing to develop full backs at an impressive rate, while slowly continuing to shore up their centre back depth, he could be tasked to help Canada get more depth in the middle of the park, for example.

Either way, one thing is sure - Johnston is going to keep growing and progressing, no matter the position, and will continue to play a big role for Canada going forward, making it exciting to imagine what his future could hold - for both club and country.