3 things we learned about the CanWNT in April window 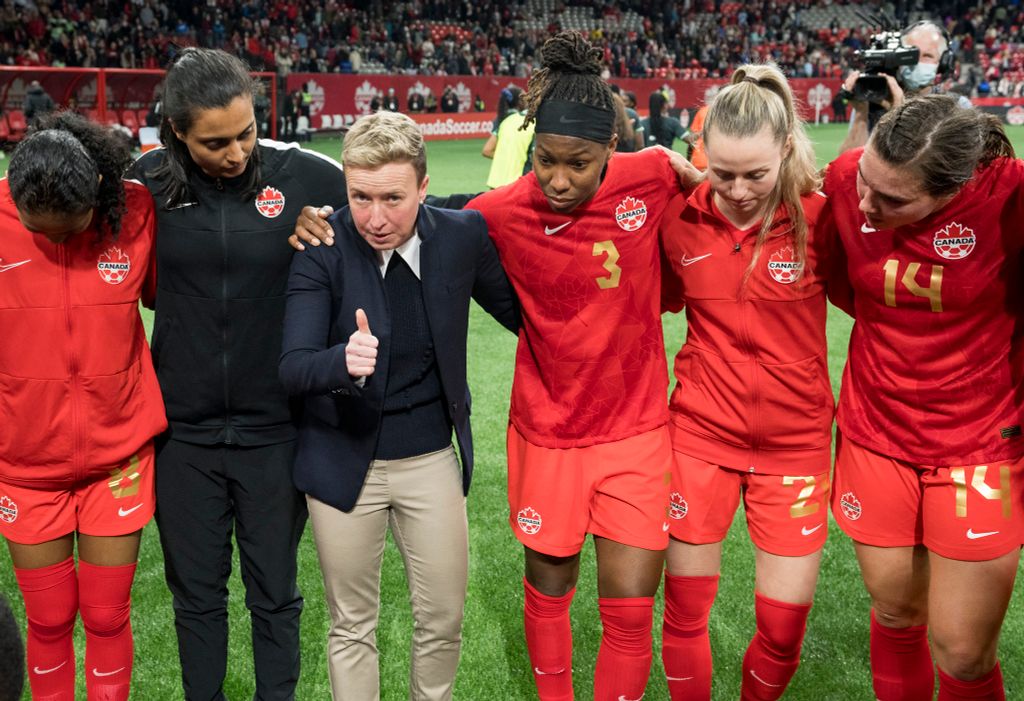 TORONTO – It was a camp of celebration, entertaining soccer, and positive vibes for the Canadian women's national team.

In retrospect, it was a solid window to learn some valuable lessons against a tough opponent in Nigeria, too.

Officially billed as part of the team’s Olympic gold "Celebration Tour," these two friendlies were more a chance to gauge progress and try out new ideas as Canada progress toward the 2023 World Cup qualifiers, kicking off this July at the CONCACAF W Championships.

Ahead of what is expected to be a massive World Cup for this team – Canada will certainly enter the tournament as one of the favourites to win due to their Olympic triumph – Bev Priestman's squad will leave the Canadian west coast with some important notes to reflect upon, a consequence of mixed results on the pitch.

And as spectators? Here are 3 things we learned about Canada this month:

They might not have shared the pitch yet at the club level, but Christine Sinclair and Janine Beckie are already looking like they could do some damage as a tandem this year for the Portland Thorns in the NWSL.

Fresh off a big transfer to Portland from Manchester City, Beckie looked rejuvenated in this camp, playing some of her best soccer in a Canadian shirt of late.

Despite hardly playing much club football in recent months while on the City bench, Beckie didn't look a touch out of her element, nor did she want for match fitness.

As such, it looks like she'll be able to link up quite nicely with Sinclair, herself revered at the club for the last decade.

With Sinclair’s ability to create from deeper positions on the field, and Beckie’s awareness of space down the channel, the two combined nicely on several occasions when they were on the pitch together against Nigeria, showing great chemistry.

For those efforts, the two emerged as Canada’s most important contributors in this camp; Sinclair finished with a goal and a secondary assist, while Beckie had both a primary and secondary assist of her own.

They might not have linked up on any goals quite yet, but came close on several occasions, too:

Janine Beckie --> Christine Sinclair, nearly ends up in the back of the net

There’s a reason why, since the 2015 World Cup, the top two scorers on this Canadian team have been Sinclair (34 goals) and Beckie (33).

So, let's see what happens when they finally link up on the Thorns, where they’ve been brought together under the ‘Portl-anada’ movement alongisde former Canadian legends in their head coach Rhian Wilkinson and GM Karina LeBlanc. Good form for club could prove valuable when Canada begins their World Cup Qualifying process this summer.

For a team who scored four goals in two games, it feels off to suggest that Canada could’ve done even better in the offensive department against Nigeria.

Yet, here we are. Despite creating a plethora of chances across both games – generating an impressive 43 shots, 23 of them on target – this Canadian team just couldn’t enough goals.

Credit does have to go to Nigeria, to be fair, as the Super Eagles did well to keep Canada out of dangerous areas in games, and saw some heroic performances from goalkeepers Chiamaka Nnadozie and Tochukwu Oluehi.

But at the same time, Canada will feel like they were left begging.

From hitting the woodwork a couple of times in both matches, to a couple of wasted chances in the box, it just feels like Canada's luck had run dry at times, doing everything but putting the ball in the net.

Ahead of the World Cup Qualifying cycle? That’s a bit of a worry.

Considering that they scored just four goals in four games at the 2019 World Cup, and six goals in six games at the 2021 Olympics, this has been a problem for Canada for a while now.

It’ll be easy to point at the latest Olympics and suggest that wouldn’t be an issue for them then, especially given that they won ... but, they did have to defend quite well in all of their games in Tokyo, before being extremely ruthless at the other end, which is a strategy that has a high margin for error.

Not to mention Canada rode a whole lot of penalty shootout luck to gold, too.

The good news, however? Unlike before, Canada is generating chances now, which they weren’t doing before.

The next step is turning those chances into goals, of course.

There is still plenty of time for Bev Priestman to sort out the finishing side of their game; given the positive steps taken in this camp, Canada appears to be on the right track.

Roster Questions abound ahead of July

It's not an enviable job, whittling down her squad to the 23 or so players typical for both World Cup qualifiers and a tournament proper.

Considering that Priestman called in 29 players for this latest camp, there will inevitably be some tough roster decisions to make over the next few months.

Luckily for her, Priestman still has one camp to evaluate and make those decisions, as Canada will reconvene in June for two friendlies before the Concacaf W Championship kicks off soon after.

But after this camp? That's a task that hasn't gotten any easier.

Ahead of WCQs, who are your locks for the #CanWNT/#CanXNT on a 23-player roster?

I think mine are:

Yes, there are several locks for Canada, which certainly helps; there remains a core group of around 18 names that you’d expect down in Monterrey.

But after that? It’s wide-open at a lot of positions, leaving Priestman with all sorts of questions to answer.

From a logjam up front, to the depth of names in midfield, and all sorts of questions at both full-back and in goal, there are great battles brewing across the field (at least other than at centre back, where Canada’s group is quite set).

Part of the reason Canada did so well at the Olympics was due to Priestman’s ability to pick a blended roster of experienced veterans and rising youngsters.

She’ll need to strike a similar balance this time around, too. 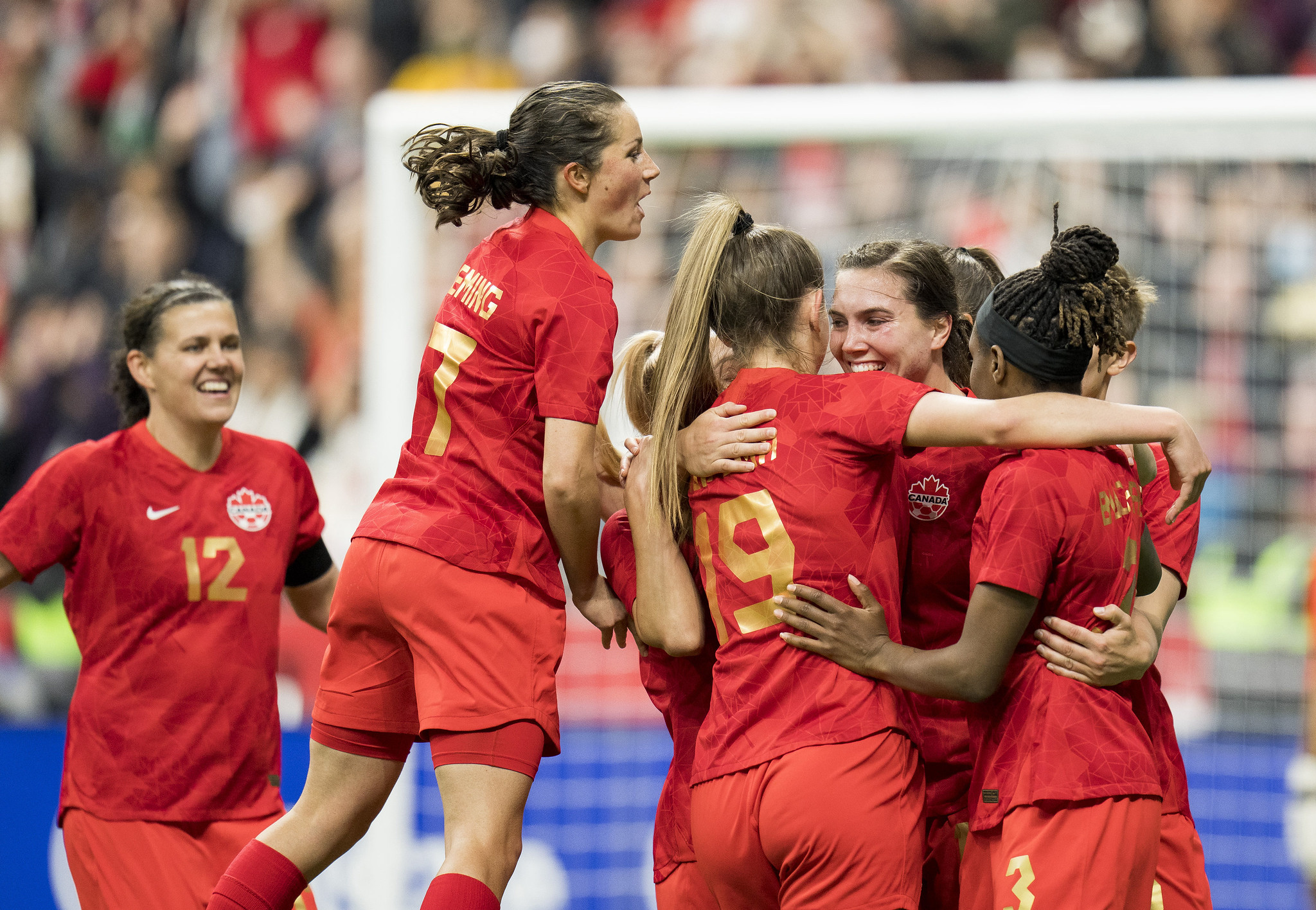