The 2022 Canadian Premier League Awards took place on Friday evening ahead of Sunday's FINAL in Ottawa, with 7 individual accolades revealed and celebrated to close out another fantastic regular season of Canadian club soccer action.

Here are the winners, as voted by CPL staff, select members of media including those at OneSoccer, and fellow coaches and players.

Ollie Bassett – Player of the Year 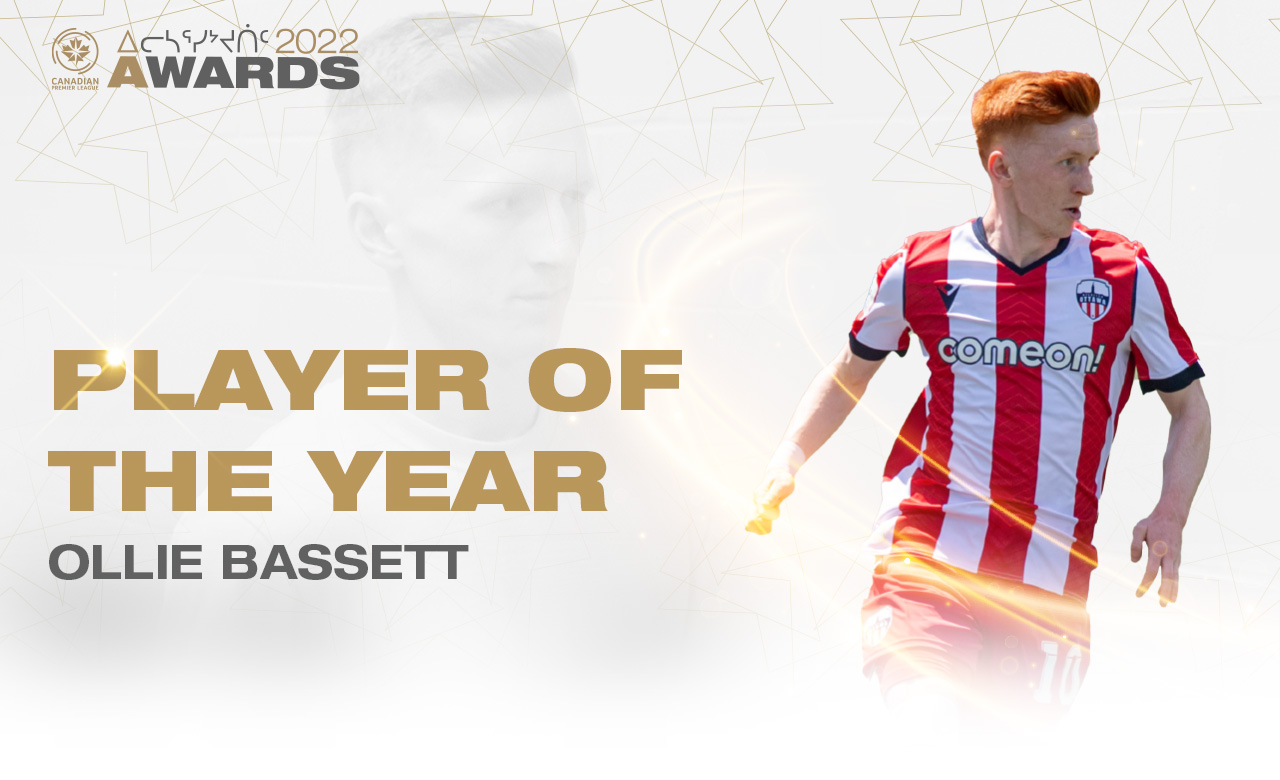 Atlético Ottawa midfielder Ollie Bassett has been named the 2022 Player of the Year.

Bassett, 24, accepted the award in a ceremony at Ottawa’s TD Place on Friday as part of the CPL’s awards night prior to Sunday evening’s playoff Final between Atlético Ottawa and Forge FC.

The native of Packington, England started 27 out of 28 regular season matches for Ottawa in 2022, leading his club with eight goals and providing two assists as well. Bassett signed in the nation’s capital prior to this season after playing his first year in Canada with Pacific FC in 2021.

Upon joining Atleti, Bassett became immediately integral to the side, playing a vital role as a box-to-box central midfielder throughout Ottawa’s run to the regular season championship. He led the CPL this year with 138 entries into the penalty area, created 42 chances (third in the league), and he finished with a stellar 83.15 per cent pass accuracy.

"I want to thank my parents back in the UK, they stay up late nights watching the games,” said Bassett. “So yeah I want to thank my family and my girlfriend for all they do for me on and off the pitch. Obviously, my teammates and my coaching staff, and the fans for their support this season." 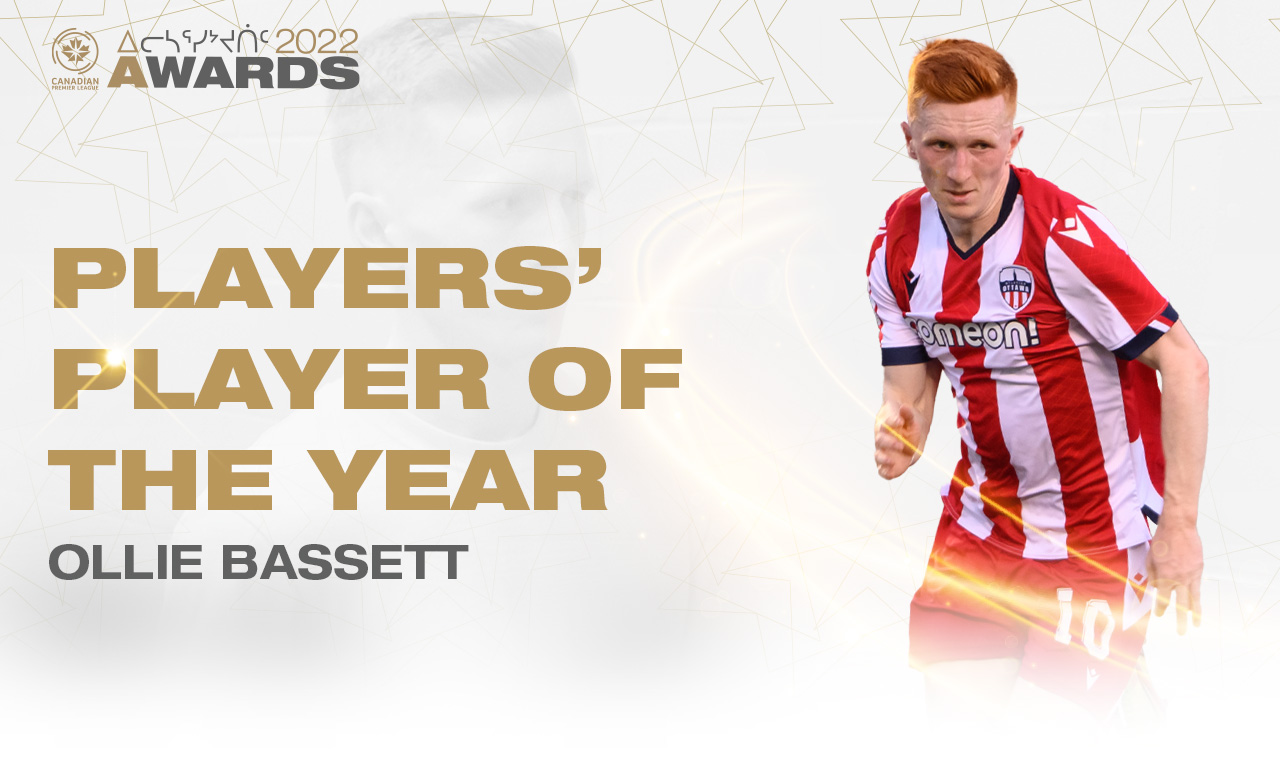 Atlético Ottawa’s Ollie Bassett has also been named the inaugural winner of the Canadian Premier League Players’ Player of the Year award.

"It means a lot to be voted by players that you play against week in and week out, that they recognize your individual success," said Bassett.

Voting for the award took place in early October and a total of 180 players submitted their top three players, with five points awarded to their number one choice, three points for their second selection, and one point for whomever they picked third. Any player who played in the league during the 2022 season was eligible to vote and be included for consideration by the players. Players were not allowed to vote for anyone from their own team, and voting took place strictly based on how the players performed in the Canadian Premier League regular season.

In total, 45 players received votes during a process that saw players meet face-to-face with members of the Canadian Premier League office to give their choices. Here's the full breakdown of scoring:

Carlos Gonzalez – Coach of the Year 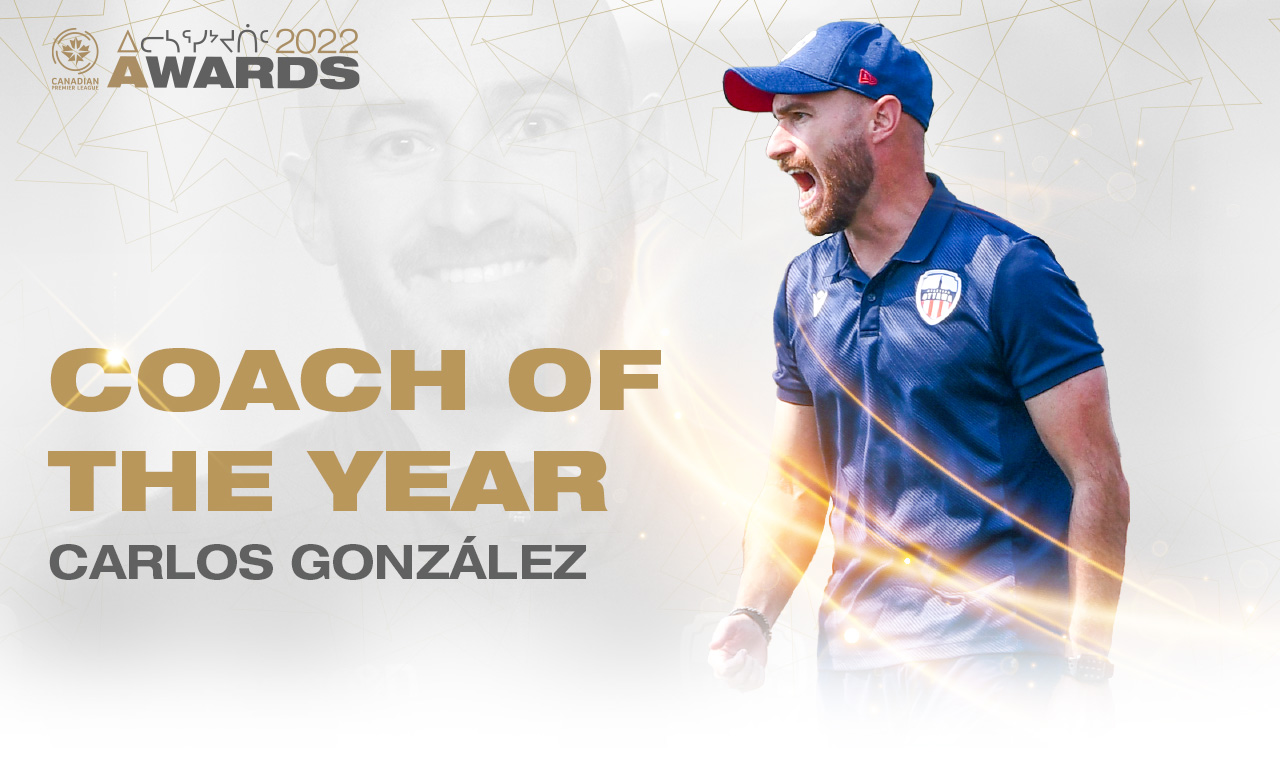 The Canadian Premier League announced on Friday that Carlos González of Atlético Ottawa has been named the 2022 Coach of the Year.

González excelled in his first year at the helm of Atlético Ottawa, having taken over in February 2022. He assumed control of a club that had finished last place in the CPL the year prior, and led them on a remarkable run to win the regular season championship.

“I feel really thankful, honoured and proud,” said González, “The journey has been exciting since the beginning, eight months, it feels like it has been two years now, a lot of busy months…there are some great coaches in this league, so getting this recognition is [big]”.

Ottawa set a club record this year with 49 points and 13 wins, and they established themselves as one of the sturdiest defensive teams in the CPL with just 29 goals conceded — second-fewest in the league.

Under González’s tutelage, Atleti also went on to set a league record with 28 points earned on the road.

The 36-year-old native of Granada, Spain, joined Ottawa after spending a year managing the Kuwait national team. He was also previously part of the Atlético de Madrid academy system, coaching the organization’s U-19 team to the 2019 Copa del Rey Juvenil final.

This year, for the first time, the CPL’s Coach of the Year award was voted on by peers. Each head coach and one assistant coach per team was given a vote, and were not allowed to vote for themselves or a coach from their own team.

Alexander Achinioti-Jönsson – Defender of the Year 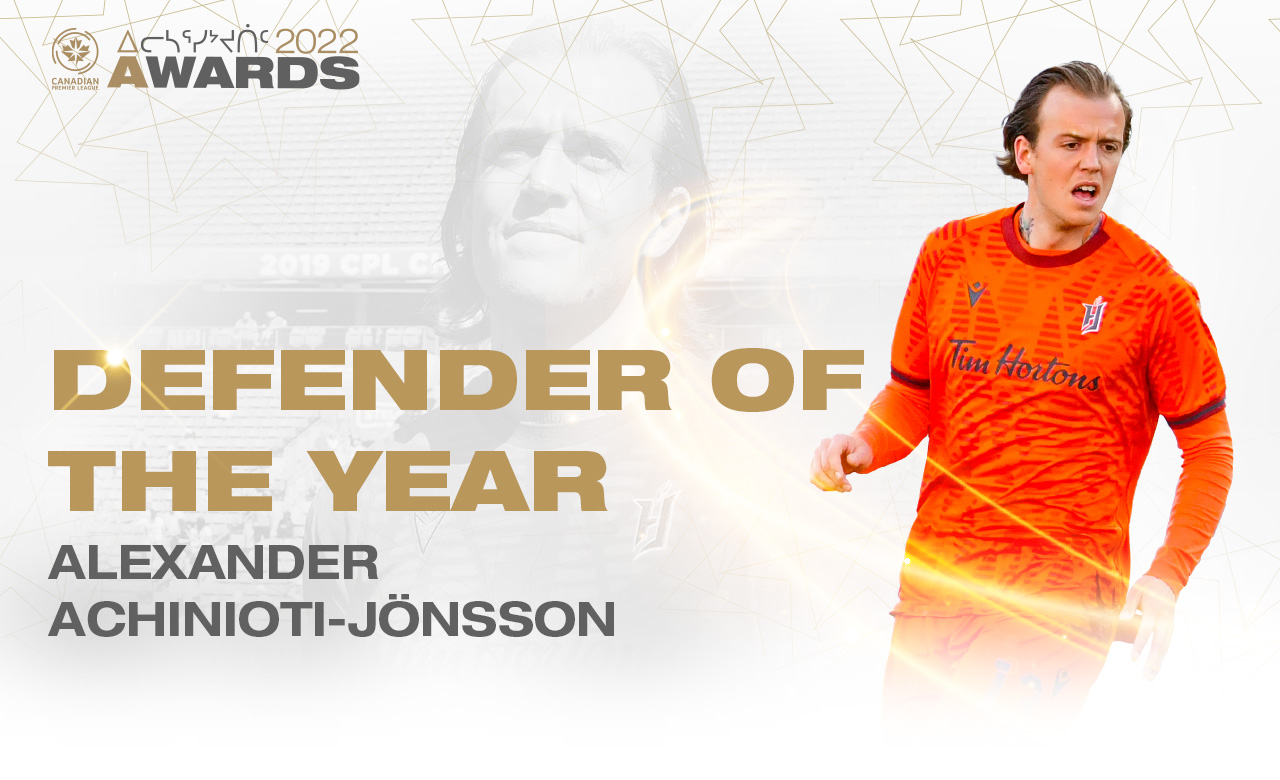 Forge FC’s Alexander Achinioti-Jönsson has been named the Canadian Premier League’s first-ever Defender of the Year.

This new award recognizes the defender voted as the best in his position by media members over the course of the league’s 2022 regular season.

The 26-year-old native of Hittarp, Sweden, naturally a defensive midfielder, was deployed as a centre-back this season by Forge after multiple injuries occurred in the Forge back line.

“Not too bad for a midfielder,” said Achinioti-Jònsson with a laugh, on winning the award, but acknowledged he has grown to enjoy playing the position. “Oh I do, it’s obviously different from playing defender, it took some adjusting to.”

During this season he also hit a significant milestone, as he celebrated his 100th appearance as a Canadian Premier League player in September.

Sean Rea – Canadian U-21 Player of the Year 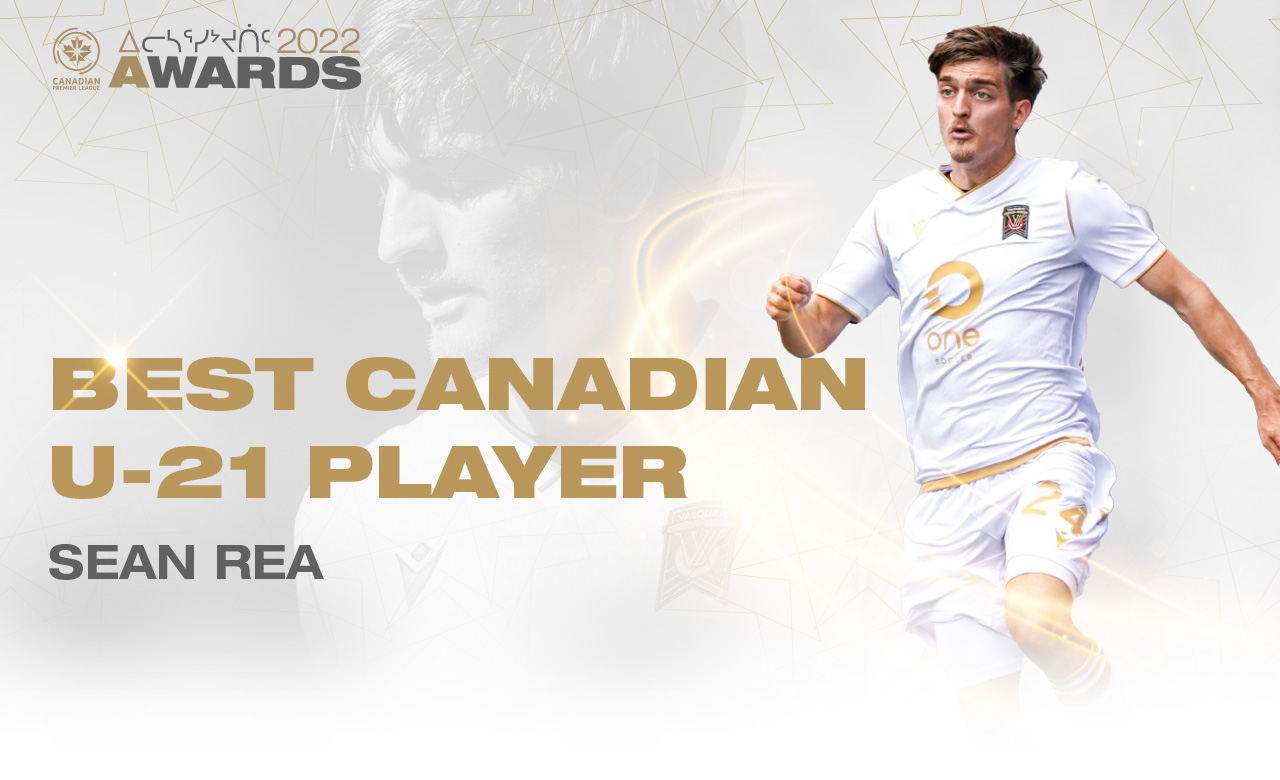 The Canadian Premier League revealed on Friday that Valour FC midfielder Sean Rea has won the league’s Best Canadian U-21 Player award for 2022.

The award is given to the player voted by the media as the best under-21 Canadian player in the league during the regular season. CPL clubs are required to play domestic U-21 players for a minimum of 2,000 minutes each season.

Rea had an outstanding 2022 campaign that included breaking the league record for assists in a season with nine, while also scoring five goals, often in spectacular fashion. He was also the league leader in chances created with 71, which was 28 more than any other player in the CPL this past season. 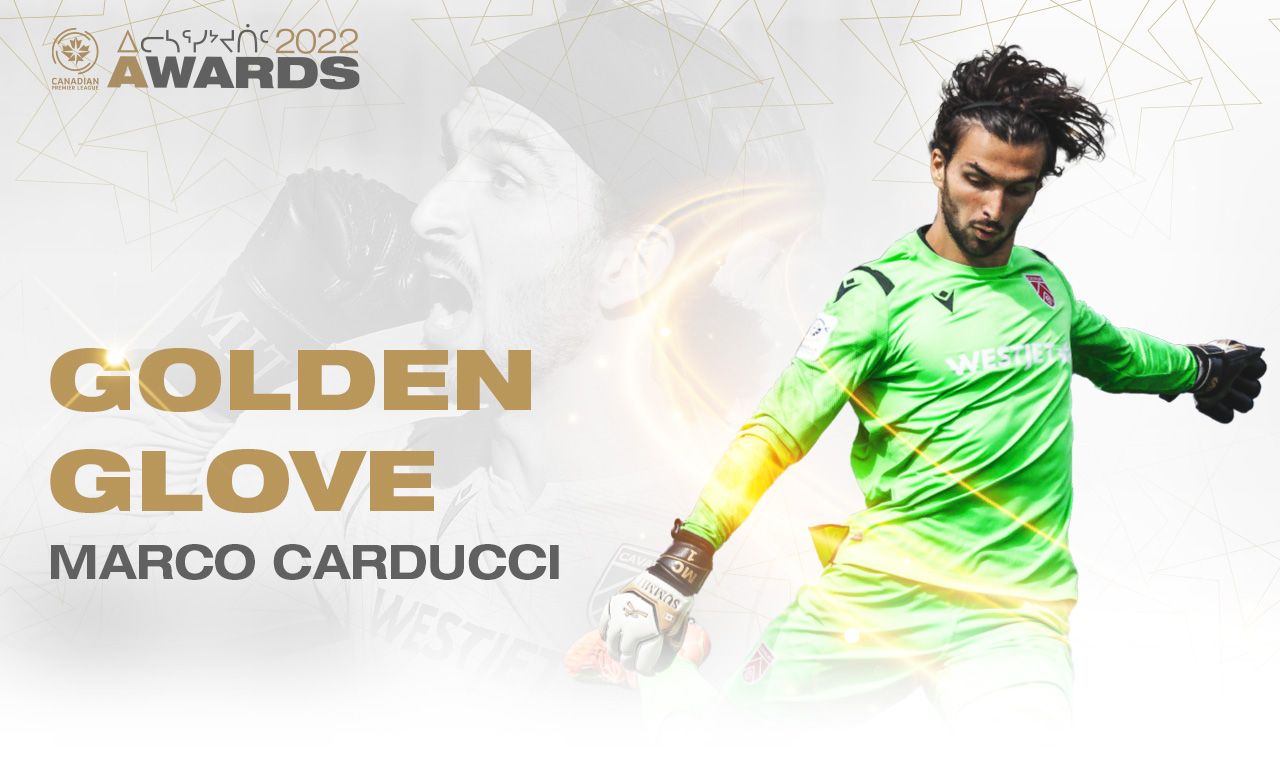 The award is given out annually to the league’s best goalkeeper during the regular season.

The 26-year-old’s accomplishments are even more impressive seeing as he missed much of preseason and the first three games of the year while recovering from a testicular cancer diagnosis and surgery back in February. Carducci returned in time to start the club’s home opener on May 1, keeping a clean sheet during a 2-0 victory over Pacific FC.

This is the second time Carducci has won the award in his four seasons in the league, also earning the league’s inaugural Golden Glove back in 2019. Other past winners include Henry (2020) and Jonathan Sirois of Valour FC (2021).

"I think all the goalkeepers [nominated] would say the same thing," said Carducci. "You are one player out of eleven. So to win this award I’m really honoured, but the first thank you goes out to the guys in front of me."